- May 03, 2019
When I was a young woman I had a very good friend, she was 30 years older than me but we both enjoyed creating with textiles and the age difference between us melted away as we became engrossed in conversation about our latest projects. Flo was energetic and indefatigable. I remember once her husband went to work in the morning and she set to decorating the lounge. She took all the paintings off the wall, moved the furniture and with the help of stepladders (she was only just 5 foot tall) she repainted the ceiling and walls, in the same clean white colour as before. And had all the furniture and paintings  back in place before her husband returned home from work in the evening.

Eventually I moved away and we exchanged letters and occasional calls for many years after that. Her husband passed away and our calls became more frequent for a while but then went back to the occasional newsy letter and the card at Christmas.  I visited a couple of times but it was difficult.. she lived in the far north of Scotland and I down near London.

I don't know when exactly the letters stopped. But they did. Both from her and from me. Then as the long silence set in I became afraid to ask what had happened. So many times I thought about her, spoke about her, thought about calling but never did.

Today I phoned. To hear that she passed away in July 2017.  In March of that year I was actually just a 2 hour drive from her nursing home but I was in the midst of arranging my father's funeral and I couldn't face it.    She had no family and no one at the nursing home remembered very much about her. The very last time I spoke to her she kept dropping the phone and was a bit confused.  I wasn’t her next of kin and I had a feeling that no one would bother to go through her address book to see if there was anyone to inform. I feel crap, I wasn't a very good friend at all, I should have tried harder. Because she was such a lovely person I know I am forgiven, but that really doesn't help. 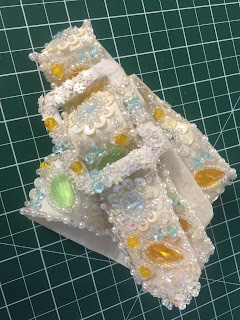 She gave me this belt years ago to wear with an evening dress  that lacked a certain something.  She had made the belt herself. It's not something I am likely to wear again so I am thinking of turning it into a frame for some embroidery or repurposing it in some meaningful way.  I will think about it.  I am very sad and will be for a little while but I hope to eventually be able to feel joy at having had her in my life. She influenced me greatly and  surely that's the best legacy anyone can leave.

life the universe and all that