- November 22, 2018
The weather took a downward turn a few weeks ago and apart from 4 or 5 days of sunshine we've had grey skies and rain for what seems like a very long time.


While waiting I try to work up some enthusiasm for craft work or cooking. This can be hard because when you feel down nothing seems very interesting but I have a strategy that sometimes works. The usual SAD affliction goes like this. I look at some sewing I have planned. The pattern is there, the fabric is there.. almost everything I need is there but the one thing I don't have.. the zip or buttons perhaps will be the excuse to not even begin the project. Even though the missing article is not needed until the project nears completion, the fact that it's lacking will stymie the entire process and I won't even begin. 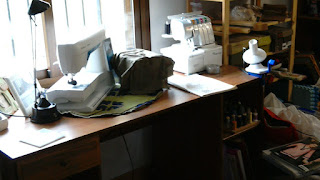 Because I have not been able to make a start on my project I will feel bad/disappointed and a bit of a failure which fuels the glum mood and so the downward spiral continues. 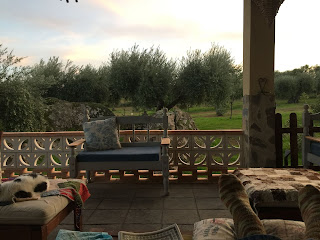 To try and climb out of this is very hard. Sunshine and blue sky helps but if that is lacking then I usually begin a search for something novel or new to spark my interest. I have to be quick though because if I am not then once again I will find a reason not to begin. It's almost like trying to outwit myself.


The kind of things that I like are of course the crafty things like knitting or sewing and practical things like cooking. But your simple run of the mill just won't do it. It has to be a challenge, something new, something to be learned. This comes with it's own dangers because if I try something new and fail then the disappointment can be very debilitating. So I usually choose carefully, something that I should manage without too much risk of failure.

So this week - having put up with the gloomy weather to the point of 'absolutely got to do something' I picked a challenging new knitting stitch to learn followed by firing up the bread oven and making up my own bread recipe. 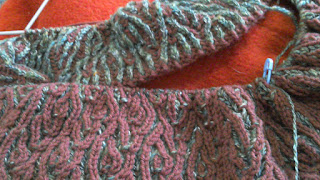 The knit stitch is Brioche - which sounds like bread for the oven but no, not this time. With brioche knitting the pattern is reversible. It's knit with two colours and gives a really interesting texture and reversed pattern depending upon which side of the fabric you look at.  I decided to make a cowl. The pattern called for 272 stitches cast on and since you are unable to tell if it's working out until you've knit a good inch or two.. there was a lot of knitting and then alot of unpicking and throwing away of tangled yarn.  I can't give up. If I give up then the disappointment will be immense. 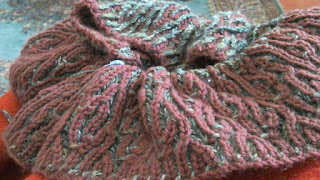 Eventually, after three new starts I have something that looks similar to the actual pattern. I say similar because I made so many mistakes it isn't actually the correct pattern but it looks ok. My problem is lack of concentration.. my mind wanders off on a tangent and before I know it, I've gone wrong again. But I like what I've knit so far.. it looks a bit like worm casts.. hopefully when worn around the neck the reverse side will give it added interest. 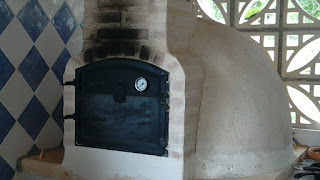 Yesterday I thought to myself  'its been ages since I lit the bread oven' so before I had time to find an excuse not to, I raided the cupboard and mixing lots of different left over flours and adding seeds and a few sultanas I made a bread dough. While it was rising I set the fire in the oven. At first I thought it would take so long to get up to temperature that the bread would be over proved but in the end I put the bread in a bit too soon and the oven was far too hot. 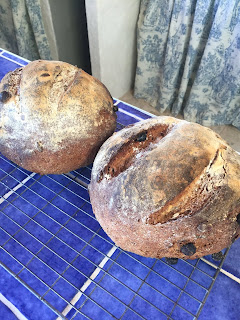 They came out like two cannonballs. Not quite black but sounding pretty solid. It's a wholewheat loaf so it's meant to be heavy.. I wrapped them in tea towels while still warm in the hope that the crusts would soften.   Having resigned myself to a failure and chiding myself for not practicing enough with the oven you can imagine my delight when we sawed open a loaf to find it perfectly cooked inside and most of the crust crunchy but still edible. And delicious. 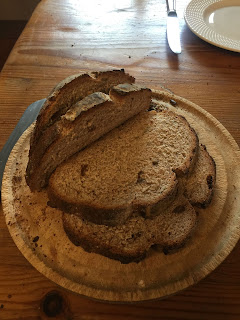 The hearty vegetable soup I slow cooked in the oven after the bread came out is todays lunch. Each little success builds on the last and slowly a ladder is made that will lead out of the doldrums. But the sun will have to come out again if I'm to stay up there.  You can see why I came to live in Spain.. rainy days are few.. but this is the season for them. Oh you thought I was talking about the seasonal C word? No, not until December. Next post perhaps.
Cooking Crafts knitting life the universe and all that Weather