- November 09, 2018
A friend and neighbour asked me to repair a crochet blanket made by her mother. Her mother died a couple of years ago so this is a much loved and very precious item. 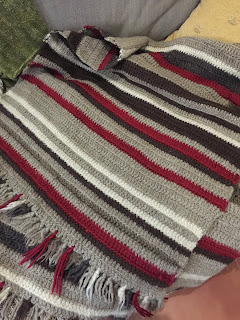 Sadly I didn't think to photograph the damage before beginning my repairs but in summary the blanket contained two different types of yarn: one synthetic (the red colour) and the rest pure wool. It had been washed in a machine - I assume on a wool setting. The result was shrinking and slight felting of the natural wool, with no significant damage to the synthetic yarn apart from pulling out of shape by the shrinking wool. There was also a fist fized hole and a couple of smaller holes along with some unravelling of woven in ends and thinning of the natural wool in certain areas. 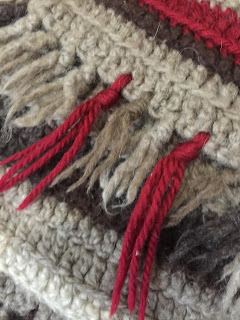 Alot of people think that because your washing machine has a wool setting you can happily put your woollen garments into it. Nope! You can't. The misunderstanding came about because for a very long time now knitters referred to their yarn as 'wool' no matter what its content or where it came from. Wool comes from sheep and sheep alone. Other animals (eg Alpaca, cashmere goats, angora bunnies) produce fibre that is correctly fur or hair and not wool. This type of fibre is yarn. But I digress. In a nutshell - most natural fibres are best washed by hand and only the synthetic blends or superwash wool (wool that has been specially treated prior to purchase) can be washed on a wool setting in your machine. There are exceptions with some breeds of sheep producing hardy fibres that cope better in a machine but this is a more specialist knowledge that usually isn't provided either on the ball of wool or the label of a finished product. 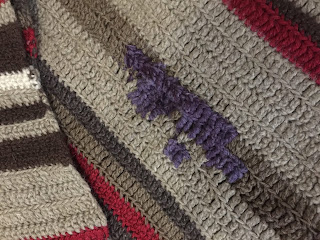 Initially I had thought I could patch the holes in a similar way to darning on a knit fabric but with crochet stitches. I explained to the owner that the wool used would not match in colour deliberately as part of my commitment to the 'visible mending' movement that is a desire to highlight the value of an object by showing you cared enough about it to mend it. And by association you have not thrown it away and purchased new (thereby contributing to the wasteful modern fashion/textile industry practices). It's a kind of gentle protest. It is also contributing to the history of the object and the owner was very much on board with this. 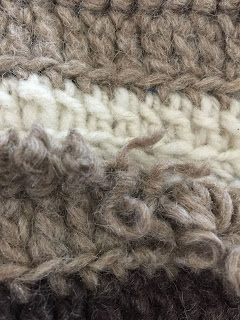 I wasn't happy with the patch. It was bulky and not very attractive and with further washing it would not be very secure. The only other option was to take out two of the striped sections entirely and then rejoin the two pieces. This would mean taking out not only the damaged section but also a portion of good intact stitches as well. Being very aware of how precious every single stitch was I hesitated. But only for a moment.  I calculated that the finished blanket would be perhaps an inch shorter than the original but that I wouldn't need to patch any other parts of it and it would be virtually an invisible mend. I decided to go for it. 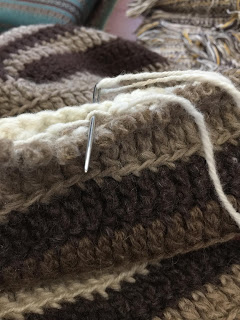 It's a very nerve wracking thing to take scissors to someone else's treasured textile. But as I worked I thought about my friend's mother and the time I met her before she was sick. She didn't speak much English but she appeared to follow the conversation well enough and it was a very pleasant afternoon. I began to feel like she would have approved of the repairs. 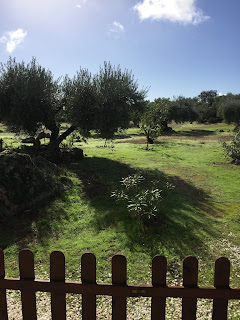 It was a bright but chilly day and the blanket kept my legs snug and warm as I worked. When I finished crocheting a new insert I sewed the pieces back together and then put an extra crochet edging on the sides to tidy things up. 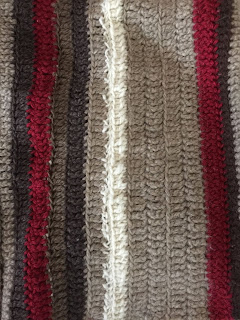 One last close inspection revealed a knot in the wool that was starting to loosen. It wouldn't take much wear and tear to pull it apart and then there would be another hole or worse.. a great unravelling. 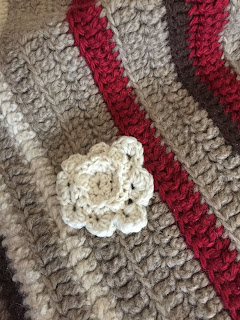 I secured it with a couple of stitches and then covered the spot with a small crochet flower. So I ended up with a very visible mend after all. 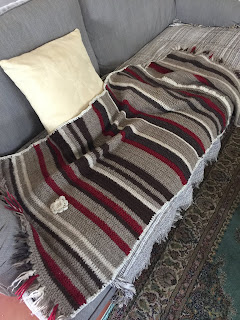