- December 30, 2017
Looking back on my prediction for a lean harvest due to lack of water, heavy pruning last year and just the inexplicable whim of mother nature - well, how wrong was I?! 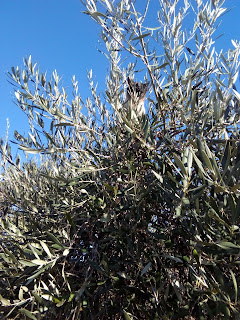 Firstly I wanted it all done and dusted by the 21st - our Yule celebration, that didn't happen. Then I said we should finish by Christmas day, that didn't happen. Then I declared longer working hours and finishing by New Year... There's a trend here. Yes you are quite right, that isn't going to happen.  So now I've predicted another weeks worth of  work but I suspect that if we don't really pull out all the stops we may still have olives on the trees after that. 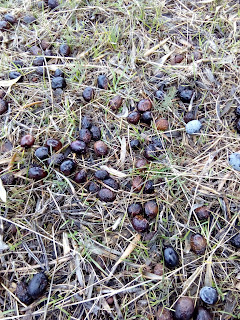 Clearly I am no gypsy fortune teller.  This is probably about as hard as we work on the finca. It's usually only 2 -3 weeks intensive back breaking slog and it's done. This year is different. We had help to start with but because I was doing arty stuff and cooking that meant there was still only 2 people doing the olives. We should really only take couples for harvest time. We are now well into the third week and still no where near finished. Necks ache, backs are groaning, arms are sore, the dishes mount up by the sink, there are about three wash-loads of clothes waiting to be done. The house hasn't been hoovered for a fortnight and the freezer has come into its own with all those autumnal soups (many of which I thought were just taking up space and that we wouldn't eat them) providing quick and easy sustenance for too tired to cook people. 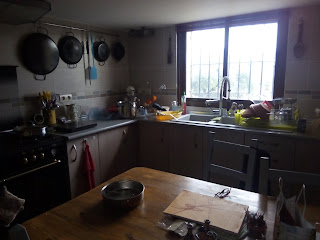 My brother listened to me complain about my aching limbs and then launched into a lecture about being retired and taking time out for ourselves and not being stressed. I realised that I have been giving the wrong impression. There is this aura that surrounds the word 'work'. It implies something that we don't enjoy or an onerous task. The olives are certainly not that. They are just something that we do at this time of year. Something that requires a real physical work out. It's hard and it is work and at this point we want it to be finished but we don't hate it. 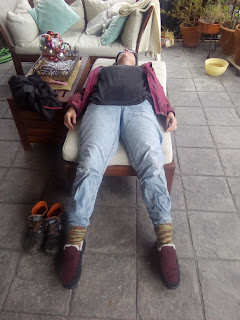 There is beauty. Even when it's damp and misty. It can be cold but thermal underwear and waterproof trousers help enormously. 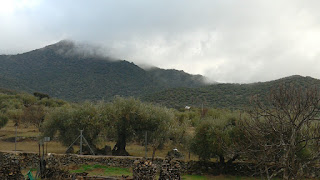 It's an opportunity to get really close to the trees. I can't stop photographing them from different angles, they can be so striking, and well, magical. 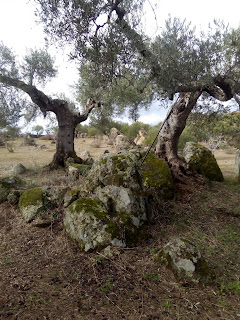 There are funny moments like the rabbit disturbed by one of the cats that bounced around the nets several times totally confused before bouncing off out of sight leaving us and the cat open mouthed in surprise.  Or the giant cricket that flew up into my face in an effort to escape the olive net. 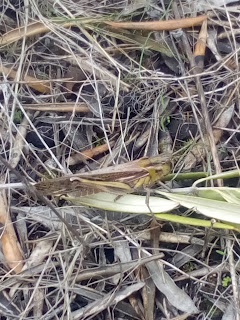 There's the way the lichen grows on the rocks that I am unable to quite catch the beauty of with the limited capability of my phone. 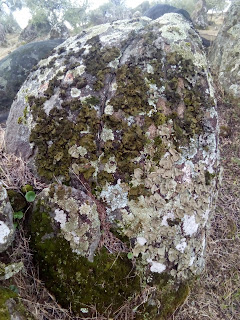 Our feline companions who don't understand what we are doing but think chasing cascading olives is a good game. 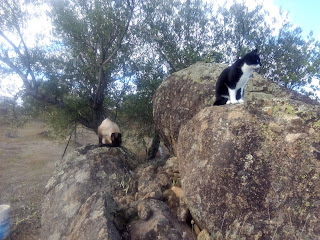 And our faithful supervisor who is too spoiled to sit on the ground and must have his own chair and blanket in case of early morning chills. 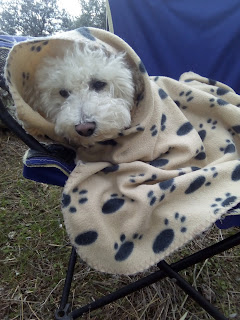 And then there is the two of us. Best of friends, reminiscing about the past, planning for the future. Discussing a film or book we've recently seen or read. And when we wend our weary way home we feel like we've had a good healthy workout at the gym and our aches and pains have a purpose and a satisfaction to them. 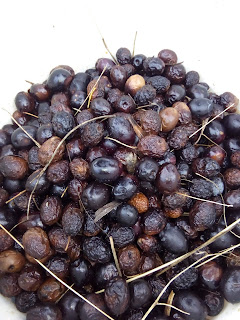 Oh yes. This is an exhausting time of year but the best bit is still to come, the finish is in sight and the speculation about the price for the olives is running wild.  Some of our olive money is earmarked for spending on wood for the next couple of winters but if it's a good price we shall have a surplus. Ooooooh what to spend it on???? And what could be more exciting than that!?
cats Chit Chat Farming olive harvest Spain The Dog Volunteers