- September 23, 2017
No sooner than I express the desire to be a textile artist than it happens! Just like that!  Well actually no, not quite. I had been expressing the desire for quite some time before posting on my blog and when friends alerted me to the fact that the village was looking for artists of all kinds to put on an art 'thing' during the month of November I jumped at the chance. No that's a lie. I hesitated big time for several reasons - the main one being that I didn't and still don't understand exactly what this 'thing' is. 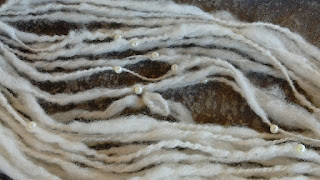 Anyway after some persuasion by friends I submitted a proposal which was sent off with lots of others to the powers that be - apparently more than one town is participating in this Art Container (that's the literal translation, yeah, don't ask me!).
Anyway to cut a very long convoluted story short, I have been allocated three small rooms within which to mount an exhibition about the Wool of Almoharin and demonstrate the process of how it becomes yarn and finally... Produce a piece of art that the community (general public) has contributed to during the course of the exhibition. 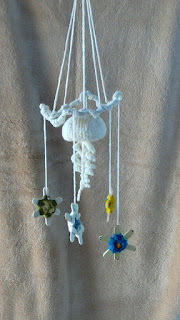 After my initial Wheeeee! moment when I realised that I hadn't actually got a clue what kind of joint art installation me and Joe public were going to produce the horror of what I've done sunk in. 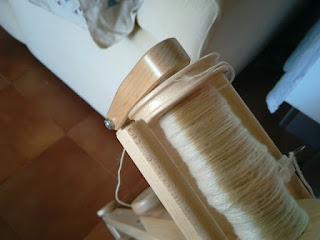 The powers that be wanted me to teach people to make yarn - just as they are passing by and produce a giant ball of wool at the end. After explaining that it takes many hours of practice they agreed that I would produce the yarn and the general public should make something with it. 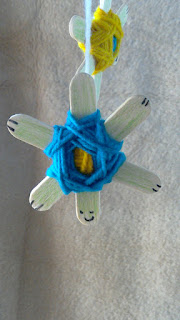 The best I've come up with so far is stick weaving - making turtles which would be included in a mobile, something along these lines... 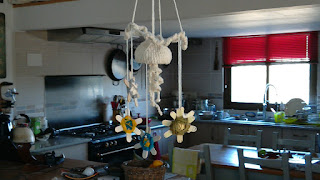 I would do the vaguely fishy themed creatures and perhaps, hopefully, other people would make turtles and perhaps stars to contribute to an ocean themed final installation. There is much to consider - will people want to make turtles? Will they want to take the turtles home? (well you can't!!), Will enough people want to make turtles? Will there be too many and will I run out of supplies? Have I enough wool? Have I enough time to process more wool? Can I put hooks in the ceilings of these rooms? The questions are pretty much never ending and the answers seem to elude me. 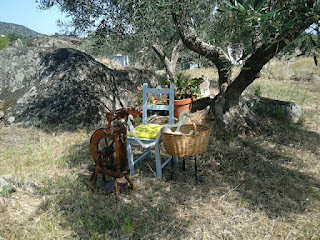