- May 07, 2017
My fleece cleaning experiment has come to fruition. I checked on the bucket every couple of days and apart from the water turning brown nothing much seemed to be happening. On day six there was a white-ish film on top of the water but still no bubbles that I had been told to expect. I decided to leave it an extra day, after all, we had some rain and dull days with temperatures below 20C and arguably, just like with sour dough, the fermentation is temperature driven. 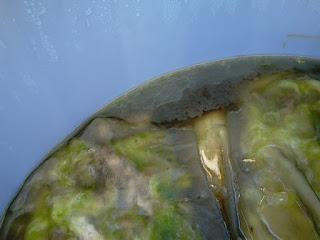 On day 8 the bath was smelly, not overpowering but enough to attract the flies when the lid was off, what my father used to call 'a good fresh farmyard smell' all the while smiling and holding his nose. It still had the white scum on the top and no bubbles. I thought I would extract a small amount of fleece and rinse it to test if it's ready or not. 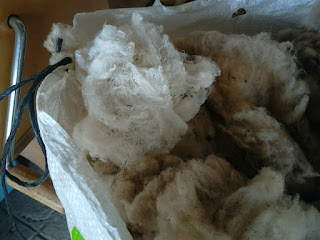 Oh my, what a surprise. I know the science behind it but it feels like magic all the same. Here I have placed the little scrap of clean fleece on top of the bag of dirty unwashed fleece. The difference is amazing as you can see.  So I decided it was ready and I lifted the whole lot up onto a rack which I rested on top of the bucket. Almost instantly the flies descended, not good. 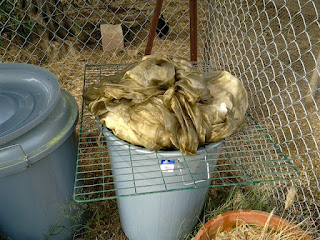 So I had to try and squish the excess Suint-water out of the fleece quickly and get the lid back onto the bath as fast as I could.  The fleece was then spun in the washing machine - that was not good either, firstly the net curtain did not contain all the fleece and secondly I had not been as careful as I thought about removing ALL of the sheep poo.  Sheep poo is really just grass since sheep don't eat much else, but all the same, when wet its green and slimey and the tiny amount I had overlooked was now spread around the fleece. Sigh. 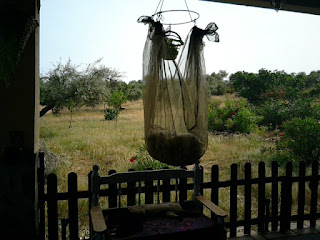 Since no detergent has been used the fleece still retains the natural lanolin. This makes the fleece slightly sticky to handle and there is a hint, barely, of sheep smell remaining. I am not sure if I will get on with 'spinning in the grease' as it is called in spinners parlance. It's certainly a different experience from what I am used to. However I do like how soft my hands feel after a spinning session so I think I will persevere for a while anyway. The update on this is that I won't. The combs, the hackle, the wheel as well as my hands become coated in lanolin which later hardens up and makes combing very difficult - only my hands benefitted from this experience. 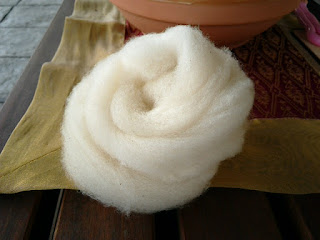 I have a second Suint Bath on the go which will be ready to rinse today, however it is raining and I don't see the need to stand in the wet rinsing fleece, so I shall leave it another day. I have added a subsequent fleece to the brown smelly water in the first bucket. According to other bloggers experiences this and all further fleeces should only take two or three days, certainly as temperatures rise here as summer approaches the process could get very fast indeed. I would aim to have all the fleece cleaned before the height of summer and although the Suint water can be kept indefinitely, apparently, I will use it on the garden and start afresh every spring with the arrival of new fleece. 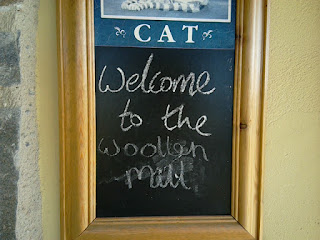 Here is my first hastily prepared (hence the uneven-ness of the yarn) sample of yarn, spun in the grease and subsequently washed in detergent. It's a shame I don't like spinning in the grease because yarn is easier to wash than fleece but it seems that although the Suint Bath appeared to be a dream come true - it isn't, quite. But it certainly is a better experience than the last time I tried washing this much raw fleece! 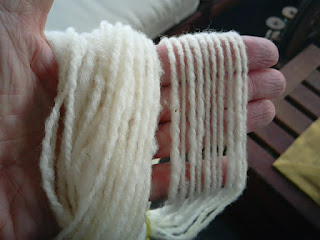