The End of an Era

- March 20, 2017
Well it came. The phone call I was dreading followed by the rush to the airport, the long journey home to Scotland while a lifetime of memories played and replayed themselves in my mind. The spring planting was left to Steve, the dog and the cats, so central to my life, forgotten, relegated to the sidelines. All thoughts focussed on only one thing, getting home in time.

In the end I had plenty of time. My dad lived for another week before pneumonia (what was once called the old man's friend) stole him away from us.  He had said everything, we had said everything, there was nothing left to say. We began repeating ourselves. I watched as various family members arrived still hoping and then struggled to accept what we already knew was to be the only inevitable outcome.


My stepmother, stepsister and I became sisters in the true sense as we sat with him through those long hours holding his hand, cooling his brow with a cold damp cloth and moistening his lips with ice cubes on sticks. Finally, at 11:30pm on the 12th March he took his final breath and was released from the physical. For us mere mortals, left behind, It was alarming, profound, a whole gamut of emotions, too strange a feeling to articulate at the time or even now. Hard to believe that someone who occupied so large a part of my life was no longer in it.

We deliberately planned a wee while before the funeral in order to accommodate our diverse family scattered across the globe to gather themselves together for, probably, one last time. There are not many of the old ones left, of his generation he was the last. 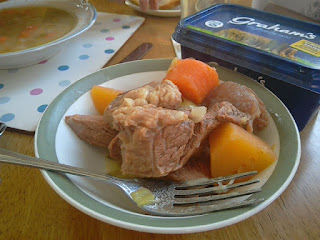 There are memories of my childhood, tattie soup with the boiled beef eaten later for tea with bread and butter. 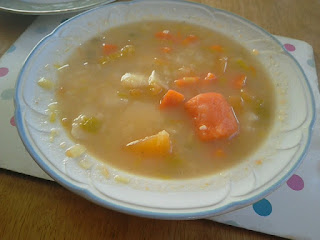 There are people who know me, people I have forgotten. There are family stories, some we all know and still we laugh as if this is the first time we had heard them. There are revelations that are new and old questions find answers. It's mentally and emotionally exhausting.

I am sat here watching a bleak and cold Scottish spring come to bloom while my finca throws up its annual show to temperatures in the 20'sC without me.  Steve sends me photos of the Broom in blossom, I have only to close my eyes to smell it's coconutty scent. Of the vegetable garden newly planted with this year's choices.  Our alfresco lunches in embryo set in neat rows and I ache to be home.

Next week this will pass into our family history and we will pick up the pieces of our lives and move on. Right now I can't imagine where I would rather be than in Spain on my finca with the flowers and the insects and the animals and where all will be well.


Family life the universe and all that spring