A Monster of a Week

- October 11, 2016
Spinzilla ran from the 3rd of October until the 9th October.  This is the spinning competition for charity.  The goal was to spin a mile or more during the week.  I had no idea how much I could spin, whether a mile was a long way, it seemed like it might be, or not.  At any rate I wanted to try. 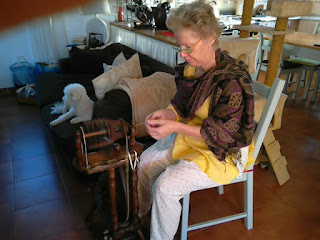 I joined a team which was loosely based in the States with one member in Canada and me over here in Spain being the only foreigners.  Team Heavenly Handspinning.  When I joined I didn't realise that most of them were using what is called an e-spinner.  that is an electric spinning machine that means you don't have to use your feet to treadle, which is a brilliant idea, especially if you are unable to use your feet or are perhaps disabled in some way... or just plain looking for an easier spin.  After a few days at the wheel I was starting to see the advantage. 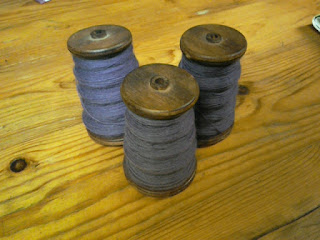 I averaged about 12 hours a day on the wheel.  No point in doing this if I wasn't serious right?  Steve handled all the cooking for the week and apart from one day when I quickly chased a hoover around the floor, no housework was done.  I learned so much during the week.  I learned that I should have prepared better. 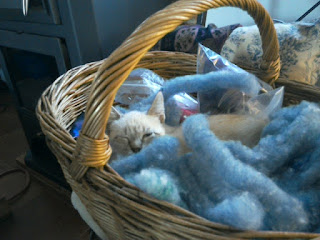 I should have sampled what I was going to spin before Spinzilla started and written it down.  A proper project plan for each different fibre would have taken very little extra time and would have ensured that I got what I expected at the end of the week.  I had hoped to get enough yarn spun to knit a striped cardigan. 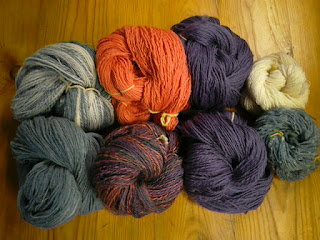 Well I did spin 4.8 miles of yarn which is certainly more than enough for a cardigan, trouble is, the thickness of the yarn varied so much, only because I wasn't really disciplined enough and was looking at mileage rather than quality, that I am not now sure if I can knit all the different colours into one garment.  My technique certainly improved and without this marathon week I might have taken a very long time to get this much better. More discipline is needed. It's good that I learned this. 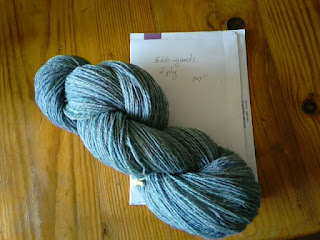 it was also huge fun sharing progress with others on a daily basis and admiring other peoples efforts which were often better than mine and just made me that bit more competitive than I thought I was! 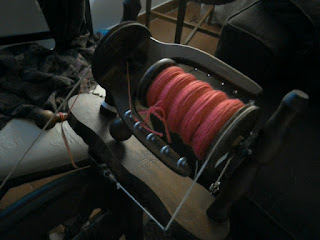 All in all I had a great time.  Was super glad when it finished though.  I'm now quite exhausted and still spinning in my sleep at nights but looking forward to turning my yarn into something I can wear.  Which will definitely be a cardigan or a jumper for the chilly autumn mornings we are having.  Chilly mornings that I love!! Just a little rain now for the to turn the grass green and life will be perfect. It's forecast for tomorrow, so exciting, I hope it's a really good wetting!  I'm getting more like the local farmers as time goes on! The olives are looking very small and wrinkled, they need a good soaking to plump them up.


And to put the cherry on the cake, today the courier is bringing me an unwashed Jacobs fleece. It's coming all the way from the UK.  By donkey I think, the length of time it's taken to get here, can you tell I'm very excited. The project plan for that is a waistcoat for Steve!

In other news, Musby our little rescue kitten is settling in well. Bonnie and Clyde have taken to him, if not the older cats. He's gaining confidence but is still a little bit wary of us. Slowly slowly does it.