- September 30, 2016
I have to tell you a little story.  We went to our local town to do a little bit of shopping. Parked in our usual spot by the church and set off on foot. Suddenly Steve points to the road and a tiny lifeless body of a cream coloured kitten lying in the road. Oh dear I said and made a move to walk away but then stopped. I can't I said. I just had to check if it was dead. It hissed and spat at me as soon as I touched it but made no move to run away. 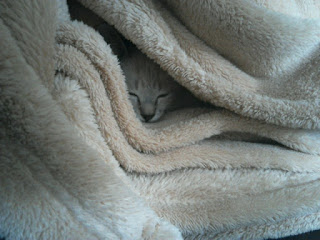 I asked some passing Spanish women if they knew who owned it. They didn't. While we were chatting another cat shot out into the road and was hit by a car! WTF!!!!?????

The second cat was bigger and tabby. It crawled under a parked car. I noticed that it had a collar so belonged to someone. So I concentrated on the kitten. Steve got a bag from the car and I lifted it into it. Told the watching Spanish which vet we were going to and off we went.

The vet checked the kitten over. It appeared to be blind and unable to walk. We felt very sad. Then two Spanish ladies arrived with the other cat which they proclaimed was the mother. It turned out to be male. About 8 months old. And was only bruised, it's owner came forward after pictures were posted on Facebook. 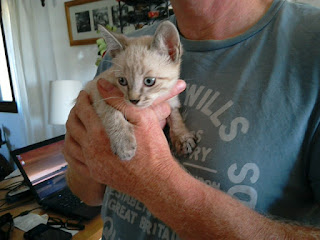 After X rays established that kitten was undamaged he was put on medication for a lung infection. A day later his sight returned and then slowly he regained full movement. No owner came forward. He was very scared and hissed at everyone and everything. 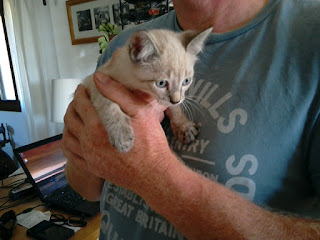 After a week of hospitalisation we took him home and called him Musby. As in 'we Must Be mad to take on another cat'. He's been with us four days now and his spitting has got much less. He is playing normally and although timid wants to be friends with the other cats. The other cats are not impressed. Slowly does it. 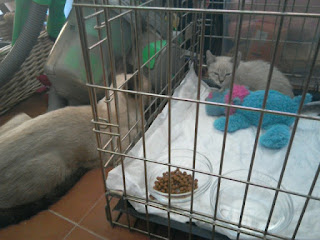