Getting Ready for Spinzilla!

- September 16, 2016
I mentioned a couple of posts ago about another event happening in the textile/fibre world.  Well its called Spinzilla. Its happening in early October and all you have to do is spin a mile of yarn in a week.  It costs ten dollars to enter but the money goes to a charity that teaches textile art to children worldwide so its a good cause and ten dollars wont break the bank.  So what do I get for my money?  I get to improve my spinning hugely... can you imagine, after spinning a mile! I also get a certain amount of satisfaction, whether I manage to actually spin a mile or not, and I get the support and encouragement of the online spinning community.  Here, where I am pretty much a lone spinner, that sort of thing is quite important. 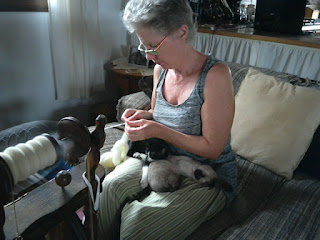 So, before I can even contemplate spinning a mile I have to prepare loads of fibre ready to spin.  As well as the local fleece that I have washed but not yet combed, I have been given some bamboo fibre in blue and green and I have some bought merino in a peach colour and some in a mauve.  My plan is to blend the bamboo with the local fleece and/or the bought merino to make a nice skin soft yarn to knit a cardigan. 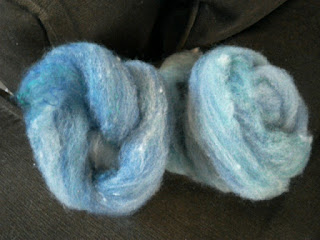 I'm still fairly new to this sort of thing so getting to grips with the drum carder, the combs and the hand carders is another benefit of Spinzilla.  I am already feeling like I know alot more than I did before. 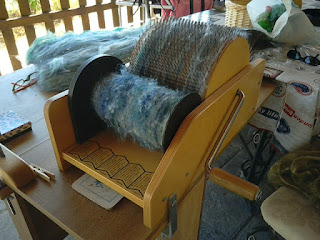 And since most of this work is taking place outside I am so happy that the weather broke, we had a good shower of rain and the temperature plummeted 10 degrees to a wonderfully comfortable 24C.  It is set to go up again by next week but for now this is the best place to be in the entire world! 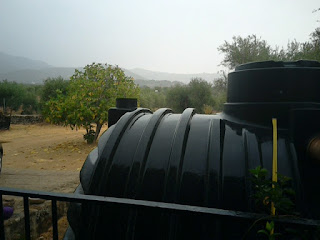 We also got to the bottom of the last bucket of dried figs to be sorted and now await a phone call from the Co operative.  they do it in alphabetical order and we are listed under S for Steve.  Last year it was late October before we got our call.   So here's a little minute of film showing how we sort the figs.  Well you can't see close up and in the film I am very slow... i'm not usually, but even if I was, hey, when its just such a lovely day!