Dying to Try It!

- July 14, 2016
It's more than a year since I learned to spin and received my first raw fleeces from the local shepherd.  Of course I always had in mind the finished article, a jumper or a cardigan in wonderfully natural muted shades... from start to finish... all my own work (except the rearing of the sheep of course!).  Well.  yes I am still on that journey.  I had expected to be a little quicker at it but all in all things are on track. 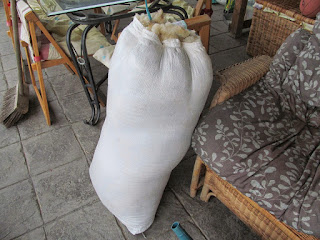 The latest steep learning curve is dying the wool.  I am not nearly ready with enough spun wool to make a jumper but I simply could not wait to start experimenting with natural dying.  So I decided to dye a few small sample skeins and perhaps some roving since a years spinning of white and off white wool has become a little monotonous... a change of colour might be fun. 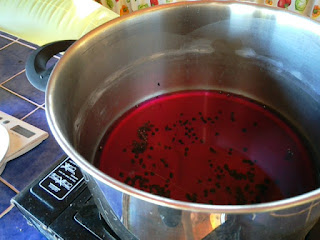 I decided to use the cochineal that I ordered from the Canaries (yes its Spanish so I am staying as local as I can!).  It's very time consuming.  And once I began I realised that when the instructions said Cream of Tartar they didn't actually mean the edible stuff you get in the baking section of the supermarket. 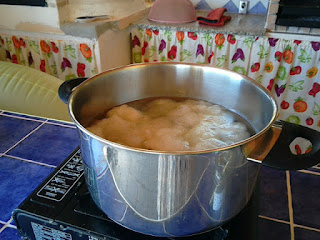 So I mordanted with Alum without adding the cream of tartar that all the recipes call for.  This may result in a less fixed dye.  OK so if I knit something I can't wash it... so be it! 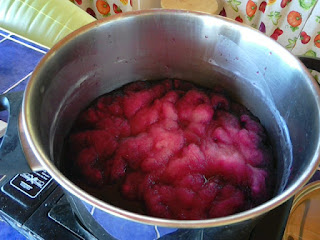 I also ignored the bit where it said you need soft water to dye cochineal.  We have water from our well and its mineral water more or less so I guess thats hard water.  Oh well.  The initial colour in the dye pot was amazingly dark.  Wow.  If my wool turns out like this I shall be cocka hoop. 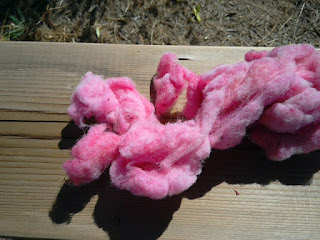 Oh well.  it looks like the hard water did affect the dye.  Apparently the dye adheres to minerals in the water rather than the wool... and it looks like that is what happened.  All the same, its a nice colour.  Its not white!  I haven't washed it yet though so I suspect it will fade even more.  Meh... 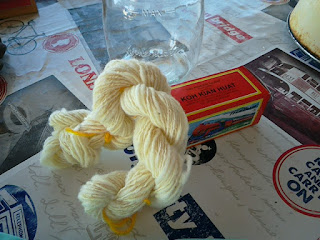 I also did a little experimenting with solar dying.  In spite of my impatience I do have plenty of time and plenty of sun so why not.  Mordanted (imperfectly mordanted) wool.  Finished skeins this time (albeit gash stuff that is destined for something quite lowly).  where was I? Oh yes... mordanted wool is placed in a glass jar with the dying substance and left in the sun for anything from a few days to a few months. 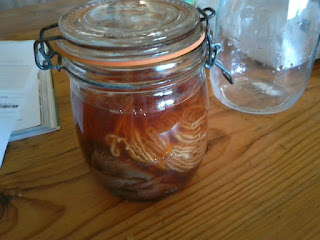 I made some tea using a makeshift tea bag (muslin bag tied up with tea in it) and some rather interesting tea dust that my brother brought back from China.  and I picked some just past their best flowers from the Oleander that is blooming at the moment.  yes I know Oleander is poisonous but I do not intend to eat it, or any part of the wool that I dye with it. 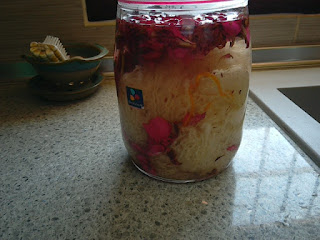 The copper and iron solution that I made a year ago is patiently waiting for me to experiment with modifying dye colours.  Except I really haven't even sorted out mordanting the wool properly yet never mind advanced experiments of this kind.  So. Hopefully this little foray into dying will  suffice until a. the proper cream of tartar arries from the UK and b. I have enough wool spun for an actual project. 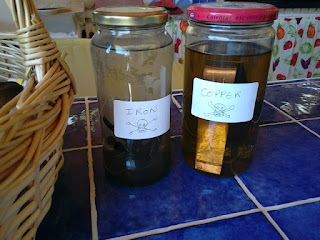 It's been kinda cool not knowing what the end result of this will be.  And not an issue if it didn't turn out quite how I expected.  It's how I learn best, trial and error and after all... No one died... groan.