At last! The Garden Produces...

- February 15, 2016
some of my regular readers will remember that I have, on several occasions, lamented the paucity of our soil here for growing vegetables.  Well we focused on trying to improve it by firstly adding chicken poo and then sheep poo and finally we got some organic cow pellets to spread about.  We began this journey with the veggie plot nearly two years ago and although the first year we did fairly well for veg, it was mostly courtesy of the goose water which was heavily laden with poo and poured onto the patch on a daily basis.

At the end of last autumn I planted some winter veg, some peas, some cauliflower and some broccoli.  They all seemed to thrive really well.  Everything grew quite big and became very very leafy.  However it was all just leaf, no pea pods and no broccoli or cauliflower hearts for weeks and weeks and weeks.  The cause according to Google - for the broccoli and cauliflower was that the weather was too warm.  I couldn't do much about that.  For the peas...?  Who knows... lack of bees? 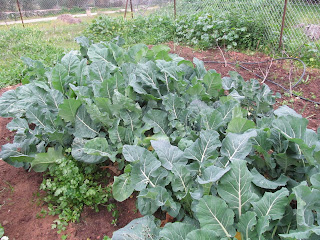 Finally... I have been able to harvest some veg.  The broccoli produced really well but I didn't plant enough really.  Just waiting on some side shoots forming now. 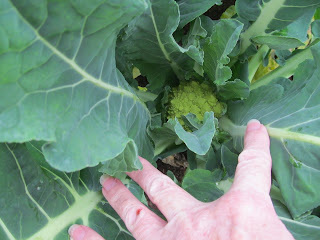 The cauliflower is delicious.  We ate a couple when they were a bit small, they were delicious and we still have more to come.  But once again, not really enough if we want to be self sufficient in veggies, but it was more of an experiment than anything else since I didn't know if the soil was adequate or not. 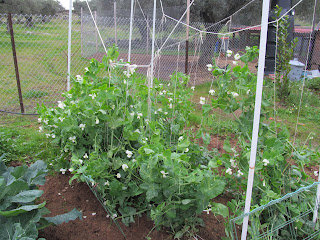 The peas.  Well what can I say?  I did eventually get a couple of pods (only two...) and they are still very flat but the recent wind and rain has beaten them all down and any attempt to prop them up results in broken stems so I think I shall have to give up on them.  I will just let them sprawl and if I get any peas, well great, but if not then it's not entirely a wasted effort, I did learn that I should perhaps look for a dwarf variety in future and I think peas like beans add nitrogen to the soil, am I right?  Not sure and don't have time to look it up but if that is the case then its all good. 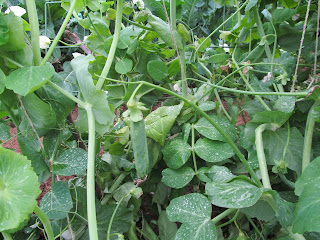 The lettuce is almost ready - although I have already harvested some of it as baby lettuce - very nice. 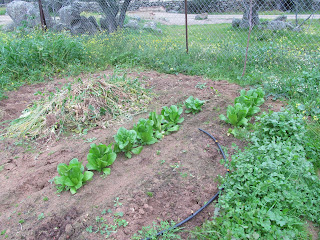 The coriander thrives really well almost all year, only the really hot summer sees us go without.  It self seeds and apart from a little weeding I don't have to worry about it.  A really easy herb to grow here. 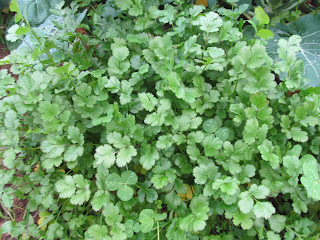 The peach tree is starting to bud and I noticed the apples, pear and cherry is also budding.  the plum hasn't done anything yet but I think its a late starter. 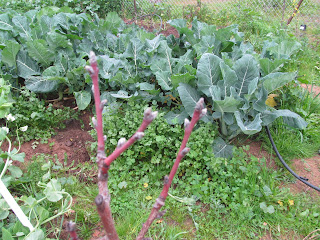 I salvaged a couple of chilli peppers from the weed pile, they were pulled up last autumn but ripened anyway.  They are now drying in the kitchen. 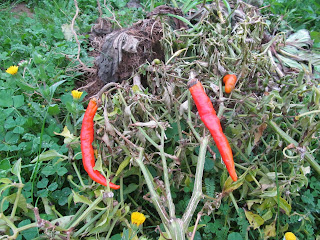 The garlic is coming on too - these were swapped for eggs with friends who had bought too many. I like the barter system, its a win win for everyone.  Its hard to know how the garlic are truly coping with all the wet weather recently but I managed to grow a lot of garlic in the UK and it was much wetter there so we shall see in due course. 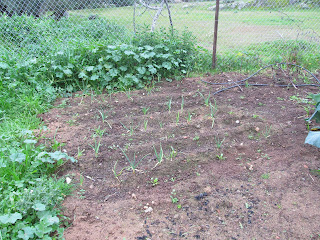 Judging by the height of the weeds on the patch the added manure is definitely doing its stuff. 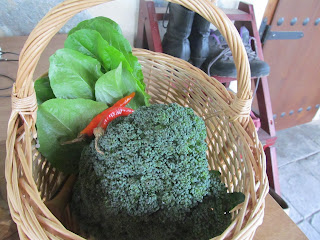 I wish I had planted more veg now but at the time I felt that it was a lot of wasted effort if the soil was still as poor as before.  But I am heartened by these few successes and so I am off to surf the web in search of interesting veggie seeds.  The goal is to fill the patch this year.
Gardening Weather What is a Technobilly?