Well that was Yule! 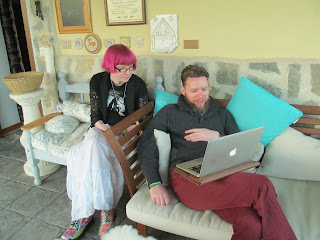 This was cause for great excitement, last year we were on our own and to be honest it was a little strange - well after thirty years of having a large noisy family at Yuletide it was odd to be just us. 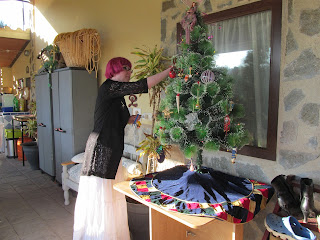 The olive harvest continued until the last moment, the trailer turned up (Hoorah!) and we sent 1,154kg of olives down to the Cooperative.  There are still a lot of trees with olives on but they will have to wait until the New Year.  We finally put the tree and decorations up just two days before Christmas day. 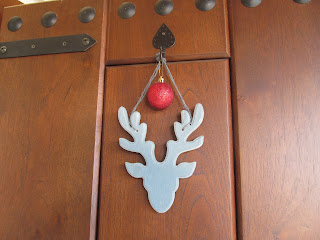 I had a bit of a shock when I picked up the turkey.  For the last three years we have had our own geese and haven't had to worry about the centrepiece of the Christmas lunch. 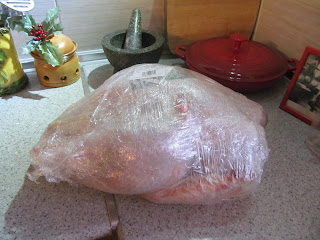 This year I ordered a turkey from our local supermarket.  I vaguely remembered that when the children were little and grandparents were invited for the special day I would order a 10lb turkey. 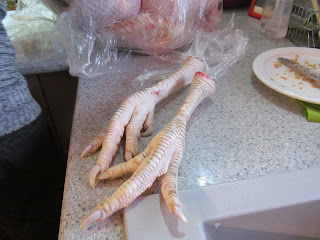 Since I had organised a Boxing Day left overs party I thought I would order the same size bird to ensure that I have left overs. 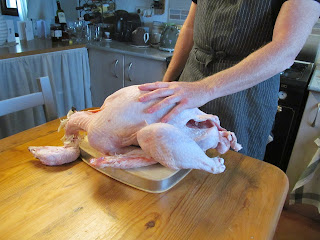 As the shop assistant brought the turkey out I realised my mistake.  I had ordered a 10kg turkey and it looked more the size of an ostrich!  I felt a little foolish but paid for it and said nothing out of the ordinary to the shopkeeper.  By the time I got it home a plan of action was formed. 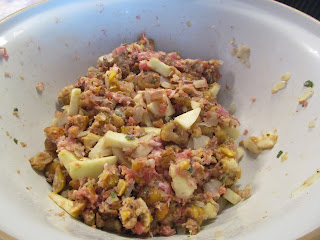 It was too big for the roasting tray so I asked Steve to de-bone it. And then cut it in half.  The boning always feels a bit like you are destroying the bird but its worth it because once it is cooked it is so easy to carve and its all meat. The internet abounds with instructions for boning a bird.  It isn't for the faint hearted but all you really need is a very sharp suitably sized knife.  This makes a world of a difference. 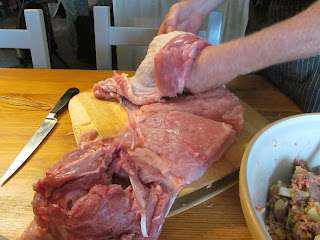 We stuffed each half with a mixture of sausage meat onions, dates, apple, sage, salt and pepper and cinnamon. 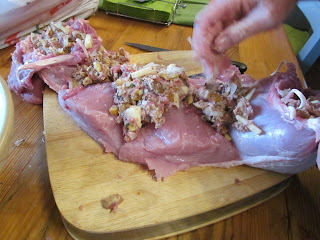 And we sewed it up into two neat (if odd looking) parcels.  One was frozen for a later date. 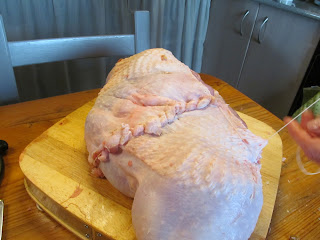 The other was weighed and then slavered with butter and put in the fridge ready for roasting on Christmas morning. 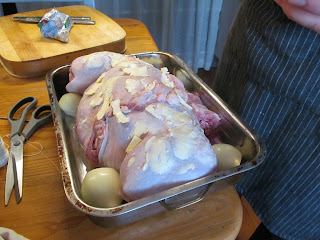 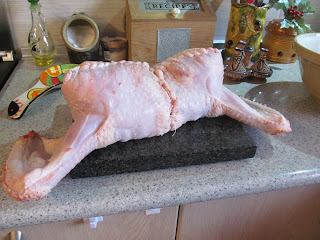 I was more than pleased with the weather on Christmas day and we were able to have our lunch outside on the veranda in the sunshine. 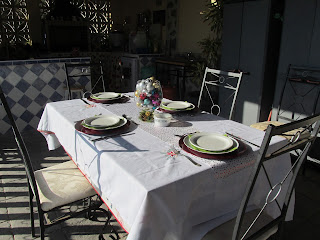 That's a first for us.  The only thing we didn't have was crackers, the Spanish don't do them, and our son who promised to bring them over couldn't fit them into his bag.  We didn't really miss them. 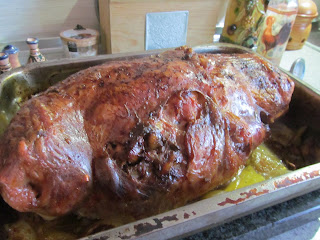 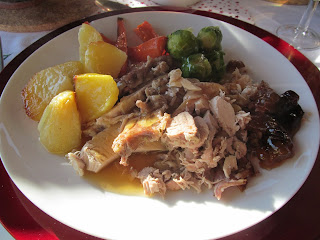 There were plenty of left overs which were recycled into finger food for our Boxing Day Left Overs party which we were able to have on the veranda again.  I do love living in Spain. 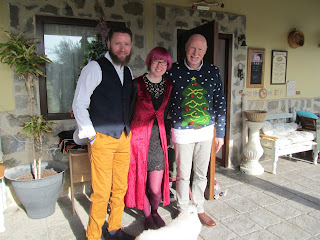 Our aim was for a relaxed afternoon with friends, a little food, a little yuletide cheer and a catch up on everyone's news. 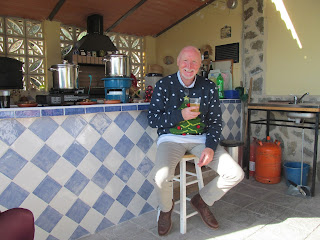 It was also the inaugural outing for our new outdoor kitchen.  We had the wood oven going in the morning and by the time our guests arrived I baked cheese biscuits and sausage rolls and presented them warm straight from the oven. 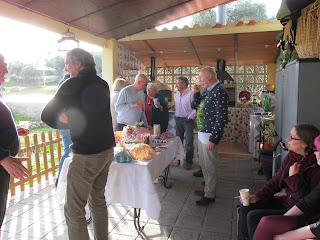 We really enjoyed ourselves.  Isn't that what this time of year is for?  So now we are in the lull between Yule and New Year and the weather has been very damp and foggy.  It looks like winter has finally arrived.  We have another party to go to on New Years eve which we are very much looking forward to and then it will be back to work with the olive harvest to get the last of it gathered in and down to the Cooperative before they stop taking in olives.  We do have plans to visit Salobrena in Andalucia in the New Year but we have to wait until a very special event occurs before we go.  Our second grand child is due to arrive on New Year's Eve, of course she will come whenever she chooses, we are ready. 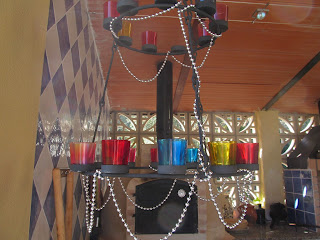 New Years Resolutions?  We don't usually do that kind of thing, normally we just give thanks for what we have and perhaps plans for what we would like to achieve the following year.  This year plans include:  finishing several half done craft projects, improving the veggie plot, pruning ALL the olive trees that need it, finishing the work on the casita so that we can begin taking volunteers again.  No doubt other things will arise as the year progresses.  I hope everyone's plans for their festive season turned out as well as ours did and I look forward to continuing our Spanish adventure with you in 2016. 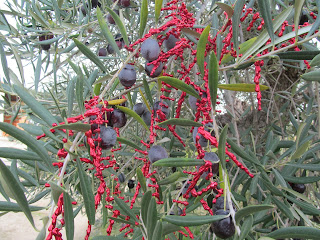 Cooking Festivals life the universe and all that Spain Volunteers Weather