Siblings at Work and Play!

- November 01, 2015
Steve's brothers arrived very late at night... after midnight in fact.  One of them had visited with us before but the other had never been here, didn't really know what to expect.  He might think he had come to the end of the world as they drove up our country lane in the dark.  No street lights here and when its dark its really dark.  It's always nice for our late arriving visitors to wake in the morning to brilliant sunshine and the sounds of the birds... except... 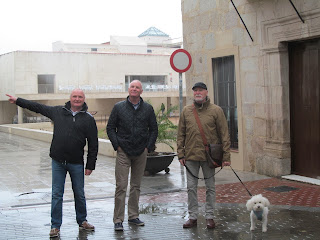 Well yes it rained.  We need the rain, we want the rain but we didn't want it just right then.  Hey ho.  What can you do?  The weather is out of our control.  The brothers are here to help build the Casita. 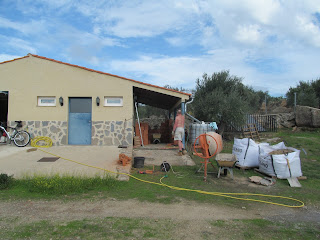 The previous owners had plans to run a campsite here and we toyed with that idea for a short while but then decided that we are retired and we have enough work to do with running the finca but it would be nice to have some accommodation for extra visitors.  So.  What was the campsite shower block is being turned into a one bedroomed  Casita (little house) which we hope to be able to offer to tourists on a budget as well as volunteers or friends and family too numerous to fit into the main house. 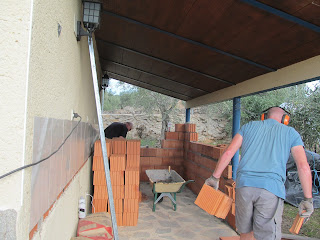 The garage which doubles as Steve's workshop is attached to the Casita.  Eventually, when we are able to build a new garage and workshop up near the house, Steve's man cave will probably be incorporated into the casita as an extra room.  That will make it a very reasonable sized holiday cottage but that could be a while in the future.


The brothers work a little and then play a little.


They brought their bikes with them and so all three siblings have been out most days exploring the countryside, experiencing the great roads we have here and the fabulous views from the Sierra de Montanchez which is right on our doorstep.

My job has been mostly in the kitchen trying to make enough food to fill them up.  It's been really enjoyable making big hearty meals and seeing the whole lot disappear very quickly followed by contented sighs and smacking of lips.  There is nothing quite so rewarding as people loving your cooking. 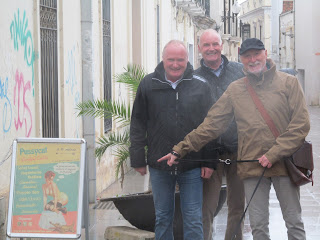 I think it has been a very long time (years and years) since all three brothers have been together for any length of time like this.  It's been good to watch.  It only took a day or two before they settled into the familiar camaraderie of jokes and laughter and stories remembered from childhood. 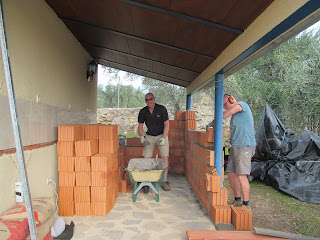 They won't get the Casita finished before they have to go back to the UK but Steve will be able to do the rest fairly quickly I am sure.  His brothers help and expertise has been really useful in getting him started on what is for us a fairly major building project and something that Steve has wanted to do for a long time... i.e. actually build walls himself!

The outdoor kitchen at the house is still as we left it two blog posts ago - and there is rotavating to be done in the veggie patch and olive suckers to remove before the harvest begins in December.  No we don't feel panicked by the amount of jobs stacking up or any pressure to get a move on... it would seem that the Spanish laid back attitude has sunk in more than we realised.  Every job/project is viewed as a new fun thing we want to do and we fill up our days with doing whichever takes our fancy - yes, some things are I suppose 'urgent'... or at least more urgent than others but nothing is more important than taking the time for family and friends.  This is the life!
Autumn Building Chit Chat Family Farming life the universe and all that Weather