- November 22, 2015
The first autumn we were here we had a visit from a little Wagtail.  He/She was so cute.  Sitting on the car chirruping away, then sitting on the window ledge, waking us up in the morning.  We loved it.  We like nature and we love having so many birds as our neighbours.

Even more cute, we noticed that he liked to perch on the wing mirrors and then talk to his own reflection.  Then he started throwing himself at the window ... perching and admiring himself in the glass.  We tried very hard to get a photo of him but he's too fast and too flighty.  This one was taken through the kitchen window so it's a bit grey. 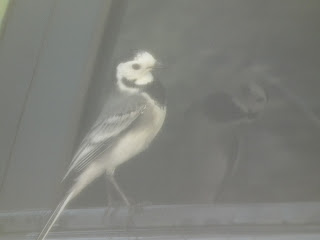 But he's still cute.  Until we noticed the bird poo all over the car. 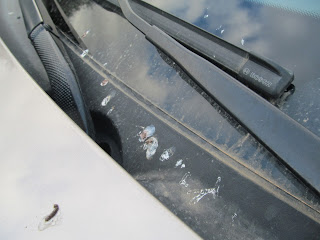 We covered the car with old towels which we wedged into the windows but he still came and looked in the windscreen instead.  Then we put plastic bags on the wing mirrors to discourage him.  It doesn't discourage him but at least it keeps the mirrors clean. 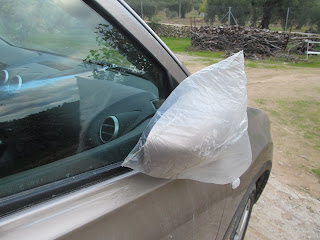 When it came spring time.  Mr Wagtail disappeared.  Phew we said.  What was that crazy bird doing?.  Last autumn he turned up again.  Or is it a different bird?  We never see more than one wagtail around so we figured it was the same bird.  He waits in the tree for us to park the car and then he would swoop down to chat to himself in the mirrors again. 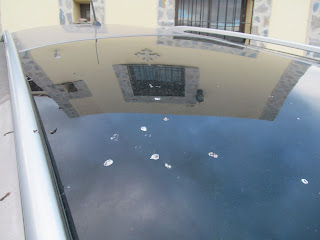 We even put a photo of an eagle in the window of the car to see if that would scare him off.  It seemed to for a while but eventually he got wise and came back to poo on the car some more. 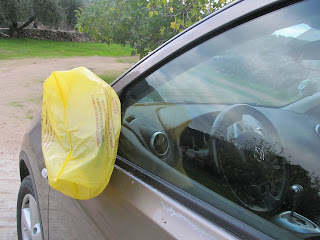 This autumn he has returned.  And we are sure it must be the same one.  We never see more than one and his behaviour is so odd, more like what you would see in a caged bird.  We even watched him see off a sparrow who came to investigate what was so appealing about the car mirrors.  He is definitely protecting his territory.  We even had to offer visitors plastic bags for their car mirrors... it isn't just our car he is in love with.

So we have named him Dorian - don't ask!  I don't know how long little birds live in the wild, I didn't think they lasted that long to be honest, but his arrival has signaled the change in the weather and the bringing out of the woolly jumpers.  And I daresay if he doesn't pitch up again next year we will miss him.  We won't miss the bird poo though.
Autumn birds