- November 17, 2015
You know how the guys get interested in cooking when it comes to BBQ's and us girls tend to see it as a welcome break from the kitchen stove and just let them take charge?  Well I am convinced that although the men probably brought the meat back to the cave, the women must have been in charge of the fire and likely did a lot (if not all) of the cooking!  Fire scares me.  I was a very grown up adult before I could even light a gas cooker without flinching.  But I am determined to 'take back the fire' and it all starts with the bread oven.  I couldn't put it off any longer.  With a certain amount of trepidation I fired it up. 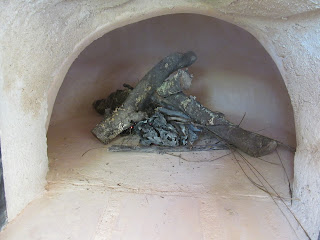 It took a bit of time to get the fire going since firelighters are a big 'no no' as they deposit chemical residue on the oven floor which is where you might want to put a pizza or a loaf of bread.  So its an old fashioned paper and little sticks pyramid job which failed a couple of times until I added a whole pile of twigs from last years fig prunings. 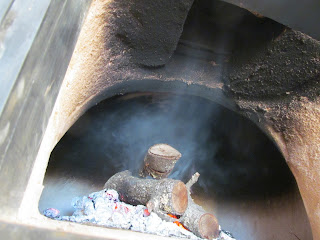 Once the fire gets going you have to keep adding wood until it get so hot that the ceiling of the dome goes white. 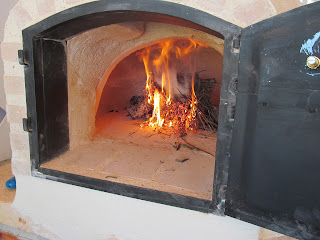 First the smoke turns the inside of the oven dome black as the oils and natural resins burn off the wood.  You have to wait until this black coating turns white hot before you start cooking your food. The thermometer is not very accurate so the best indication  of readiness is the colour of the oven ceiling.  Basically, you get the oven as hot as you possibly can and then you cook as the oven is slowly cooling.  There is an order to what you put in and when.  Pizza first.  This cooks fast and hot.  Then bread... about 20 to 30 minutes depending upon the type of bread.  Then biscuits or cookies... short cooking time.  Then cake.  Then a roast or a stew or a slow cooked one-pot meal of some kind. Soft fruits or slow baked apples would be perfect next and finally when the food is all done you can 'kiln dry' your wood for the next firing. 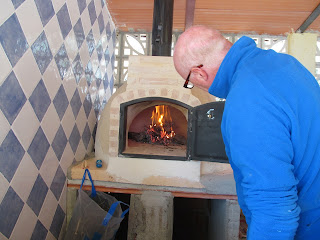 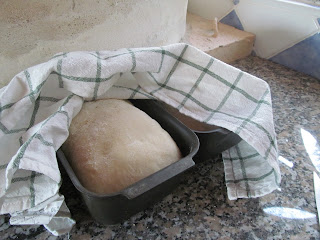 While waiting for the bread dough to rise I shut the oven door so that the fire would go out but the heat would stay in the oven. 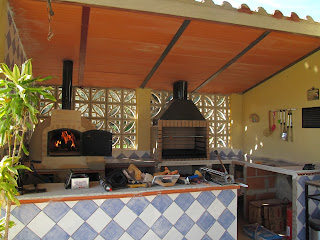 If you are cooking pizza or something that needs to be cooked or seared on the top then you scrape the remains of the fire to one edge so that flames lick up the inside of the roof and radiate intense heat downwards onto your pizza or steak or whatever.  You can cook these things with the oven door open. But with bread you are supposed to remove the embers totally and shut the door so that the bread cooks evenly from the 360 degree radiant heat in the oven walls, floor and ceiling. 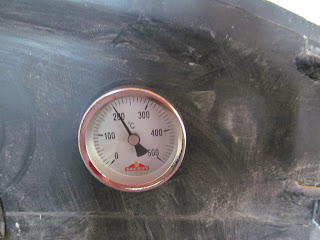 Because we haven't actually finished the tiling in the kitchen yet and things are a bit untidy, I didn't quite know where I was going to put the red hot embers (eventually they will go onto the BBQ tray to be used for cooking lunch), but for now I decided to push the remains of the fire to the back and hope that the top of the loaves wouldn't burn.  I deliberately chose a couple of small loaves made in the tin since Baguettes or Cottage loaves which are baked directly on the oven floor seemed a bit adventurous at this early stage. 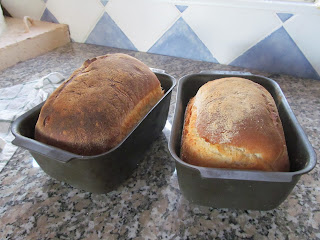 The timer rang... ta da... I did forget to close the chimney which probably meant the oven was losing heat faster than it should.  Once the fire dies down if you shut the door and close the chimney (there is a handle to do this) it helps keep the heat in.  After about fifteen minutes Steve said he could smell toast all the way down at the hen house... I peeked through the spyhole in the door but even shining a torch it was too dark to see anything clearly.  I gave the bread the usual 30 minutes that it gets in a 220C oven.  It came out a little overdone but the crust looks amazing. Not to waste the heat I rustled up a tray of honey biscuits.... 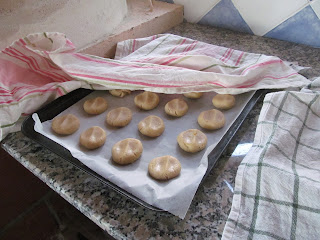 6 - 8 minutes says the recipe.  I set the timer for 6 minutes.  When it rang I looked in and they seemed to be a tadge on the pale side so I gave them the other two minutes.... possibly a mistake. 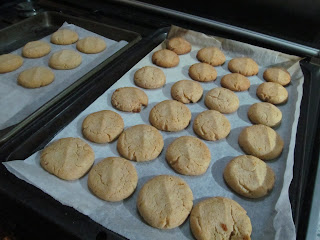 They looked perfect but when I turned them out it was obvious that some of them, the ones closest to the fire, were overdone. 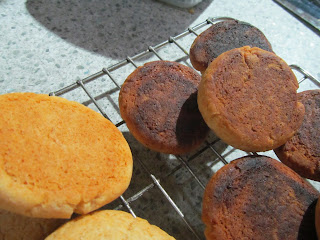 Since I wasn't really organised with anything else - should really be a cake going in next - I thought I would make a pot of soup.  I dug out the last few past-their-best veggies in the bottom of the fridge and adding some chicken stock and some left-over tomato salsa and put them in a ceramic pot which was then put into the oven to slow cook overnight.  I will let you know how it turned out the next time I post about the oven. 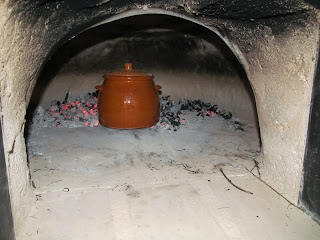 This is a total experiment.  Who knows if the carrots will be cooked?  They should be... the oven should hold its heat for more than 24 hours at least.  Here you can see that we hadn't totally burned off the black coating on the walls.  That is because we had a little scare when the oven was getting very hot and I chickened out and didn't add any more wood - which we will do the next time.   What happened was that just as the ceiling started to turn white we also noticed what looked like smoke drifting off from the top of the dome (on the outside!).

Now, if the oven hadn't been dropped, we would have assumed that this was totally normal. In a complete panic I telephoned the builder and found that my Spanish was inadequate to explain the situation on the phone so I simply told him to come now, that it was an emergency. 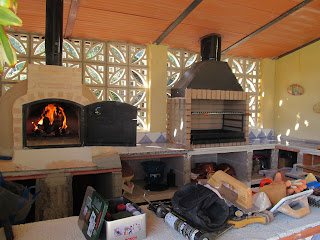 He arrived and of course the fire had cooled a little and the 'smoke' had all but stopped.  He slapped the outside of the oven, which was quite warm, several times and said it was absolutely fine.  I expressed my doubts so he phoned the supplier and he also said it was fine.  Then I felt rather foolish... but what can I say... I am a bread oven virgin.  Or I was... 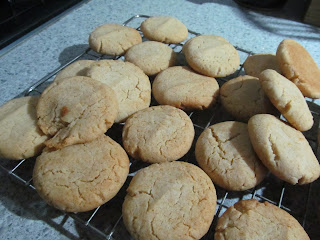 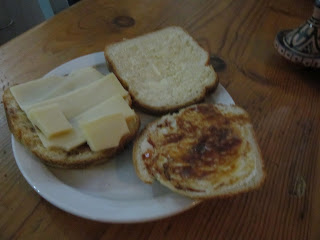 The bread is up there as one of the best loaves I have ever made.  The crust was amazing!  I need to get used to the scary fire though.  Practice will make perfect I am sure.  And I just might be doing several more posts on this... but they will probably be over on the Food from the Finca blog (hit the link for the latest food I've been cooking).  It's been a nerve wracking but thoroughly enjoyable day and I can't wait to do it all again, though without the builder's emergency visit next time.

Building Cooking Spain What is a Technobilly?