- October 24, 2015
No this isn't a trailer about Game of Thrones, sorry to disappoint those who searched on Google expecting to find something quite different.  It really is a post about getting ready for winter.  In this part of Spain we rarely get snow but all things are relative and when you have had weeks and weeks of +40C temperatures during summer getting up in the morning to a mere 13C or 14C can feel positively nippy!  And it will get colder than that when winter finally kicks in.

Autumn came and we were overjoyed.  Imagine the best English summer ever and you have just described our autumn here.  A little rain and the grass starts to grow  - GREEN! 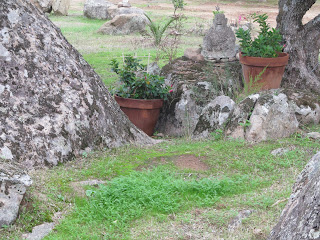 What a joy to the eyes, especially as the sun is still shining.  Walking the dog can be done during the day rather than at the crack of sparrows and sitting out on the veranda is once again my favourite pastime.

The Spanish tv starts showing more and more adverts for cold and flu remedies and along with a little more rain and a further drop in temperatures and we are unpacking our winter woollies and preparing for the real cold weather to come.

During the summer months my rugs have been wrapped carefully in plastic and stored away.  I had thought that they were clean but on unwrapping they looked very dowdy and I think I must have just rolled them up in a hurry.   This ought to help. 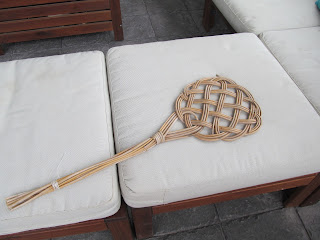 Several hours on the washing line and then a good beating removes a lot of dust.  Builds up the arm muscles and gets rid of a lot of pent up frustrations!  I expect it looks amusing too if anyone was watching me... I hope not. 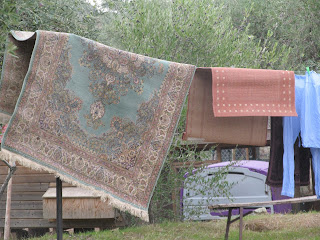 A hoover (yes my vacuum cleaner is now fixed... new motor works fine... just hope it lasts) on both sides. 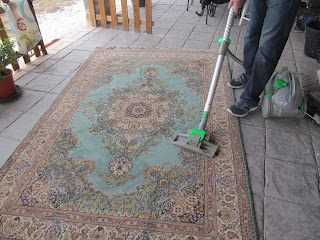 Then a steam clean.  This is positively one of the best gadgets we have bought since moving here.  It cleans using only steam.  This is not only thrifty (bearing in mind that it is an electrical gadget) but also very eco-friendly. 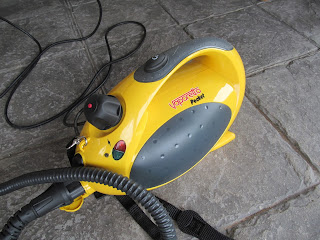 No detergent or bleach required.  Since we have tiles throughout the house a mop and bucket can get pretty messy... the steam cleaner really gets the dirt up and I am not constantly having to change the water in the bucket or using water that gets increasingly dirty each time a mop is rinsed in it.  It is also very adaptable, cleaning carpets, upholstery, curtains (in situ) floors of course and the bathroom - shower, toilet and taps... all sparkly clean! 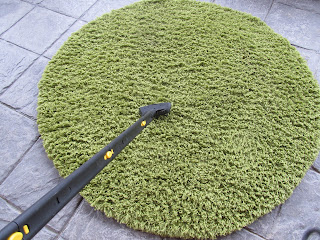 My mother in law was here for a week and with only one day free in between we have more visitors arriving tomorrow so I took the opportunity to do a washing but then it rained so the washing came in and has been hung on the indoor railings. 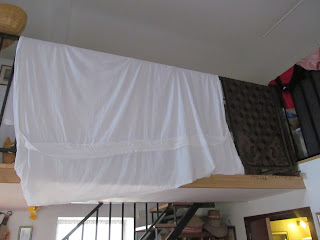 I hate doing this and this is the first year I have had to do it in October, January being the worst month of the year for drying washing.  Makes me feel like I'm living in a laundry! 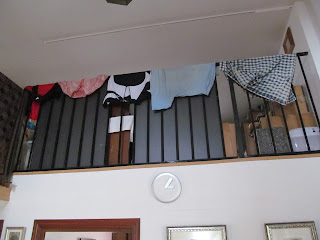 Steve had some winter preparation jobs to do too. 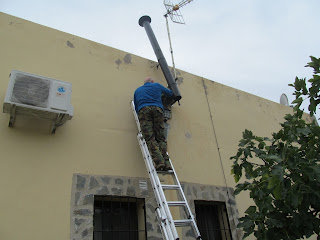 The chimney is given a cursory sweep.  It had a really good clean last winter and doesn't seem to have suffered very much since.  Ten minutes was all it took.  We haven't actually lit the fire yet but I can feel it coming. 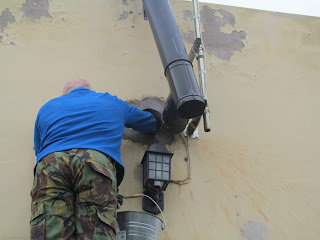 At the moment I am cuddling on the sofa with a blanket during the evenings and it is likely that we will have some warm weather still to come before the real winter hits, looking forward to that, but also its good to know that we are ready.

Our outdoor kitchen has not progressed at all.  The builder is waiting for a sack of special concrete to arrive so that he can repair the base of the oven.  All other jobs are waiting for that to be done first.  My October deadline for the outdoor kitchen is well past and the new deadline is Christmas.  I would like to make Christmas dinner in the oven.  But... since I am very much a novice at the cooking with fire thing I would like to practice a bit first so hopefully it will be all done before the end of November.  This is Spain, there is no hurrying things and all will be finished.... eventually.  In the meantime we are feeling well prepared for whatever the weather decides to do!  Winter?  Bring it on!
Autumn Chit Chat Cooking Energy Weather What is a Technobilly?