- September 23, 2015
And sadly I didn't grow any of them!  The tomato season is starting to wind down now.  For several weeks we have been driving over squashed tomatoes on the roads to and from Miajades - our nearest sizeable town - and every time we career around the roundabout we remark that someone should pick up the tomatoes. 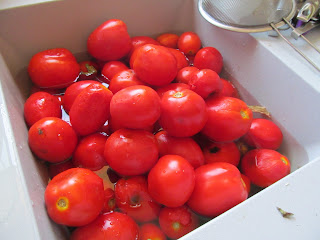 No, we didn't stop to pick any up either.  Tomatoes are so cheap when in season and even though we didn't grow any this year I decided to bottle some tomato sauces for winter. 8kg of tomatoes to be exact.  Lakeland were true to their promise and my jars and lids arrived just 7 days after I ordered them.  The courier phoned me and we arranged to meet at the local fig factory which is just five minutes down the lane from the finca.  It was all very painless.


I made two sauces - a rich tomato and vegetable sauce that is suitable as a base for a ragout, a bolognese or a chilli.  And a pizza sauce - a very basic tomato sauce that is perfect for smearing on home made pizza.

It was a lot of work.  I used four pans in total in order to get everything cooked and it took me all afternoon to make the sauces.  The last pan was switched off at 9pm last night.


This morning I set up the Pasteuriser and then washed the jars and put them into a warm oven to dry.

The sauces were still very chunky and so I put them into the food processor, which had to be done in batches.  Then I warmed the sauce through again on the stove top before filling the warm jars and putting the sterilised lids on the top.


Twenty minutes in the boiling water and they were done.  Again I had to do two batches.  There is a lot of heat involved in preserving this way and I am such a coward where hot things are concerned.  Wearing heavy duty rubber gloves and oven gloves on top it would be really easy to make a very clumsy mistake with scalding water all over the place... doing things safely takes time...

but finally it was done.... after another hour the kitchen was tidy again and it was just about time to make lunch.  Blimey!  I have plans for bottling apple sauce tomorrow which may well turn into another marathon!  The sauces will wait until they are cold and then I will test the seals and put them into the cupboard to store.  They will keep for up to a year but I don't think we will keep them that long.  It's a perfect stand by food for those days when you really don't feel like cooking and you can't be bothered to go to the shops for anything special.  And with all those wonderful fresh veggies in the sauce it's like summer in a jar!

Autumn Cooking Preserving Spain What is a Technobilly?