- September 09, 2015
After all the inactivity of summer, and hiding indoors from the +40C temperatures outside, it felt a bit as if we hadn't actually done very much this year.  So I thought a review of what we actually have accomplished might be useful.

Livestock:
We hatched six chicks (well mummy hen did) five of which reached maturity, two of which were eaten by us.  We have an issue of having two full grown cockerels now and we are currently keeping one of them separate from the main flock.  We are too fond of him (even though he is very similar to our existing cockerel) to eat him so another hen run is planned with the addition of a couple of hens for his harem. 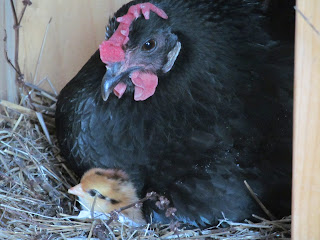 Veggie Plot:
Overall the veggie garden was neglected this year.  We have excused ourselves by saying that we have been making structural changes to the garden which will make it easier to grow next year.  We refined the watering system but it's still reliant on the water that comes off the roof of our house... 6,000 litres in the tank sounds like lots but we went through that really quickly.

We planted four new trees in the vegetable plot - 2 of which are definitely dead.  The cherry has survived along with a peach.  I suspect the issue was the very hot spring and not enough water.

We had quite good success with early cucumbers but they quickly turned bitter with the inconsistent watering and high heat.

Six cotton plants grew, a bit stunted, but they still managed to produce enough cotton to make something small - what exactly I will make with it hasn't yet been decided. 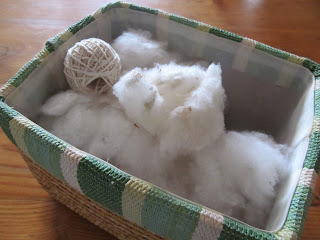 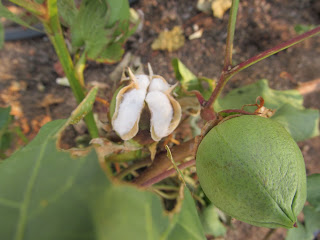 Lots of ornamental squash were sown, only two plants thrived and of those two only one produced ornamental gourds - these are drying on the vine as I type and if they dry successfully they will be put to some art project next year.

10 Loofah plants were sown in pots, germinated and were potted on, thrived and then were planted in the garden where they slowly gave up the ghost and died.  Mmmmmm not sure why.

One purple aubergine has survived being neglected and is still producing well.

Finca:
In spite of the warm spring and less rain last winter the figs have produced roughly the same as last year.  We won't know for sure until they are weighed (this weekend) but it looks like the harvest has been consistent. 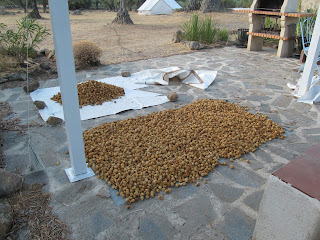 Clearing under the trees was much better this year too which made the actual harvest so much easier.  We lost one young fig tree when the pool was built but the base is still intact and its likely it will grow again next year. 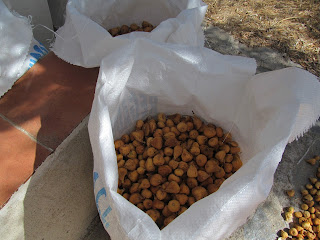 The grass on the finca was cut in record breaking time thanks largely to Steve's hard work and the new grass cutter. 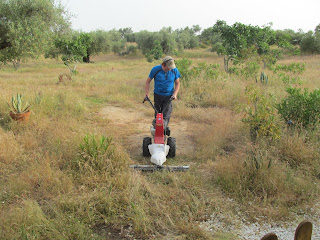 Building work:
Two sheds were erected.  One for garden tools and the other for storage and the soon to be bought olive oil press.  A new hen enclosure was built. 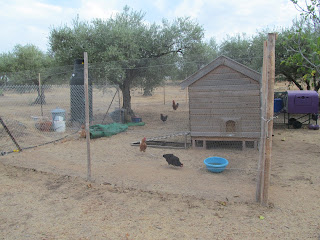 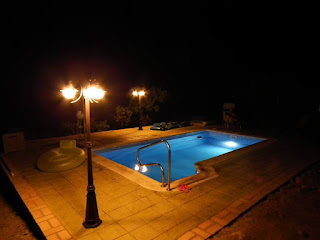 Crafts:
In spring I took delivery of a very large sack stuffed full of dirty sheep fleece.  At the start I set to with gusto to clean the filthy fibre, being really keen to get to the interesting bit which is of course, the spinning,  After a while I slowed a bit.  The cleaning of the fleece was as disgusting a job as any I can think of followed by the combing of it which was the ultimate in tediousness.  And then for the longest time I just looked at the sack of dirty fleece while the sun shone relentlessly and the flies circled the bag.  But eventually spurred on by the fact that it seemed to be attracting wasps as well as flies I managed to get it all washed.  Ta Da!  I now have a very large sack full (and a bit more besides) of relatively clean fleece in need of combing, which I will get around to, eventually. 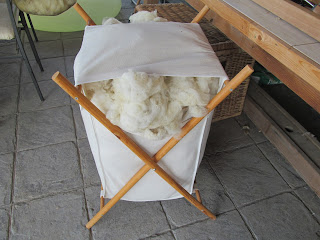 None of the tasks accomplished were done in record breaking time but that wasn't really the point.  It's a fine balance between work, play and laziness and if we err on the side of laziness, well, we are retired! 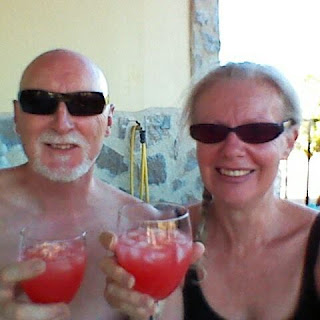 Crafts Gardening Summer Volunteers What is a Technobilly? Wool