- June 11, 2015
The last round of chicks that we had turned out to be three cockerels and two hens.  We were very disappointed to see so many cockerels - but unfortunately its the way of things.  As the cockerels grow they start to challenge each other and then, when they feel brave enough, they have a go at Raul our 'head' honcho.

The disruption caused by teenage cockerels on the main flock cannot be underestimated.  One hen has obviously been getting stressed and has started pecking feathers out of the backs of the others. 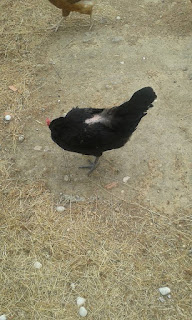 The two full grown black hens stopped laying and since they weren't broody I could only assume that they were also stressed, whether because of the feather pecking or the presence of three young cockerels I don't know.  We assume that the one brown hen who still has all her back feathers is the one doing the pecking.

The last time we had cockerel chicks we left them a little too long before culling - even though the extra couple of weeks added quite a bit to the size (and the meat was delicious) it also caused havoc with the dynamics of the flock which resulted in a hen breaking a leg (and therefore losing her life) when she got caught up in a fight between two young cocks and Raul.  This time we were determined to forestall any fighting and cull the cockerel chicks in good time. 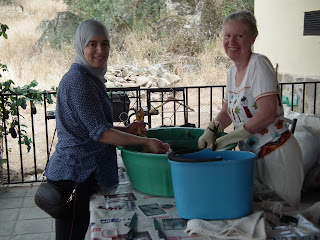 We are capable of doing the job ourselves but its always nice to have help.  It isn't a fun job and really you have to just not think about what you are doing until its all over. 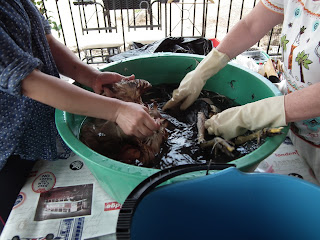 As the fates would have it one cockerel got away and we couldn't catch him so we only did two.  They were a bit small but put together in the same pot will make a decent coq au vin.  They await a special occasion in the freezer.


Already the finca seems calmer.  Raul is crowing less often and the remaining young cockerel is shepherding his two sisters away from Raul and in general they are behaving like two separate flocks.  If things stay calm and the feather pecking stops we may simply allow the young cock to live.  Although with a practical farmer's perspective he is totally useless and is eating hen food which costs money.  From our point of view, we seem to be feeding a huge population of sparrows (which fly into the hen run and help themselves to the feed) and get nothing in return so the extra cockerel is neither here nor there.

The hay making progresses although it has ground to a halt today because of rain - the joy of rain!  We woke in the night to flashes of lightening and the crash of thunder and the coolest of breezes that had us reaching for the top sheet.  A day off is welcome as we know the sun will be out tomorrow (isn't that a song?).  The number of haystacks on the finca are growing.  Everywhere is gold and bronze and we find ourselves sighing at pictures from friends in the UK who post their 'rainy day' shots of green fields and lush forest undergrowth.  No we wouldn't swap with them but green is very soothing and we look forward to our autumn rains that send new green shoots poking up within a day or two. 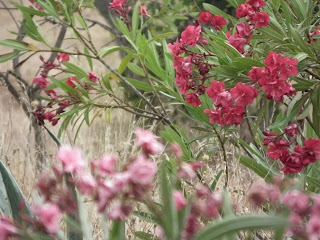 The Oleander is in full bloom which adds a touch of colour.  Many people dislike the Oleander because it is so poisonous but I love the bright colours and it is so easy to grow here, where getting anything to flourish through the extreme summer heat is a feat.  No one is going to eat it, we don't keep horses and the cats and dog leave it alone so I think I may plant more of them.

But the summer heat is still to be endured before I can do that.  Its not a long summer really... 8 or 9 weeks maybe before temperatures start to come down to bearable but it always feels like its going to be a long haul when things first get really hot.  We are talking about temperatures starting in the low 30C and reaching 40C in late July/August.  I am prepared.  I have a dozen trashy novels on my kindle - I have started the first, Outlander by Diana Gabaldon.  A Scottish historical romance with the twist of time travel... a bit silly but very compelling and easy to read and I am really enjoying it, the perfect 'hot-lazy-nothing-to-do' weather reading.  I have some sewing jobs still to be done and I am continuing with the washing and combing of sheep fleece in anticipation of spinning and knitting next winter.  But the best thing of all about the hot summer is that it is a guilt-free perfect excuse for doing almost nothing but resting.  That has to be something worth crowing about!