- April 30, 2015
The phone call from the shepherd came and we headed off to his corale with a certain amount of excitement on my part.  The shearer had already gone and the fleeces were bagged up ready and waiting for the lorry that would come to collect them...  There you go announced the shepherd... how much do you want? I was a little confused.  The wool was all jumbled up and most of it incredibly dirty.  This isn't how I had seen sheep fleece in the UK.  Or on Youtube which is where most of my experience of spinning and spinning related facts come from. 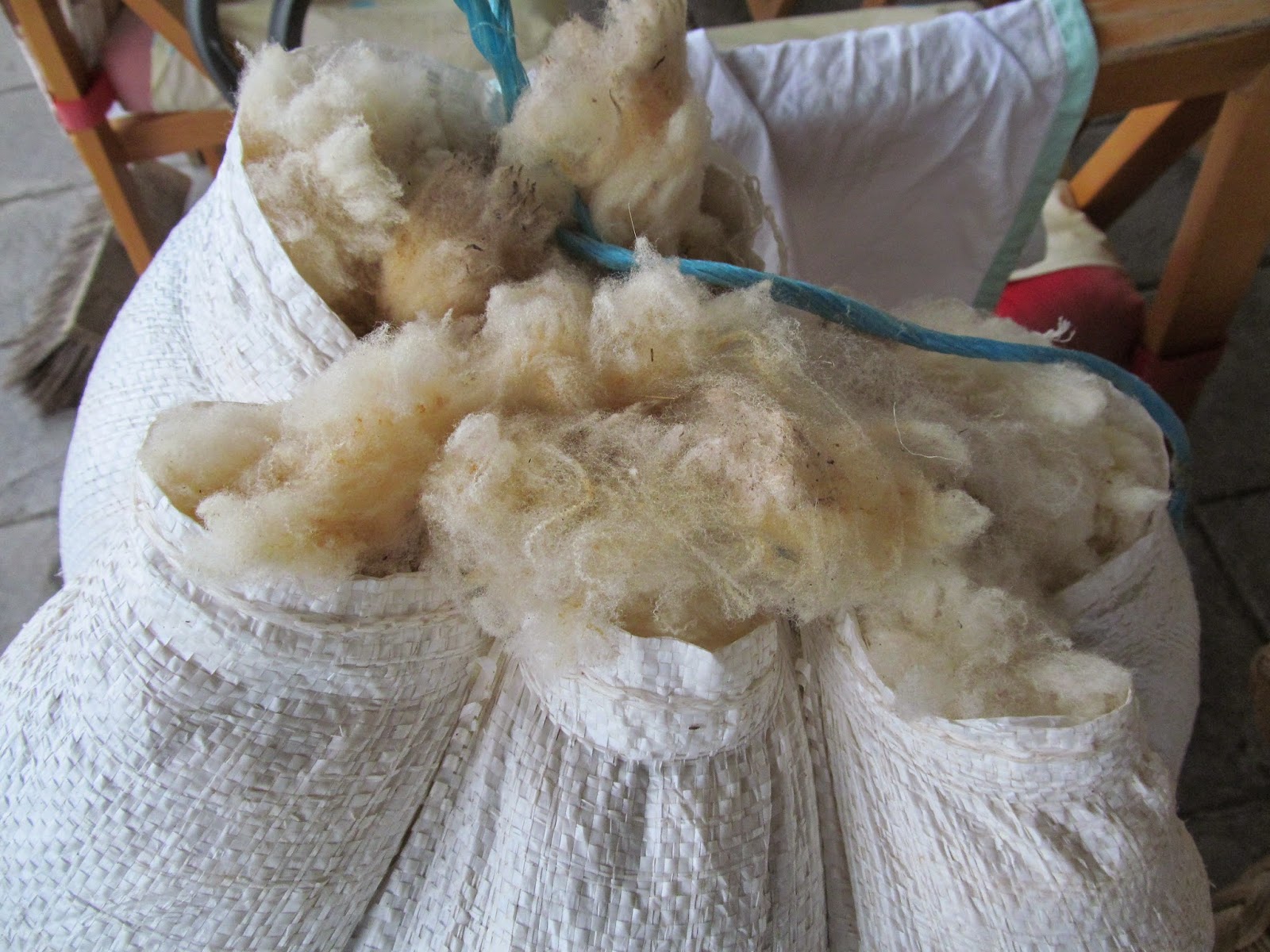 Most of the websites or blogs on the matter talk about spreading the fleece out and skirting it, or discarding the short legs and underbellies and the dirty bits leaving the longest bits for processing.  This wasn't like that.  All the fleeces had been scooped up from a dirty shed floor where they had lain while the shearer was doing his thing and complete with loads of crud, stuffed unceremoniously into a large sack. 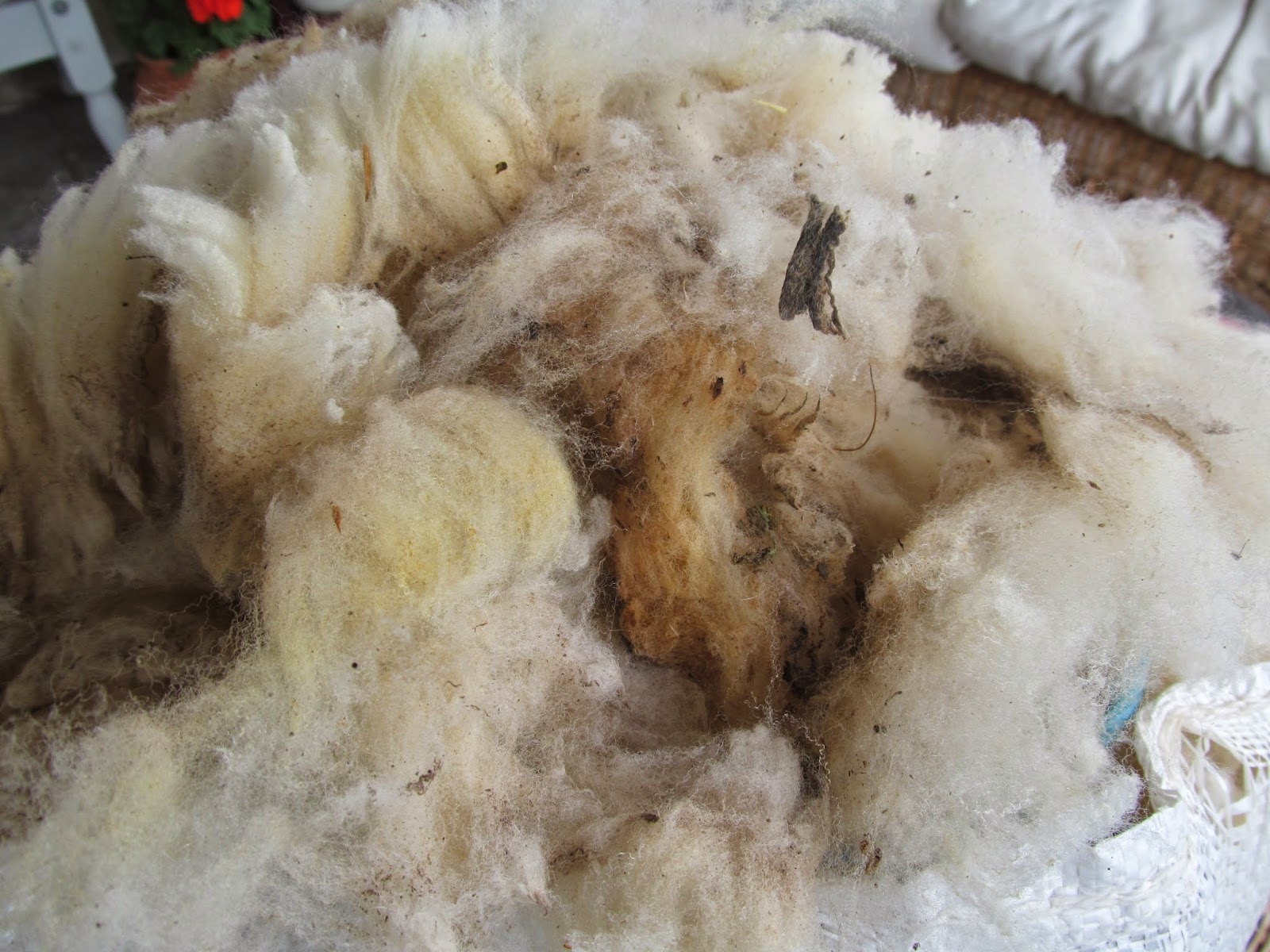 I don't want the really short or the really dirty said I.  Jose then tried to sort out some wool for me.  I think I have about five sheep's worth of back wool.  But it could be less or more.  The local sheep are not in general the large well fed fluffy things that I have seen feasting on the lush green English pastures.  For a great deal of the year the grass disappears here and leaves only stubble and seeds behind.  This meagre fare is what sustains the sheep until the October rains force up some new shoots.  You would think this would show in the quality of the wool. 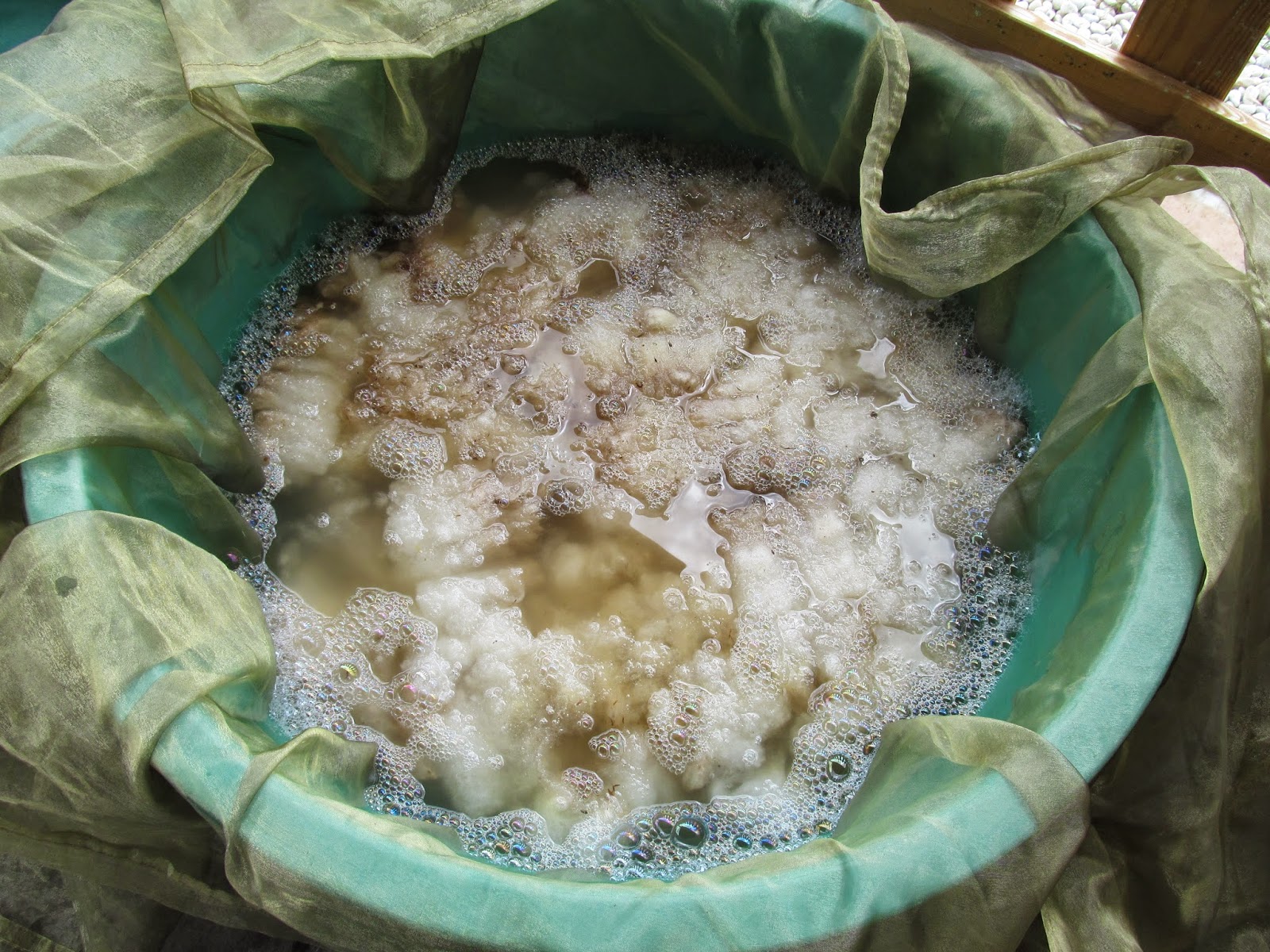 Last year I processed a very unpromising looking Jacobs fleece which I brought from England and which turned out to be a gem so I decided not to be too downhearted or daunted by the dirty merino and set to cleaning a small amount of the fleece to see how it goes.  I am not sure my technique is especially good.  The internet abounds with advice for handling merino fleece which involves a lot of lock separating and washing of individual small 'handfull' sized pieces - realistically... this aint gonna happen with this. 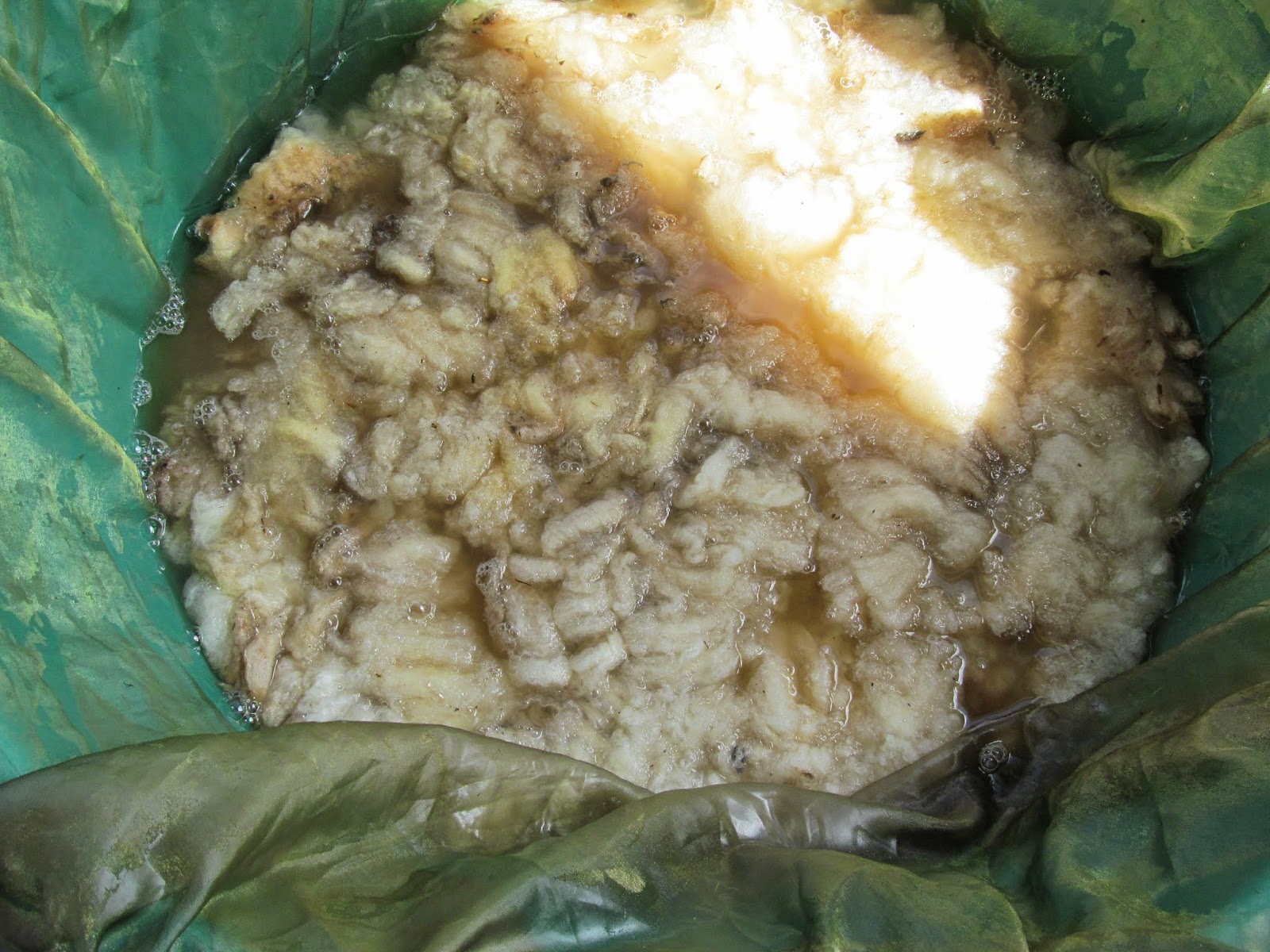 The first wash is in really hot water with lots of washing up liquid to help remove at least some of the natural grease.  To try not to felt the wool ( this is irreversible and would be a disaster) I laid some net curtain onto the base of the bucket and then carefully immersed the dirty wool on top.  I used the net to lift the wool out and drain it before soaking again in another bucket of hot water with washing up liquid. 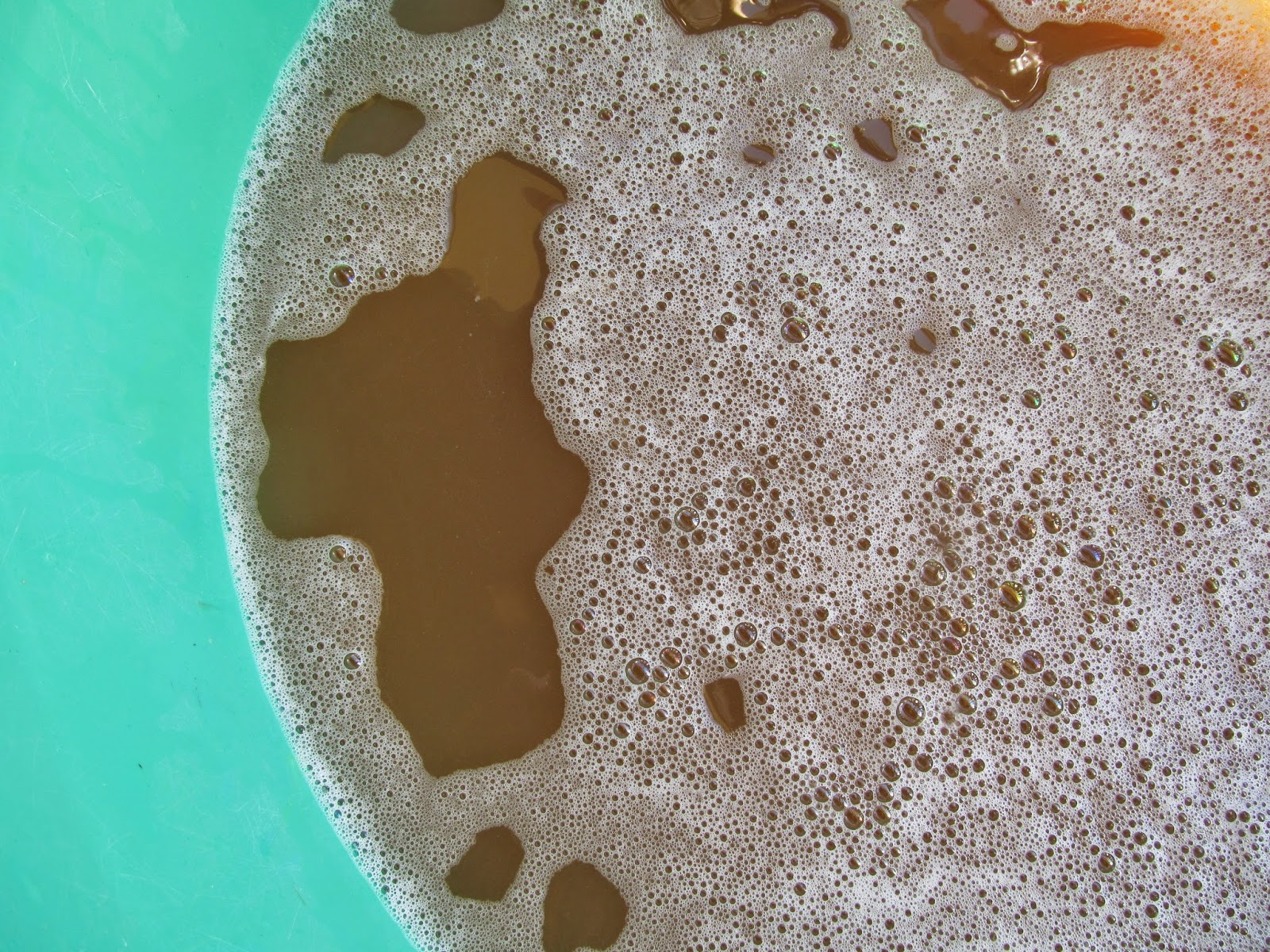 It took three washes and then two rinses to get the water running clear. 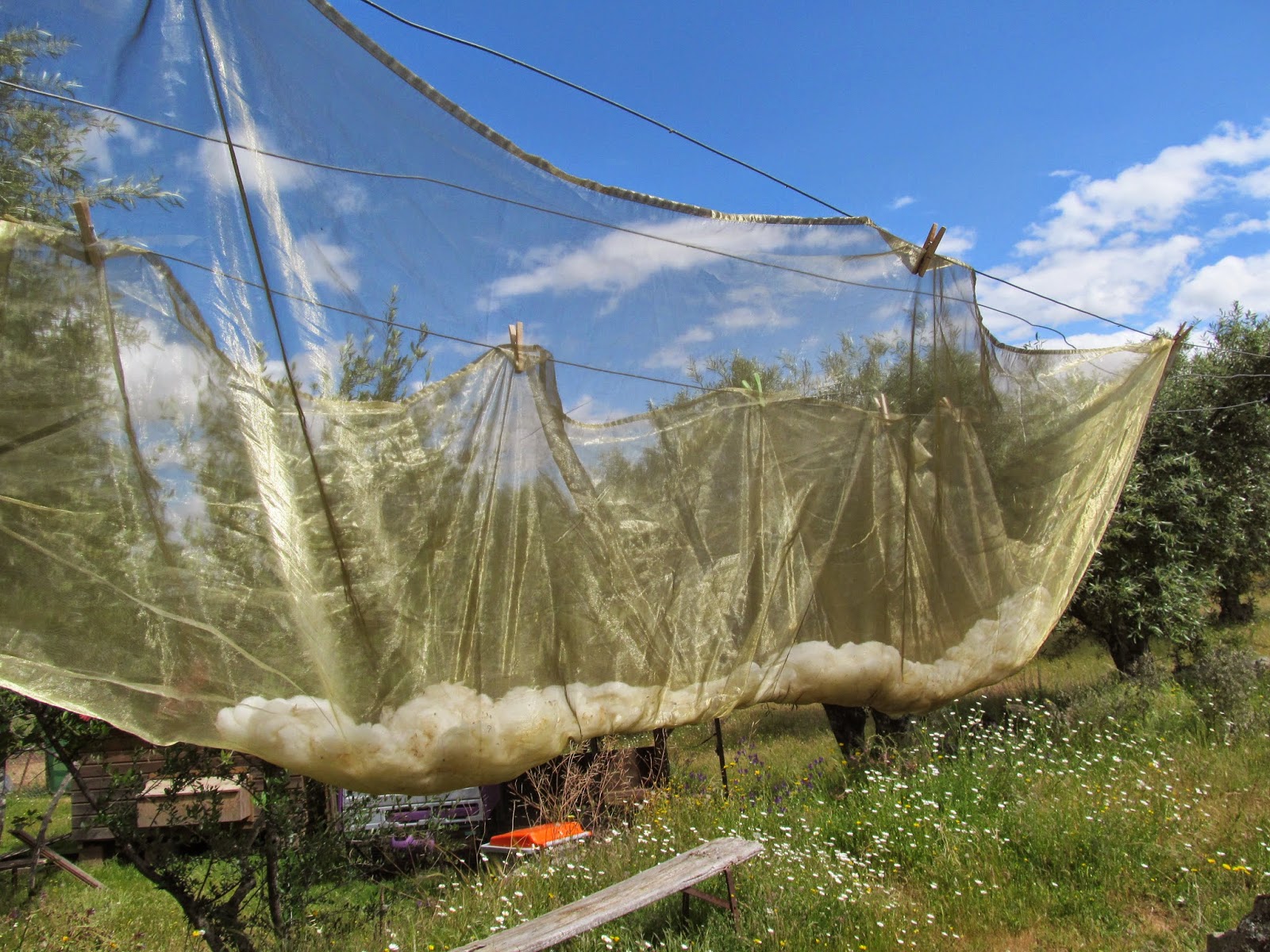 Next I hung the wool filled net out on the washing line to dry.  Luckily the weather here is fairly predictably good and most of it will dry in a day.  I think doing this job in the UK would be a nightmare... you can't be sure of a single morning of sun never mind a whole day, or however long it will take to dry the fleece. 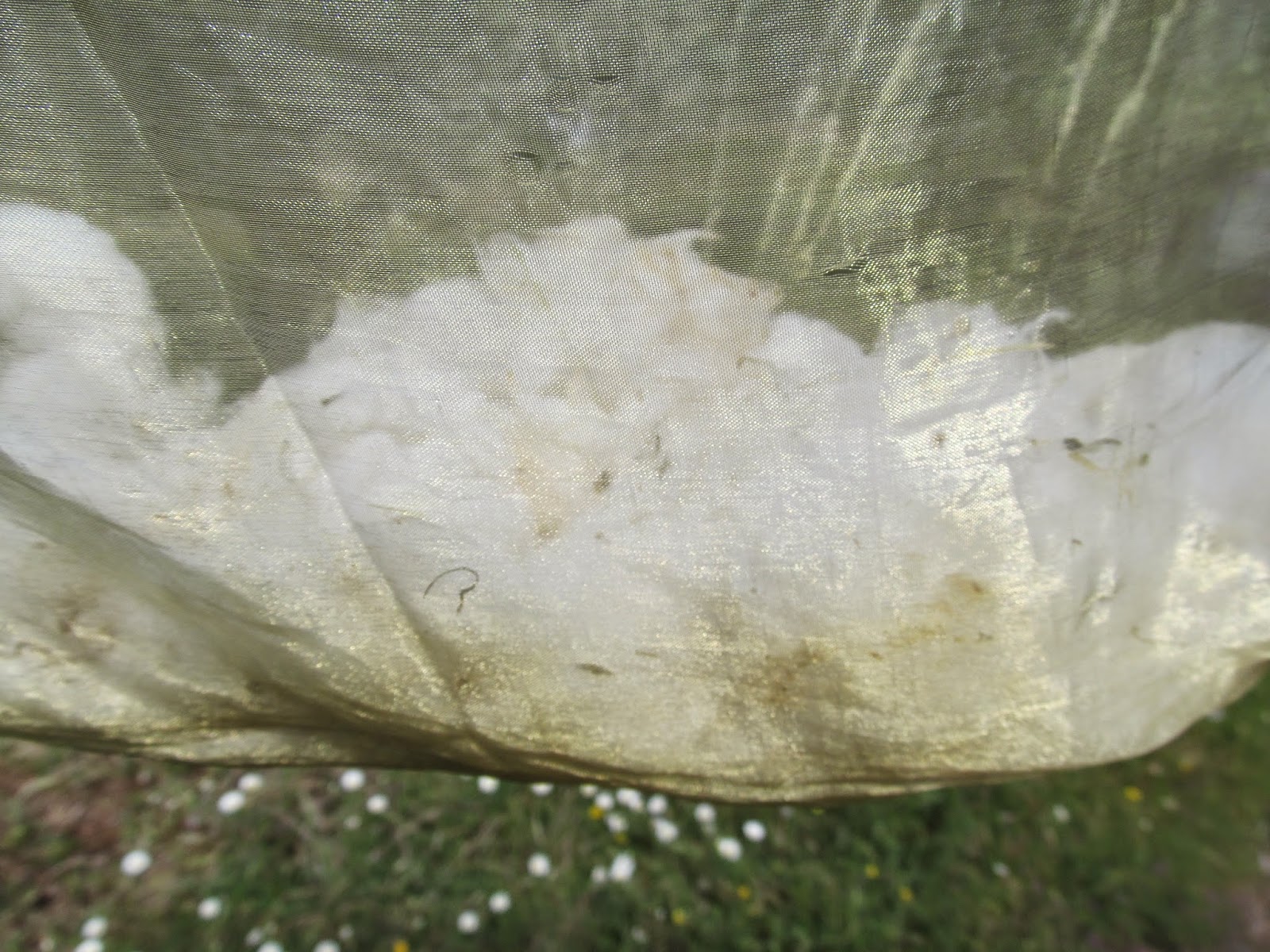 I am heartened by how clean, white and bright the fleece now looks and is not too disimilar to the stuff I processed last year - which I thought was dirty to start with but was ten times cleaner than this.  The next step is to card it - basically brushing or combing the wool into batts which I can then spin from. 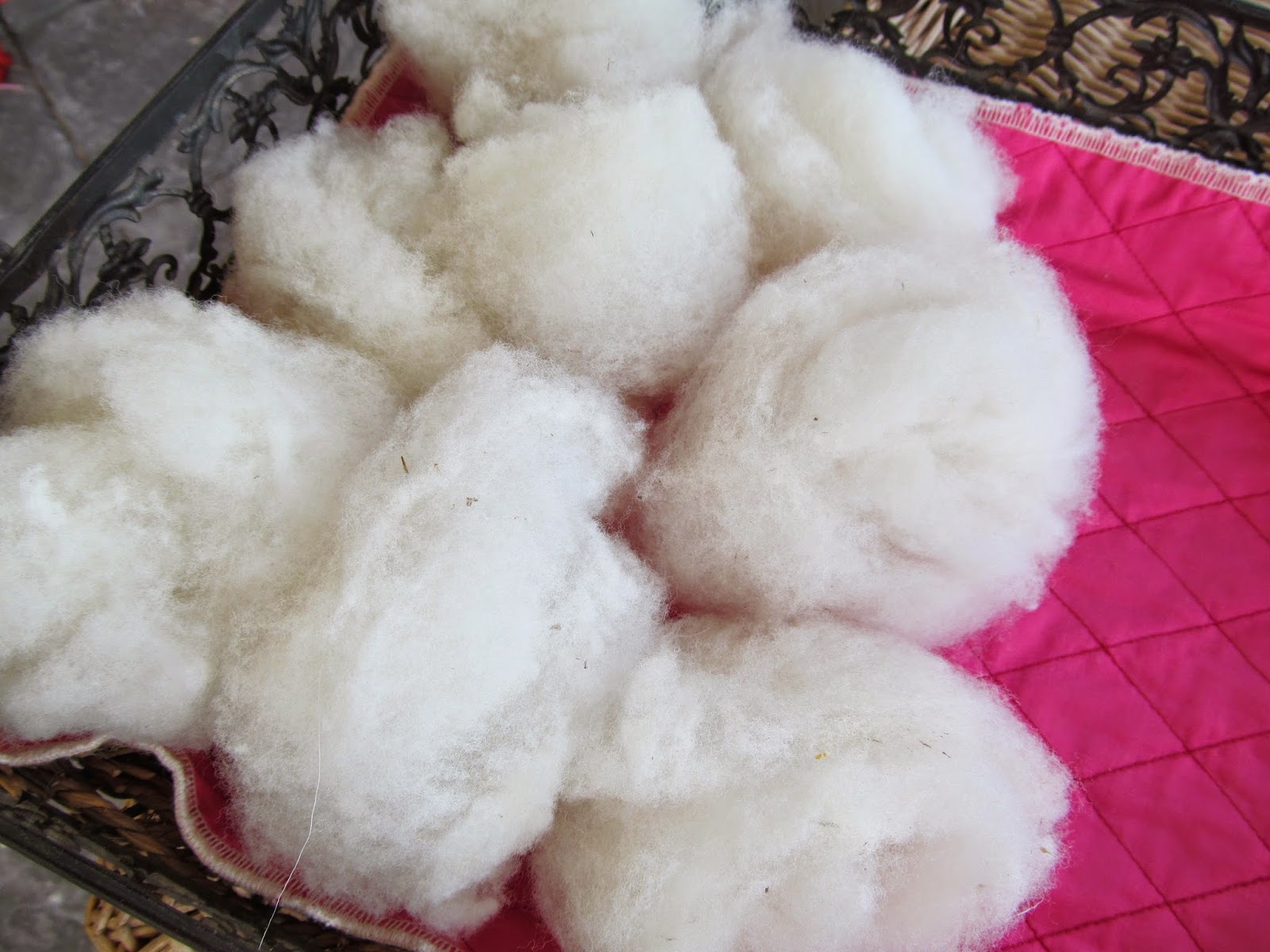 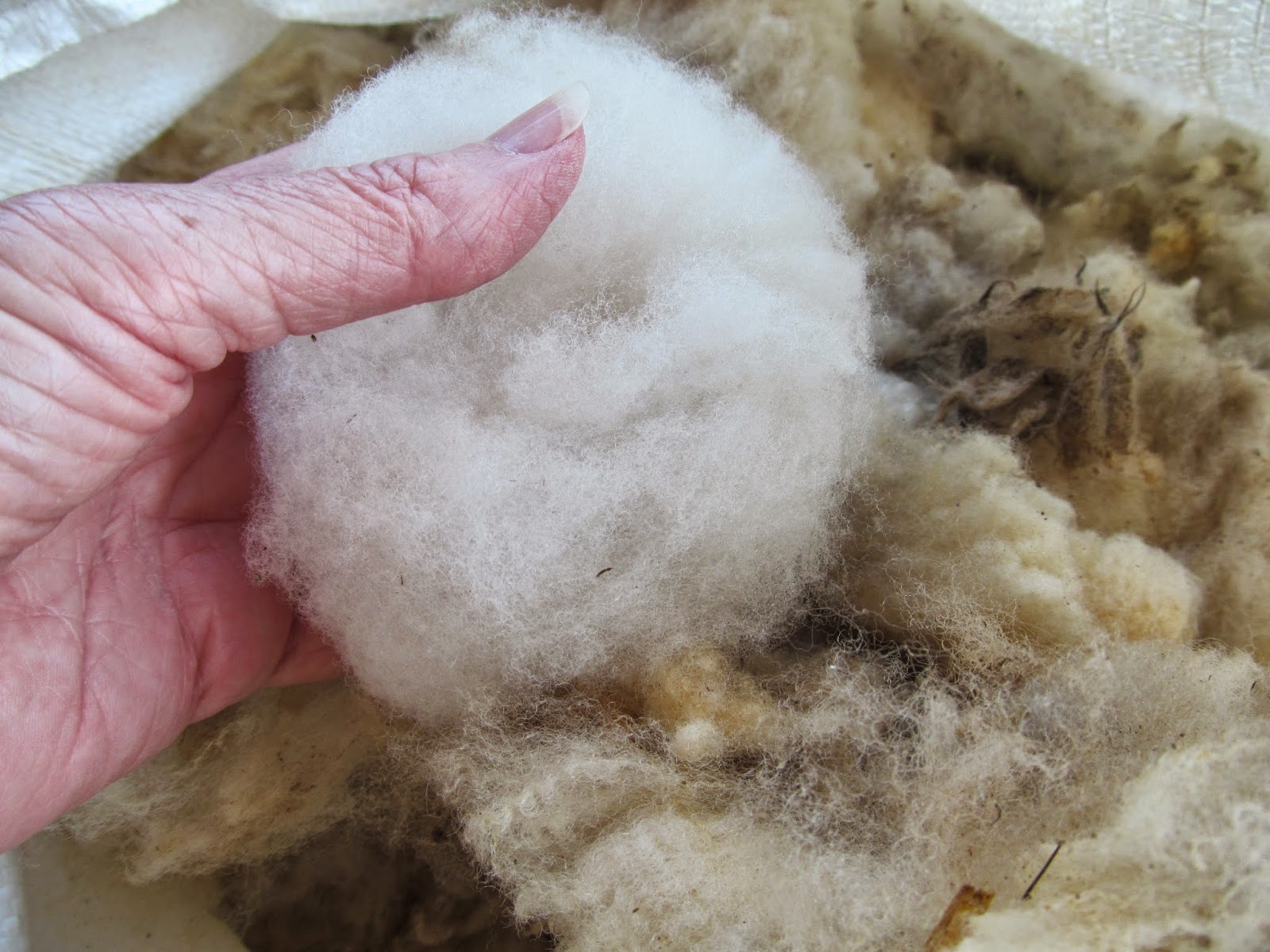 I am so thrilled, the first little bit that I had carded and then spun has turned out beautifully and I now can't wait to get cracking on the rest.  Yes it is labour intensive - very much so.  And yes it is a very dirty job but with guaranteed good weather and having plenty of space I don't have to worry about wet fleece hanging around the house - I couldn't even begin to think about doing this in the UK. 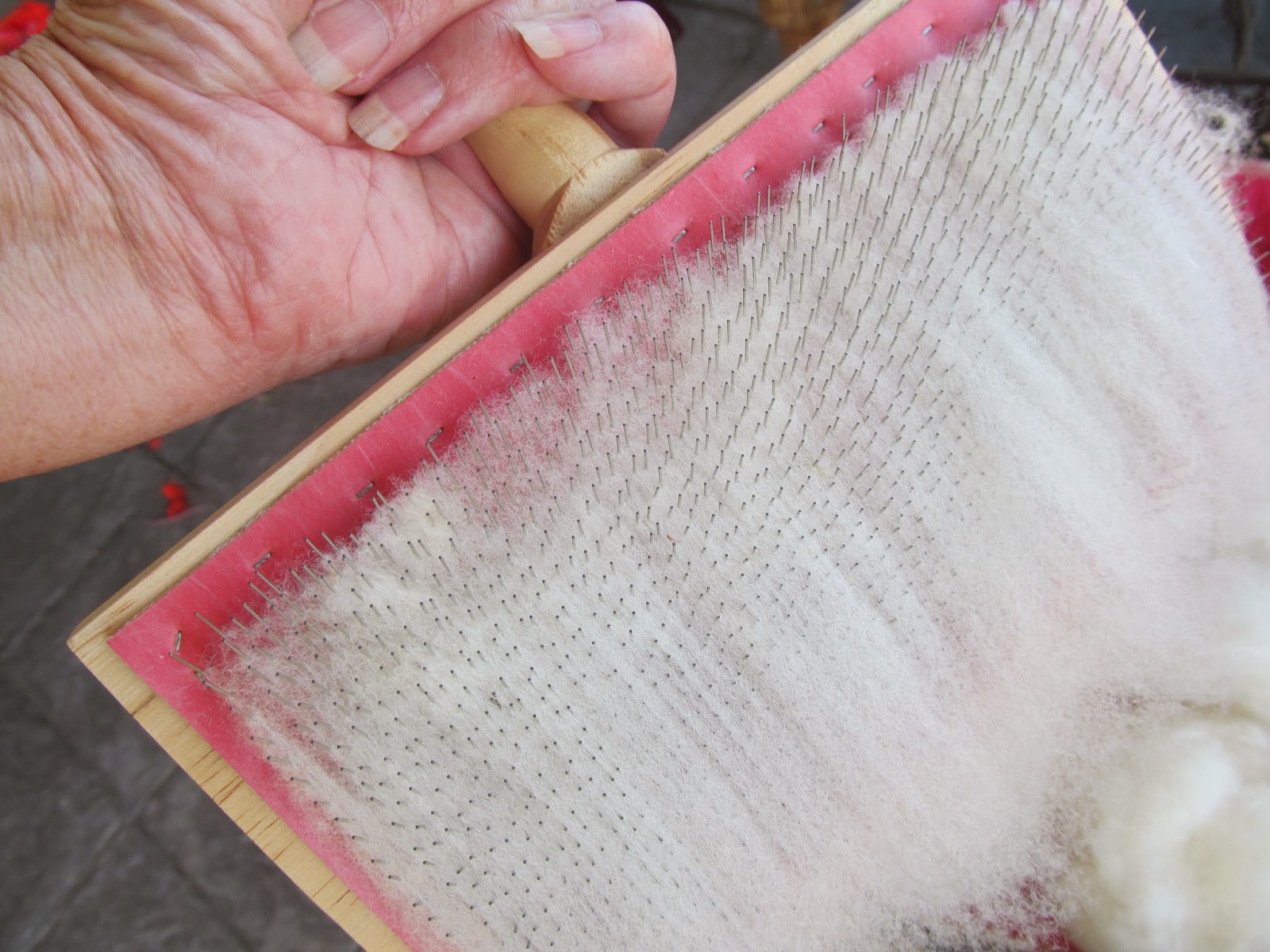 In the meantime, my youngest daughter came from the UK for a short break with us and brought with her some ready prepared fleece for spinning.  I have never spun from commercially prepared fleece before and I must say it took a little getting used to.  The first results were predictably large making a chunky wool (and I plied it as well) which although a little larger than I wanted I am very pleased with it. 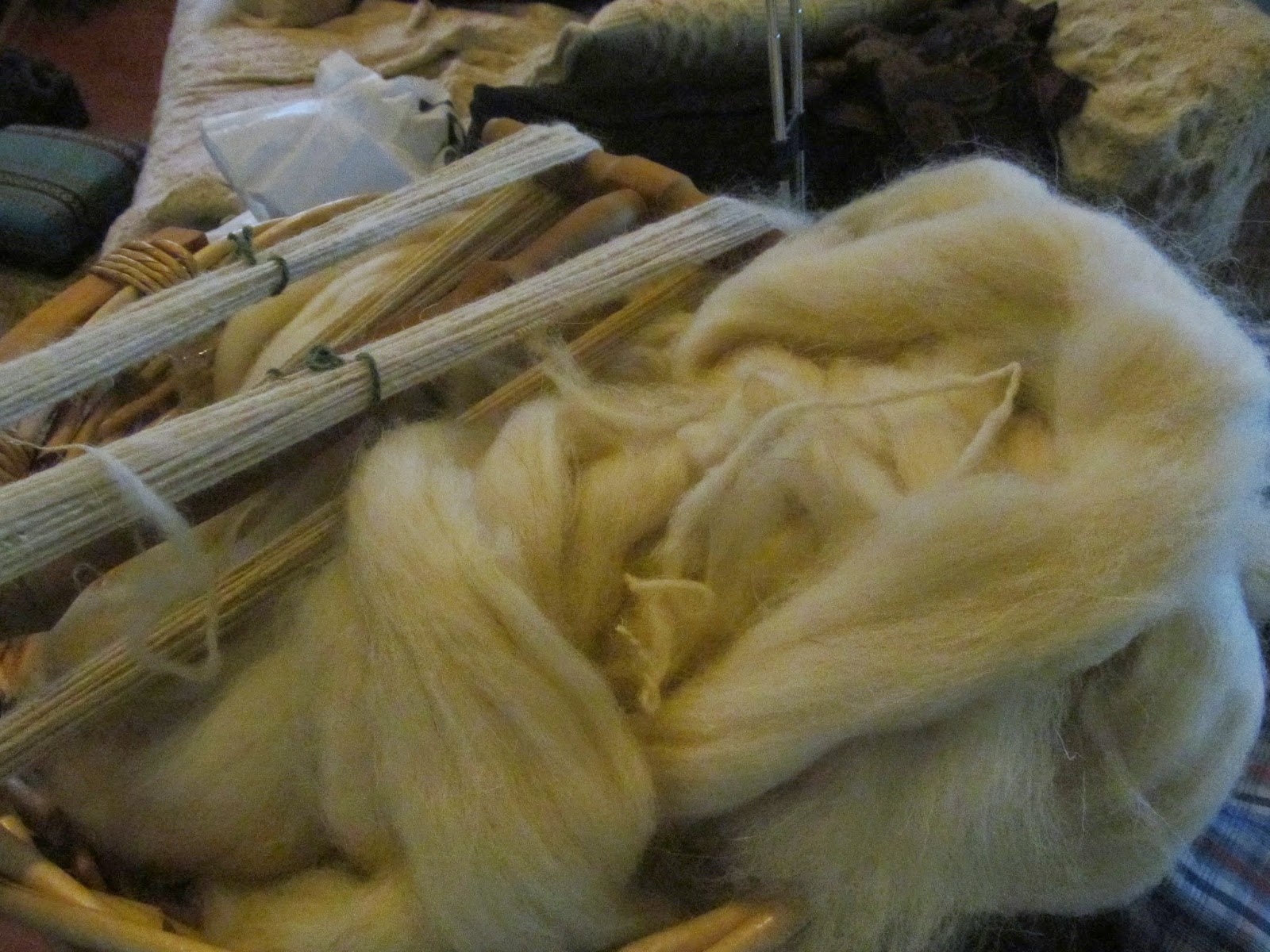 Later attempts are much better.   While I spin I imagine all the different things I could make from it.  In fact I have knit it all several times over into lots of different garments already (in my imagination)... but always in its natural shade.  And so a natural progression leads me to another hobby looming large on the horizon.... I wonder what colour I would get if I try to dye it with olive leaves?  Or with any of the other plants on the finca?  Now what do I need to start dying the wool.... Oh O!  An outside kitchen would be good.... mmm... put that on the To-do list.
Animals Crafts Sheep Spinning Wool