Skip to main content
- April 13, 2015
While Wooster, the cat with the broken leg, was in the clinic in Caceres we did a little site seeing.  Caceres is not my favourite city - actually I don't really like cities at all - and the last time we were there it was raining.  It rained this time too. 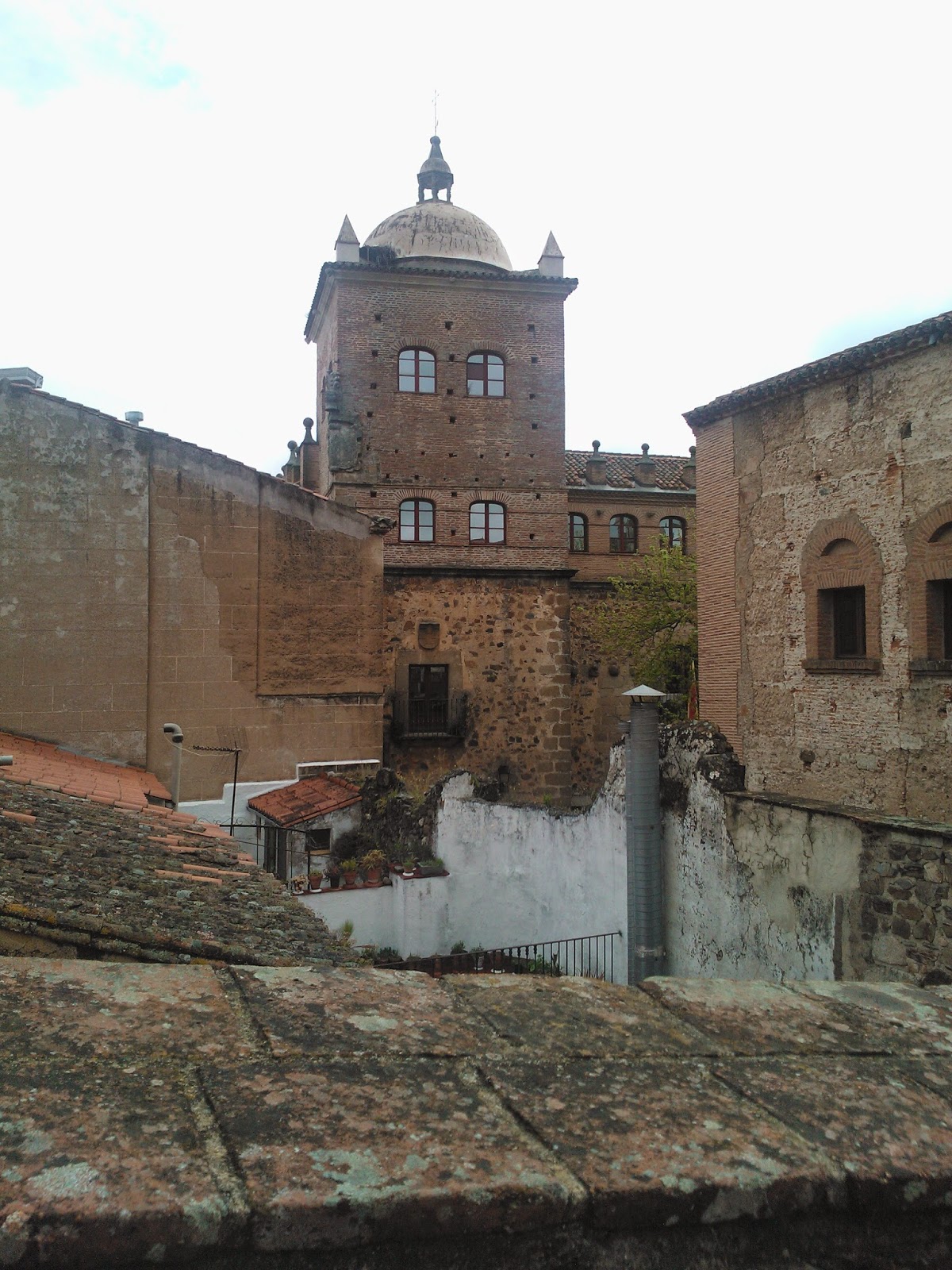 We bimbled around, drank coffee, went into the museum and climbed towers.  Finally we received the phone call to say that Wooster was out of surgery and all had gone well.  Unfortunately we couldn't take him home until 8pm so we came home had something quick to eat, a short siesta and then headed back to the city to collect him. 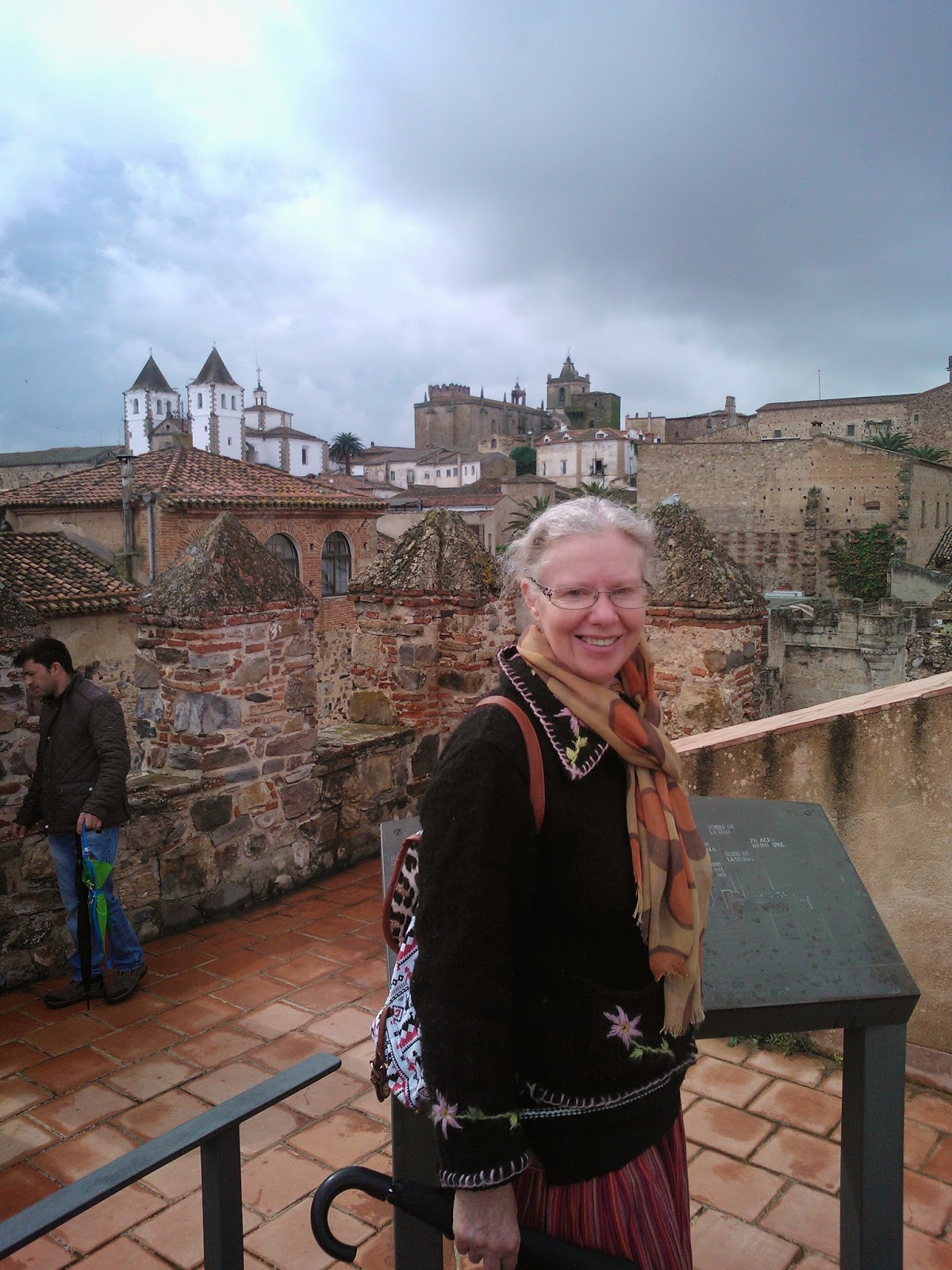 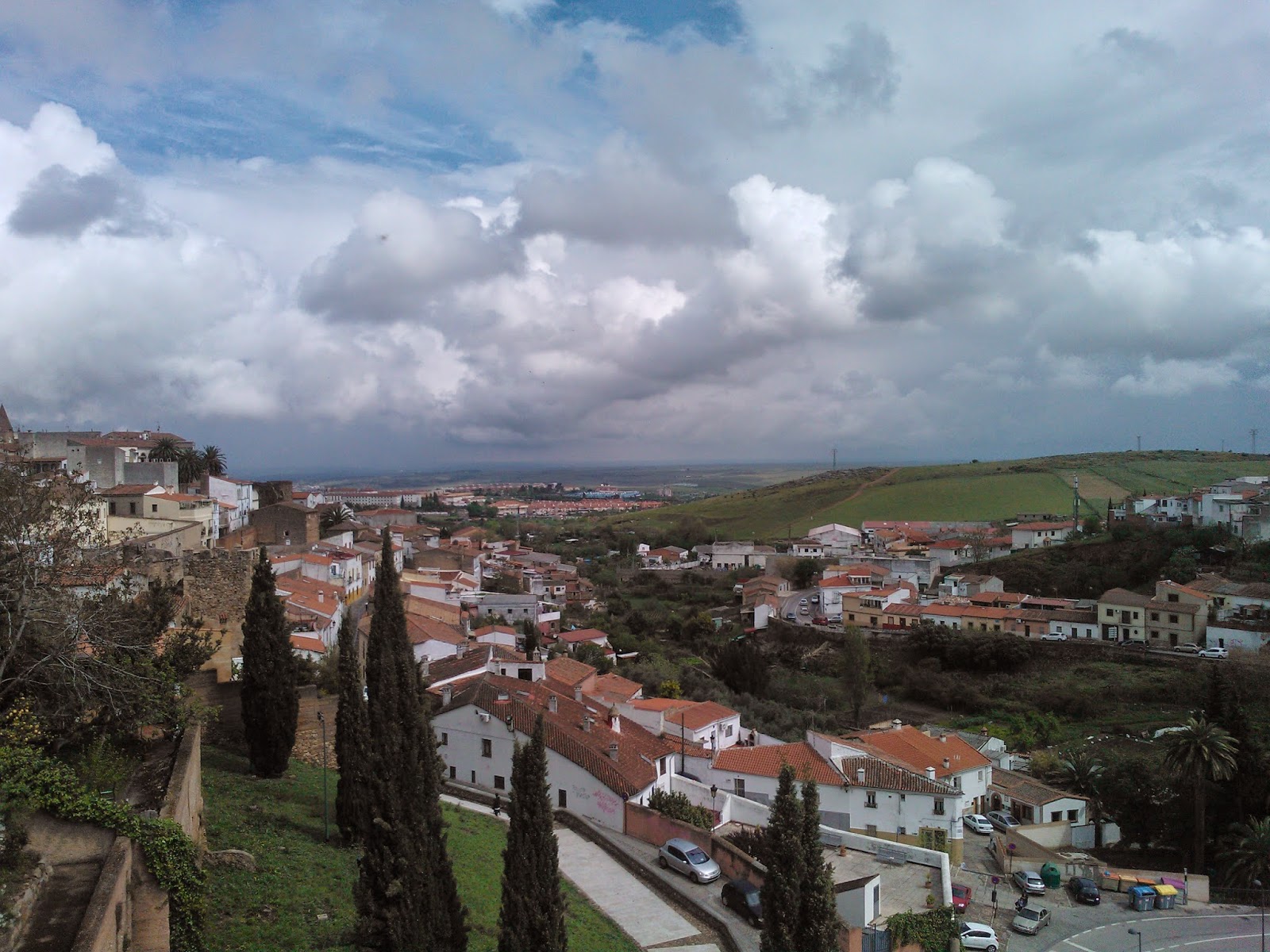 Exhausted.  Wooster appears to be in fine fettle.  He is of course, not in pain which works wonders for the temperament. 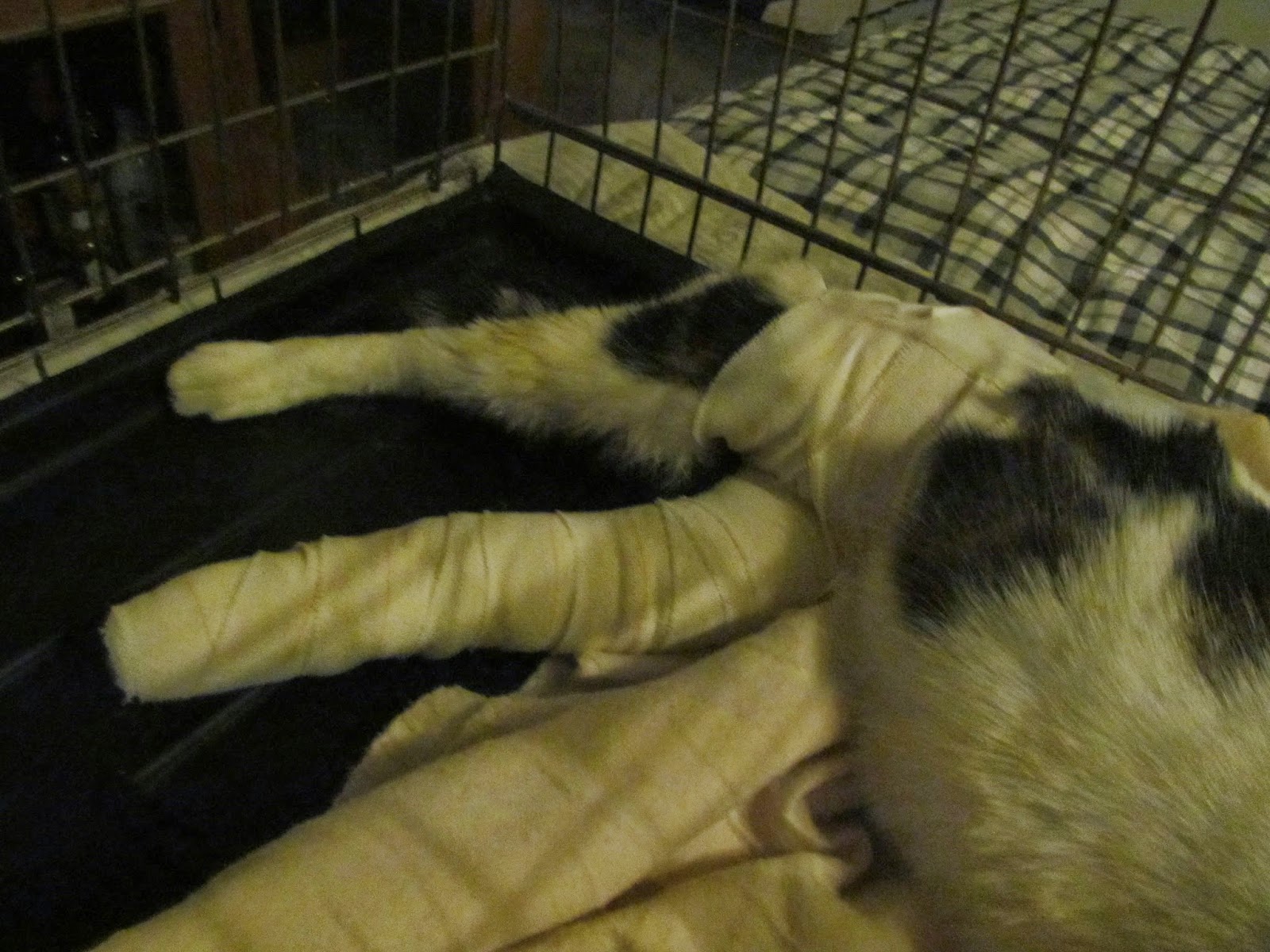 He can't figure out how to walk with his funny sticky out leg.  He can't get into the cat litter tray and so he simply wets himself (and we are supposed to keep the bandage dry!) and doing number 2's seems to be impossible for him as they have taped his tail in the downward position under all his bandaging. 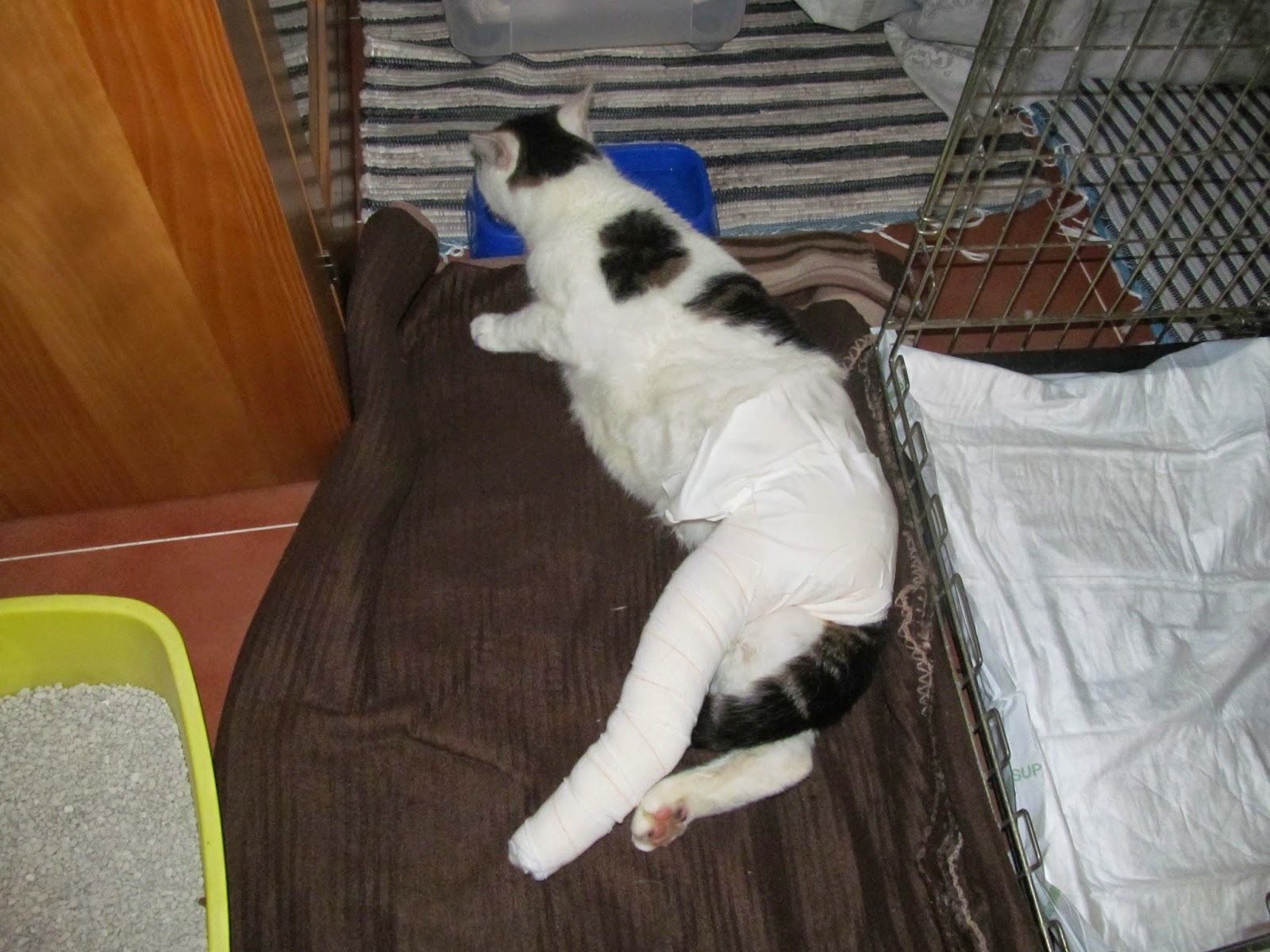 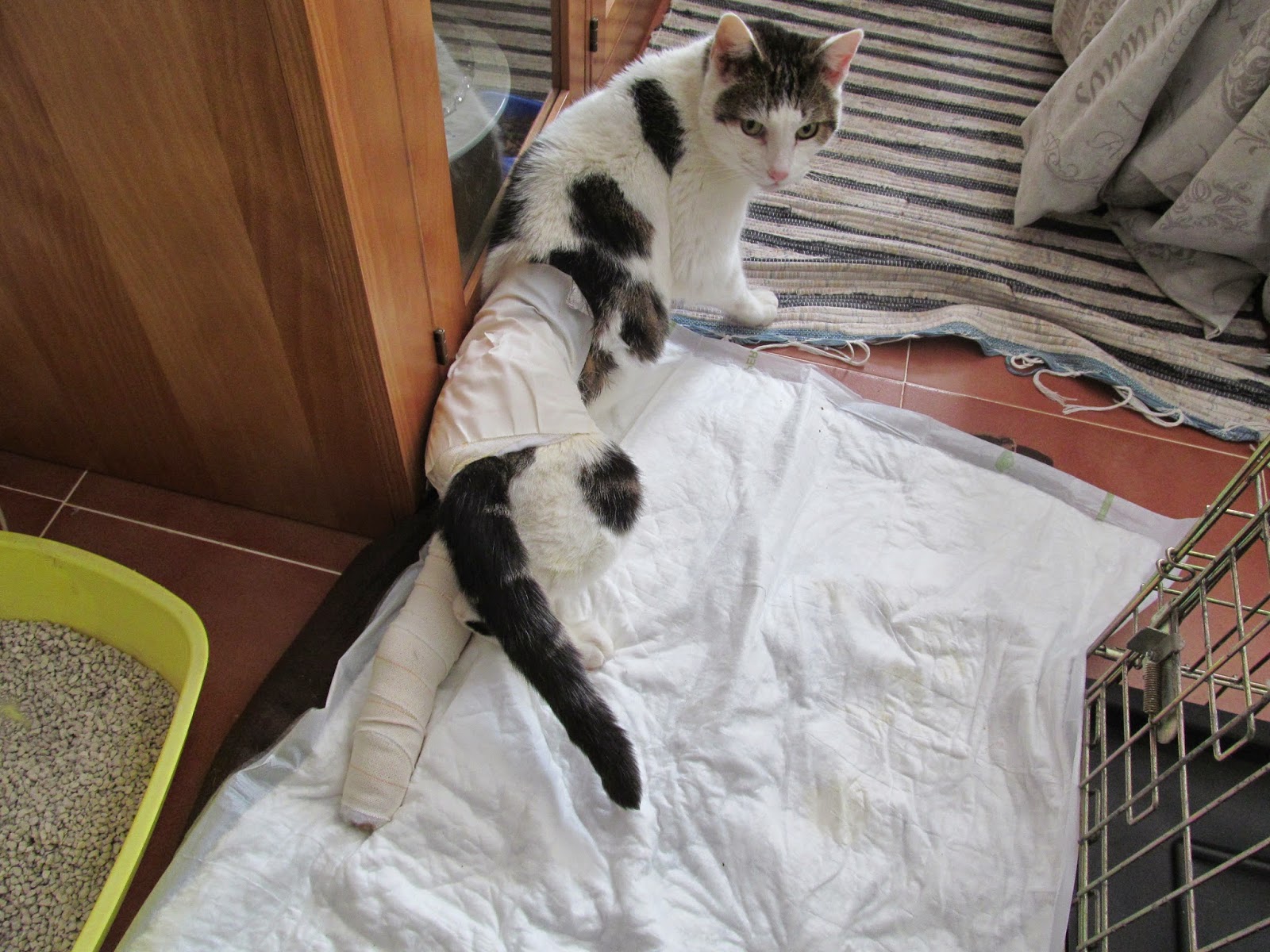 We are back to the vets on Wednesday to have his bandage changed... and we shall try with our ever increasing language skills to explain about the tail situation.  Fergus knows that Wooster is injured and spent the first day keeping him company.  Although it could also have been because we gave Wooster some especially yummy food! 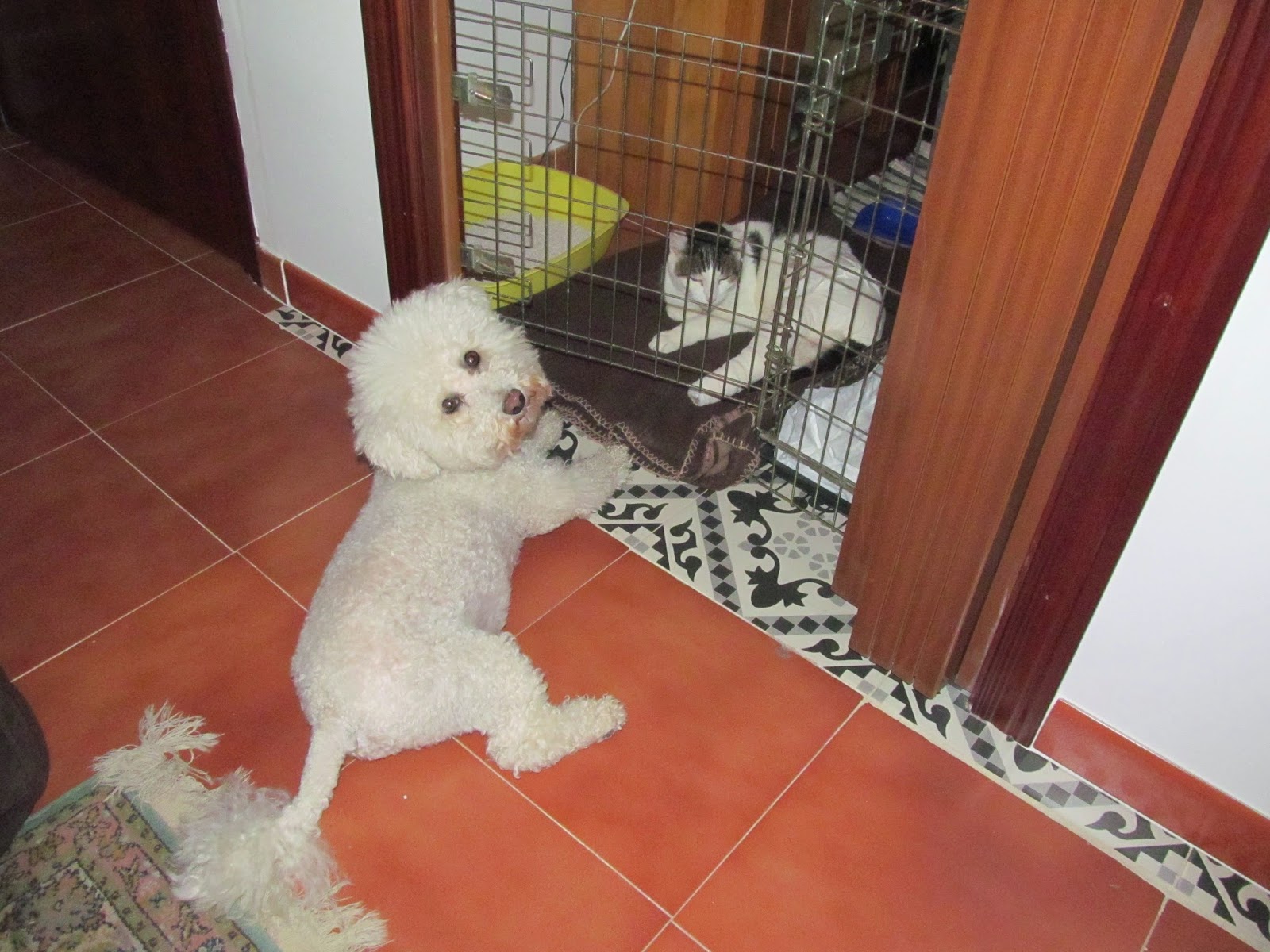 Meanwhile - its all go at Finca La Reina as we have four volunteers staying with us at the moment.  Two are in the bell tent (since the yurt is hors de combat) and two are using their own tent. 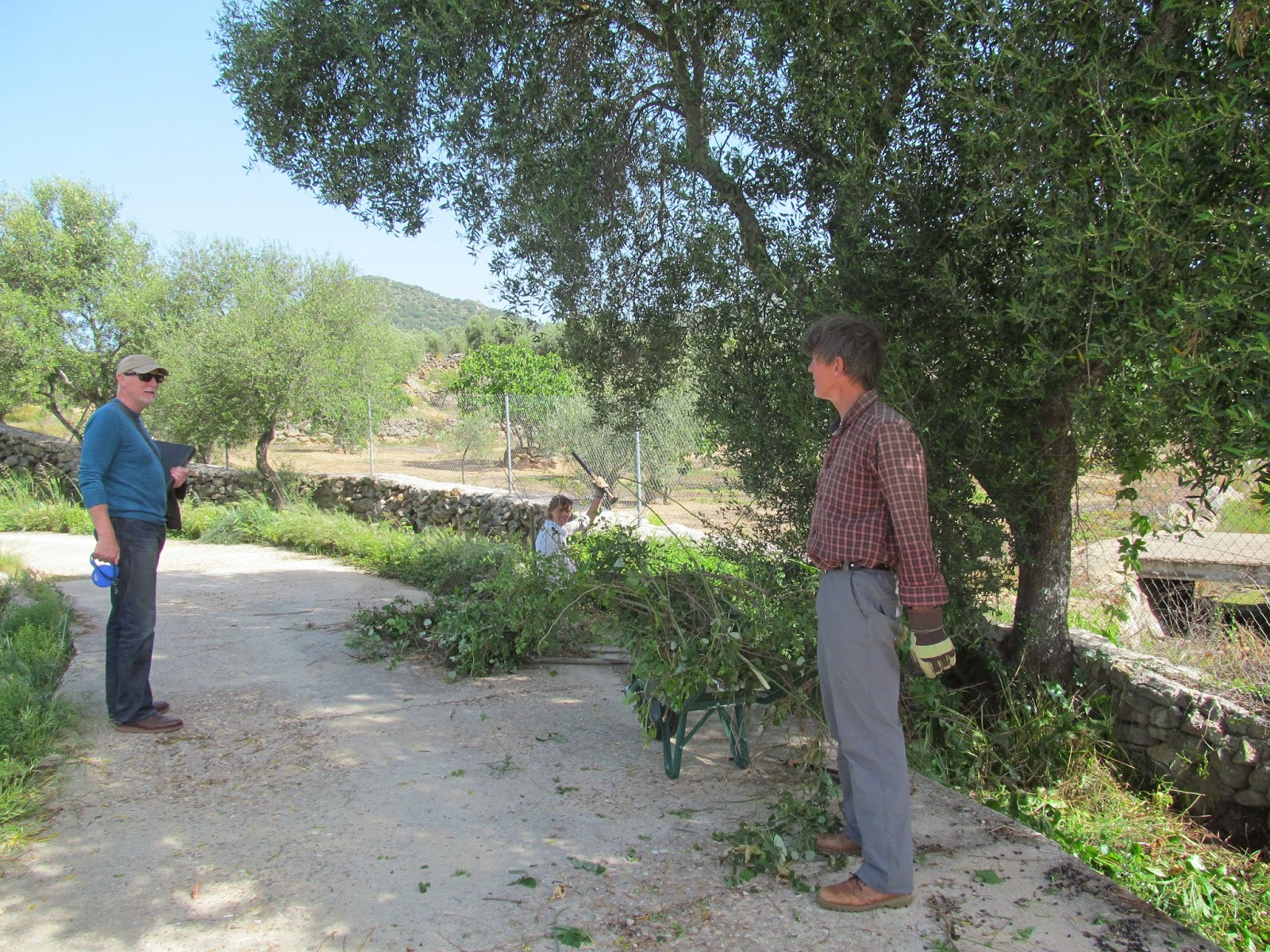 They are all getting on with loads of work clearing suckers and brambles and moving rocks.  All jobs that we don't have to do now!  Thanks guys! 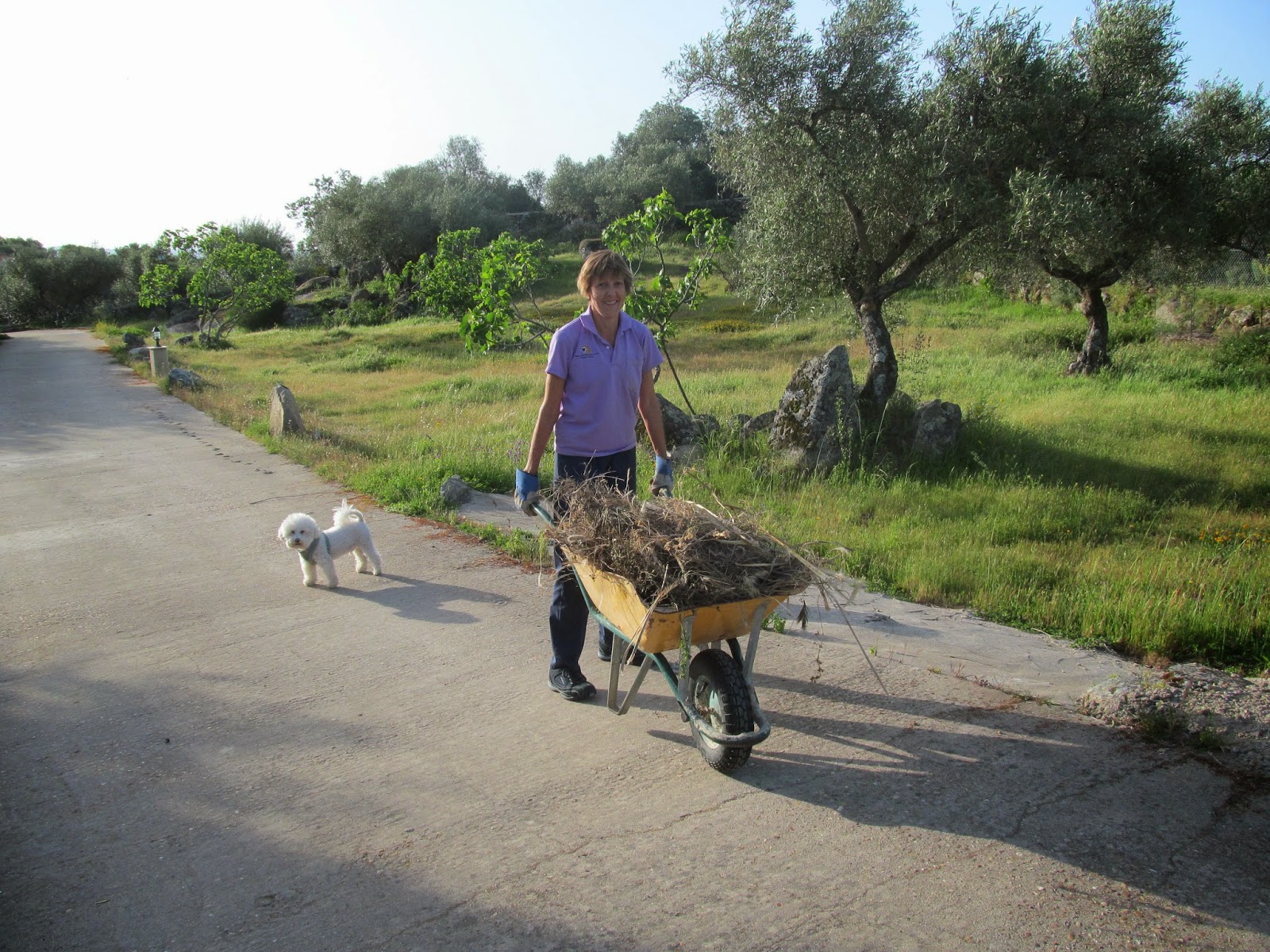 Once the thickets are cleared the real beauty of the olives are revealed. 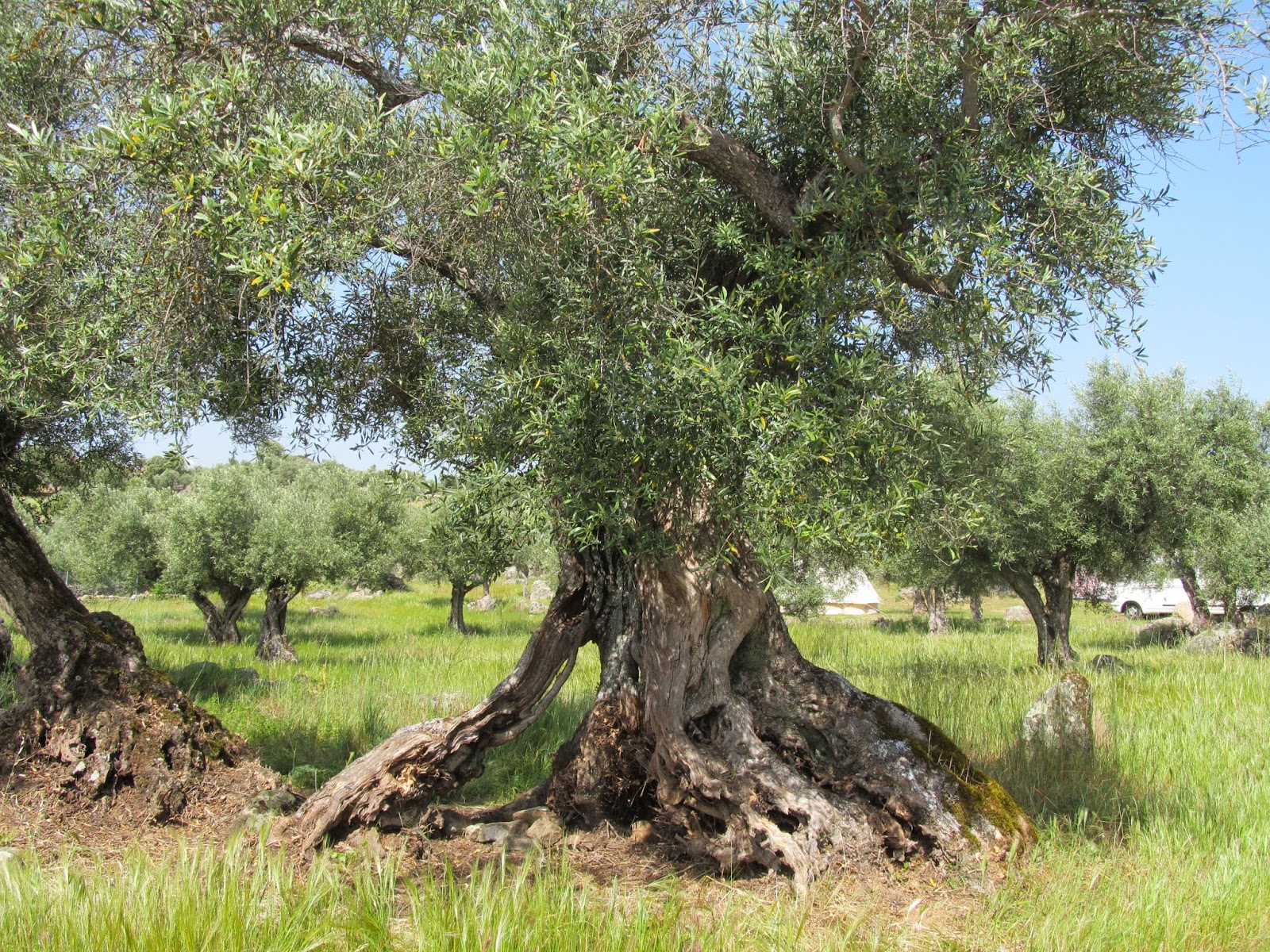 And then.... a phone call from a friend to ask if we had room for a couple of camper vans for a couple of nights.  These Swiss travellers are touring the area and doing a bit of hiking and having read Walking in Extremadura decided that they couldn't leave Spain without visiting this area. 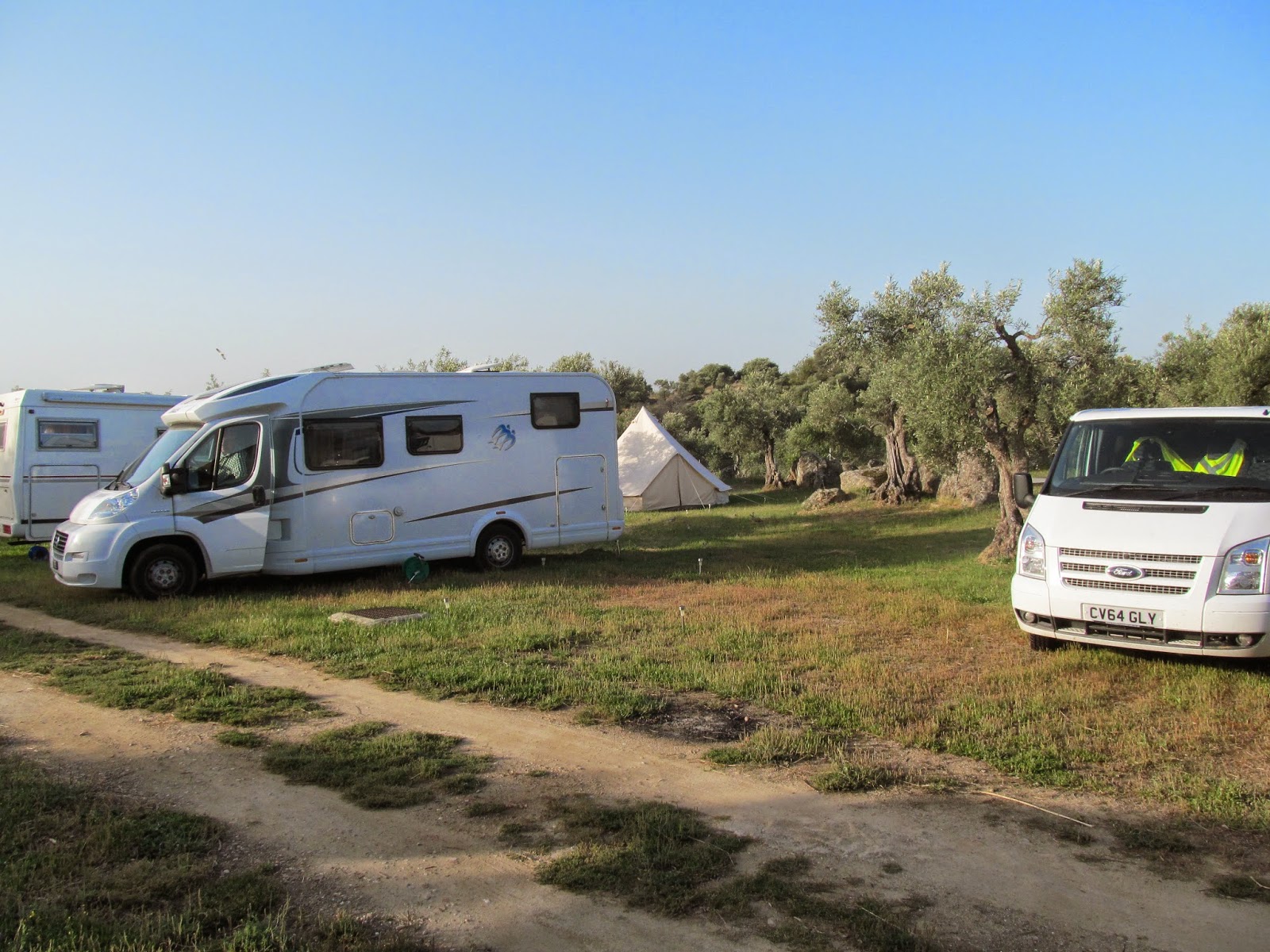 Goodness it looks a bit crowded down there!  But we have plenty of space and once they arrived and picked a spot we left them to their own devices.  From what they said today they love it here and think that we live in Paradise.  Well we think so too but its always nice to have someone else confirm it. 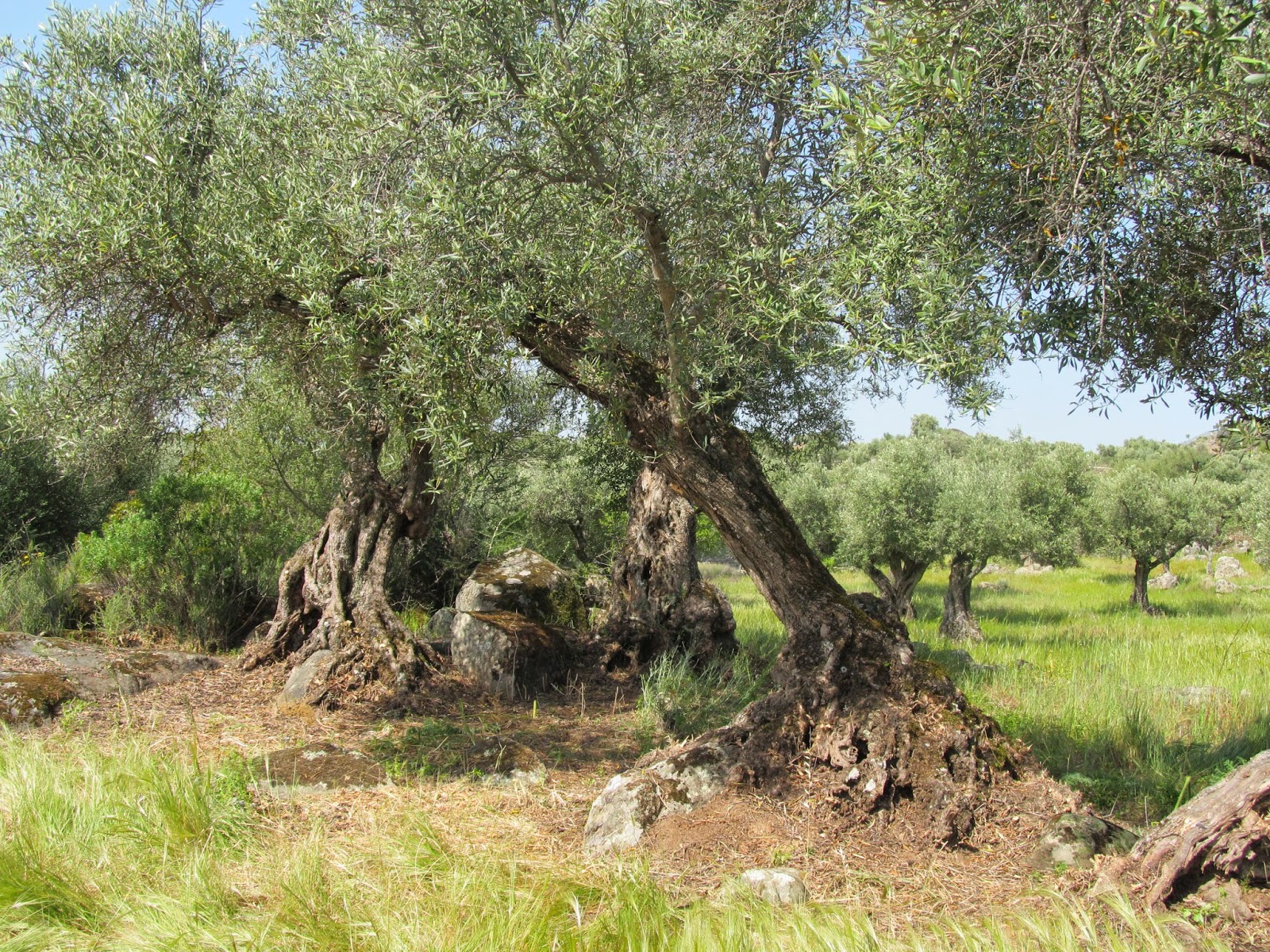 And finally... just look at this amazing field of lavender.  It isn't on our finca but on a friends.  Every year the mix of flowers we get is different.  This year we are very pink, whereas last year we were very yellow and white.  I think this year our neighbour is definitely very purple! 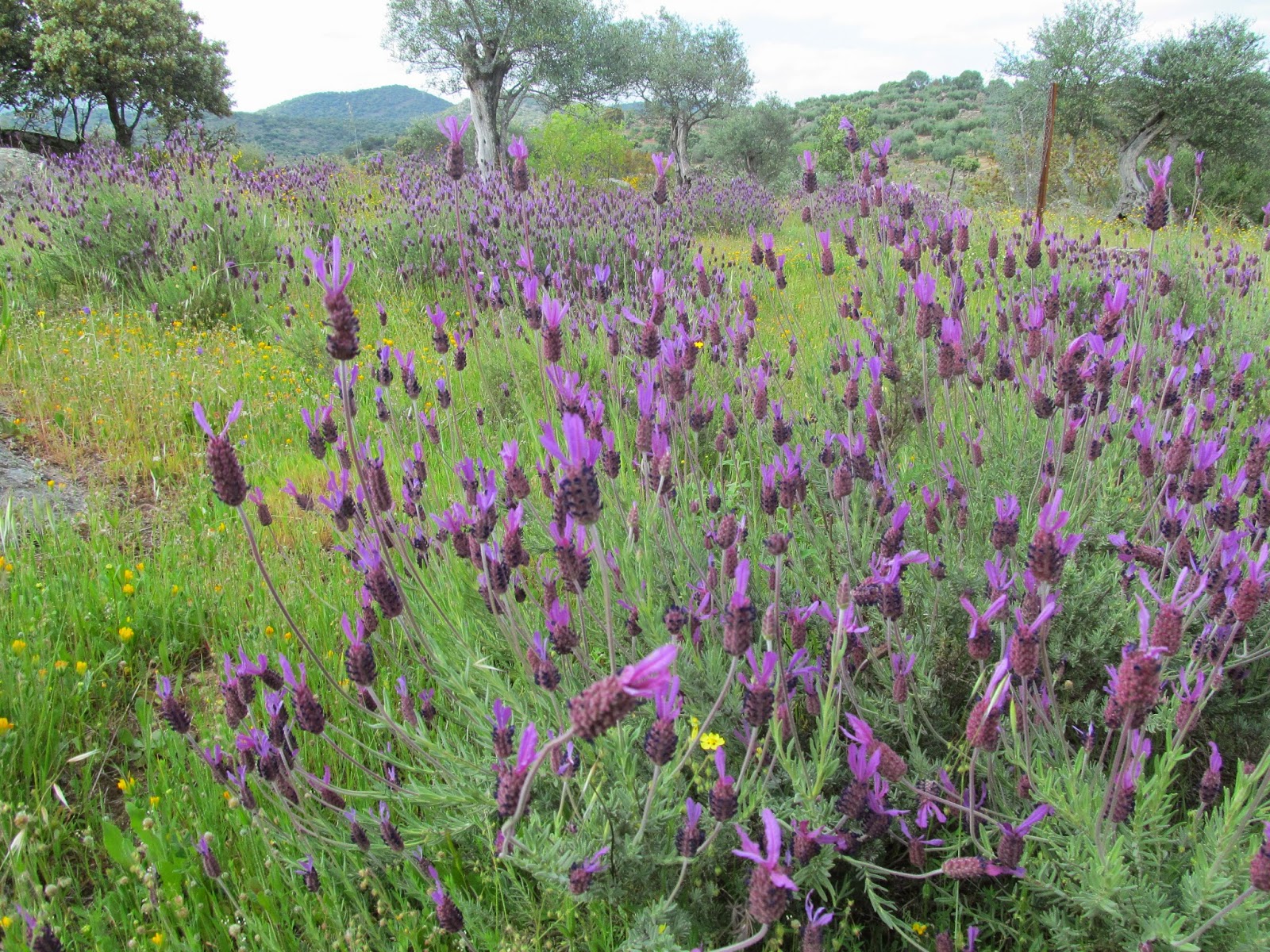