- December 21, 2014
(Warning!  I have included a photograph of the goose bleeding out... if you are squeamish you may not wish to continue reading this post).

We culled the geese yesterday.  Now there is an interesting English word... cull.  It sounds nicer than 'we killed the geese yesterday'.  The Spanish call it the Matanza.  Matanza literally means killing... it has other meanings, bloodbath and massacre to name but two.  Well you get the idea.  I had mixed feelings about the day which got worse at it approached.  I had hoped that after the good experience I had at last year's Matanza I wouldn't experience any anxiety but I did.  My anxiety grew as the day approached until, like last year, the night before I was unable to sleep. 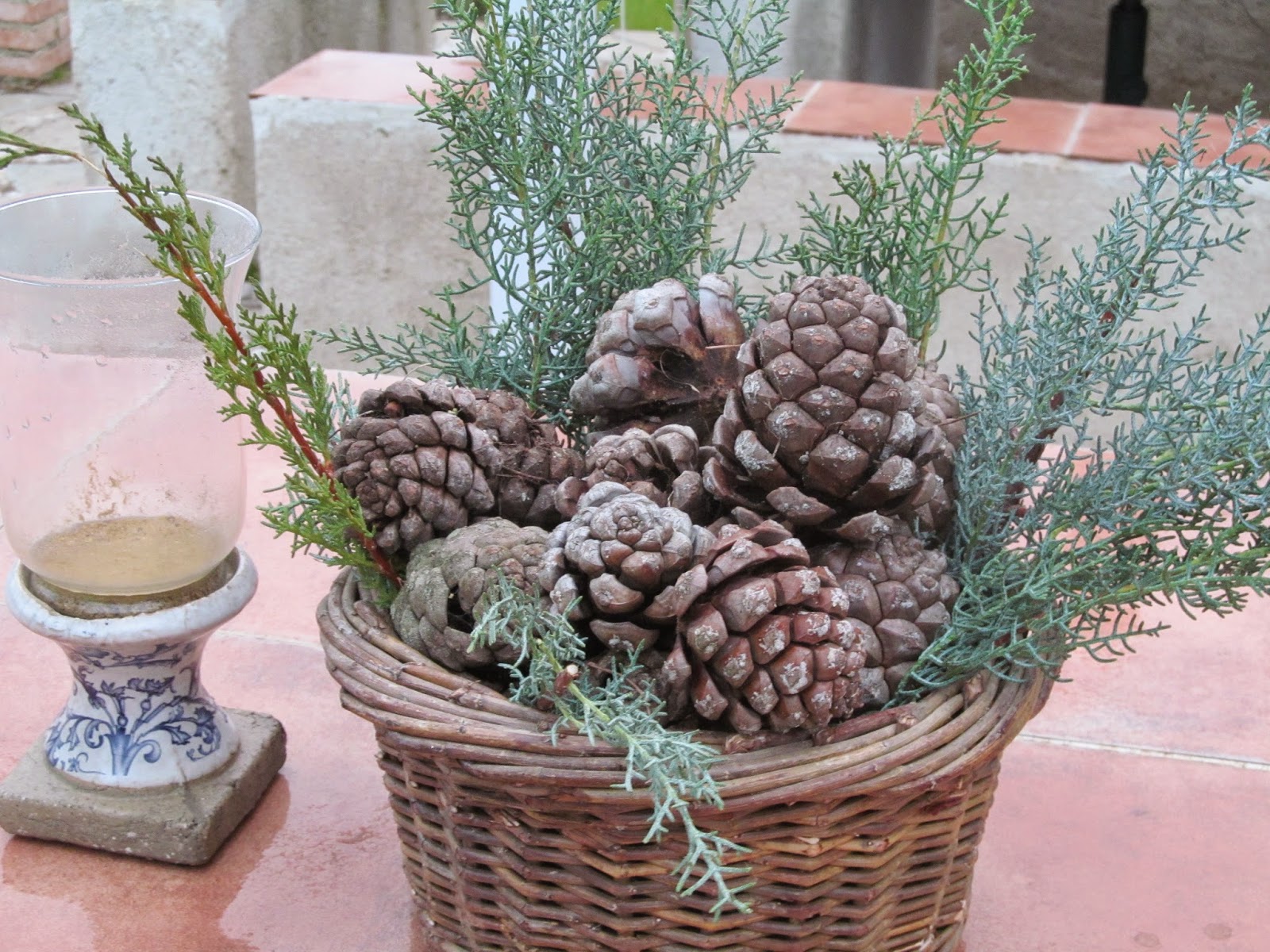 As a distraction from the actual killing I busied myself with making soup and mulled wine and spiced apple juice for the non drinkers (all recipes on Food from the Finca), making Yule tide decorations and with the preparation of everything that would be needed for the actual killing. 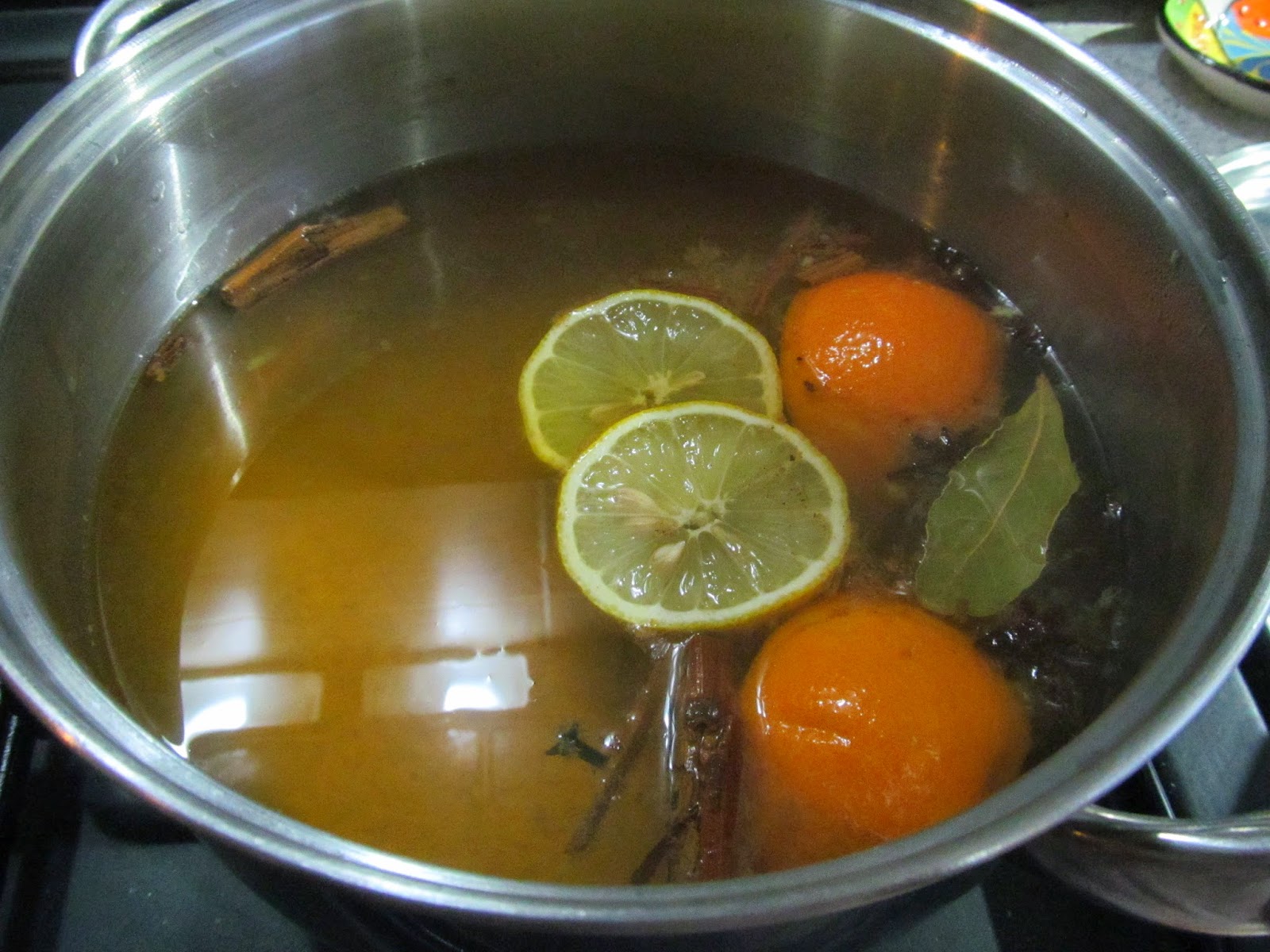 Last year we killed the four youngsters leaving the parents to provide us with this years Christmas dinner.  This year we made the decision to kill ALL of the geese.  Including the four that we named. 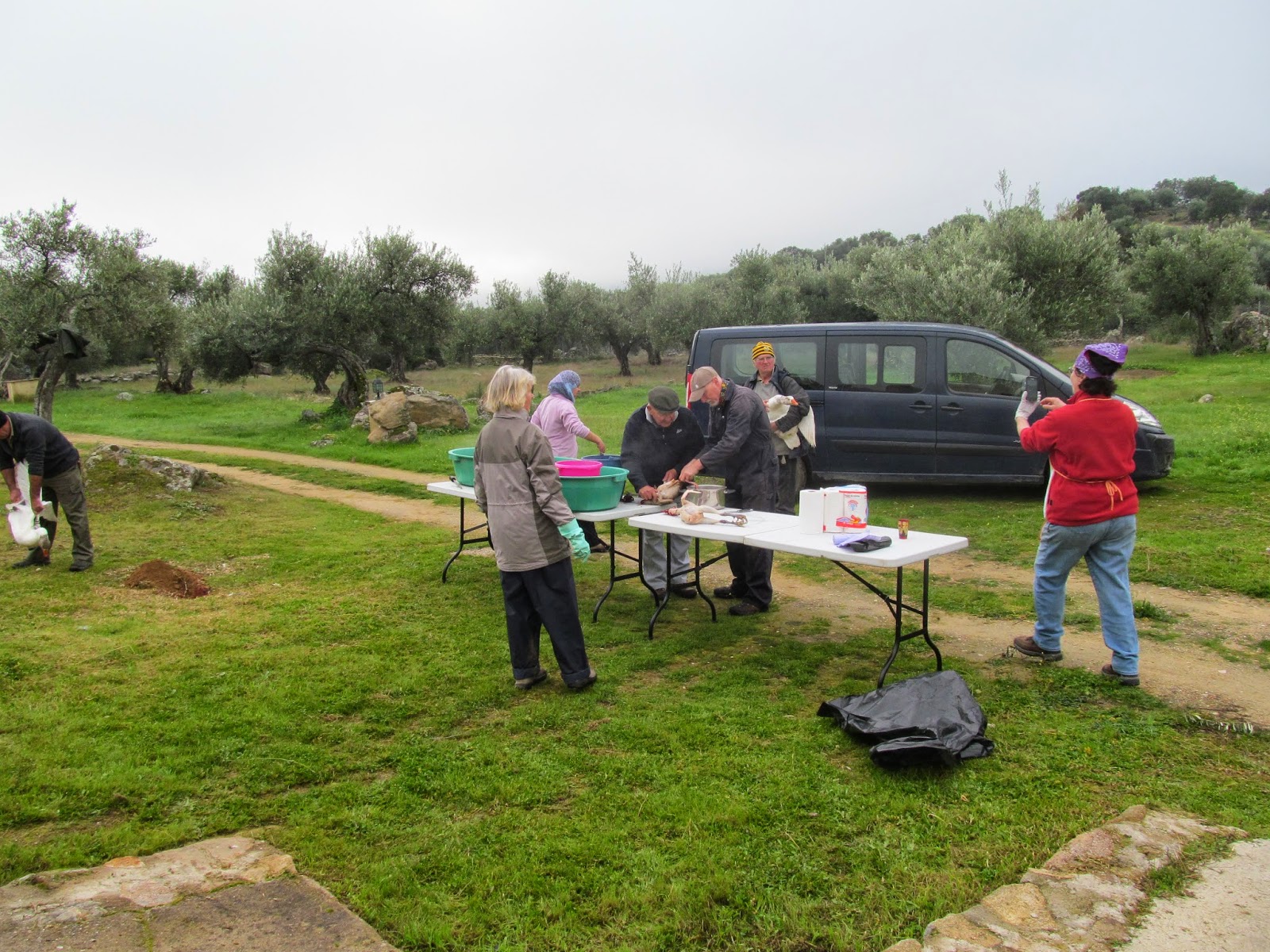 Do I have to justify this?  Well I shall.  We had planned to keep the gander, Alex, and his mate Maggie and also the two that I hand reared, Carmen and Miranda, to make a sort of little family that would provide us with loads of eggs next spring and perhaps lots of goslings to fatten up for Christmas.  Geese do not thrive in small spaces so we were very happy to let them go free range.  We discovered as the year went on that this wasn't the plain sailing that we expected. 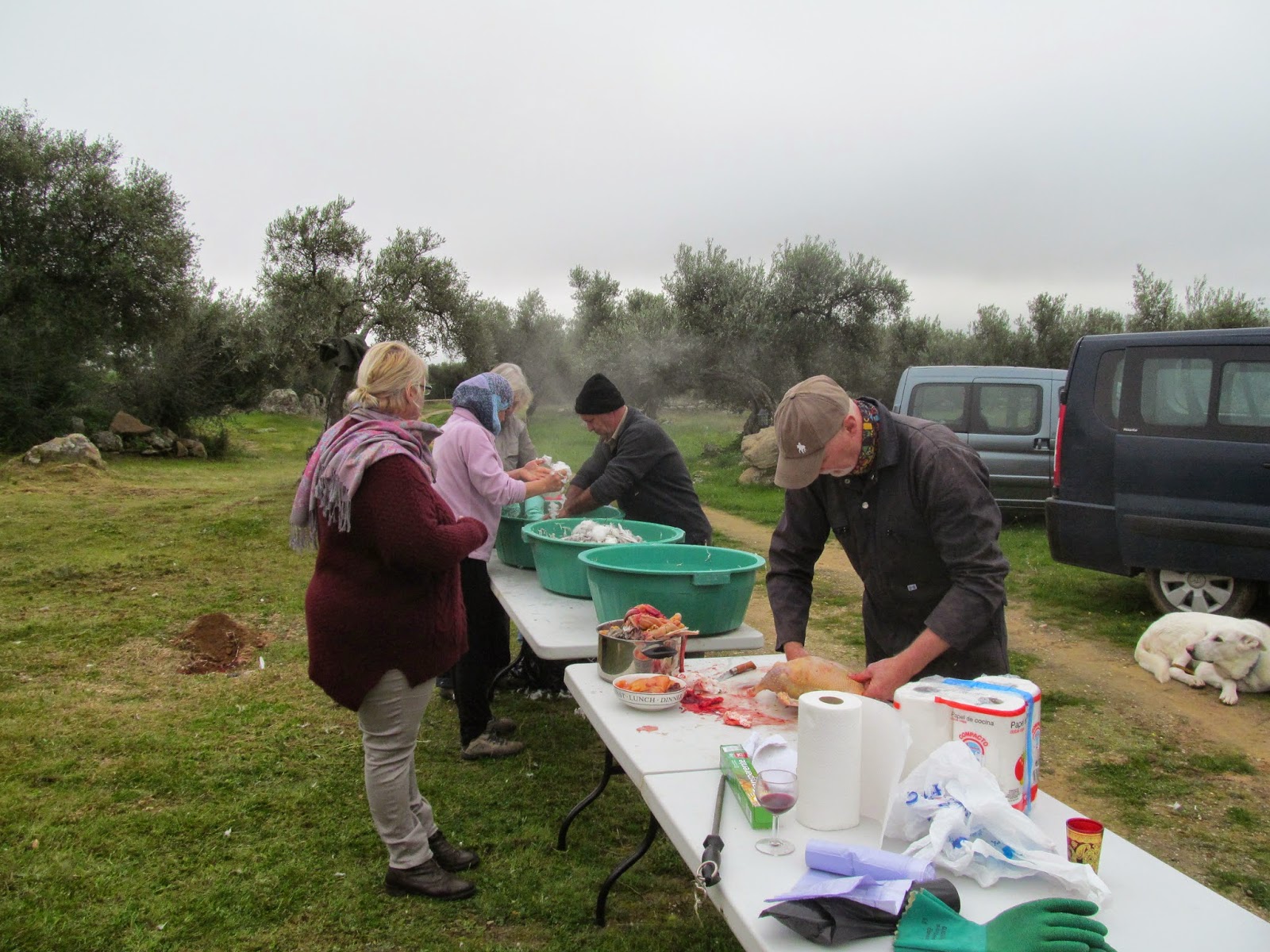 The production line... from plucking at one end to butchering at the other. 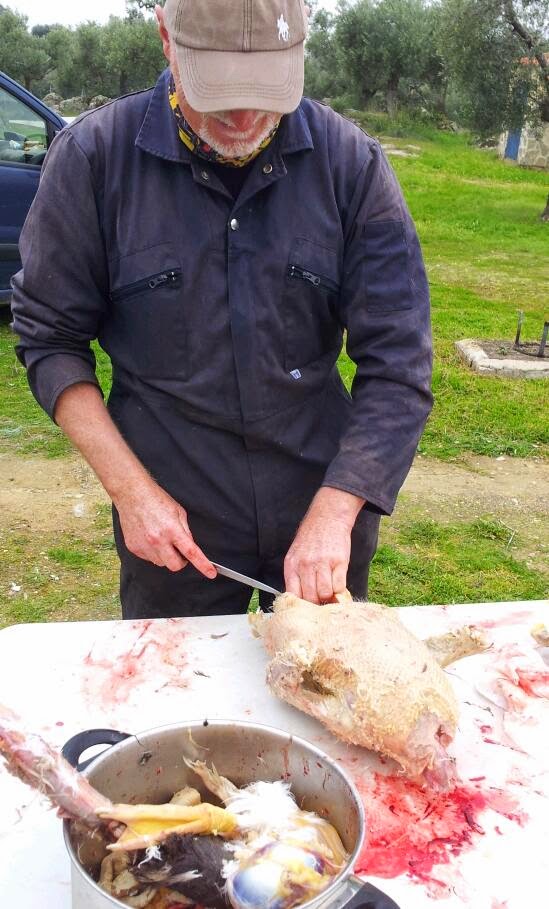 In the summer we have watering issues.  The stream dries up and the geese have to be provided with large buckets of fresh water on a daily basis.  This proved to be a lot of work.  As the grass dried up and they were left with seeds to eat they started looking at other greenery and I now have several 'sticks' that used to be young trees and bushes... my herbs were decimated (one of geese is very well seasoned with thyme from the inside!)  I was only able to net and protect a very small number of plants as the amount of netting and fencing required became just too expensive. 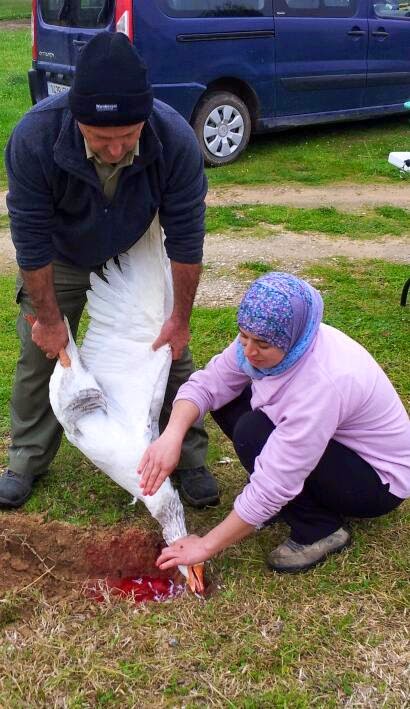 The goose is dispatched quickly and quietly. 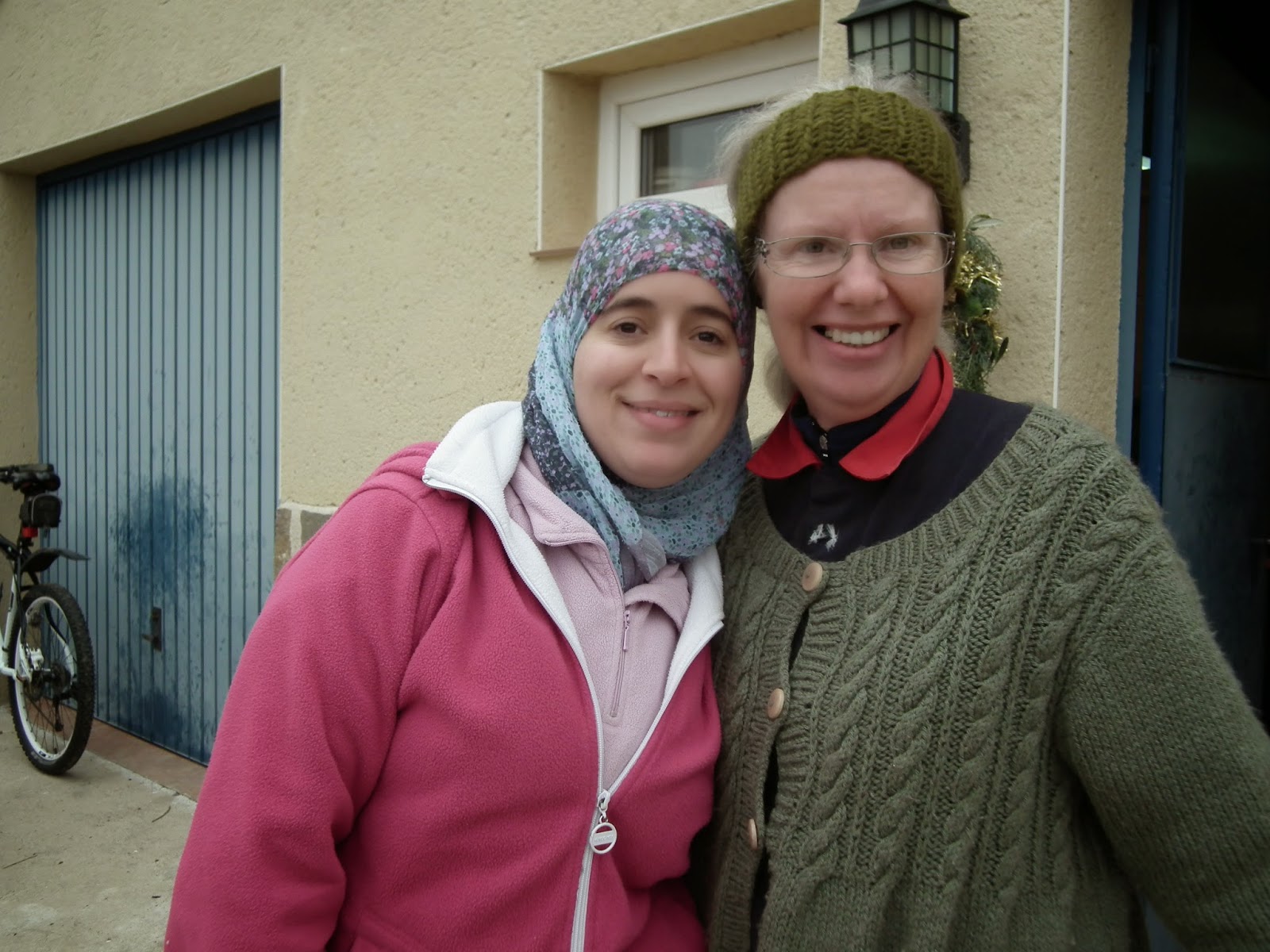 On top of this... they became very noisy.  There was nine of them altogether and the two that I hand reared were not ever really accepted by the rest of the flock so there was constant squabbles and fights between them.  Carmen my little hand reared gosling grew up to be a Frankenstein... every time I appeared she screamed... and I mean 'screamed' blue murder.  It was really unnerving.  Then she began attacking me!  I ended up having to take a stick with me to the washing line.  Her aggressive behaviour was pretty much the last straw... something would have to be done. 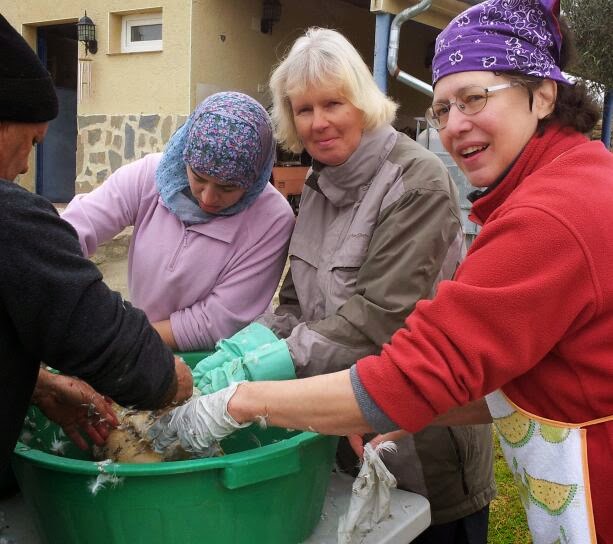 We kept thinking about fencing an area off to keep them in but then realised that we would have to supplement their feed during the lean summer months, along with the watering issues this would prove really costly and a lot of work.  The other alternative was fencing ourselves in and letting them roam.  Sadly the goose dinner is not worth it. 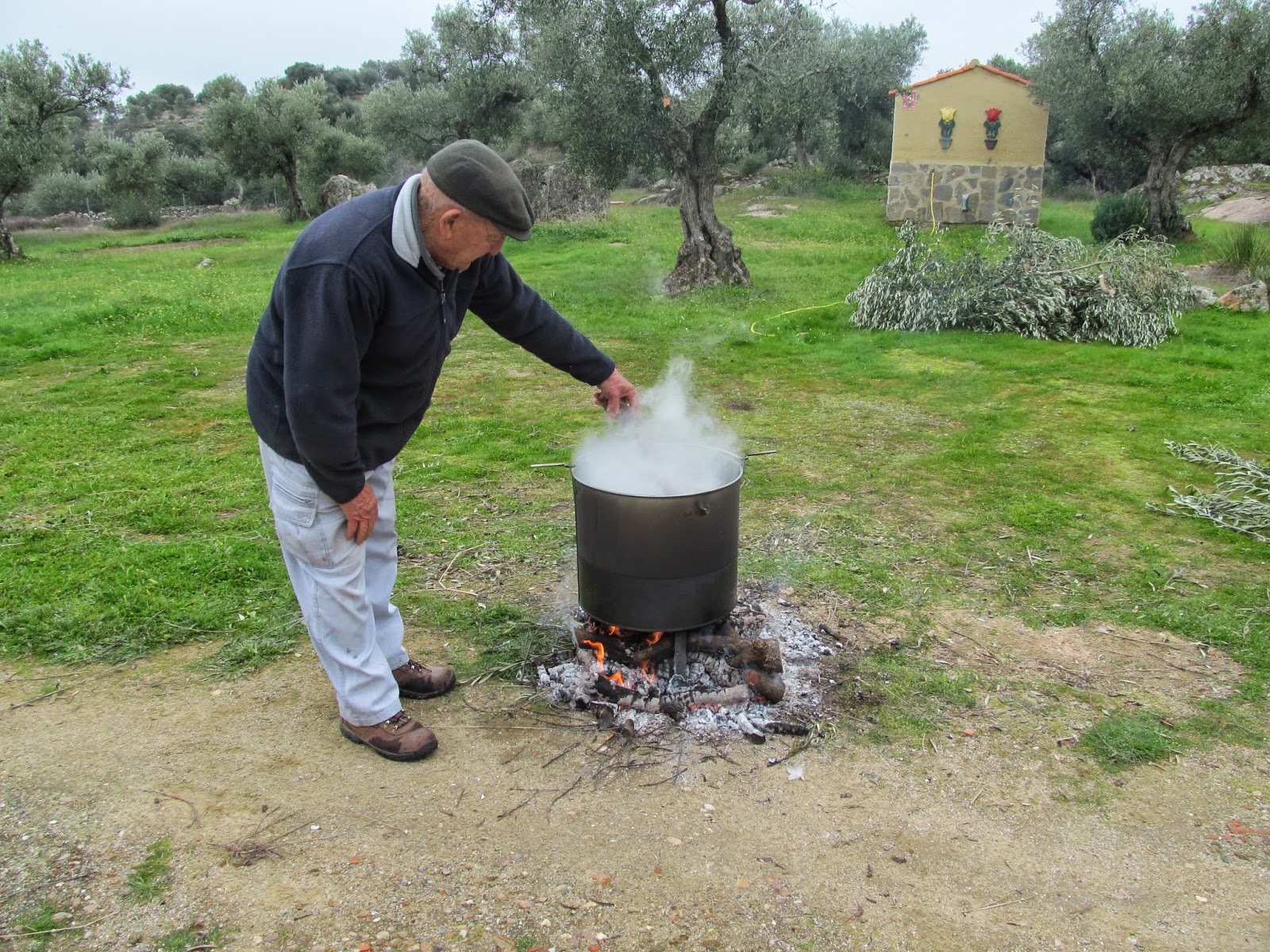 Agosto heating water for the plucking.

So today the finca is very quiet and peaceful and we feel like we have our lives back.  The cull itself was a very sociable occasion, we had lots of helpers and we couldn't have done it without them.  I enjoyed seeing everyone and I am very happy to have four geese and two cockerels in the freezer and one goose resting in the bottom of the fridge for Christmas day... but sad that our goose experiment was not as enjoyable as we had hoped.  Those who helped were offered a goose to take home but two of our Spanish helpers turned them down.  They did so much work on the day and were content with just our thanks as reward. 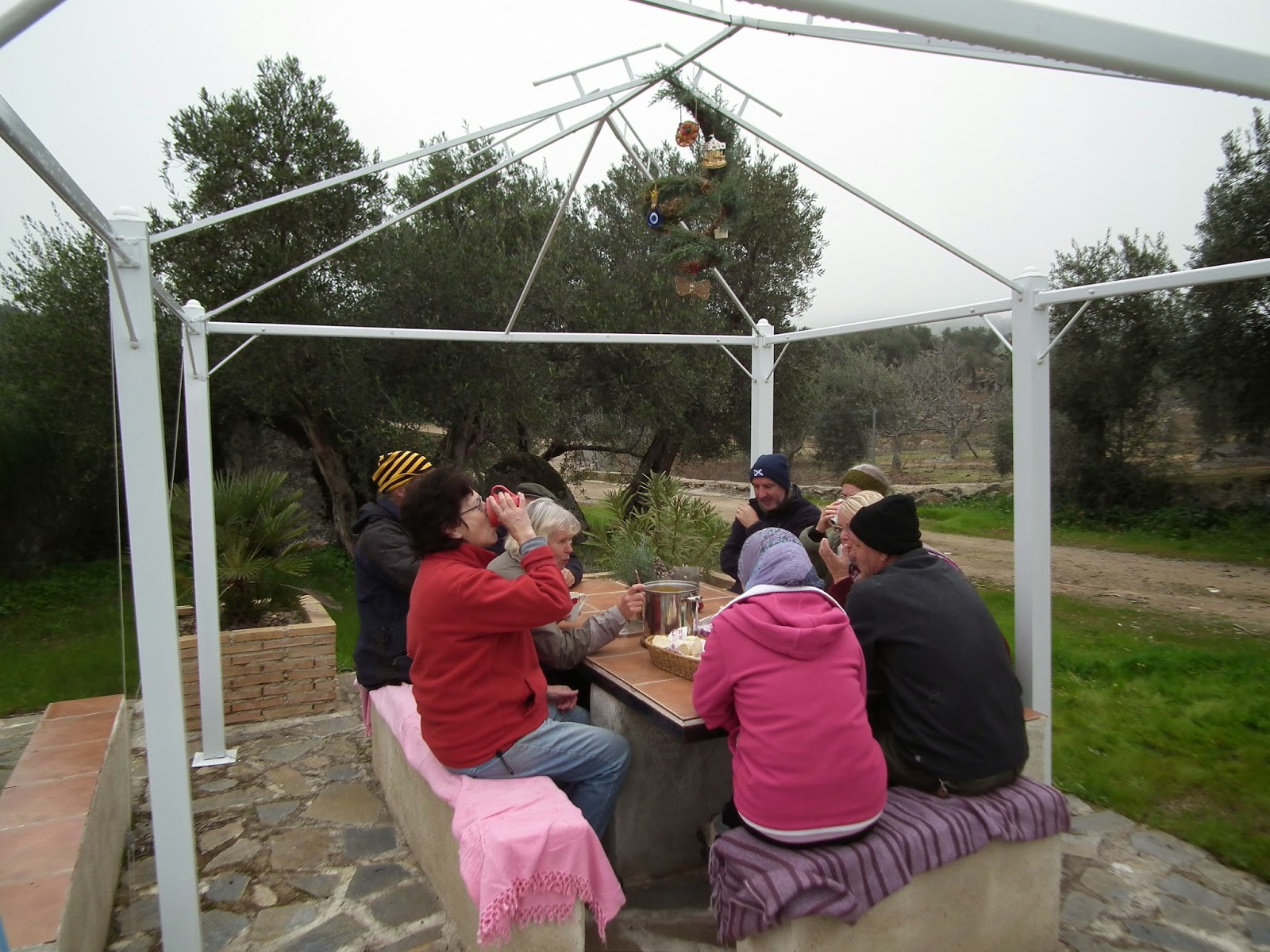 Around the table with soup and cake afterwards, Agosto announced that if we couldn't speak Spanish at next year's Matanza the non Spanish speakers would have to be sent home (to England one assumes!)... we all laughed, but there are no plans for a matanza next year... no geese.  Does anyone know... are turkeys aggressive?

Farming Festivals Geese life the universe and all that What is a Technobilly?