- August 22, 2014
You will remember a little while ago we lost three hens to a fox.  Leaving us with one little white hen and Raul the cockerel.  We had planned to get another couple of hens to keep them company and to save our poor little white one from being 'ill-used' by the cockerel.  Before we got around to it a friend has donated us a little black hen who is the lone survivor of a predator attack on her finca - again in broad daylight but they suspect a bird of prey rather than a fox.  There are dangers to letting your chickens free range over here. 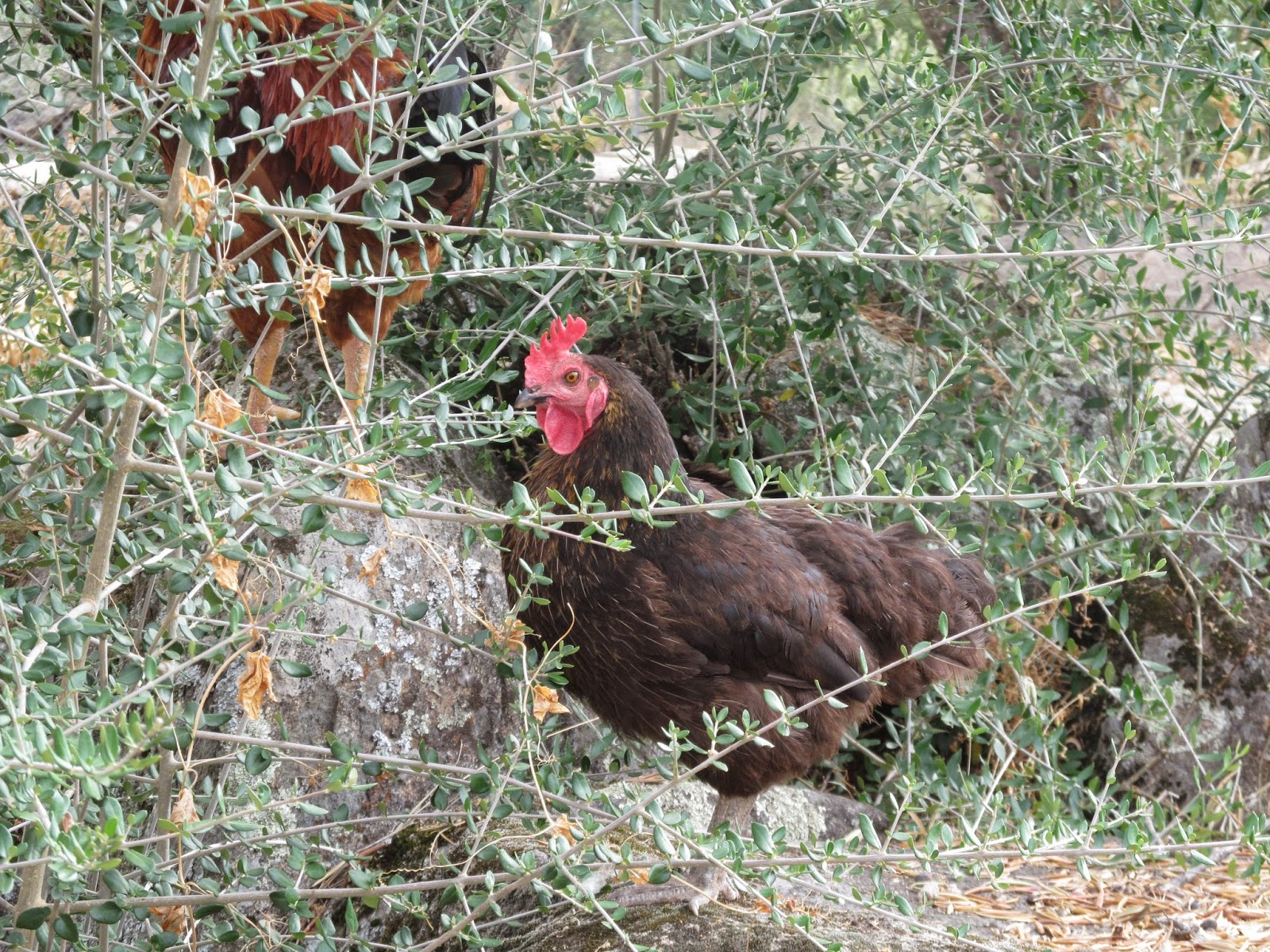 We popped the new girl in with our existing hen and cockerel overnight and the next morning when we let them out they were a little 'menage a trois'.  There has been no fighting and no unpleasant bullying which I was concerned about.  I have read that the cockerel is the one that keeps the hens in order and that there is more likely to be fighting if you don't have a cockerel.  Raul has been more than kind to the newcomer... he calls her over to point out a tasty treat he has found and he fluffs his feathers out and displays with a little stomping dance... we think she's in love... but then who wouldn't be?  He's a handsome fella! 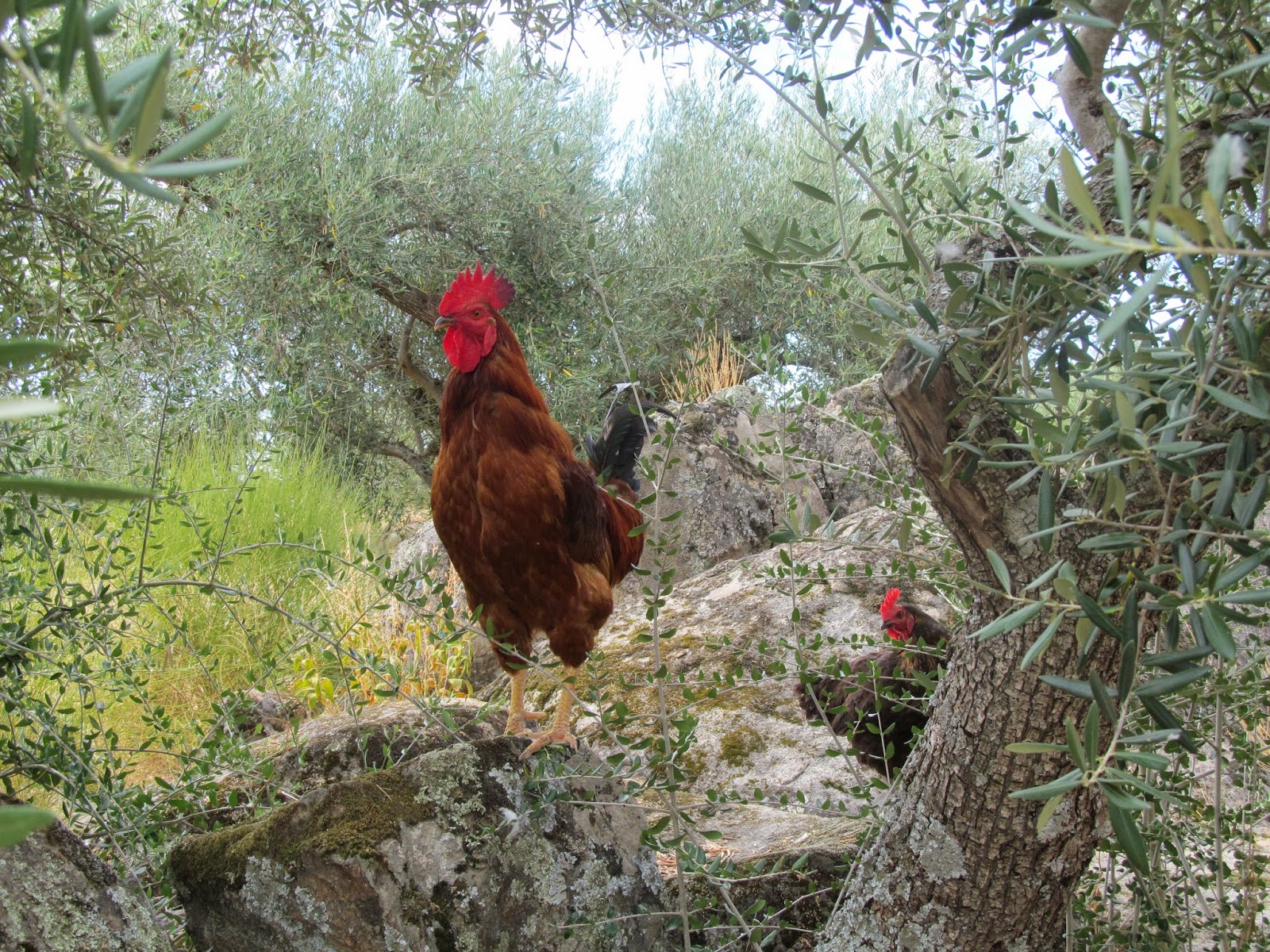 All is not love and peace with our Castilian black flock.  This morning the two Castilian cockerels started a fight that went on and on and on.  And because they are so evenly matched we began to worry that they wouldn't stop until one of them was injured.  We thought it best to remove one. 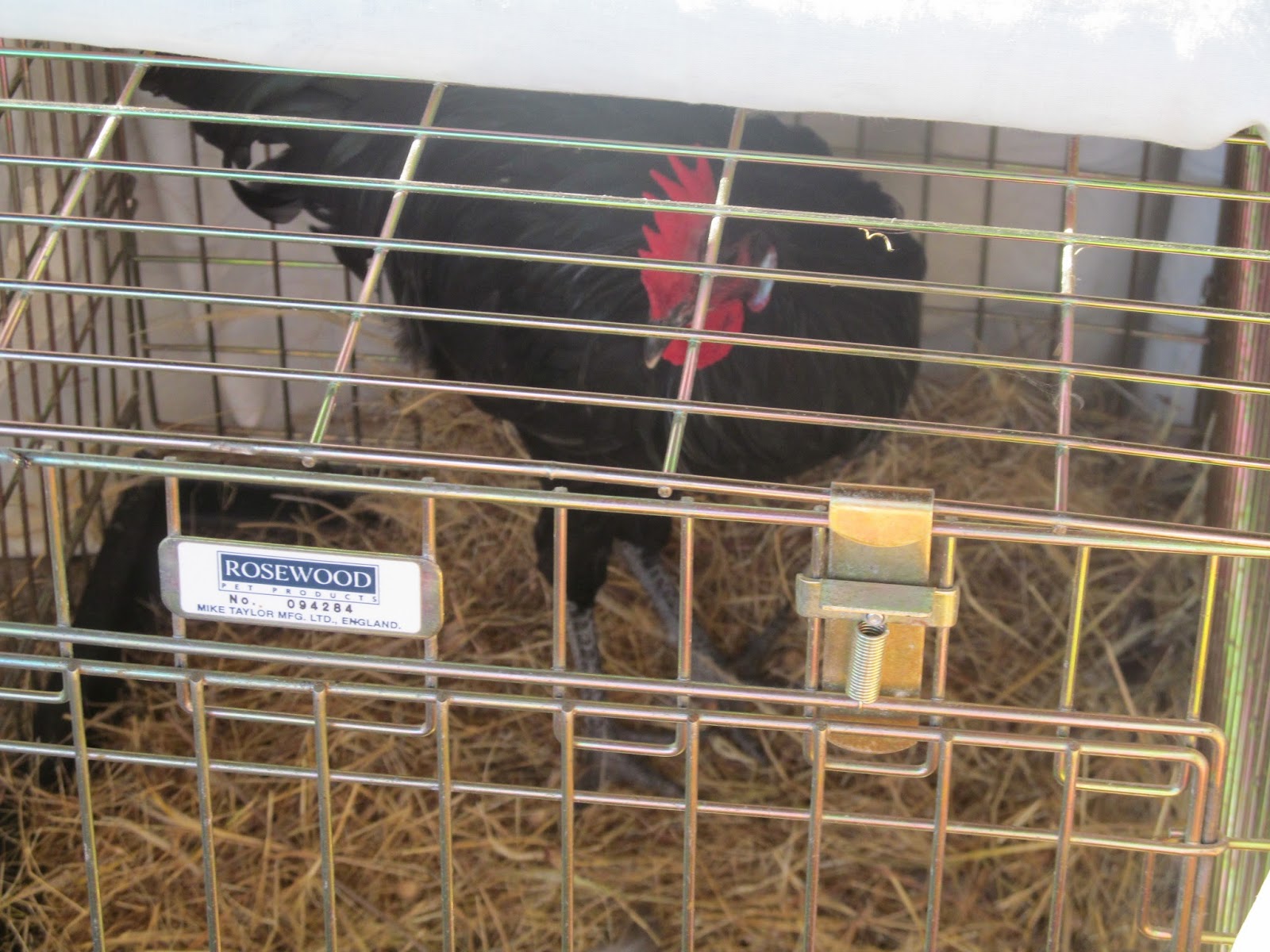 We had already advertised around our friends to find out if anyone wanted him - he is a pure breed and worth saving if at all possible.  The Castilian has been genetically proven to be the origin of every breed of European black chicken.  They are a very ancient breed, slight of build, quite flighty and they lay white eggs, not usually quite as big as the more modern breeds.  They are also on the endangered list so those who own some are encouraged to keep the breed pure and try to increase their numbers.  But alas no one seemed to want him.  So I decided that he was for the pot.  I sharpened my knife - really sharp.  I psyched myself up to do it and then Steve said... well we had better just check once again with the only friends that we knew were planning on getting chickens but just hadn't got around to it yet.  We phoned and were told that they would get back to us. 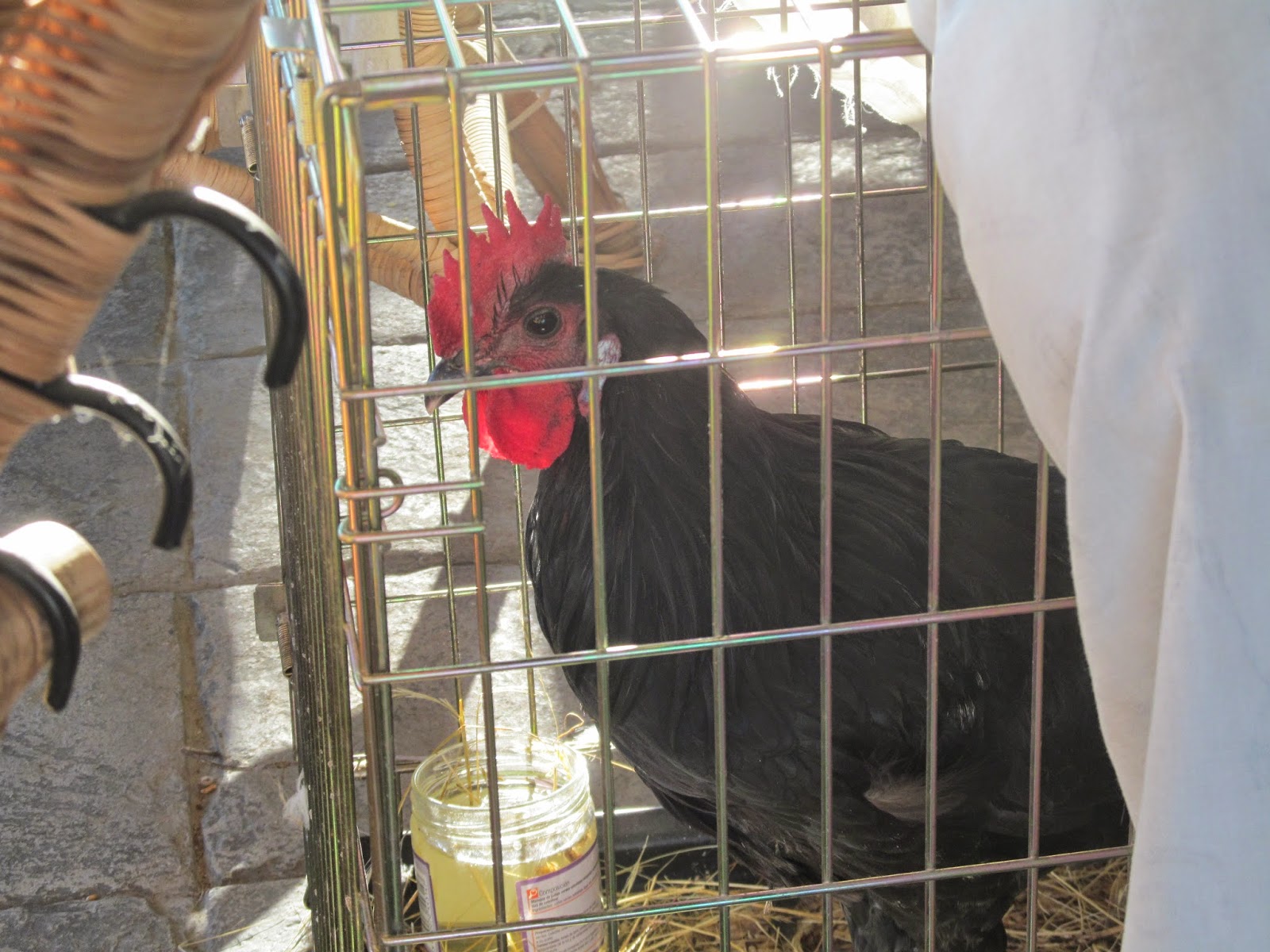 Meanwhile... the cockerel was put into the dog cage (death row) and given water and food.  We waited.  No phone call.  What to do?  If there is even a tiny chance of finding a new home for him I would rather that than eating him - he isn't really very large and would probably only make soup.  The day dragged on.  I hated having him in the cage but felt that we couldn't let him out in case he was attacked by Raul.  Anyway when I opened the cage to put more food in he made a dash for it and suddenly in a flurry of feathers and clucking... 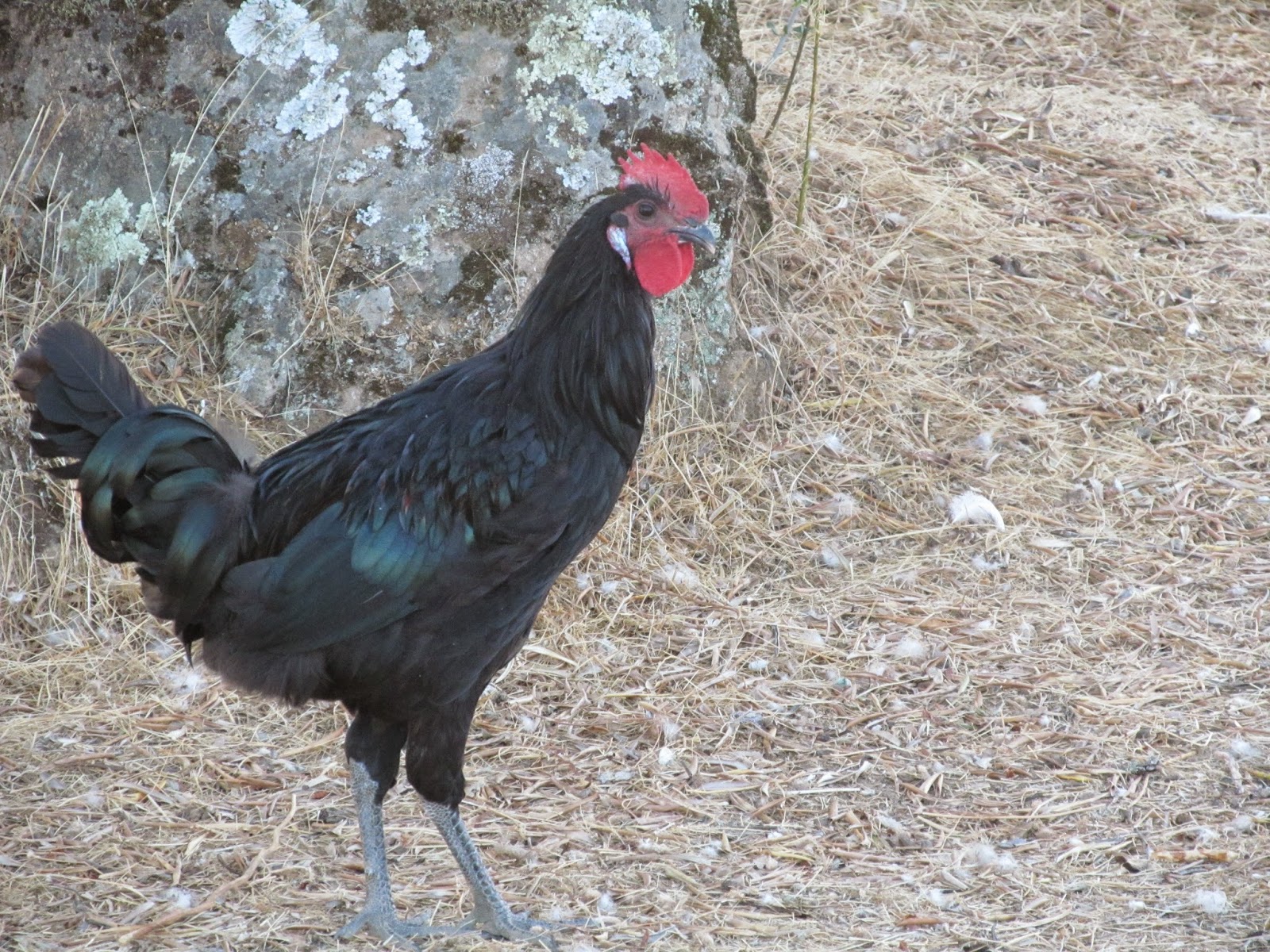 Boy can he run - and fly!  We didn't stand a chance of catching him.  So we let him be and Raul more or less left him be too.  That was a surprise!  The hens chased him off if he came too close but mostly he spent the day pacing the fence where his siblings were. 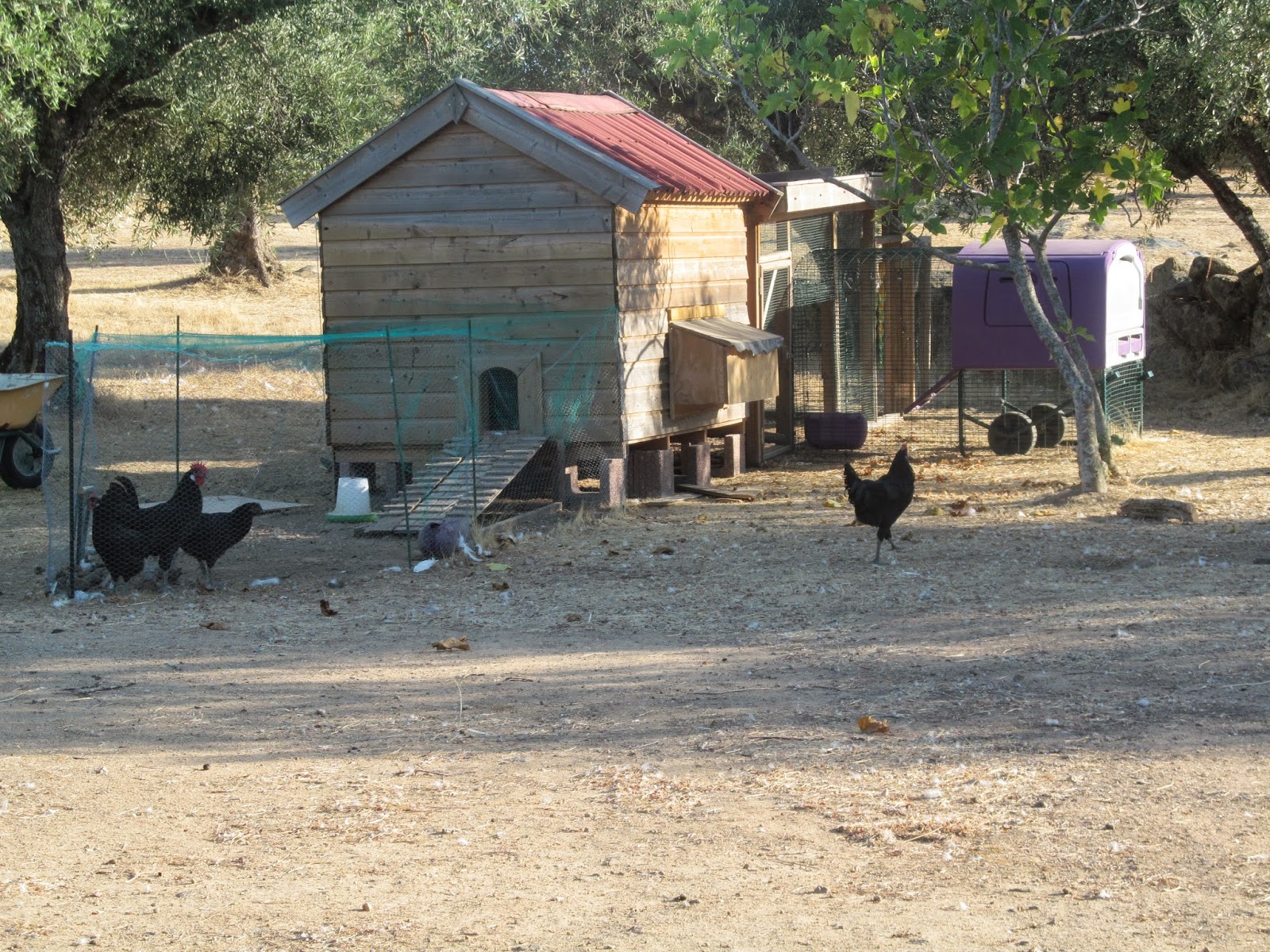 In the evening we enticed him back into the run with his siblings to see if fighting would recommence and so far so good.  The ceasefire is holding.   But clearly something has to give and soon too.  Now I keep telling myself that the chicken killing day is coming...... and I want it to come.  It is a milestone that must be passed.  A farmer wouldn't have thought twice about it.  There are always too many cockerels and you can't keep them all.... but for the moment he has a temporary reprieve.  How temporary we shall have to see. 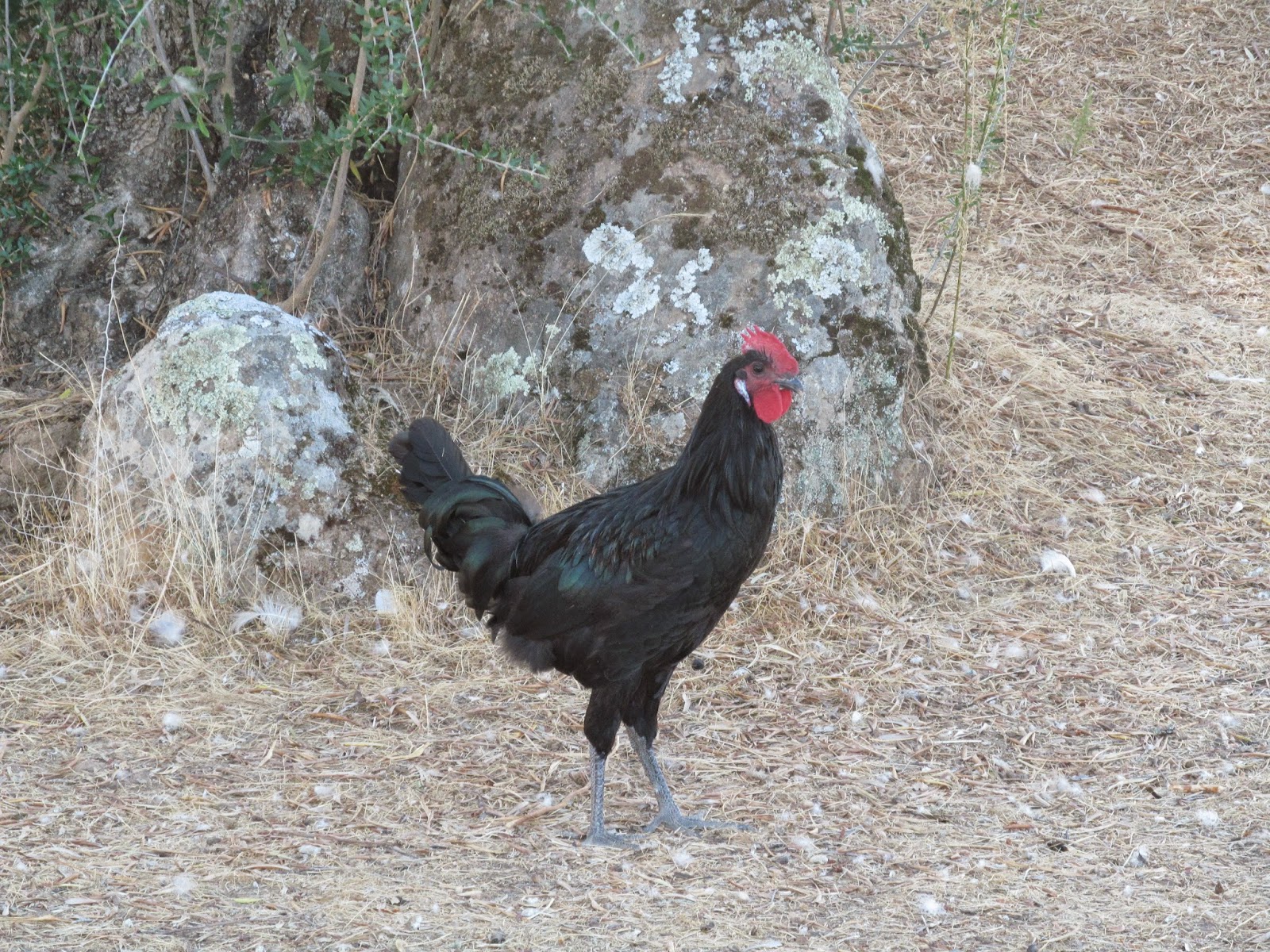 Chickens Farming life the universe and all that Spain