The Trouble with Sunshine is...

- June 15, 2014
...it is too blasted hot!  On my allotments in the UK I had a lot less sunshine and a major problem growing some things due to  the damp and wet, tomatoes and potatoes with blight (year after year), the voracious slugs and on one allotment... deer jumping the fence to nibble the lettuce.  The weeds grew rampant and you had to really keep on top of them or your veggies would be swamped in a matter of days.  I used to dream of a perfect summer, more sunshine for sure.  'What couldn't I grow if we just had more sunshine?' 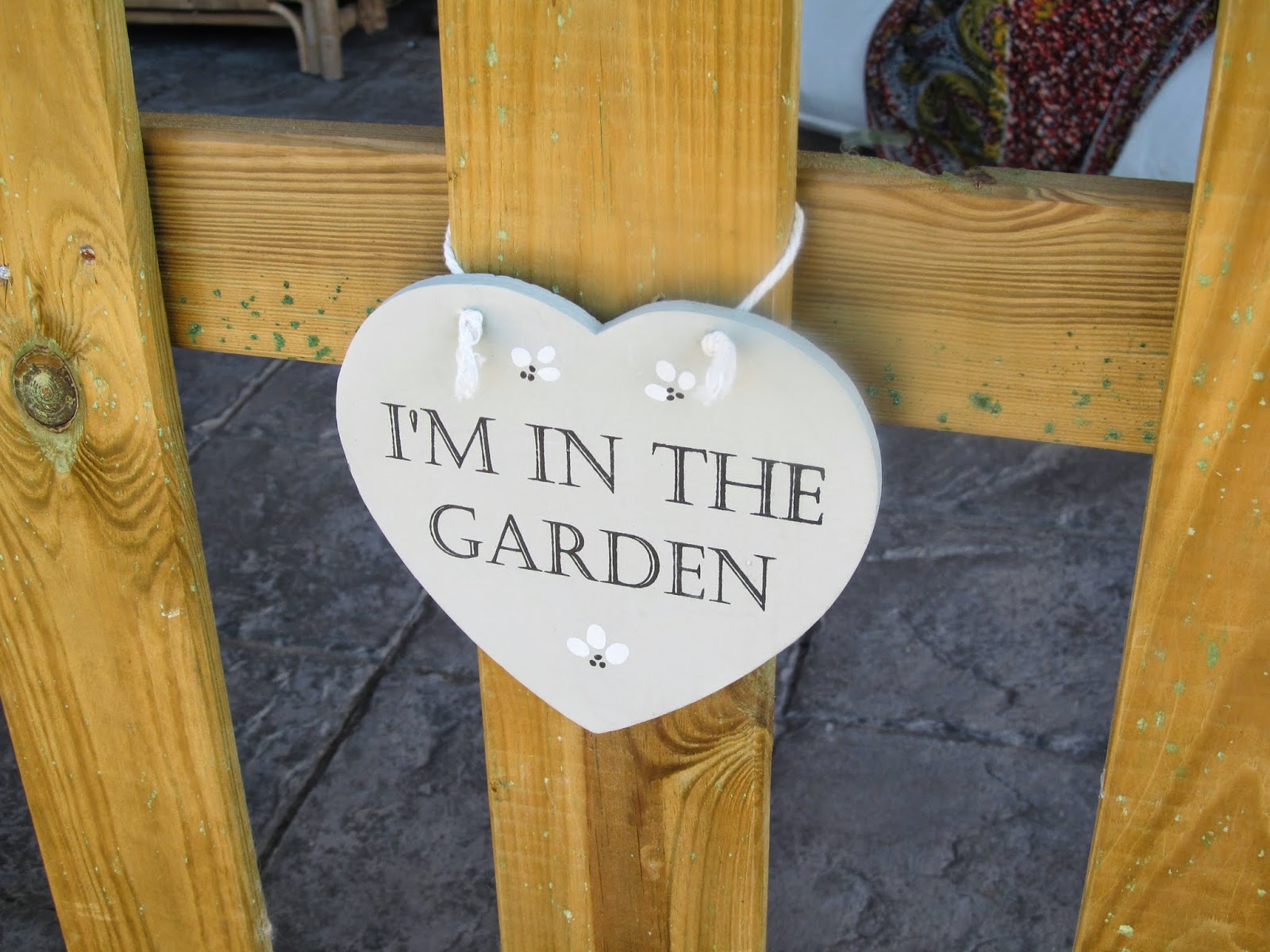 Well I got what I wished for... but of course its not all plain sailing.  I have simply swapped one set of niggles for another.  We have very sandy soil that doesn't seem to hold any moisture at all but luckily the weeds do not take hold so fast, those that do have shallow roots and pull out very easily. 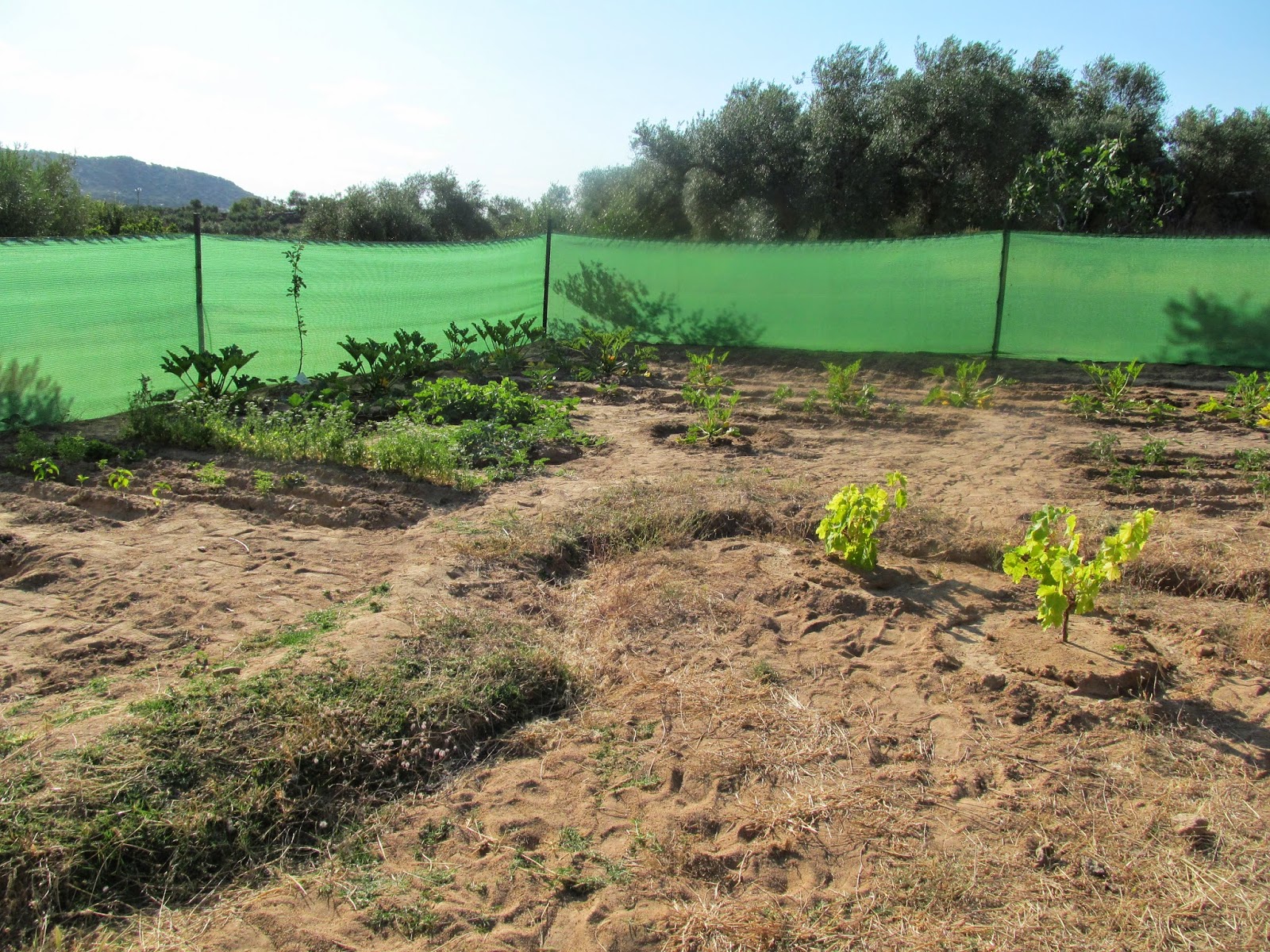 The soil needs improving and that is going to take me a few years of adding compost, there is no quick fix for this... just continuing to add nutrients at every opportunity, we already put all the goose water (stinky poo water) on to the veggie patch as well as the small amount of compost that I was able to make last year.  We were late planting almost everything because we waited for our Volunteers to clear the ground.  So we missed the spring rains - quite a serious error there. 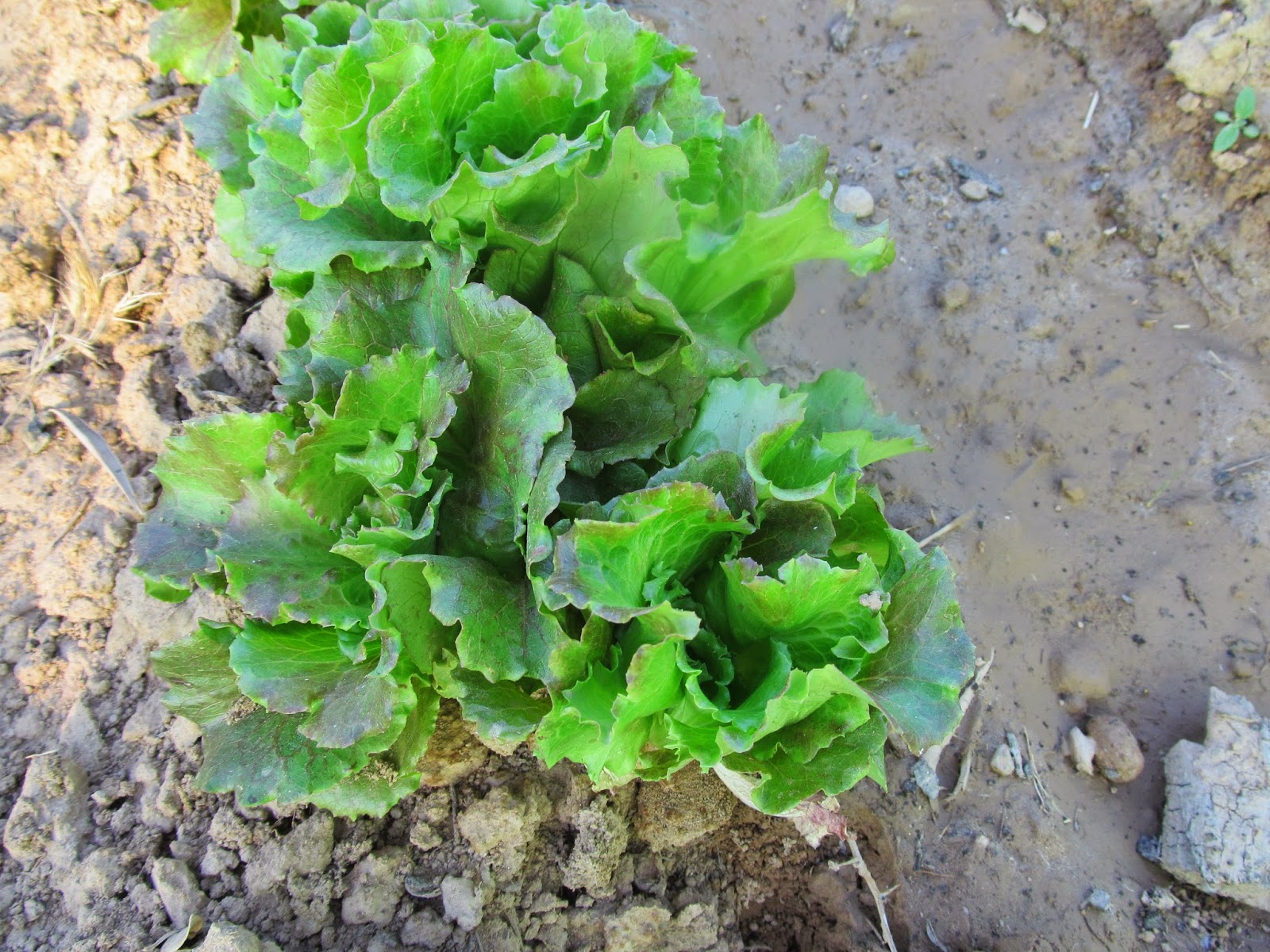 Having finally got things under way I expected very quick growth.  I guess if it had rained more we might have seen a better start.  I still think I am not watering enough but I simply don't have the time to water any more.  It takes us an hour plus to do the watering in the evening.  A new irrigation system is on the drawing board but might not be operational until later in the year. 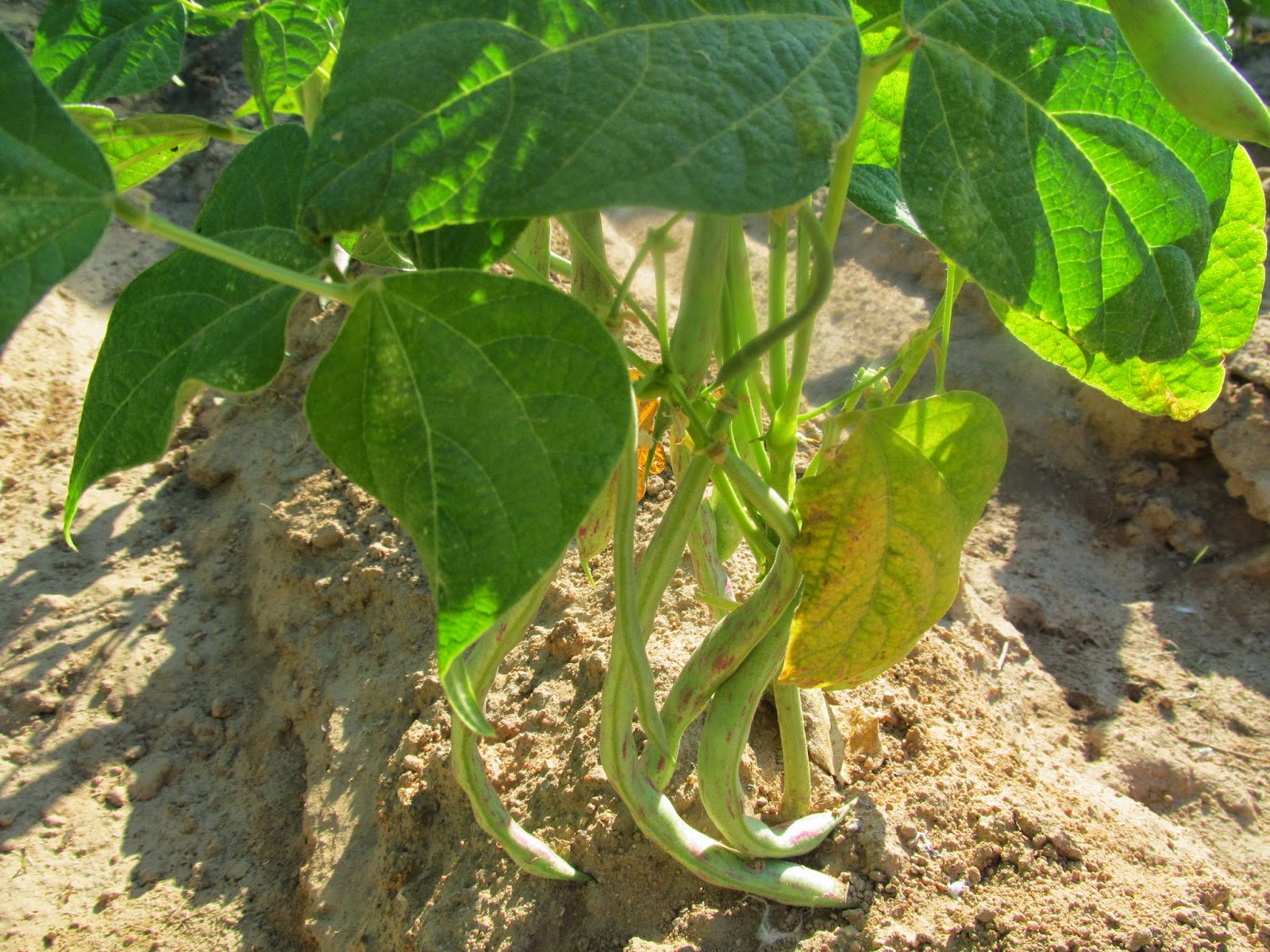 I planted a variety of bean specifically for drying but out of about 30 beans, only three or four grew. 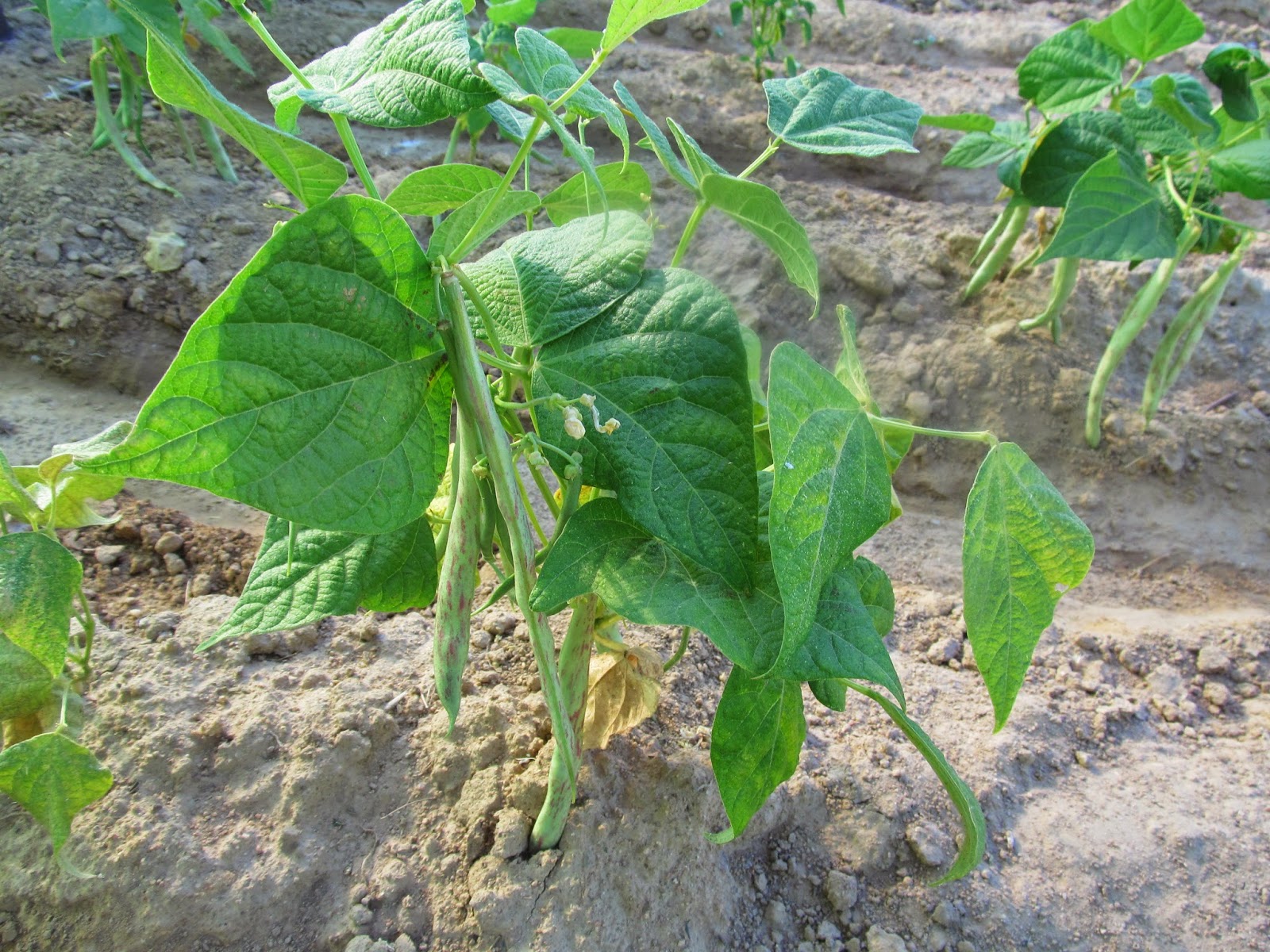 The second lot I soaked first and planted another 20, out of which, again... only a few grew.  I am stumped on this one.  These beans are a Spanish make and bought here this year so one would assume they should be good.  The chap down the road has a lovely patch of big bushy bean plants and I am very envious - but then he sprays his finca with all sorts of concoctions which is something we would like to avoid.  He could have bought plug plants - I have noticed that the plug plants grow better than the seeds I have planted myself.  Ho hum. 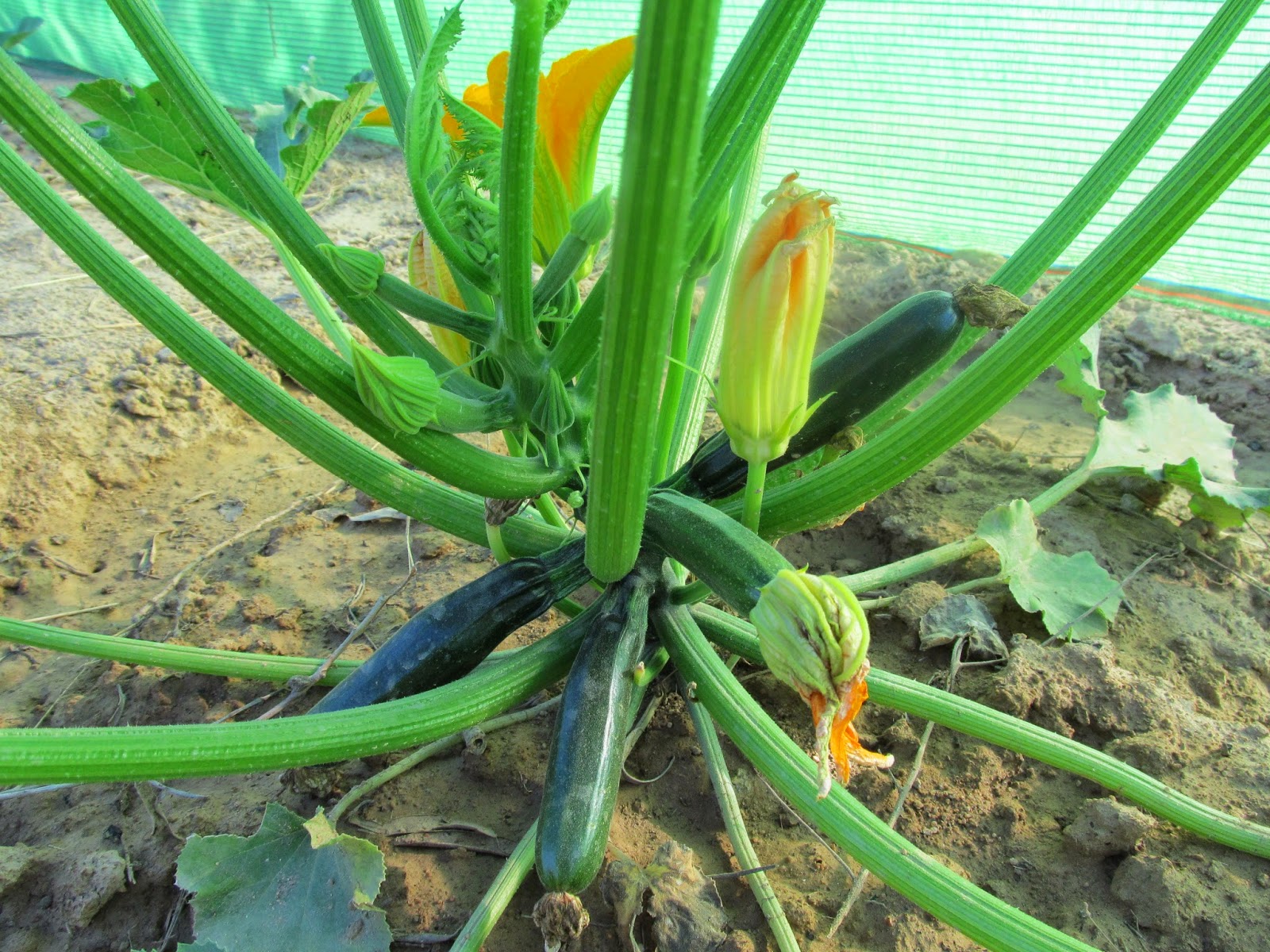 And then there are ants. Loads of them.  All sorts of varieties, big, little, black and red.  It would be foolish to think I wouldn't have an issue on the veggie patch.  The local remedy is to spray.  And to spray again and again regularly... not an organic eco friendly spray either... they invariably go for the most lethal stuff, and sadly, here in Spain you can still buy some pesticides that are banned throughout the rest of Europe.  We don't want to do it that way. 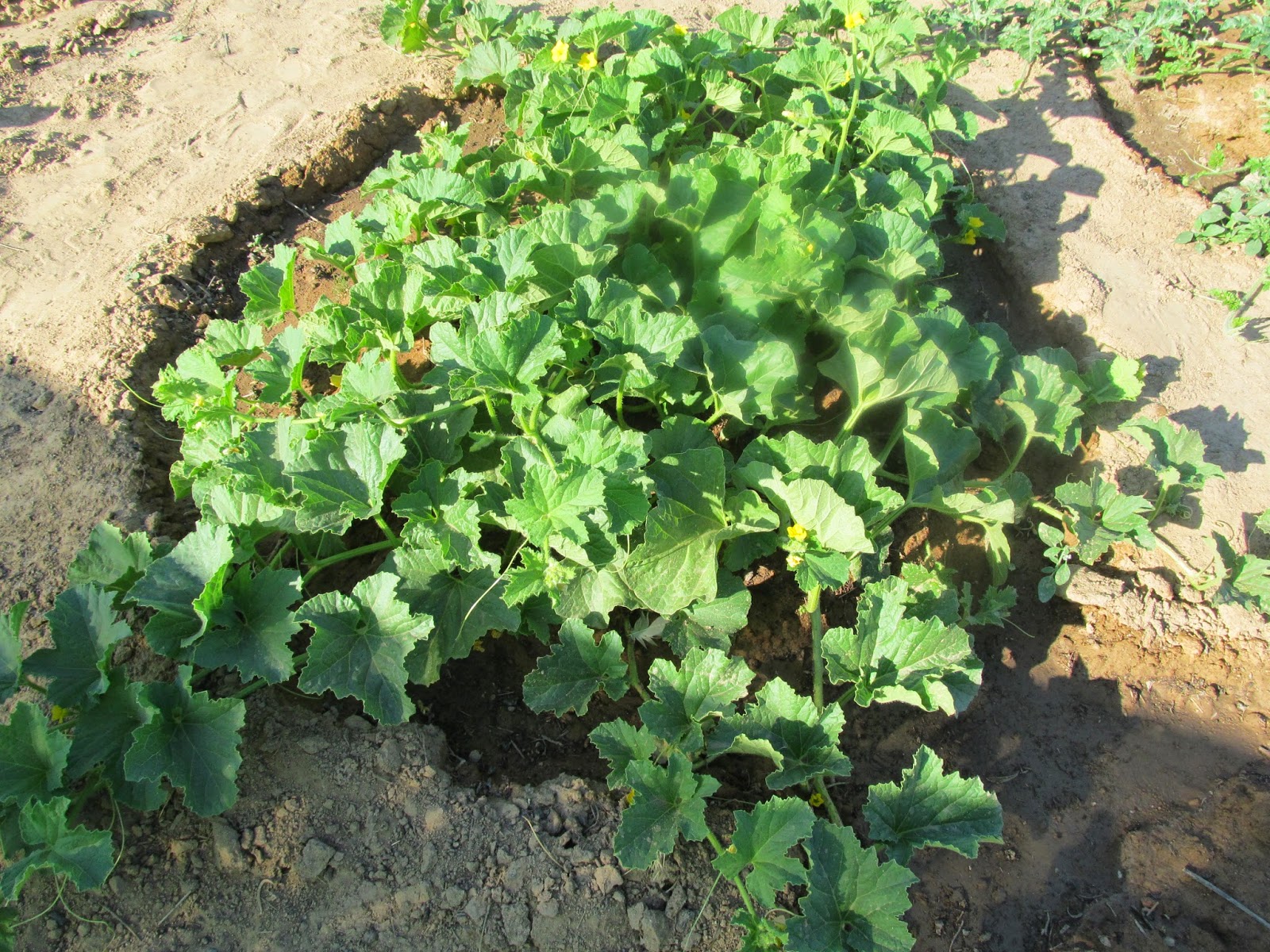 I looked up the most eco friendly options for dealing with the ants... hot water, lots of it - works only for a day or two and then the ants are back.  Lemon or Orange peel - doesn't work at all. Breaking into the nest - doesn't work at all, just makes them mad.  So... now what?  Luckily they don't seem to be eating the veg... just sucking on the nectar in the plants.  But it does make for difficulties in harvesting... hard to do while you are jumping up and down trying to get the ants off your legs! 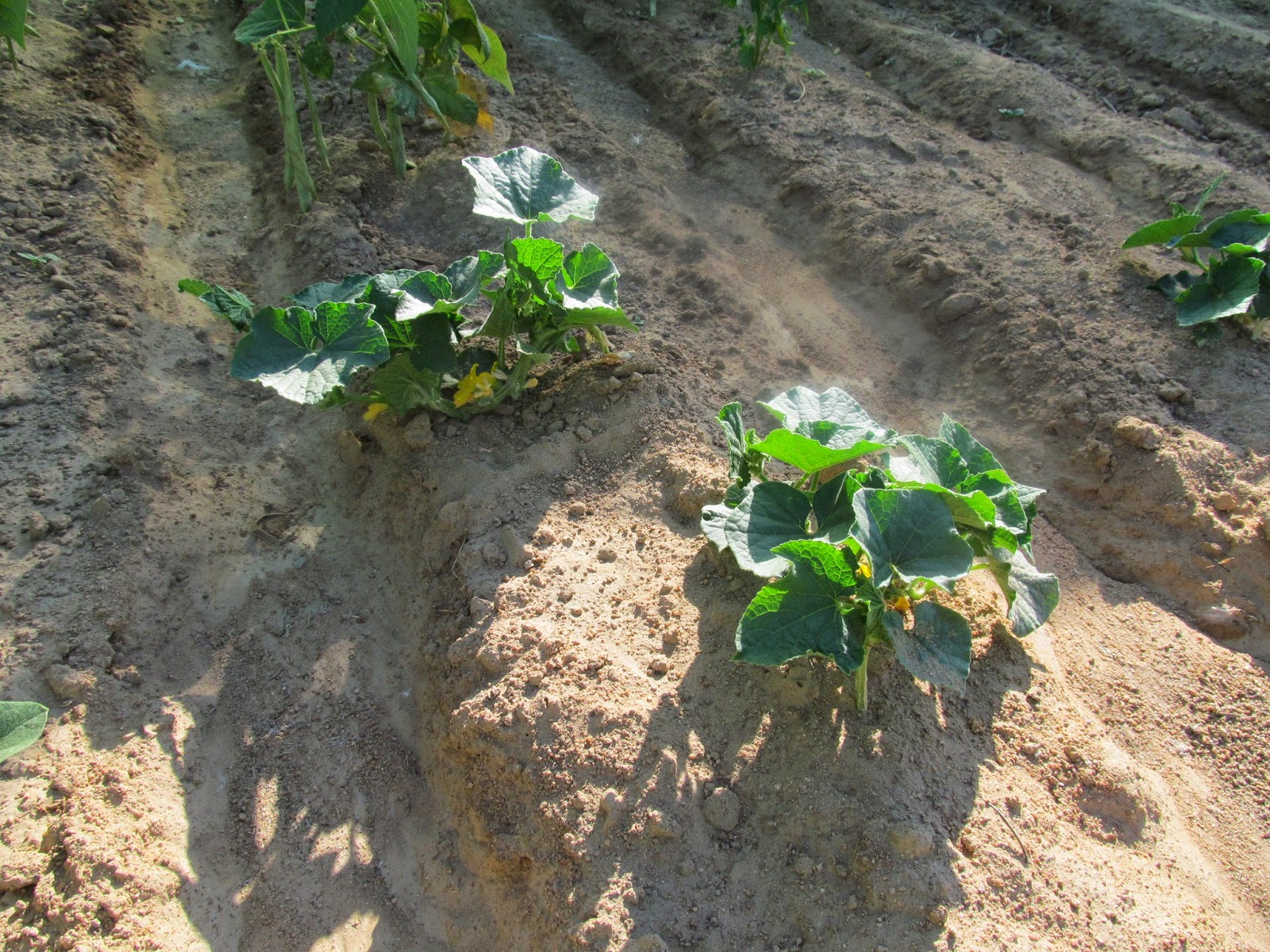 I did remove the black fly from the beans which helped rid them of ants.  I used soap and water and some rubber gloves and spent three days repeating the cleaning process plant by plant.  If I had more beans it would not have been possible.  But it worked.  The ants on the beans were after the aphids, on the rest of the plants they seem to be after the nectar in the flowers and obviously I can't remove the flowers. 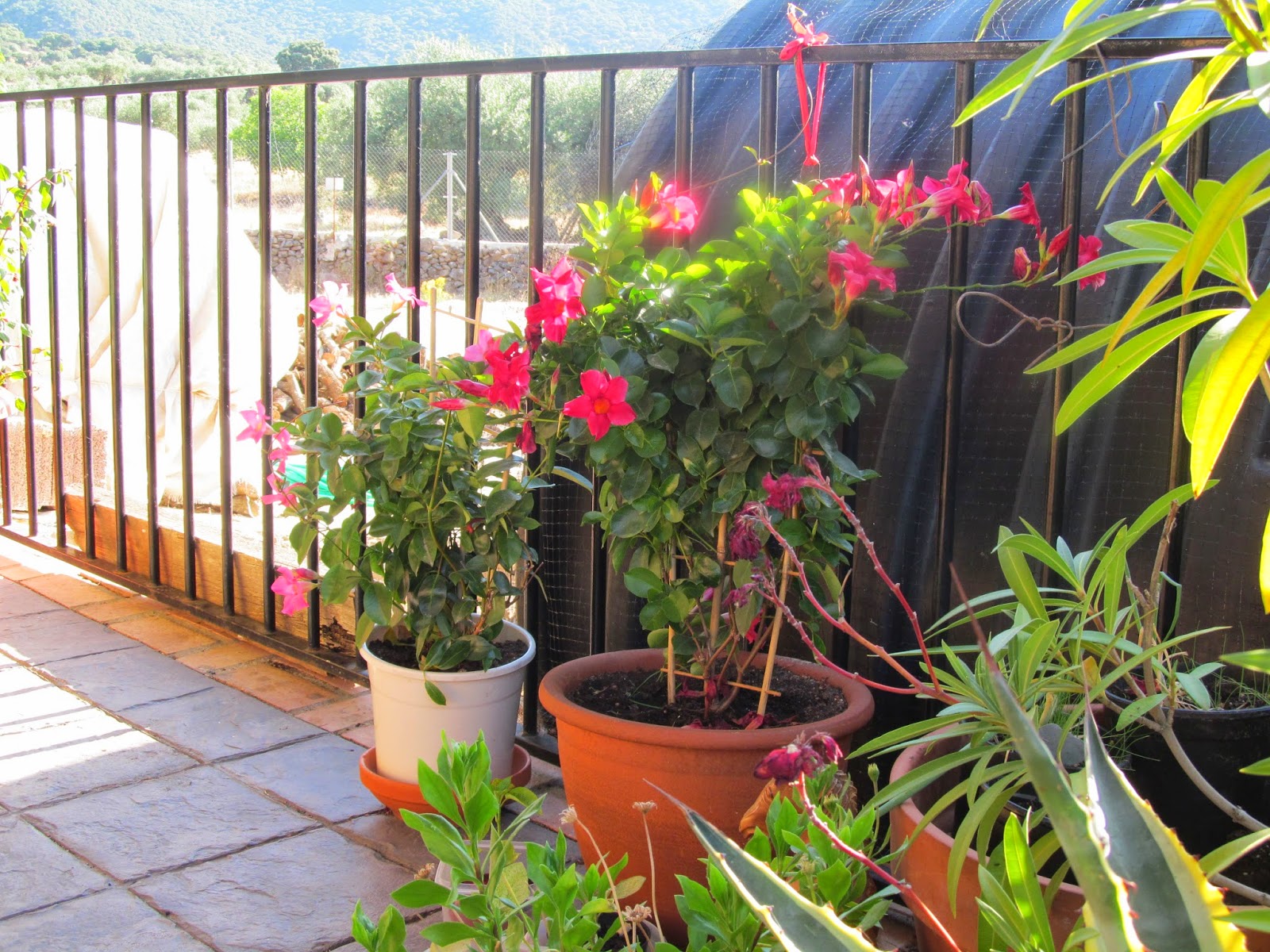 On a positive note... we are harvesting courgettes not quite as prolific as we used to in the UK but they are only just getting started.  You can have too much of a good thing as I remember. 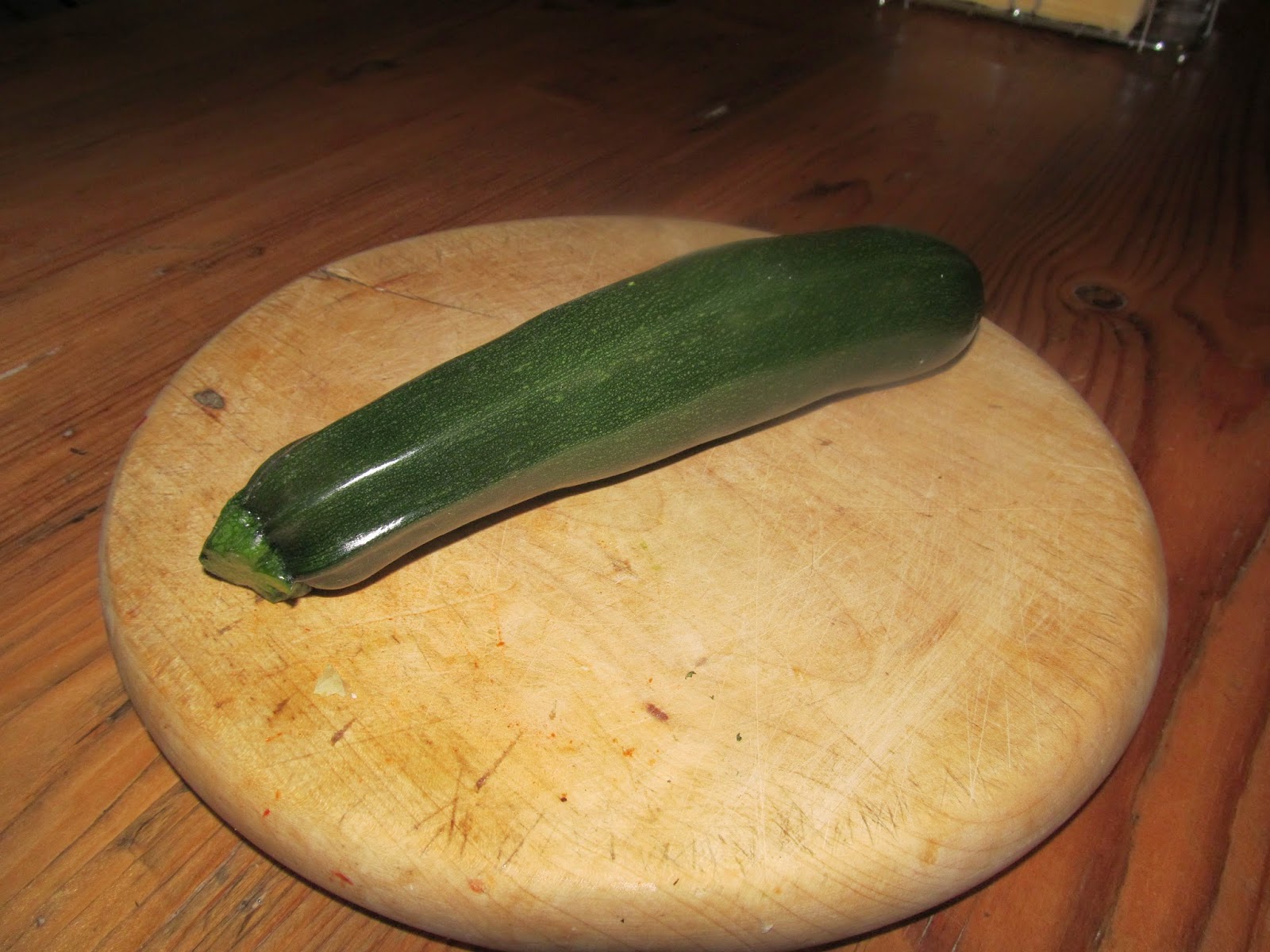 We have our first baby tomatoes starting to swell and the coriander has been delicious, we are letting it go to seed now.  We also have basil starting to come up strong, I've never grown that successfully before.  The melons are doing well so far... just finished flowering and we are very hopeful... they are also a new adventure in veggie growing for us. 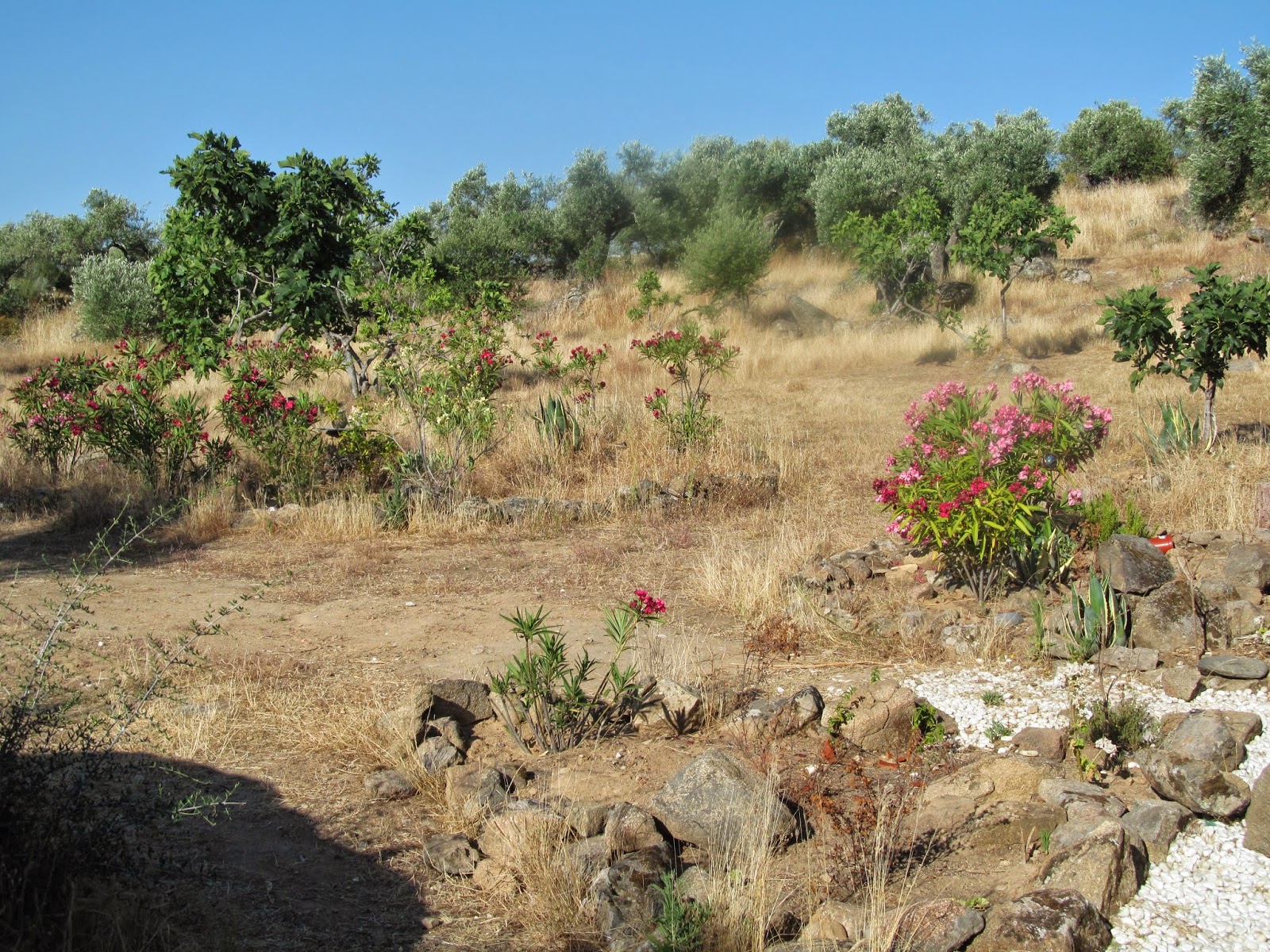 The garden area around the house is showing a bit of colour but tends to just merge into the general dryness of the surrounding finca.  We are hoping to fence in the garden and then pack it with shade giving fruit and nut trees and try to get more flowers to grow underneath.  It's gong to take some time. 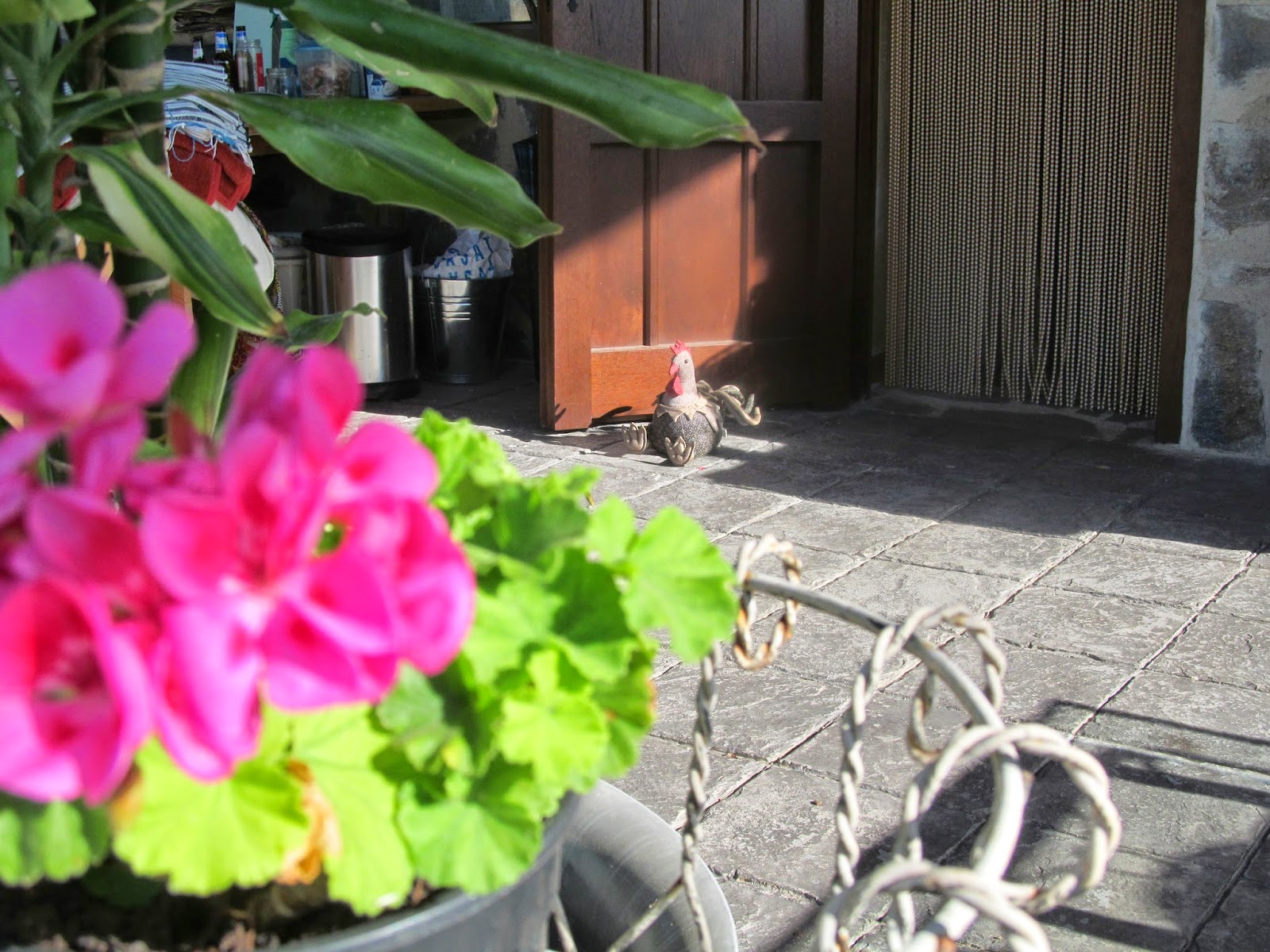 On reflection I guess it isn't too bad considering it is our first year and we are still very much feeling our way.  Perhaps I am too impatient, it is, after all, supposed to be 'work in progress' for years and years and years.  We will hopefully have plenty of time to sort out all our gardening issues but any suggestions for dealing with the ants right now would be more than welcome.
Chit Chat Farming Gardening Spain Weather