- April 07, 2014
I am taking being Mother Goose very seriously.  Well you have to.  When a living creature is dependent upon you... it's a big responsibility. 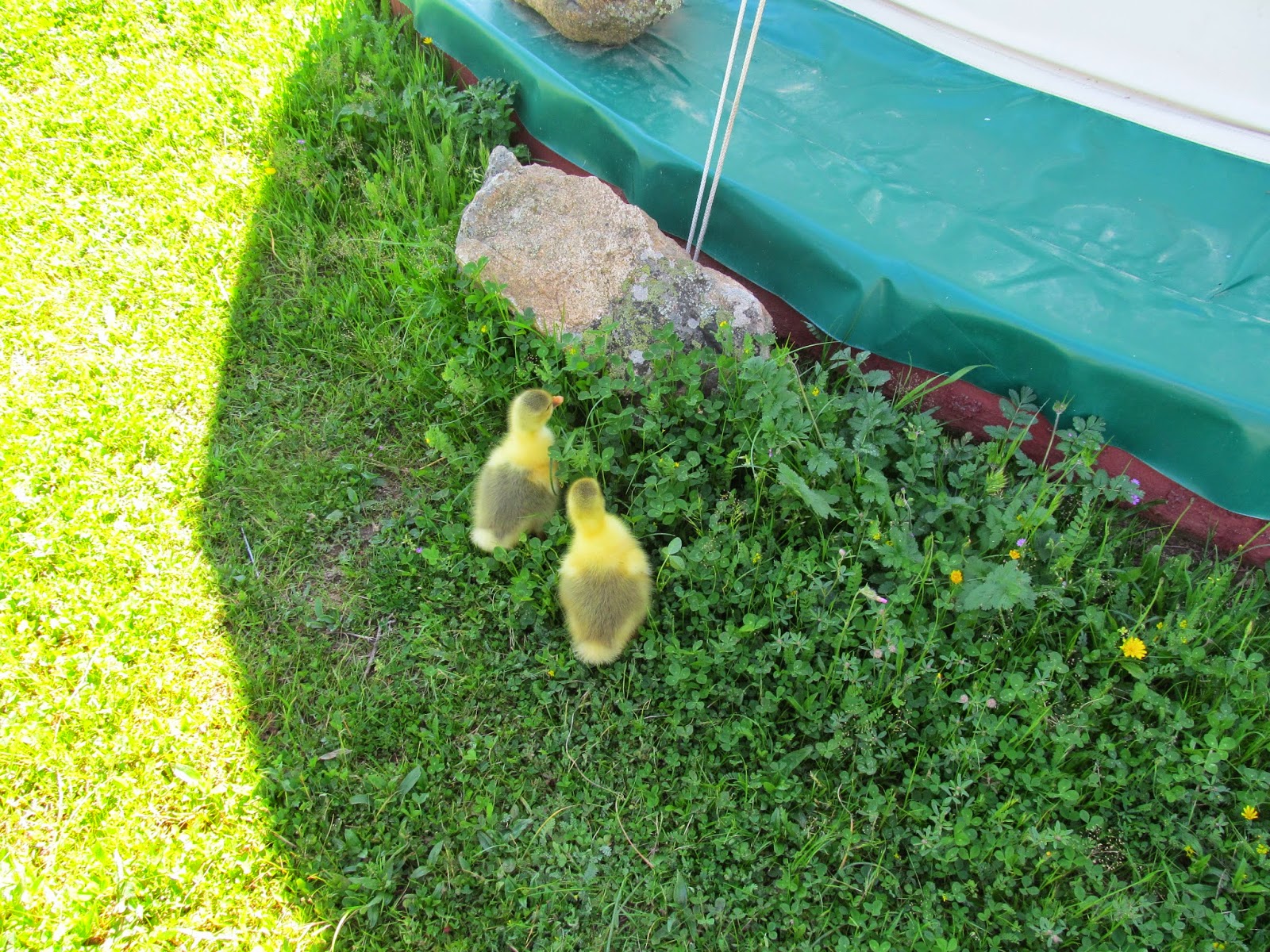 I have heard a lot of people saying that raising geese is tricky.  Well... we have read quite a lot of stuff that we have already contradicted, not deliberately, its just we were given the two goslings with no notice at all so we have had to improvise  right from the start... and so far they have been relatively easy to manage, but time consuming. 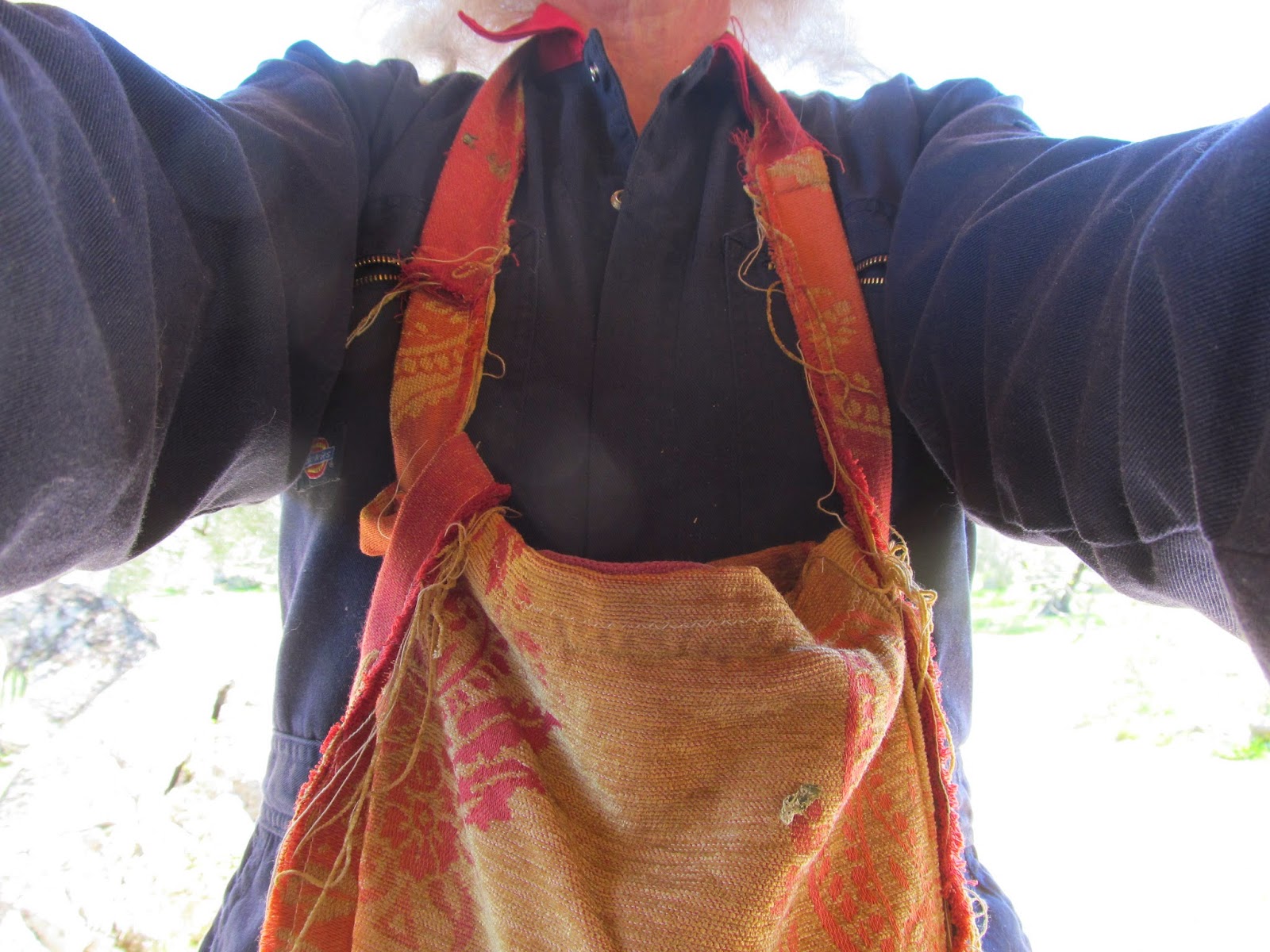 The chicks were less than 24 hours old when we got them and for much of that day I kept them in a bag hanging round my neck. 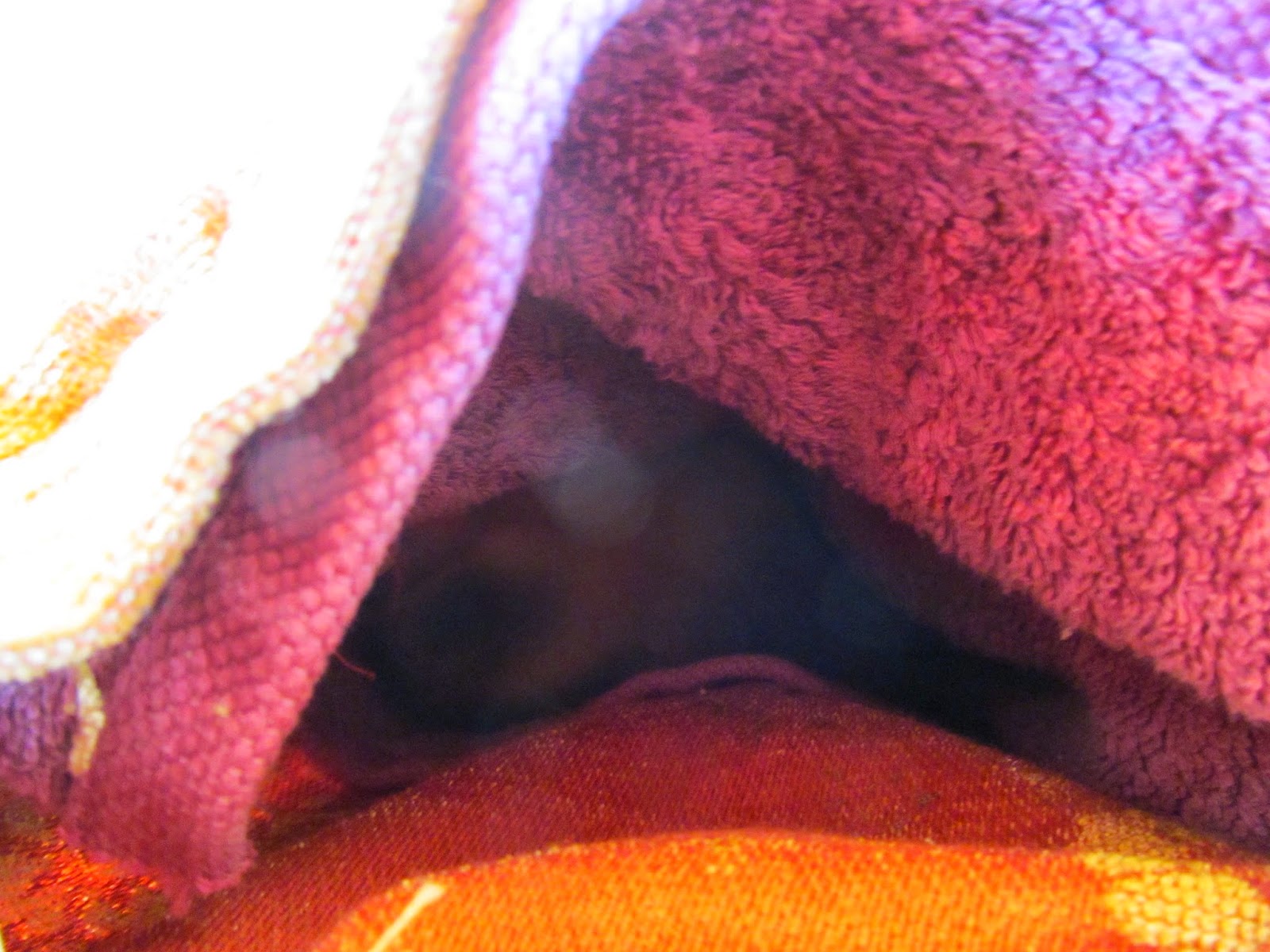 The first night I slept with the bag around my neck for much of the night... I did pop them back into a cat box (still in the bag) for a while during the night but after a couple of hours I woke up and stretching my hand in to check on them I thought they felt cold so I brought them back into bed with me.  The bag complete with goslings inside rested on my chest and I sort of dozed half sat up.  The goslings stayed warm and cosy and made little trilling noises almost constantly. 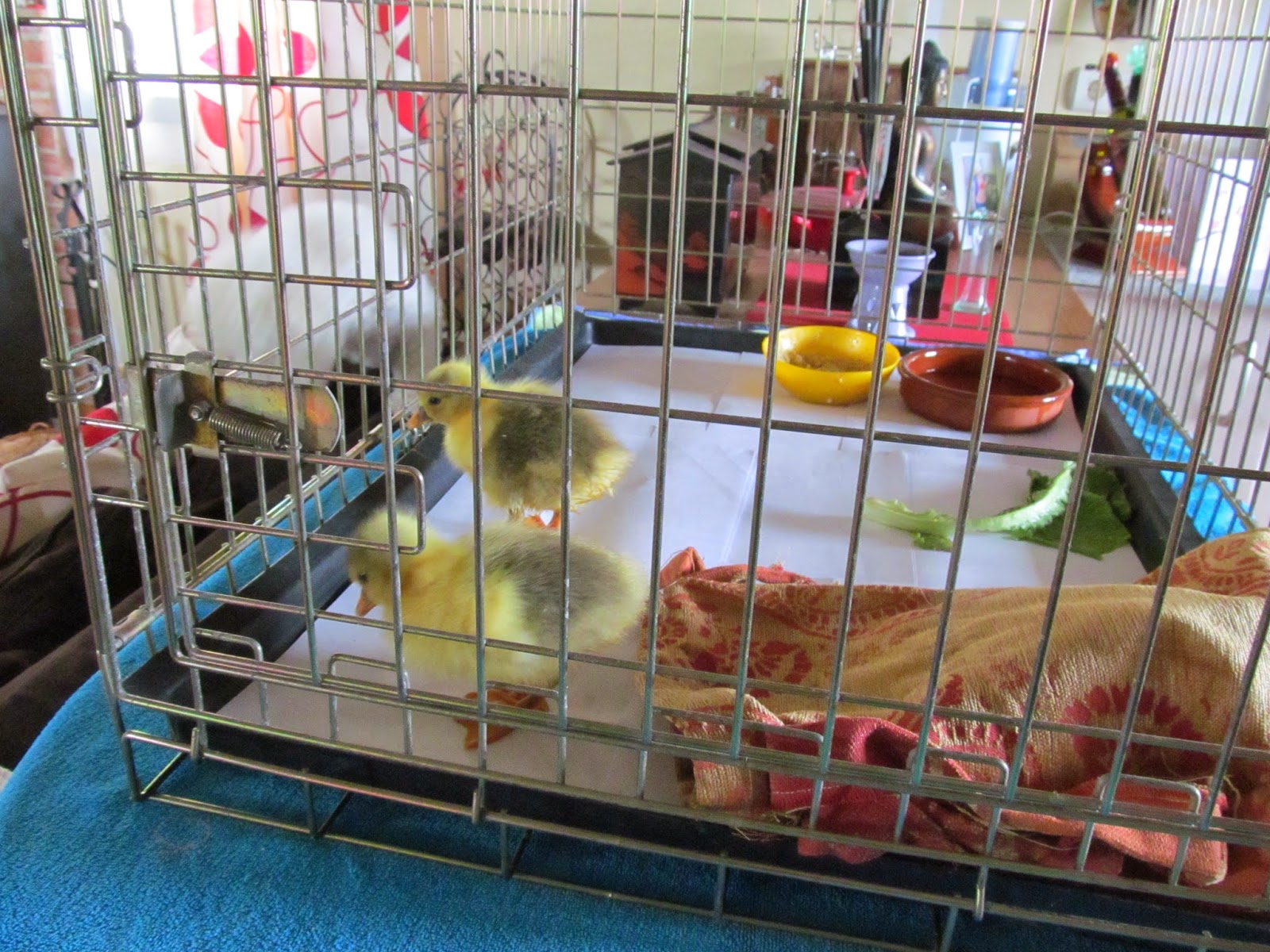 On day two, we put them into a dog cage which we kitted out with some food (chick crumb and some lettuce) and a shallow container of water.  They stayed in the dog cage for most of the day but I did take them out to comfort them if they seemed distressed - loud peeping noises every time I left the room.  And for part of the day they went back into the bag around my neck so that I could get on and do things in the house. 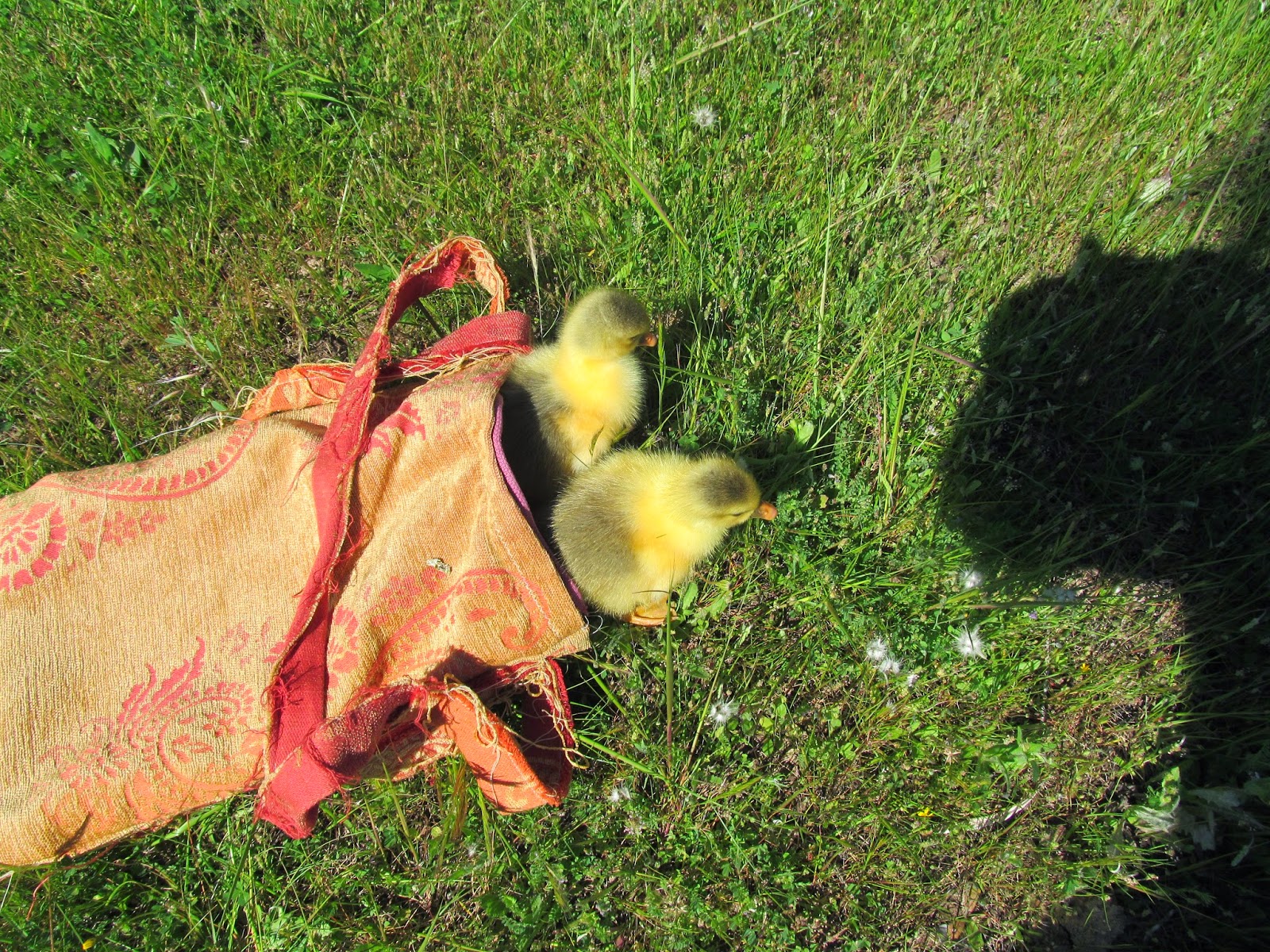 Also on day two they went for their first walk in the garden.  They seemed to enjoy it alot.  But it is a bit nerve wracking for me, there are a lot of things to watch out for.... 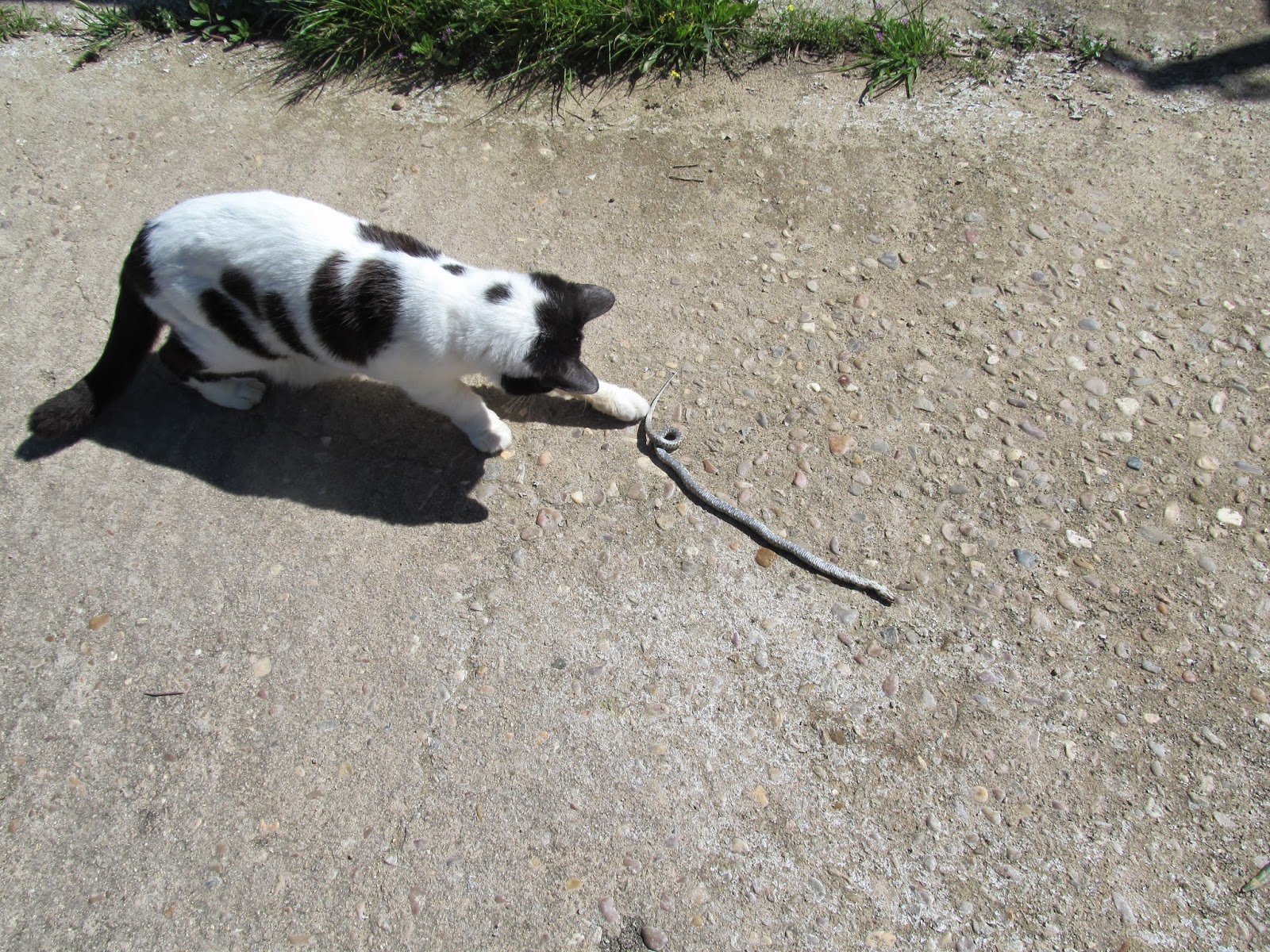 Here Molly the cat is gingerly pawing at a dead snake - not sure what killed the snake but a snake would certainly be a real hazard for a little gosling... not to mention the two cats and the free range chickens and the cockerel. 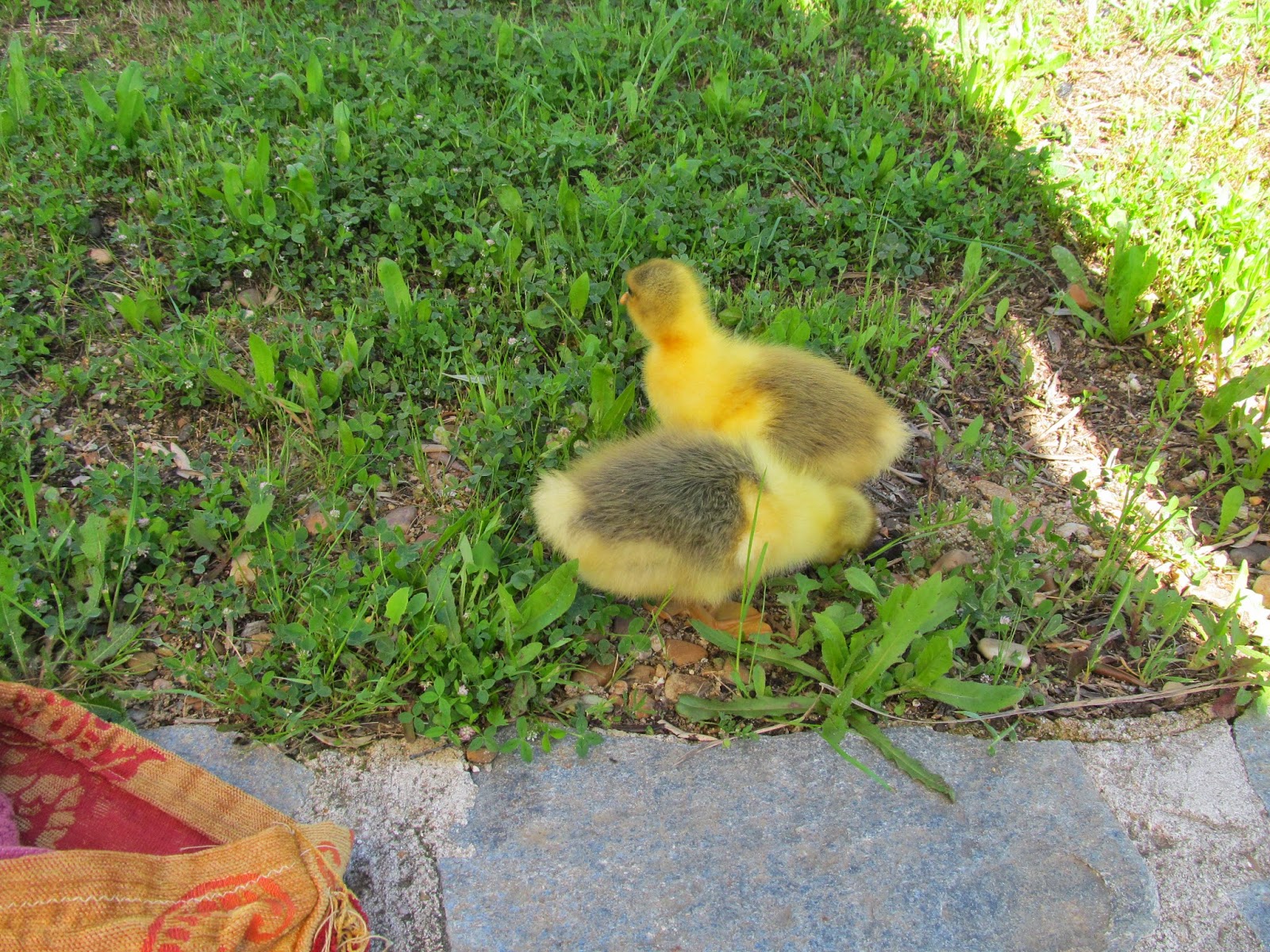 On day three they went swimming in the bird bath.  It said on the internet not to get them wet until they are much much older but apparently mummy Goose brings her goslings down to the water on day two and since it was a nice warm day we thought we would give them the experience.  They floated on the top of the water and were in no hurry to get out.  A good walk around the garden made them very tired and they went to sleep in the bag for a couple of hours after that.

Tomorrow they will be a week old and they have grown so much and it isn't surprising because they never stop eating.  They are quite voracious with the lettuce.  Not so fond of the chick crumb.  They like to stand in their water bowl so I have been in the habit of taking them out for a dunk in the bird bath fairly regularly. 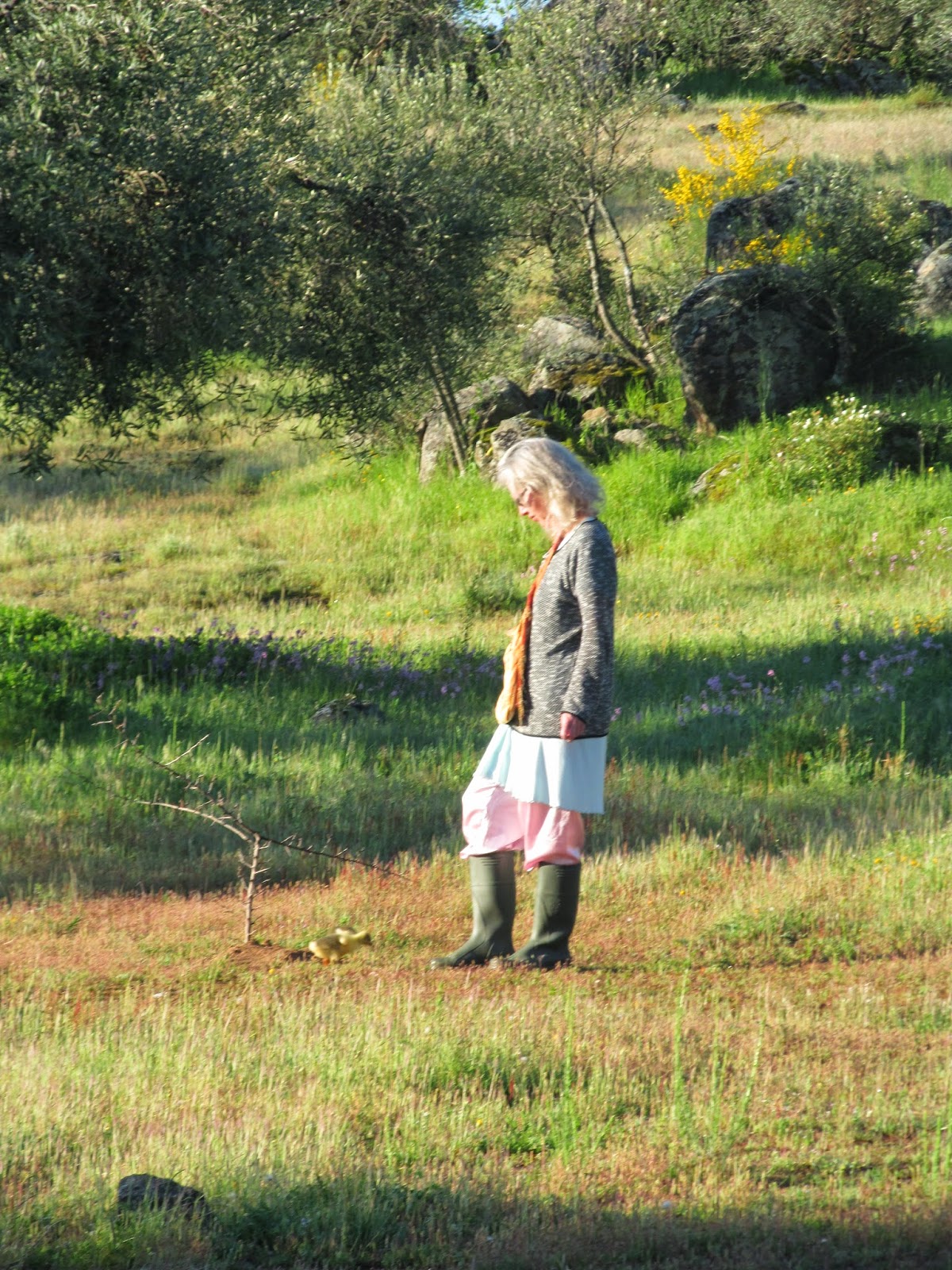 They are hard to get to settle at night though.  They make a terrible racket and insist on being either fed or held and will not settle down to sleep until their cage is covered in a blanket and the house is dark and quiet.  First thing in the morning I don my wellies (still in my pj's mind you) and off out we go for a walk around the finca.  The more grass they eat the better. 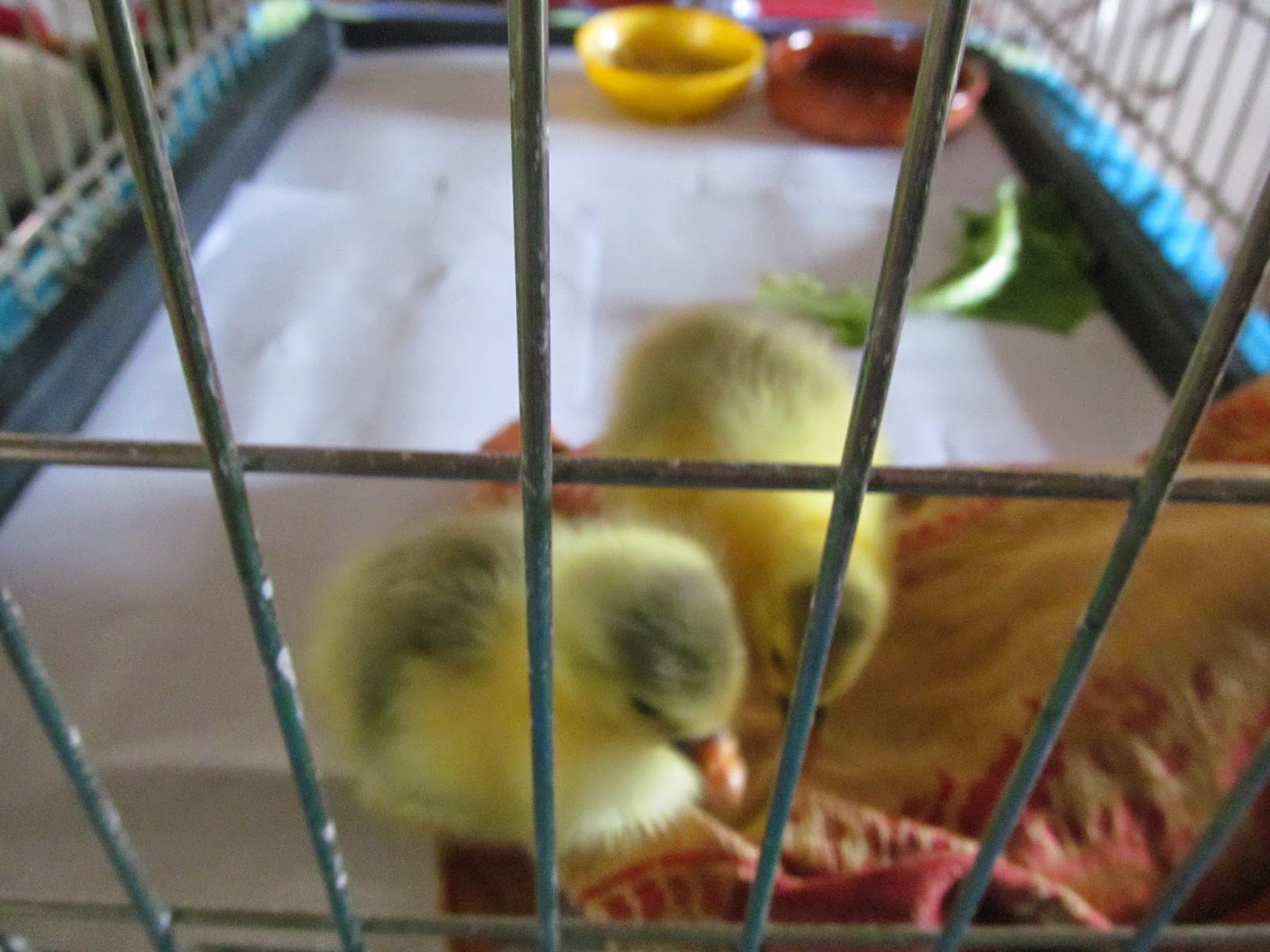 Now, it is hard to believe that geese raised in an incubator and then in a brooder are given the molly coddling that we have given these geese.  I can't wait until we are able to get them outside permanently.  At this rate of growth it shouldn't be too long.  All fingers crossed. 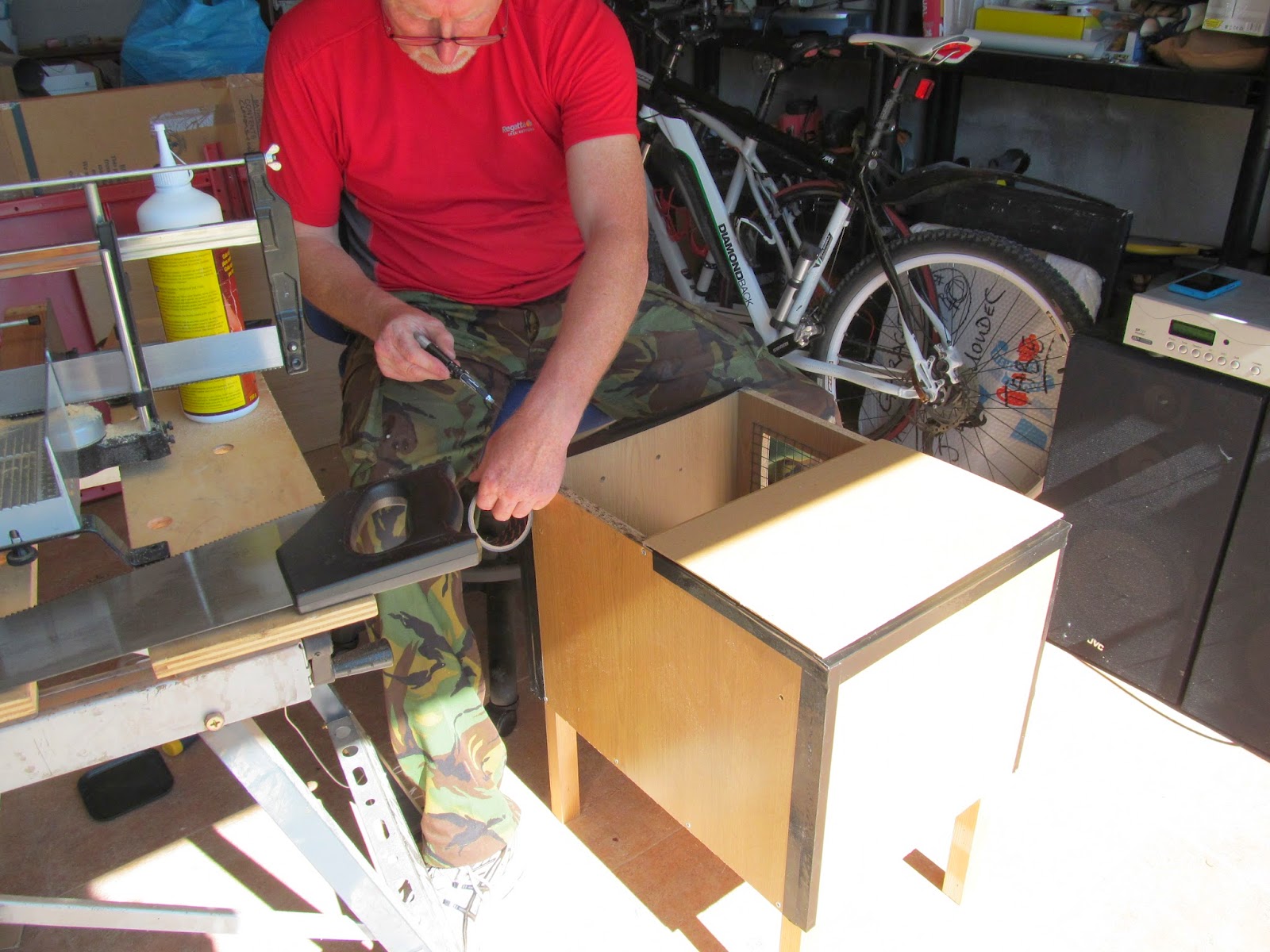 Meanwhile, we have chicken eggs in the incubator that are due to hatch in just over a week.  Chicks are much less hardy and they do need a brooder.  So, using whatever we had to hand Steve has made a brooder and we have borrowed a ceramic heat lamp.  At the moment we are testing it out and it is too hot so a few modifications will have to be made, but that's ok, we have plenty of time to get it right. 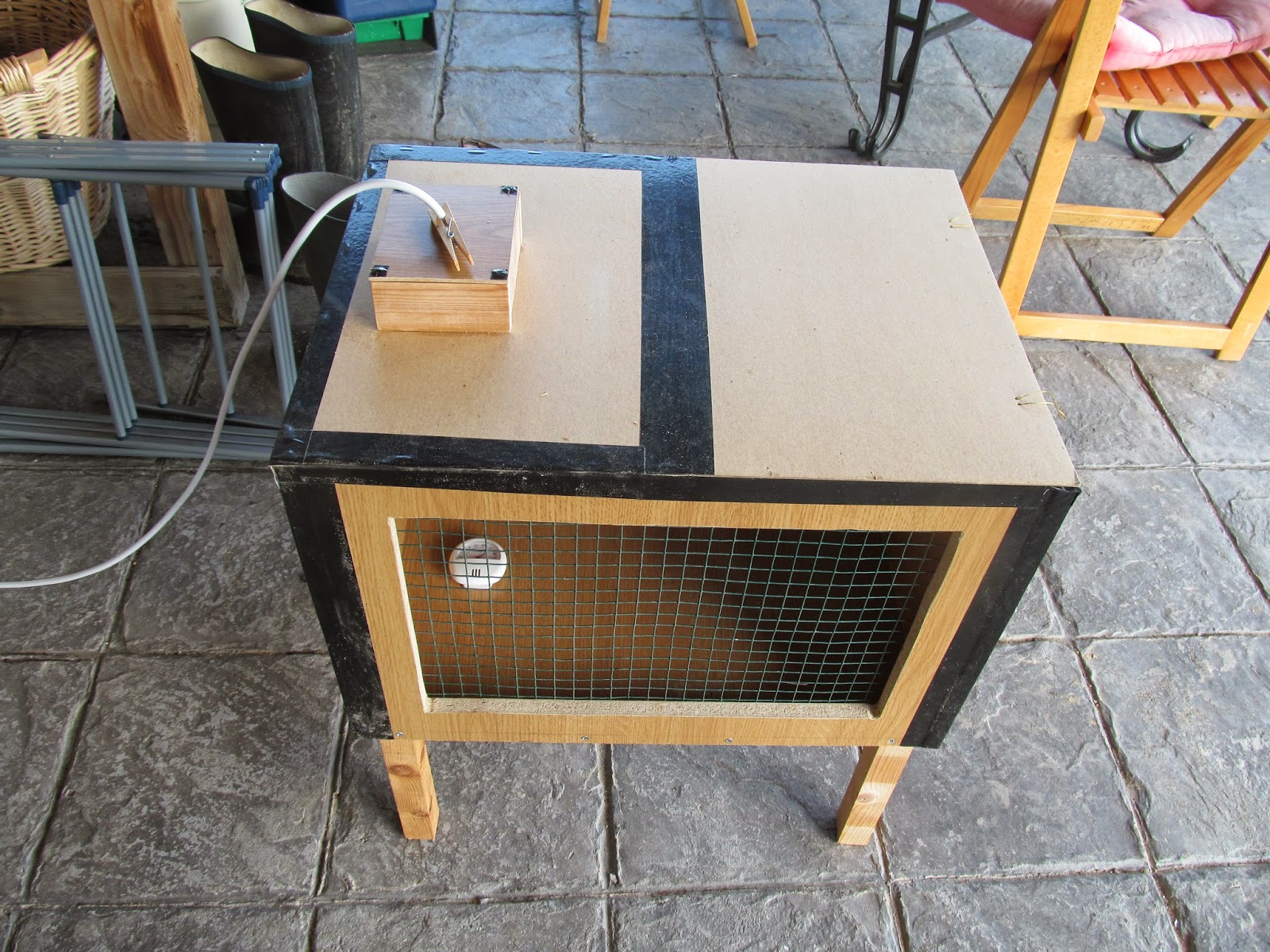 Tonight we are going to move the goslings cage into the bathroom earlier in the evening, its nice and dark in there and hopefully quiet enough for them to settle down so that we can watch some tv.  I am hoping that in future the hens and the geese will sort out their own offspring and we can just stand on the sidelines and go 'ah'. 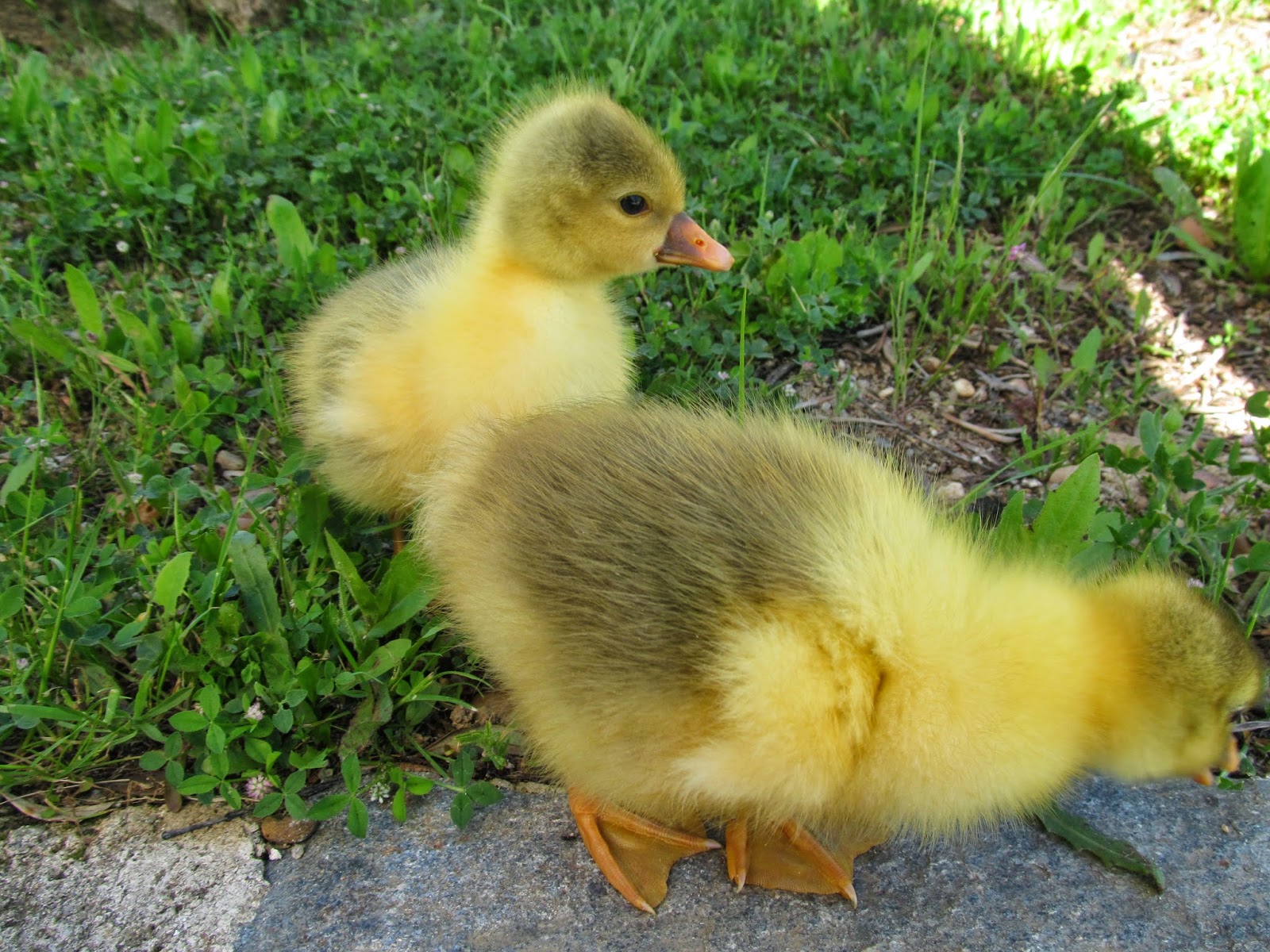 Animals birds Farming Geese Spain What is a Technobilly?