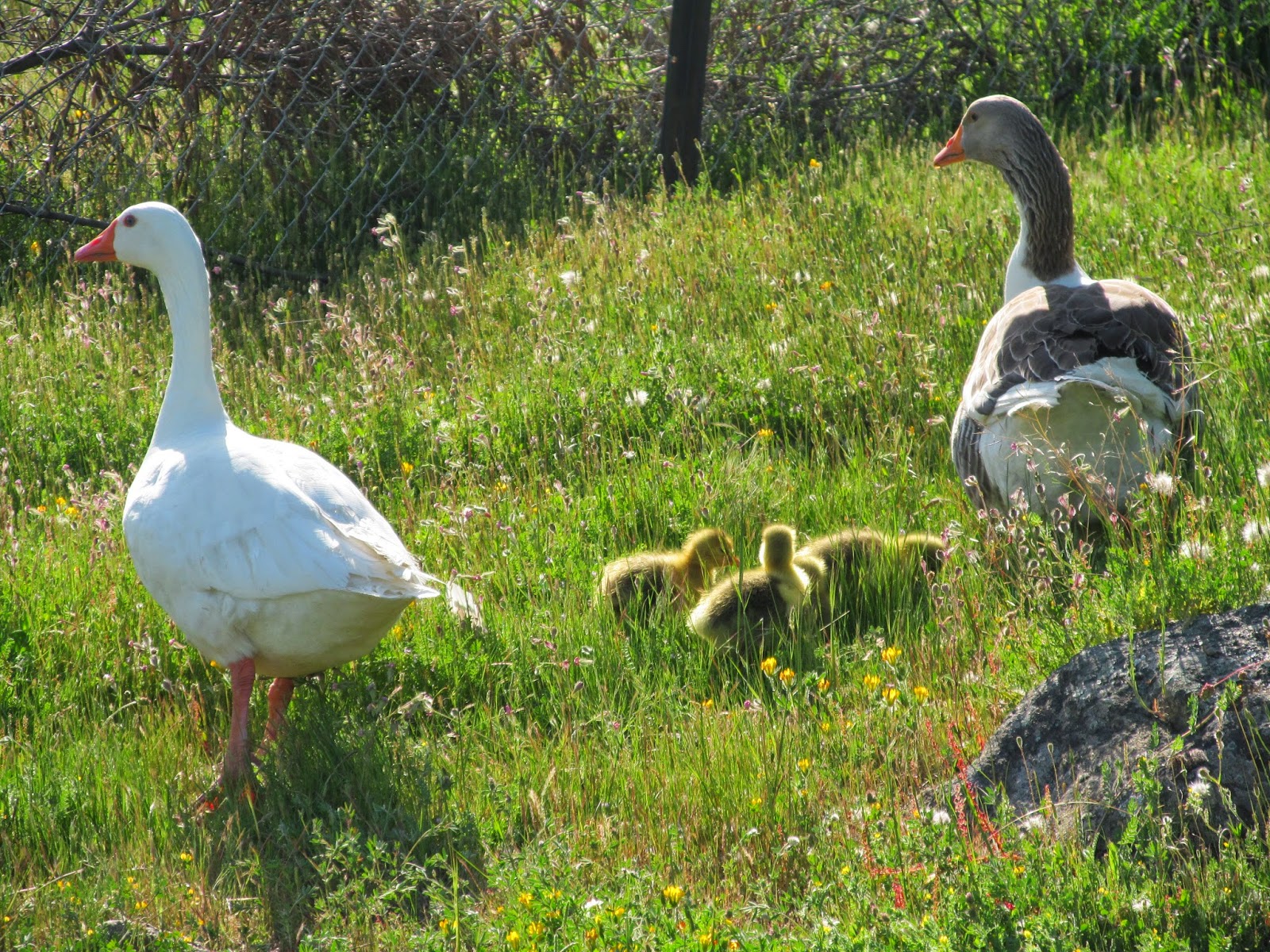 Goslings!!!  At day 30 we knew something was up because the gander positioned himself much closer to the nest and was very very vigilant.  Then we saw two little fuzzy yellow heads poking out from under her wing. 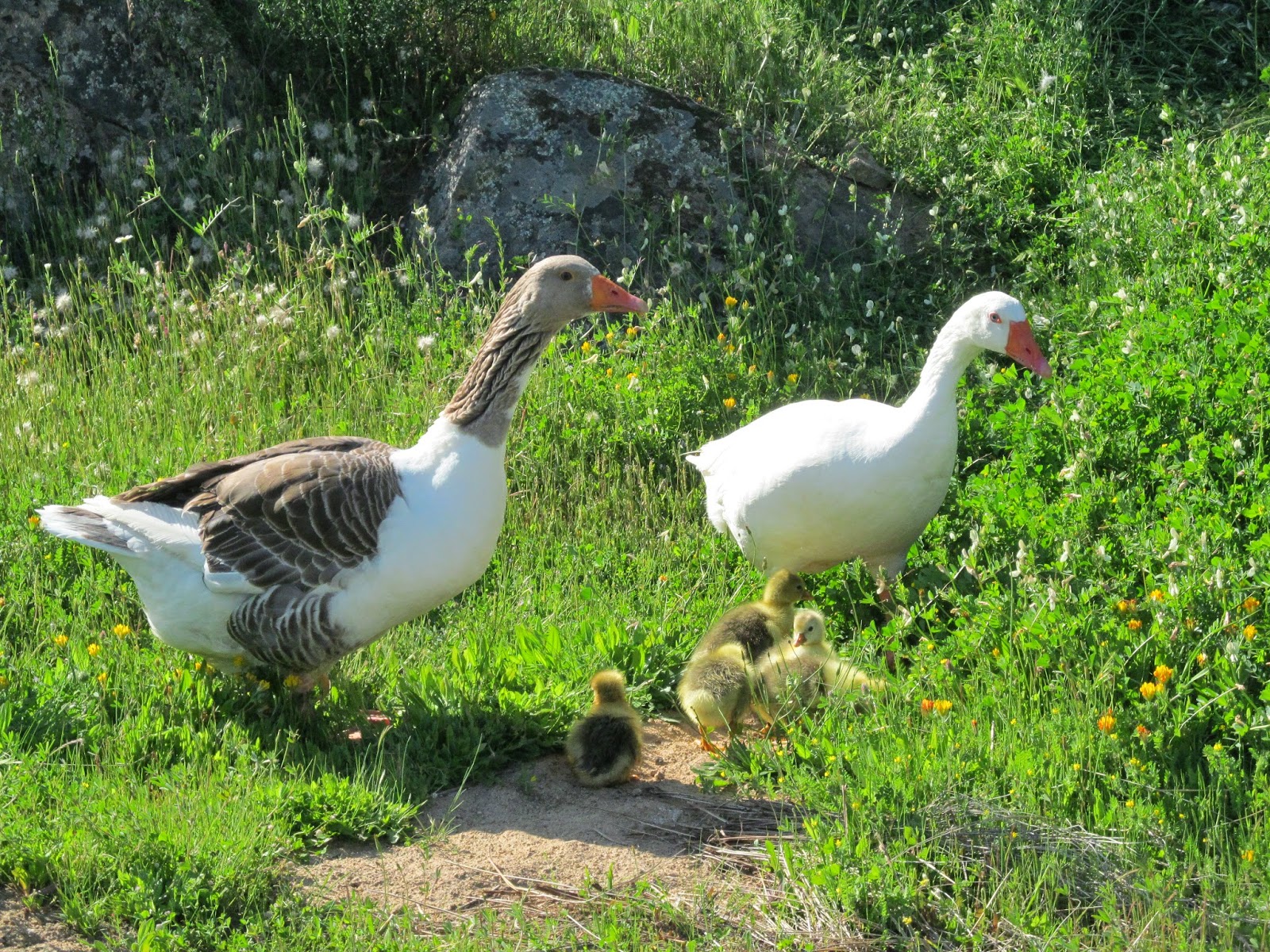 On day 31 we counted three goslings as their mother kept leaving the nest a little way and then changing her mind and going back again.  After three attempts to leave the nest (and one assumes the remaining eggs) she finally made up her mind that all the eggs that were going to hatch had hatched and she walked her babies down to the bottom of the enclosure and the water.  There were five little balls of fuzz following her. 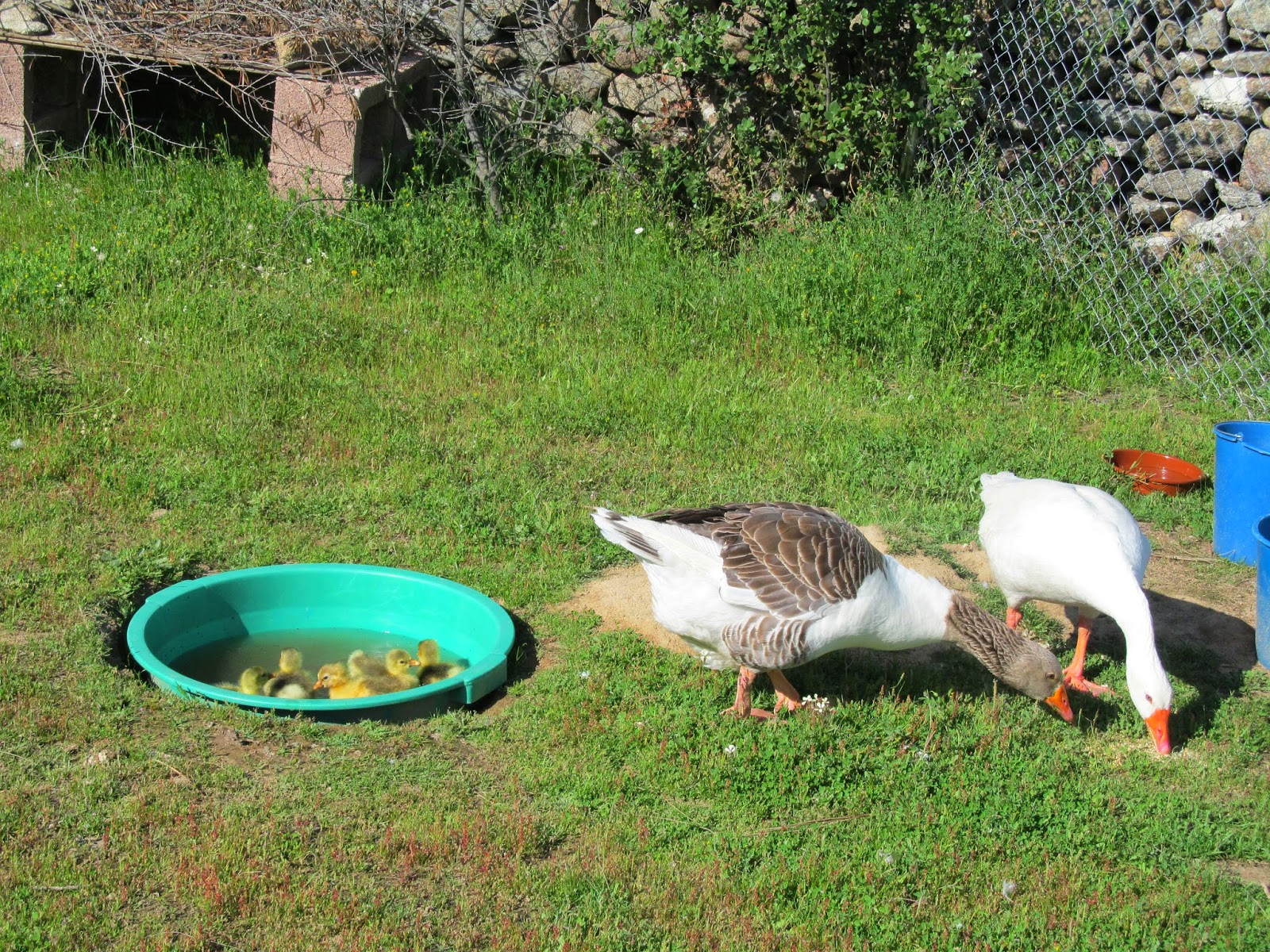 I think we perceived the danger before she did.  The water buckets which we sank into the ground so that the very fat mother goose could get in were only half full and yep... before we knew it one little gosling plopped into the water and bobbed about, followed by all the others.  They couldn't get out because the level of the water was too low.
We couldn't go to help because both mother and father are very very aggressive at the moment.  So, we ran the hose pipe through the fence and slowly filled the water bowl full with the idea that if it was full to the brim the little ones could hopefully scramble out. 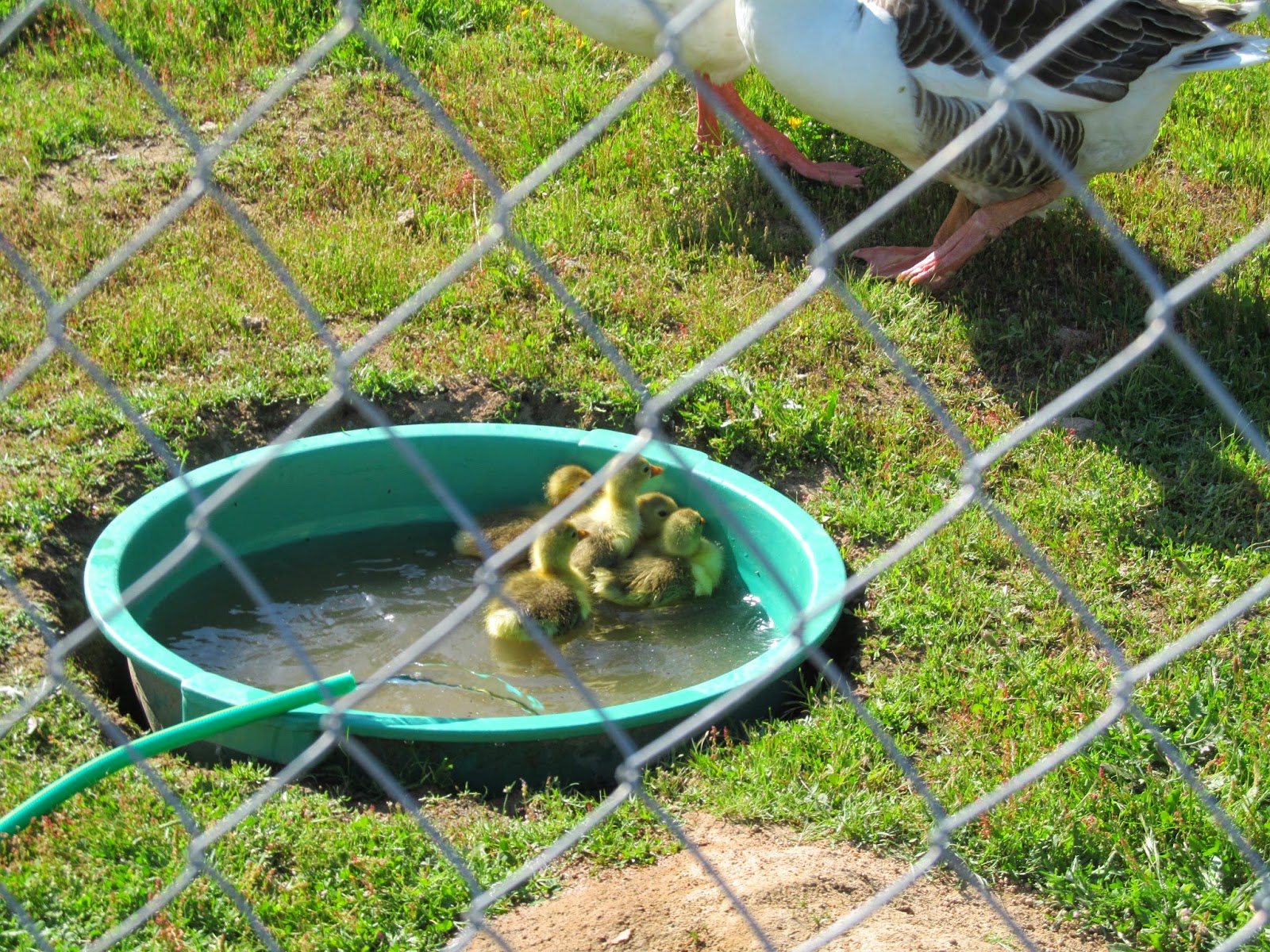 The parents are calling and calling and the goslings desperate to follow them but having great difficulty. 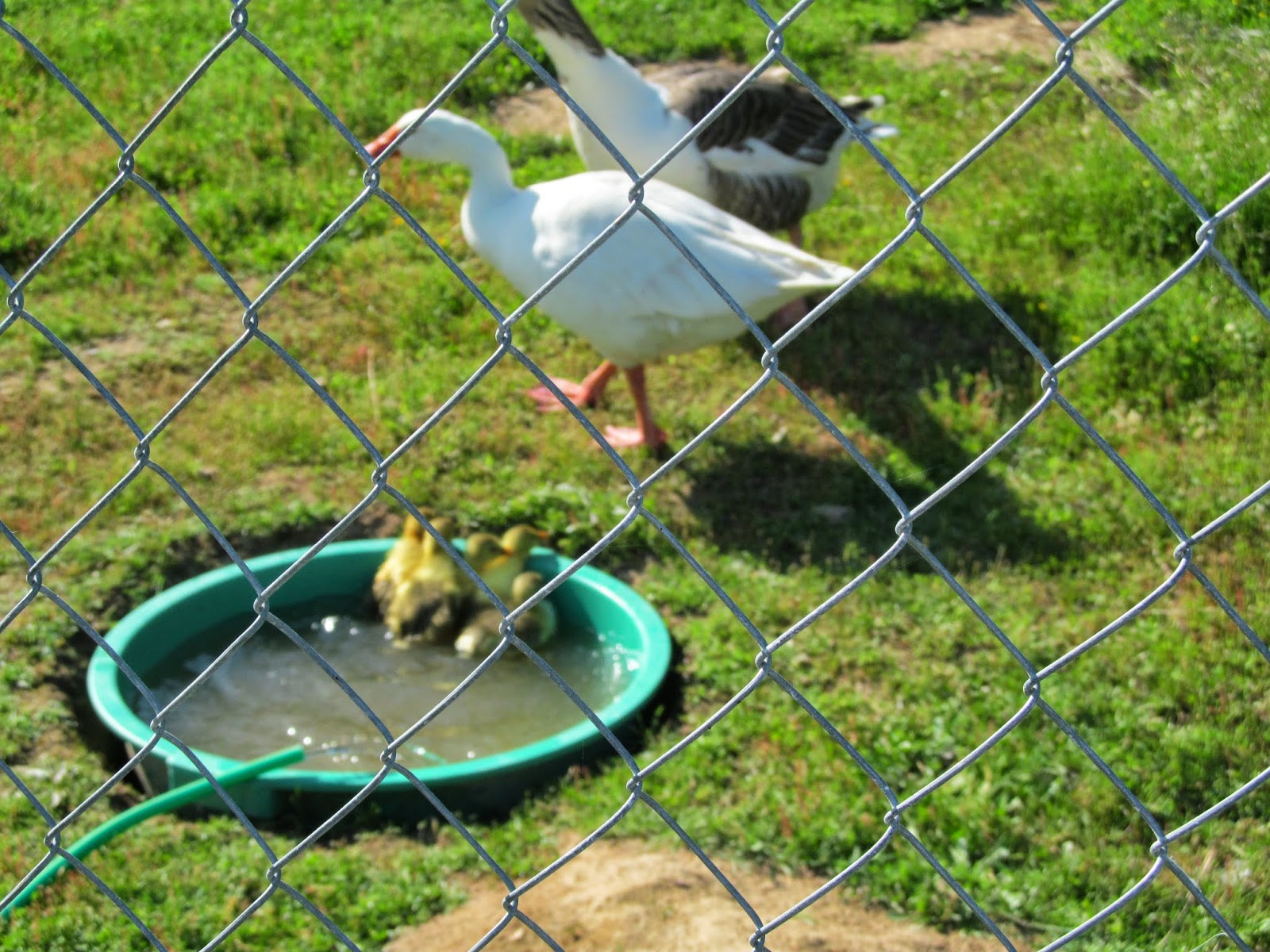 Finally, one little girl scrambles out. 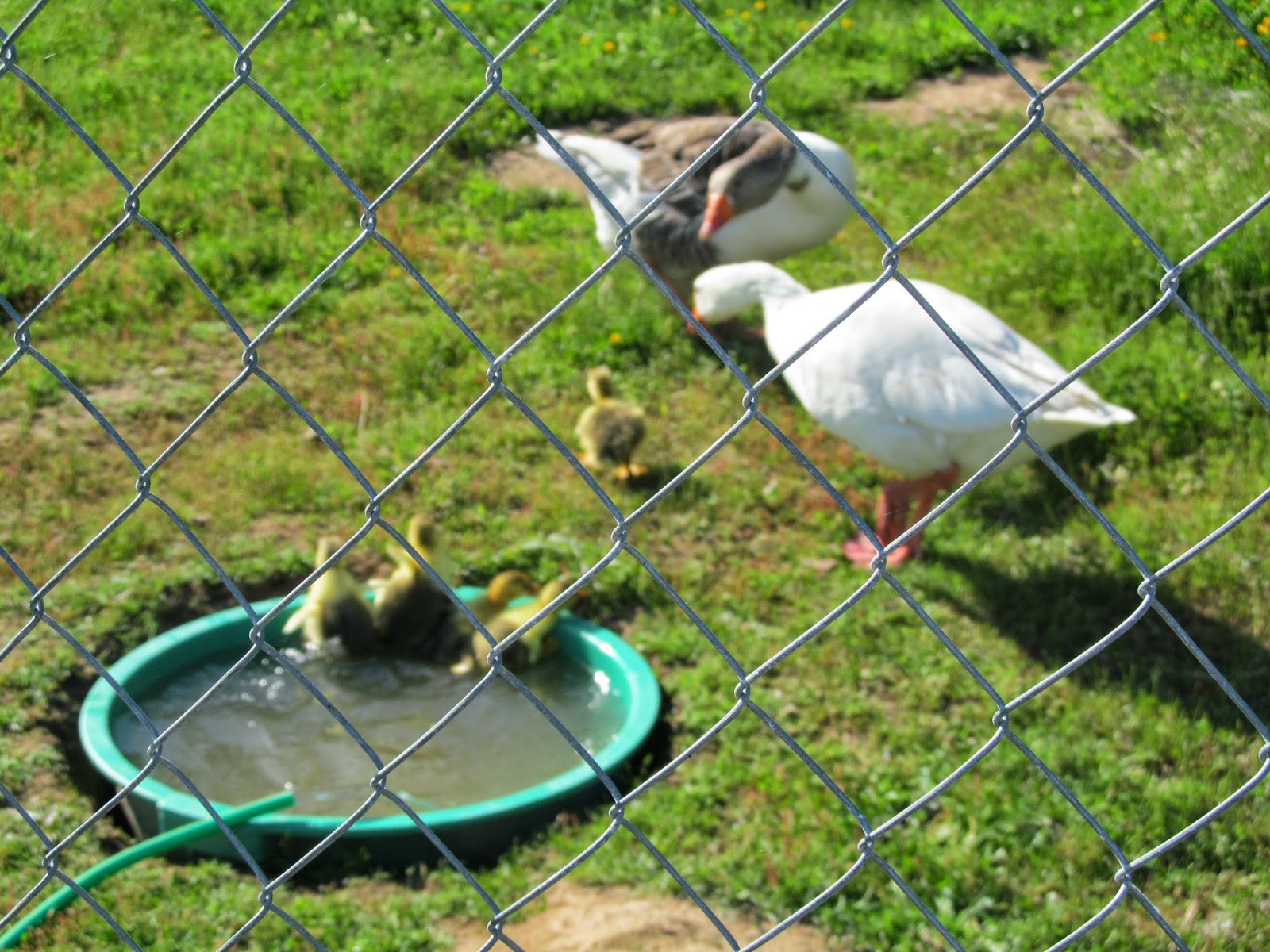 Followed by the others.... leaving the tiniest one last of all... and beginning to tire while daddy goose honks to encourage her. 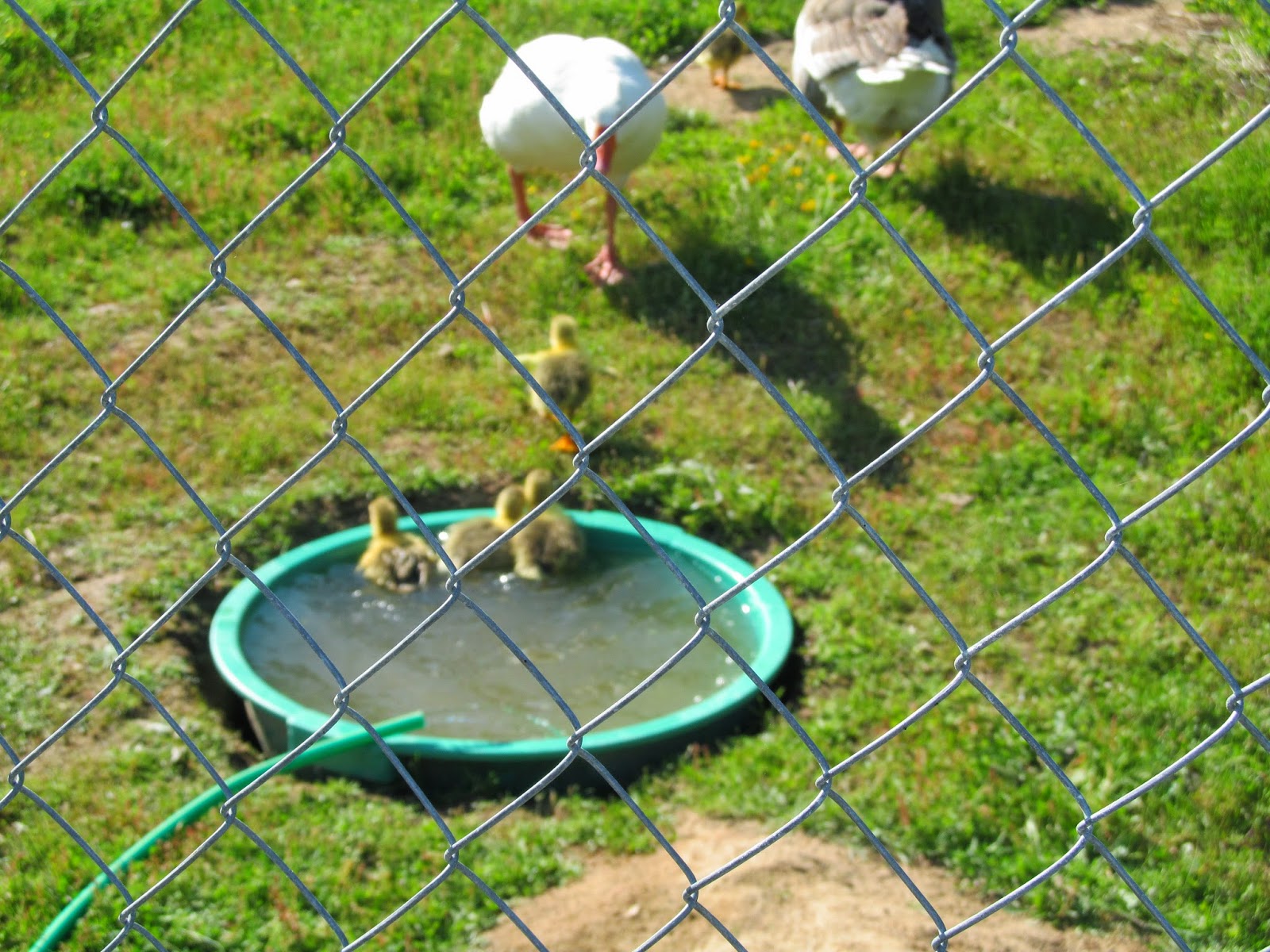 At last she scrambled out... balancing precariously on the edge of the water for a moment while we all held our breath. 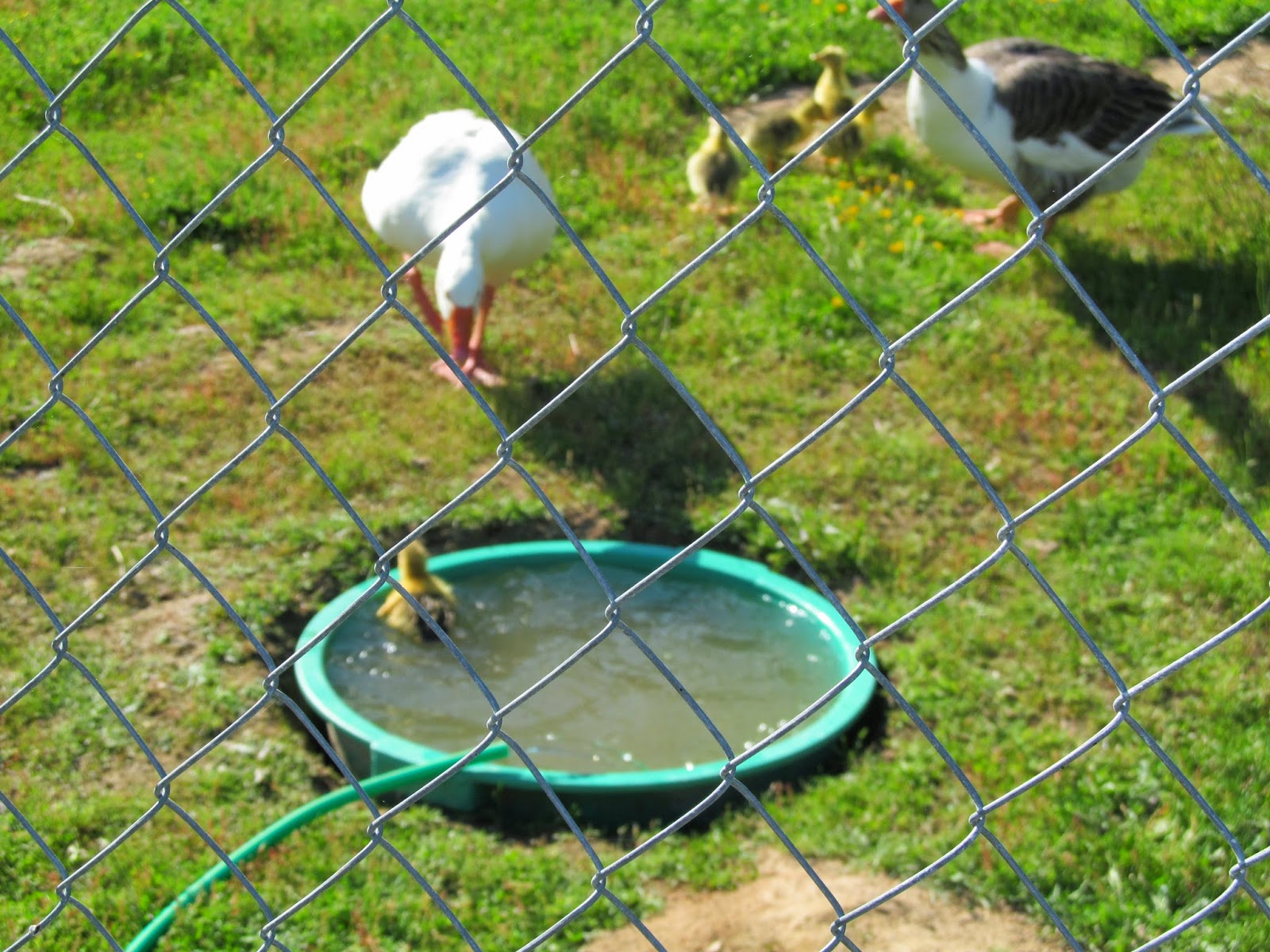 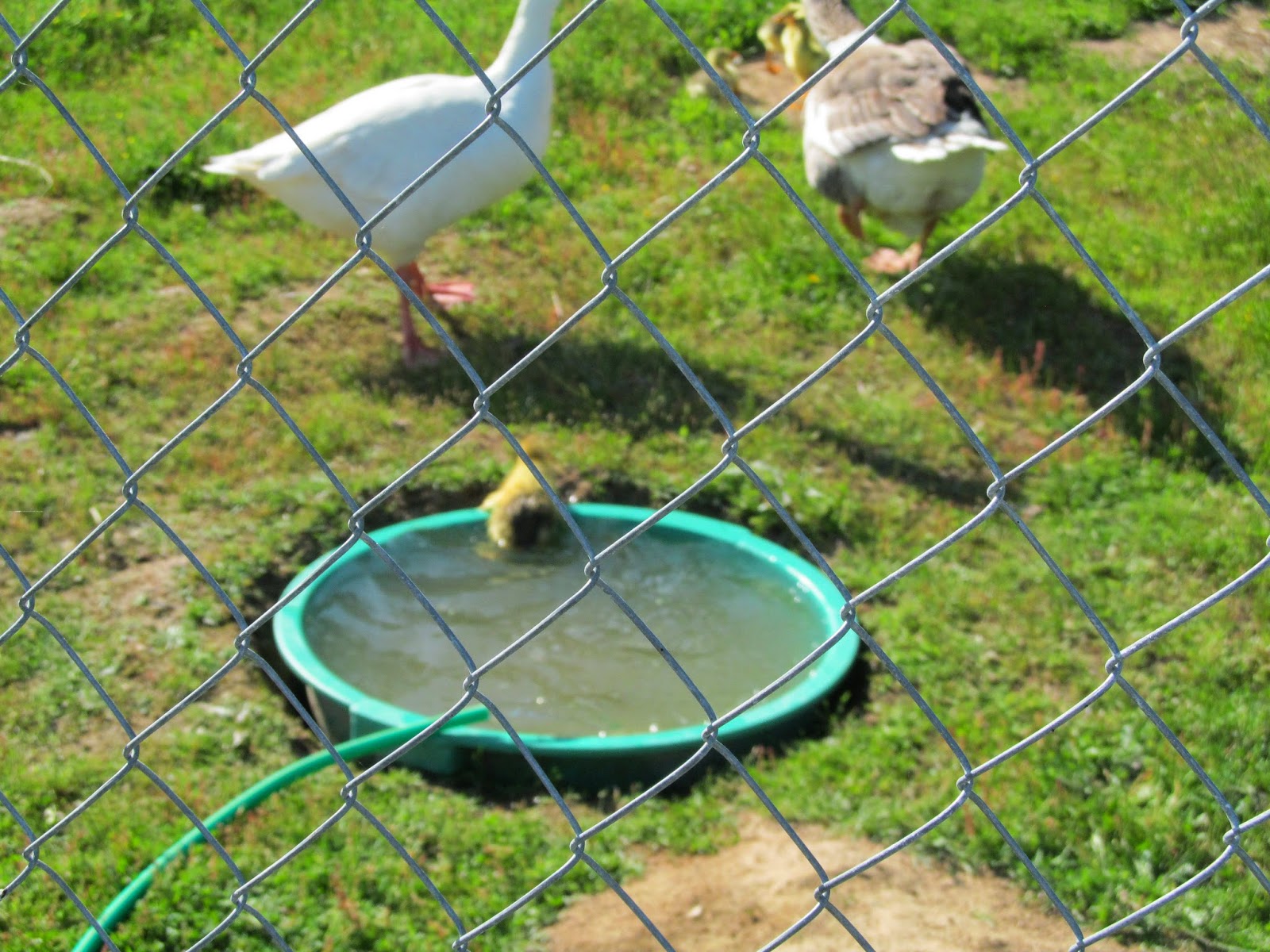 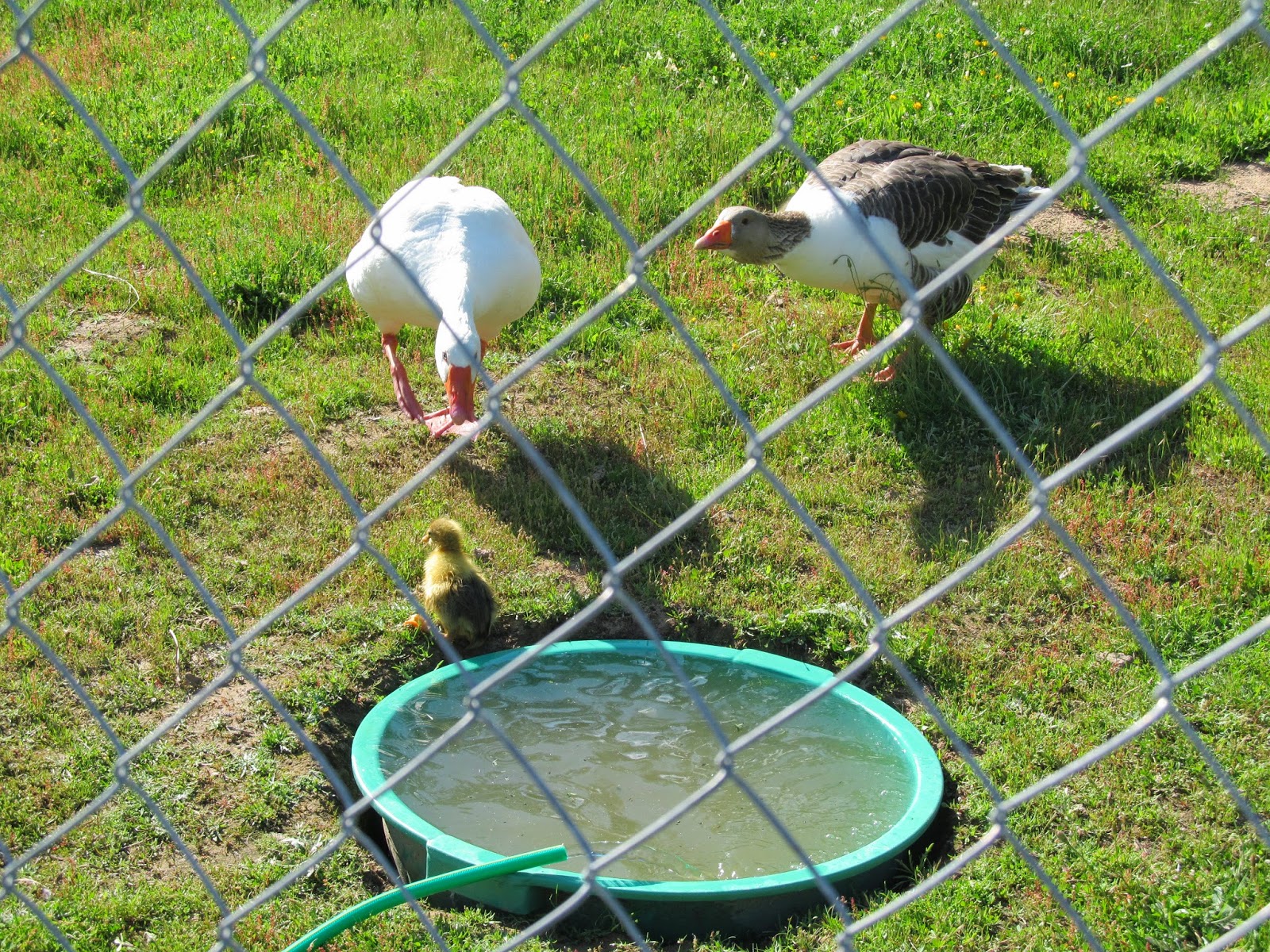 The solution?  Obviously we cannot leave the buckets like that so as a very quick and makeshift measure we covered them up.  Long term we need to place the buckets on the top of the boards so that the adults can still bath but the babies will not be able to get in.  We provided a cat litter tray which we have filled with water for the goslings and mum and dad will have to make do with the blue buckets for a drink. 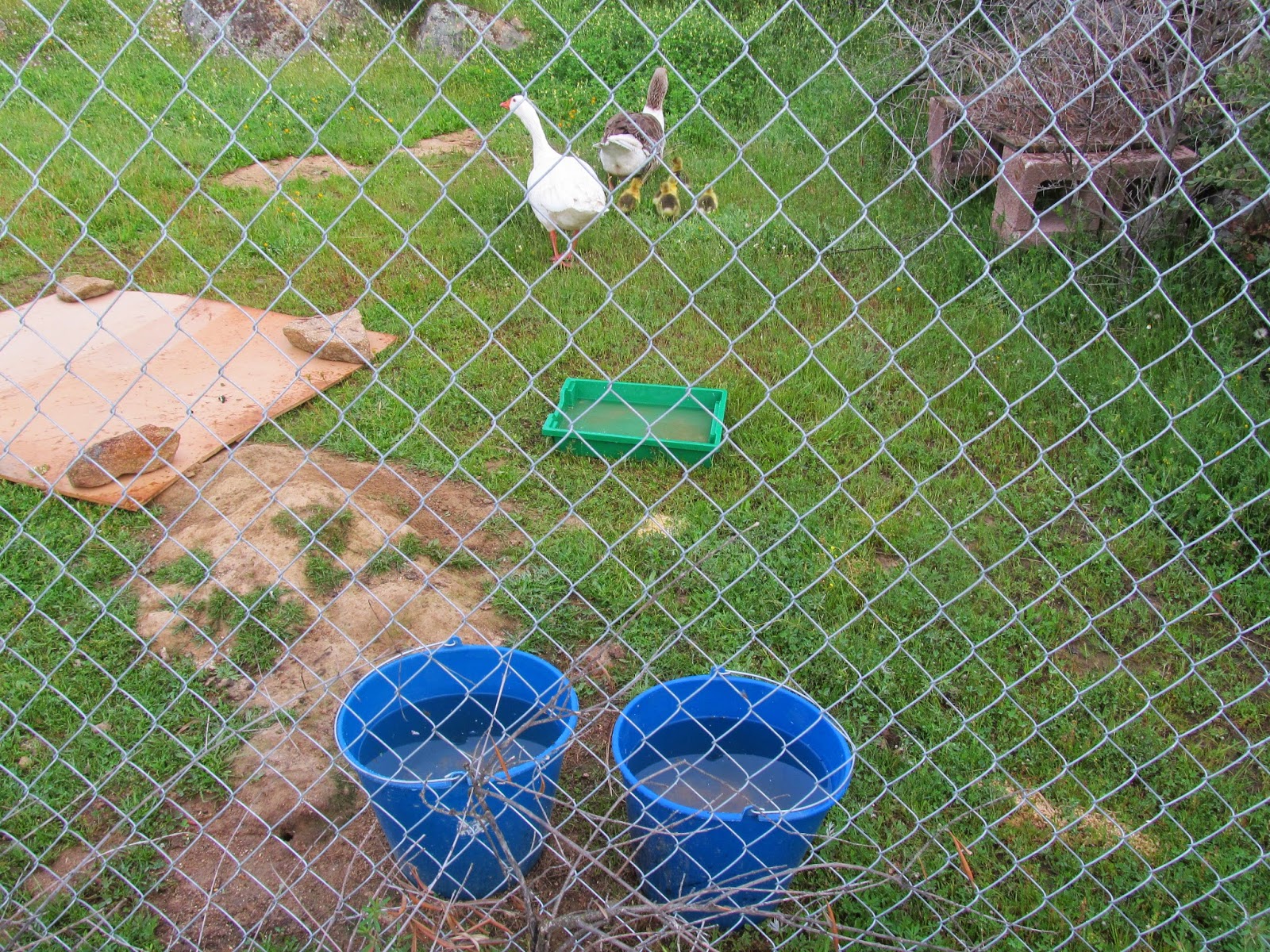 And Carmen and Miranda?  Yes they are doing very well.  Two weeks old now and during the day spending some of it in a pen outside and some of it following me around the finca. 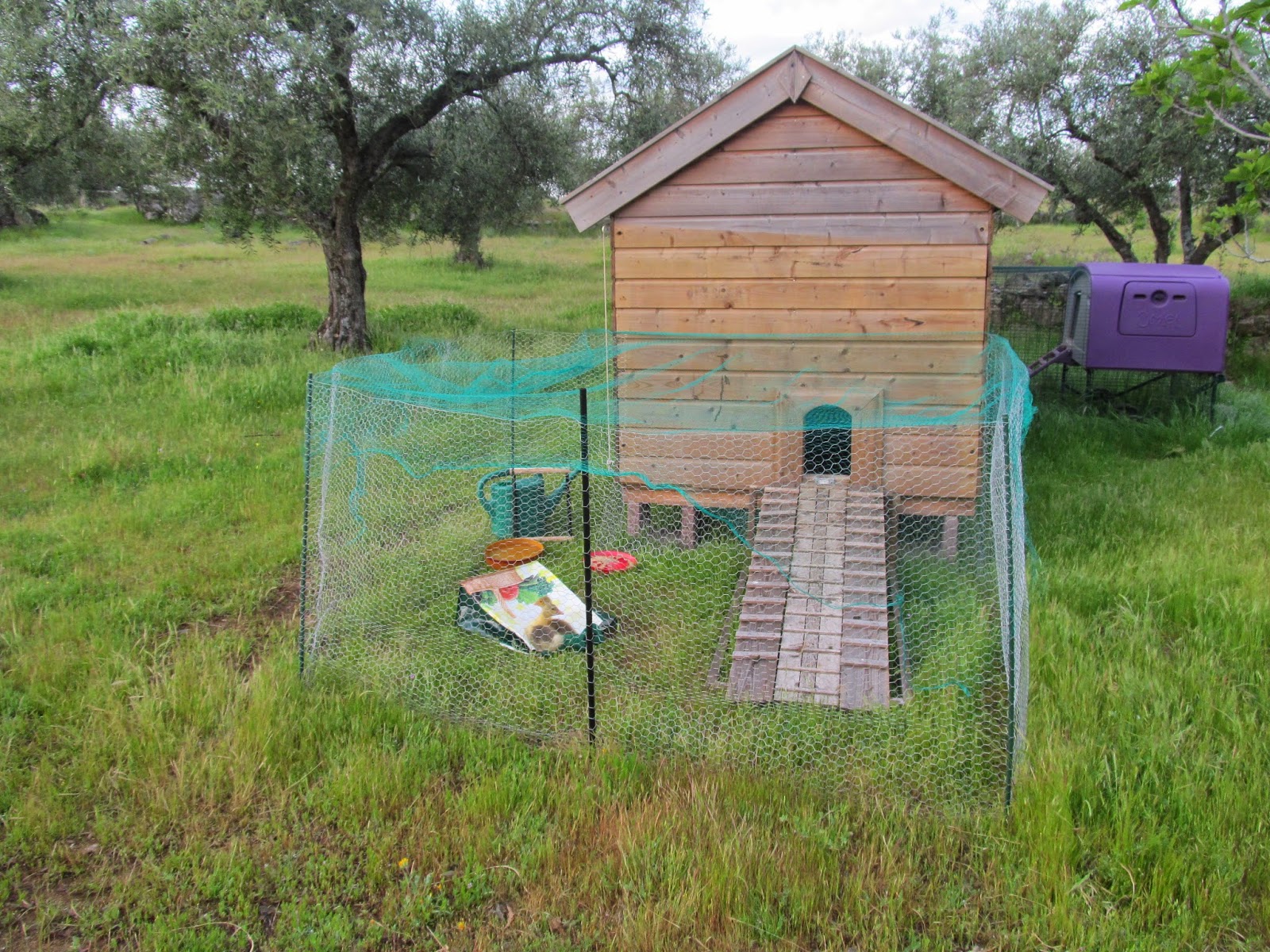 They are very good company while I am weeding the garden.  We bring them in to the house and put them in a cage during the night, they won't be spending the night outside until the temperature rises a little... not to make those of you in the UK jealous but its up around 30C during the day but drops below 15C during the night at the moment.  We are hoping it warms up at night soon because there is a concern that they may get used to hearing the sound of the tv in the evening and won't be able to sleep without it! 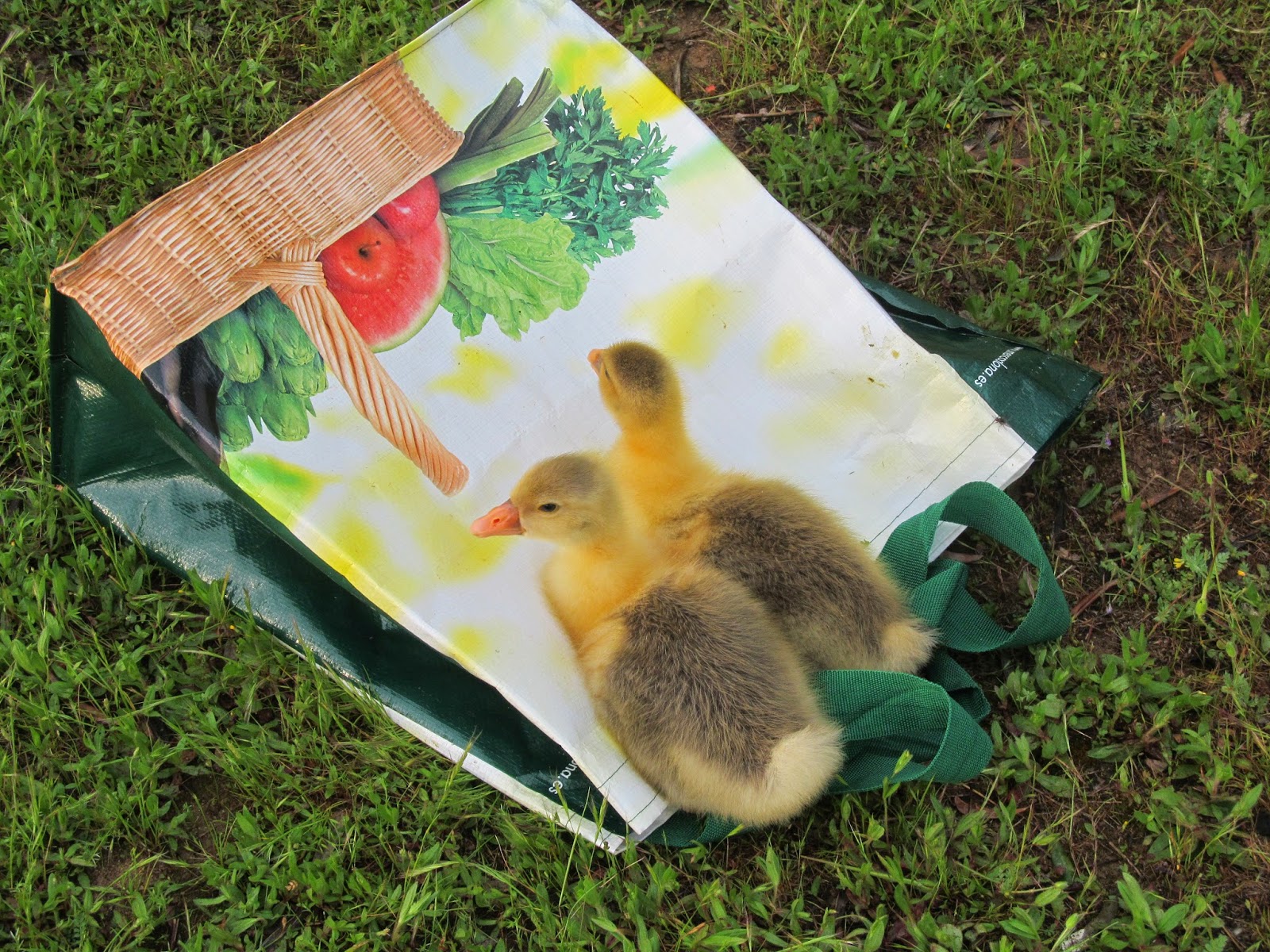 And the shopping bag?  Yes, well they grew too large for the bag around my neck, so to transport them anywhere quickly I used a shopping bag and they have grown attached to it, usually if I leave it with them they creep inside to snooze but here they are just resting on the top.  Although I am enjoying being Mother Goose the responsibility is huge and I shall be very pleased to leave it to the geese in future. 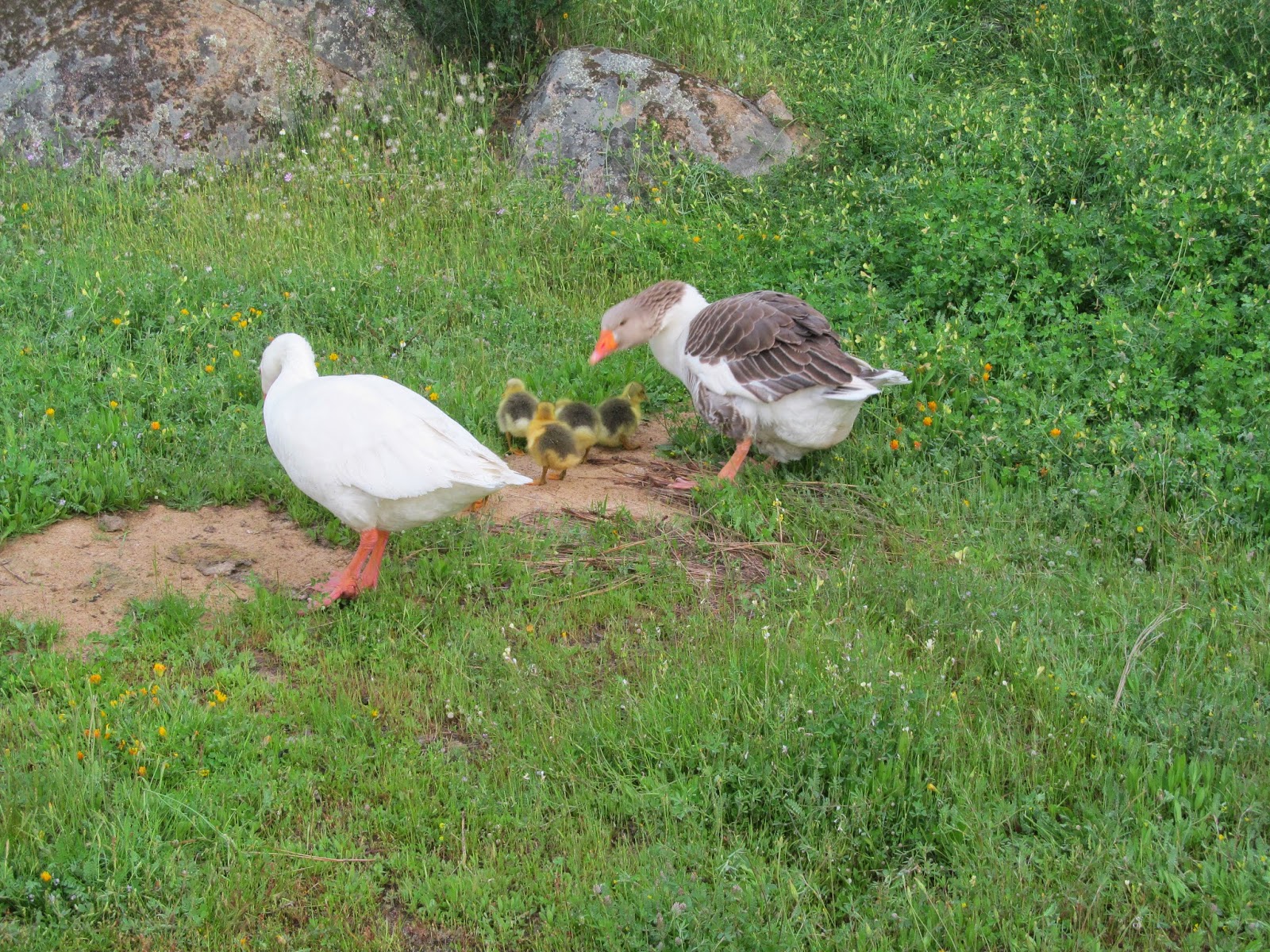 Animals birds Geese life the universe and all that What is a Technobilly?