- September 21, 2013
We have been living in the yurt and camping kitchen for 9 days now.  9 days into what was promised to be a three day building job.  Thank goodness for the yurt!  Although autumn it is very hot here in the afternoons.  The mornings begin cool – cool enough into thinking you need to wear jeans but by lunch time you are changing into shorts and tank tops and by 4 o’clock you are dreaming of throwing yourself into a swimming pool fully clothed in order to cool down. 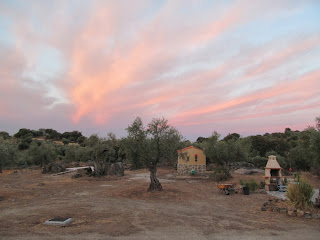 It was the harvest full moon a couple of nights ago and by some luck or strange coincidence we have positioned the yurt so that this moon tracks a path directly across the centre of the crown window.  We lay in bed, our pillows bathed in a silvery light, and watched a huge moon travel the sky until we fell asleep.  In the morning when I was walking down to the shower block to use the loo, the sun just skimming the hills behind me the moon was just bouncing down behind the hills in front – all fiery orange and enormous like a floating air balloon coming in to land.  It was all too quickly gone and all too beautiful to do justice with pen and paper.  For a while I remembered why I am so lucky and didn’t quite grimace so much at the smell in the shower block.

Our camping kitchen should be outside of the shower block but we have been forced to set up in the shower block itself by hordes of lazy September wasps that appear to have nothing better to do than harass us the moment they think we have food.  We always thought that the typical Mediterranean loo smell was caused by the fact that they seldom used u-bends here on the continent.  That is not the case here.  We have u-bends.  And sometimes the smell disappears but at other times it is really not good.  It is obviously something to do with our ecological septic tank, not an indication of any failure, the opposite is more likely, it is doing exactly what it is supposed to do… dealing with our waste, the by-product of which is unfortunately a little whiffy.  This would not be too much of an issue if we didn’t have to cook (and eat due to the wasps) within sniffing distance of the loos. 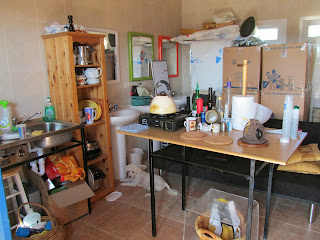 It has made us a little irritable with our builder who is really a very lovely chap who doesn’t deserve to be berated.  Most of his work has been in co-ordinating all the different tradespeople required to finish the job and he can’t always be blamed if they don’t turn up when they say they will.  The work progresses, albeit very very slowly.

some of it we have to blame ourselves for.  We changed our minds about the staircase, opting for a straight stair instead of a spiral.  This meant going back for another quote and so we have to wait for that...  Trying to do something constructive with our time... here I am sanding the tipi poles. 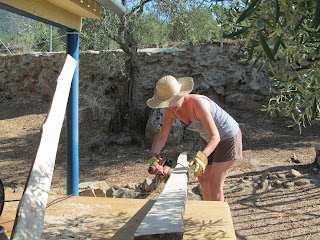 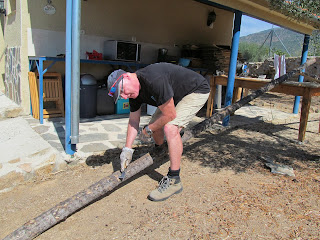 This really is a wonderful time of year – the weather would be perfect for getting on with things on the finca except that the house seems to dominate everything and it is hard to get any farm jobs done while we are trying to talk to plumbers and electricians and go look at kitchen tiles etc… I keep saying that things will be back to normal once the house is done and I can get into a routine.  I can’t wait… 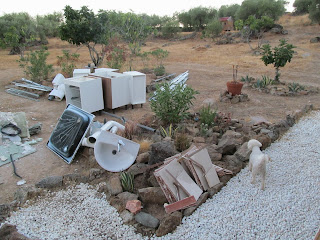 Another week Pedro promises and we shall be ready to do the painting… we have told him we want to paint ourselves… and we shall also tile the kitchen ourselves.  Choosing the jobs that we know we can do at our leisure and live in the house at the same time.  Another week… sigh. 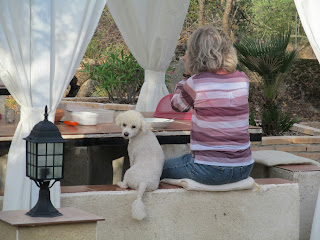 Nothing for it though.  And this morning as I lay in bed watching the morning dawn through the window, I noticed something that shouldn’t be there.  Normally we close the flap on the outside during the day to keep the heat out and roll it up at night so that we get the amazing view when we awake.  That little brown blob shouldn’t be there… I wonder what it is? 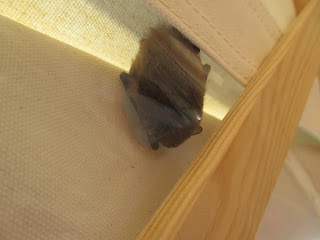 Oh my goodness!  Mmm. I think we may have to leave the flap down at nights in future.  As much as we have enjoyed watching her sleep and clean herself (and poop!) today I would not like to find all her mates joining her and making a jolly old mess of the canvas.  We don’t know if they are protected here like in the UK but we have left her alone.  Will close the flap tonight after she has flown and hopefully we won’t see her again… except perhaps on the wing as she flies by. 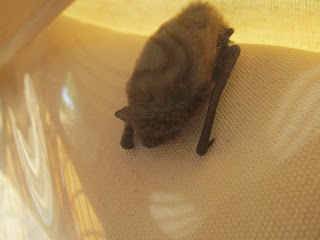 Animals Building Chit Chat Farming What is a Technobilly?