Casualties of the Summer and the Scorpion's Tale

- September 04, 2013
Temperatures are finally starting to cool down here now.  Having said that it's still 27C out there this morning, but night time temperatures have fallen enough to enable us to sleep back in the house in our own bed on our own lovely mattress. 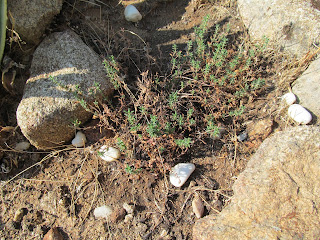 This summer has been a steep learning curve.  I knew I had to water the plants but I didn't realise just how much water was required.  When I thought I had given them enough I really hadn't and alas there have been casualties.  Here you can see the thyme just hanging on. 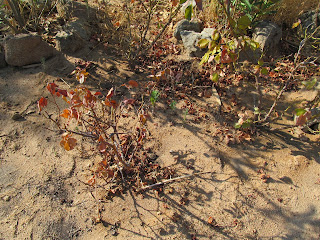 The roses are on their way out... they might just make it if they get a lot of tlc now... I have been trying but the leaves are still turning brown and dropping so it's touch and go.

In fact there is a lot of 'brown' leaves on a lot of plants that obviously survived other summers here and I can only put the blame on my inexperience. 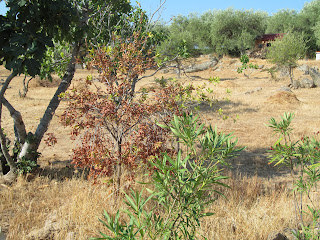 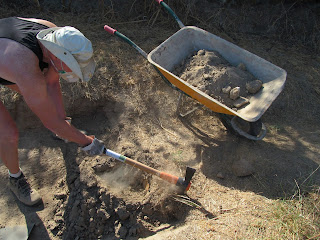 Water management is going to be a major part of our gardening in the future.  At one end of the finca we have a slope that means most of the rain water just runs off, it follows channels and gulleys down to the water meadow where it joins a fairly blocked stream and forms huge puddles in the ground. Obviously there are places on the finca where we want the water to slow down and other's where we need it to drain more freely.  Watching what happens in winter will help us decide what to do about it next year... but in the meantime, it seemed obvious to clear the stream bed of all rubbish. 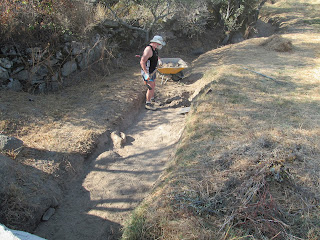 Our neighbour has concreted the base of his stream... This means the water comes down to us quite quickly bringing with it all sorts of debris and the sand washed down from upstream accumulates and spreads out onto the land either side forming a very muddy pool. 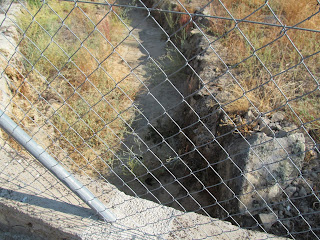 We are hoping that clearing the stream will encourage the water to drain away quicker from the water meadow and perhaps we will be able to use some of the meadow to grow stuff. 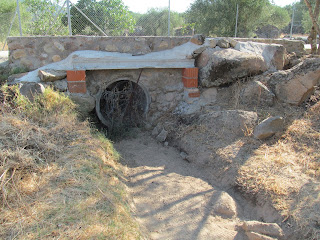 On the upper part of the finca where the water already flows too fast and we need it to stay on the land longer so that it will soak in to nourish our plants and trees we are thinking of digging swales.  I shall do a further post about swales when we start digging them but if you click here you will get a brief explanation. 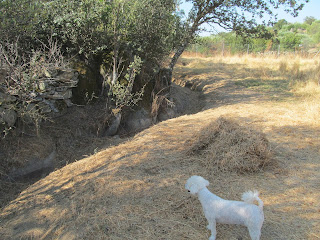 Fergus inspects the contour of the stream bed.

And now... on to the tale of the scorpion.  We are not bothered too much by bugs in the house, for which I am really glad. However late one night this week, I got up with a terrible headache, and thinking I probably hadn't drank enough during the day went into the kitchen for a glass of water.  I did not put the light on as there was a faint light shining through to the kitchen from another room.  I padded around in bare feet for a bit before I felt my foot brush against something on the floor where there shouldn't have been anything at all.  I looked down and there it was... a large scorpion about three to four inches long... it's tail was stretched out behind it on the floor.  Obviously it was already dead. 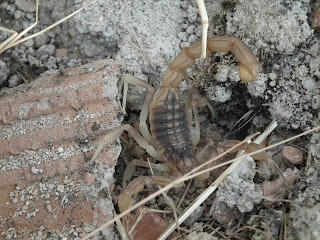 and here is a live one we disturbed from its hidey hole under the bins at the back of the house!

The fact that it was dead did not register with me for a good thirty seconds or so... and I didn't get down from the chair until after Steve had squished it to make sure and then put it in the bin... sorry no photo's of the dead one.  Altogether it was quite a traumatic experience for me.  At this point I discovered that adrenalin is a cure for a headache! But I then worried how it got onto my kitchen floor?  With 7 acres of finca outside there is no reason for a scorpion to want to come into the house.  Why it would come in and then just die right out in the open is also a mystery and quite out of character for the scorpions normal behaviour so we concluded that it was a 'present' from one of the cats.  Although not deadly (unless you are allergic or very elderly or very young or already ill...?) the scorpion can give you a nasty sting and make you feel really bad... the official advice is to go to A&E if you are stung.  I can't imagine how the cats managed to kill it so perhaps it was an opportune find.  I can do without any more of those thank you very much. 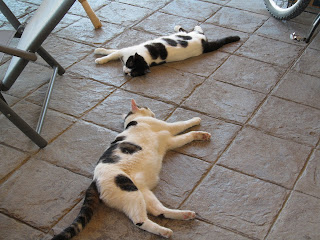