- August 03, 2013
Hoorah!  A post that is not about figs!  Well we all need a break from time to time so we decided to take a day out of the fig harvest and we went to the Proserpina Lake which is about an hour or so from us. 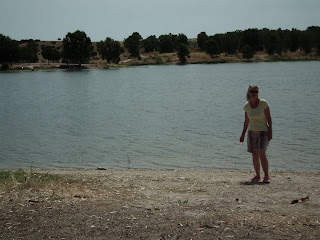 The Romans dammed the river and made themselves a handy reservoir which fed the nearby city of Merida via an aqueduct.  Merida was the capital city of Lusitania Province... the old Roman name for the area where we live. 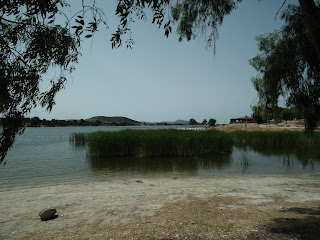 I love history and I especially love the feeling I get from being somewhere where people have been walking, talking, living, loving and doing all the stuff I do now, for a very long time.  I guess it gives me a sense of continuity and a feeling of belonging and permanence when life is so very transient... anyway... 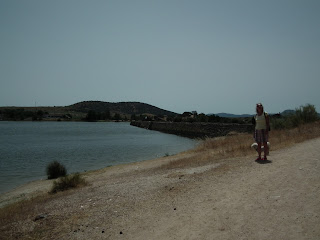 What does one do at a Roman lake?  Well swim of course.  The water was very green and pond like, very warm and there were fish in it.  We could see some really large ones jumping up for the dragon flies which skimmed the water but mostly they were just little fry. 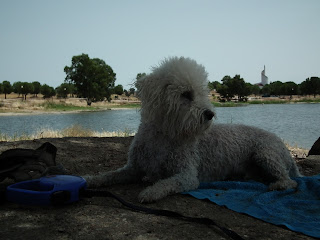 Around half of the lake there were several cafe's and bars and lots of signs that said no dogs allowed in the water but on the other half people were setting up little picnic sites beside the water and frolicking with their dogs in the lake.  So... Fergus swam for the very first time. 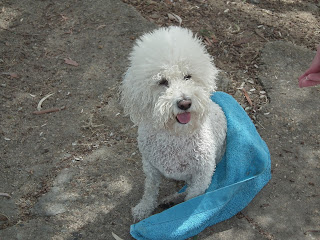 ... alas no photographs of him actually in the water but I assure you he did swim back to shore from about 5 yards out... he hated the water and he didn't like us being in it either and he barked a lot.  Eventually we had to come out just to stop him annoying other people with all his noise... not that there were many people about.  I do believe it gets crowded at the weekend though.

We walked across the dam and looked at the exhibition boards with information about how it was built and then set off for home.  Did I say that it was a day without figs?  Well not quite.  We took some with us in the cool box and they were really cold and refreshing to eat by the lake! 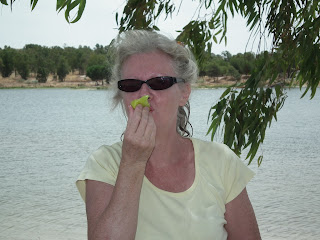 I like to think that 2,000 years ago a Roman Lady stood just about here munching away on a very ripe fig and thinking how good it was!
History holidays Spain The Dog