The First Person to eat a Fig...

- July 27, 2013
... must have thought he/she was in heaven!  We were waiting for our figs to turn purple like our fig tree in the UK did but we have now discovered that our figs are green!. 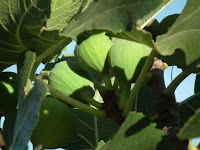 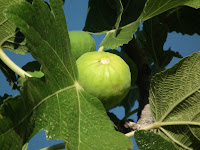 We do have one tree that seems to have purple skinned figs but they are not ripe yet.  Altogether we have 30 fig trees but some of them are just young trees and they don't have very many figs on them.  Anyway, we hadn't checked the figs for a while, thinking that we would notice purple skins once they went ripe and as I was passing I noticed a fig that was shining at me.  It was almost a luminescent green - it literally said 'eat me'.  So I did. !WoW! Soooo sweet!

Some of the trees are nowhere near ripe, they could be other varieties of figs, a few of the leaves look a little different.  But there are lots ripe right now and getting riper by the minute almost.  We shall have to check the trees and harvest every day now. 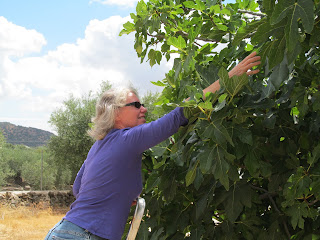 The birds have had a few, but not that many.  The occasional ant has been found on the figs after the birds have pecked them but again, very few. 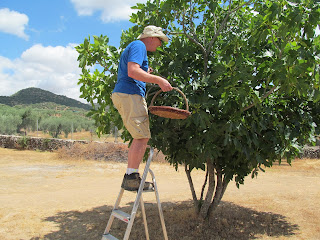 We harvested about a kilo of figs yesterday and another 4kg this morning.  Now, we could go to the Co-operativa and exchange our figs for money... but the going rate is only a few cents per kg so I would much rather do something with them myself. 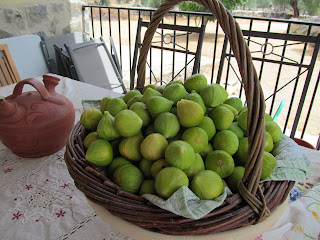 Yesterday we had a fresh fig salad for lunch.  Ripe figs still warm from the sun, iberico ham, lettuce, shavings of Portuguese Duro Cheese (parmesan would work) and a dressing of olive oil, lemon juice and a little honey. 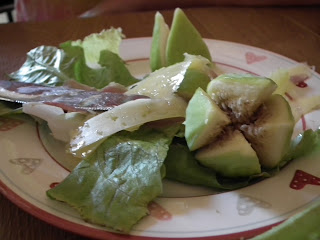 Today, we had another fresh fig lunch.  Cut a hole in the fig and fill it with a little blue cheese. 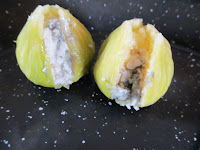 Brush with a little veggie oil and then grill them until the cheese just melts. 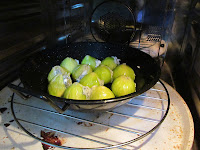 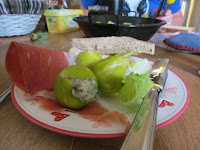 Serve with Iberico ham, lettuce and brown bread and butter.

We are going to a friends house this evening for something to eat and a few drinks, a bit of a social get together with some other people from the UK.  I am taking some figs in spiced syrup as a gift along with some fresh ones.  I know that this person doesn't have her own fig trees (well she does but they are too young to be producing yet). 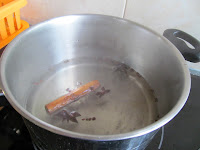 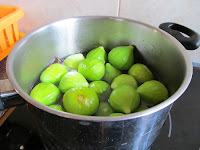 The figs in syrup can be served warm with ice cream or drained from the syrup and served with roast pork or lamb.  The recipe is very simple.  One cup of sugar, two cups of water, add some spices (cinnamon, star anise, red peppercorns, cardomom, cloves, vanilla... the list is endless and you choose what you have available) and bring to the boil.  Once the sugar has dissolved add the figs and then turn the heat down and simmer until they are very soft but not breaking apart.  Sterilise your jars and fill while still warm.  Alternatively simply cool and keep in the fridge and use within a couple of weeks. 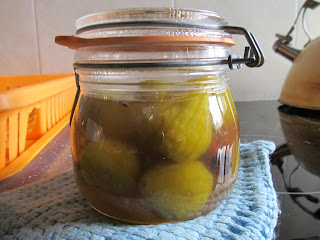 Now we can all see where things are going.  Within a month we shall be totally fed up of figs (a month!  What am I talking about... by the end of the week more like!).  We have yet to rig up something for drying them but I have already frozen some (with the idea of making jam at a later date), I have recipes for cakes, for sauces, for all sorts of things fig related, which hopefully will keep us in figs until next year's harvest.  since most of my kitchen equipment is still boxed up (waiting on the work being completed on our house) I have declared this year a 'doesn't count' year... so I may just give a lot away.  Next year, however, I shall be prepared and there will be a positive Fig Fest come July/August time!
Cooking Farming Spain