It's been a Technobilly kind of week!

- July 22, 2013
Sorry for the long pause between posts but this has been a strange week.  We were all set for our yurt and tipi turning up when the intrepid nomad driving the van (pulling the horsebox) within which is our yurt phoned us to say that after several thousand miles of journey over land and sea... the van had konked out just 50 miles away.  Did we have a vehicle large enough to come and collect the yurt and tipi?  er... no.  The guy in the garage who is called Jesus said it needed a new engine and would take about a week to get one from Madrid and to get it fitted.  Therefore we offered our new friend Kevin from The Really Interesting Tent Company bed and board for the week.  Kevin was pleased to exchange the bed and board for some work on the finca (loads of pruning of olive suckers done in high temperatures... thank you Kevin) and we put all our excitement about the yurt on hold for a week.  Today... Jesus being true to his word... the van is ready for collection and our yurt and tipi are coming home.  Yippeeeeee! More on that later.

It being a bit of a strange week, with all our plans for the beautification and decoration of the yurt interior put on hold, we tackled a couple of other issues in true Technobilly fashion.

The sun screen for the car window.  They are only about 6 euros to buy but all the same we had the tools on hand... an old cardboard box... some tin foil left by the previous owners which had been pulled off the roll in such a fashion that the width of the foil reduced significantly each time you unrolled it... it was now not usable for anything sensible to do with cooking... so... 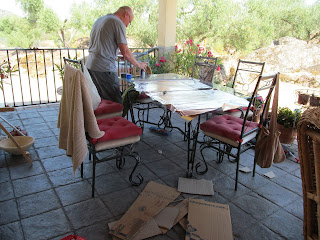 Some spray glue... some deft work with a knife and scissors and bobs your uncle one sun shade for the windscreen - it works perfectly apart from not being able to fold it up small to put it away... but since it is mostly for use at the house then I would say Well Done Steve!! 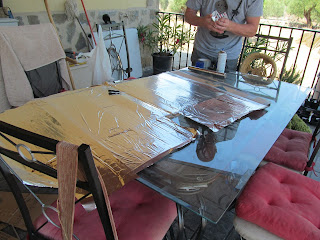 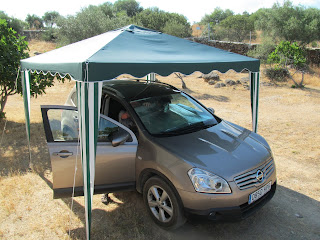 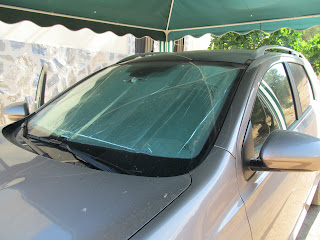 Our most pressing problem has been one of Midgies.  We purchased some mosquito nets for the beds on ebay only to find that in fact the main cause of our itchy bumps in the morning are not mosquito's but Midgies.  Tiny tiny things that get through the holes in the nets.  So we set off to the nearby town in search of muslin to make a new net.  No they didn't have any muslin... they had heard of it but they didn't have any, finally after pulling out roll after roll of different curtain fabric at huge prices... only to have me shake my head... the shop owner told me to wait and headed off to his other premises (which I think was actually his home) and brought back a very fine bridal net.  I only have this much left he said... this much turned out to be 5 metres and so prompted by the miriad of itchy lumps on my body I took it all... he knocked 5 euros off the price for me too! 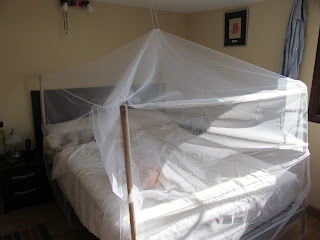 A bit of Technobilly design involving four broom handles and some embarrassingly bad sewing (considering I still had Kevin the tent maker staying with us!) produced this... 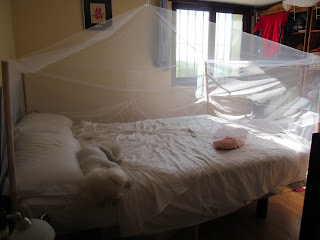 ... and the first itch free night for about a month.  However, now the dog is padding around half the night crying because he can't find his way on to the bed.  And... the second night two midgies managed to find their way in and set up camp on the broom handles... one at my head and one at Steve's... and in the morning when I whacked one it was full of blood - mine I think.  We may have to spray before bed as well, which I was hoping to avoid but hey ho.  Every problem has a solution... and by morning Fergus has managed to wheagle his way in... mmm... maybe he let the Midgies in!


Spain What is a Technobilly?