We have Babies on the finca!

- June 16, 2013
There is nothing like babies to make you feel all soft and gooey inside. 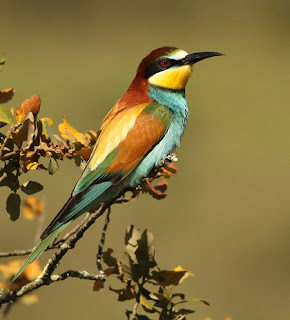 I must confess - this photograph came off the internet.  Our camera shy pair just won't stand still!

For the last couple of weeks we had hardly seen the brightly coloured bee eaters on the finca.  We began to think that they had abandoned the nest.  They build their nests in the sandy banks of rivers and ravines and they look for all the world like small rabbit holes.  When we first found the nest we didn't realise that it was a bird's nest and not a rodent of some kind. 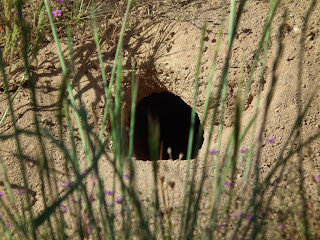 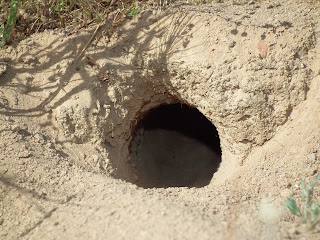 Apparently they can nest in colonies but we only have the one pair... but then our little ravine is barely more than a gulley where the water runs off when it rains.  We haven't been able to see inside and we wouldn't want to disturb the new parents so we don't know how many little ones they are feeding - quite a few hungry mouths I suspect.

Anyway, to cut a long story short, three days ago we spotted a great deal of to-ing and fro-ing at the nest site.  Mr and Mrs Bee-eater flying in and out all day long. 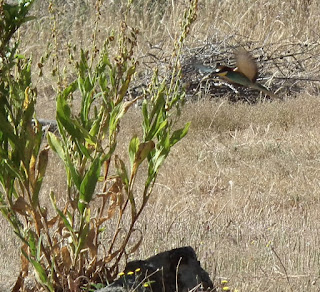 Yes I know, a bit blurry... not very clear.  We aren't wildlife photographers and it wasn't easy to get these shots I can tell you.  This is the Bee-eater heading down to the nest.

We are able to see the nest site from the veranda and have spent a lot of time just watching the action.  When they fly they look like kites soaring and swooping, their amazing colours flash against the blue sky and I can't help but smile. 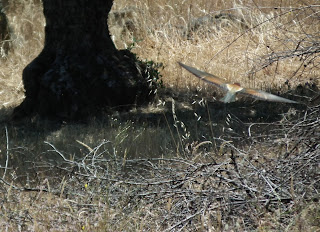 And just leaving the nest - heading out for more insects no doubt!

It's 32C in the shade here today and still they haven't stopped fetching insects for their babies.  They are very  good parents.  They reconnoitre the nest site first and often use my washing line as a vantage point before swooping in to deliver the 'take-away' meal to their babies.  I may have to stop using the washing line for a while - not that they seem to mind our presence but I would prefer not to have bird poo on my clean washing.

On exiting the nest they fly really fast across the finca making a distinctive call as they go.  I suspect this is to distract any predator that might be around.  When they approach the nest they are very quiet.

Someone else has been very quiet this last week or two and that is the Hoopoe.  He used to visit our Buddha statue every day, sometimes several times a day.  Now we just hear his calls in the distance first thing in the morning and after that... silence.  Perhaps he is a new dad too and is too busy collecting grubs for his babies.

Animals babies birds life the universe and all that Spain