- June 10, 2013
The soil on the finca is generally poor.  Very sandy, liable to washing away at the first hint of rain and during the hot months it dries hard like cement making digging completely impossible.  Not boding well for gardening.  Between our house and surrounding 2 acre garden and the campsite area is the water meadow. 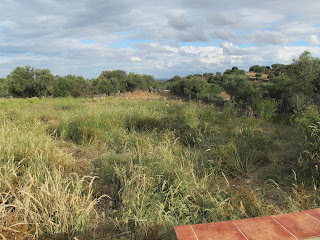 We first saw it in February after the wettest winter Spain has had since 1947 and it was boggy to say the least.  The ground slopes down towards a stream that runs the length of the bottom of the field.  There are a few large boulders in the field and an ancient well. 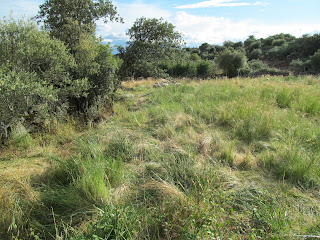 We hadn't actually walked the water meadow until just last week when Jose brought the bath for the sheep. 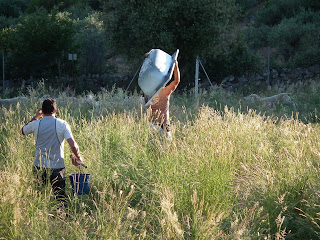 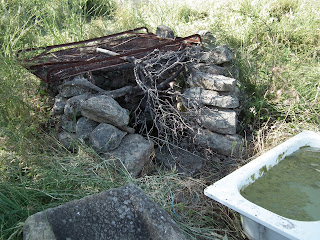 The old well, it's age could be anything from 50 years to 500, overflows during the wet season and as the levels drop filling the trough so the sheep can drink is important.  The old stone trough is a bit small and Jose brought along a bath which he filled in the traditional way.  The well has a cut out area and a stone lintel at ground level.  You stand on the lintel and swing a weighted bucket into the water.  The top of the old well is covered by a makeshift rusty bedstead and a branch of olive wood serves as a door to stop the not so bright sheep from falling in.

All the wells in the surrounding area are the same design with the cut out area to stand and swing your bucket from.  Some of them have been concreted in recent years and the cut out area filled in leaving only a small hole through which to put a hose (the other end of the hose being connected to a small generator and pump). 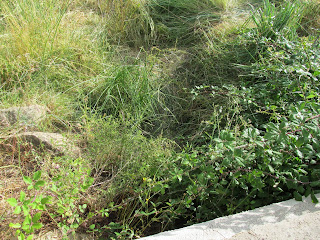 Because this part of the finca is very moist - even now the grass here is greener than elsewhere - we believe it will be the best area for doing something with.  But what?  Thoughts run along the lines of allotment style veggies, digging out a natural pond, fruit trees at the edges perhaps? 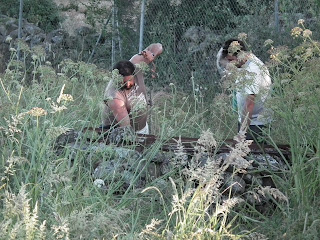 At the moment we are watching and waiting.  The sheep are making a dent in the waist high grass and the shape of the ground is slowly being revealed.  Thoughts are that we would like to put in some kind of drainage down towards the stream, perhaps with a clever irrigation system for the height of summer.  The stream itself, totally dry during the hot months, needs clearing - once the sheep have done their stuff we shall tackle that. 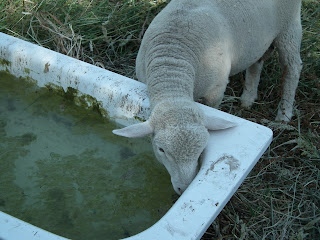 Then, we might start with a test area at the top of the field nearest the well and clear the ground.  We need to watch what happens when it rains.  We expect one of two things... either the well overflows and the field floods or the water table is so high that the ground just floods anyway.  Depending upon which/what we see will help us decide what to do with it.
Animals Gardening History Spain