- June 26, 2013
Temperatures have started creeping up here in Spain.  Our temperature guage is on the veranda in the shade.  Last night at just after midnight it read 31C.  Our bedroom is upstairs and even with the window open it was simply too hot so we made make-shift beds downstairs... in our cramped sitting-come-kitchen.  It was not entirely successful.  Mind you it would have been better if the dog hadn't needed out for the loo every five minutes... he sleeps most of the day and so is quite perky during the night when it is supposed to be cooler. 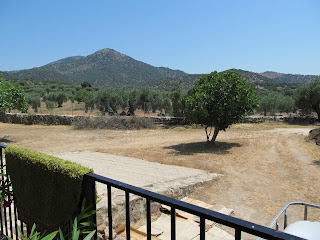 Of course we do have the air conditioning but we are very reluctant to use it, it isn't especially ecologically friendly and as we are still on mains electricity it is costly to run.  Actually that is probably the most immediate consideration... the cost.  We are on a fixed budget and you have to cut your cloth to suit your purse.

To cope with the heat our daily routine is very different from what it was in the UK.  We try to get up early, mind you this has proved quite difficult!  But some days we have managed to crawl out onto the veranda at around 7am with our cup of tea and little bottles of Actimel (you see we are not totally uncivilised!  And to be honest the pro-biotic mixture has proved its worth over the last 2 months while we coped with new food and water).   The sun is barely up over the hill and it is gloriously cool at 23C. 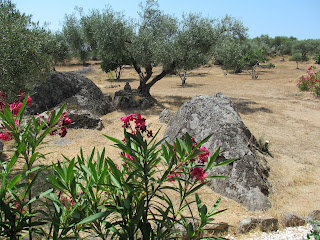 If we have work to do on the finca then its into our workclothes and out we go.  By 10am the temperature in the shade of our veranda is up around 29C or 30C and I have to call it a day.  Sometimes Steve manages to work on for another couple of hours, it depends upon whether there is a breeze or not.

At around 11am we have what we call Second Breakfast.  Since we usually only have a cup of tea first thing, technically this is First Breakfast, but we make it a good one, with eggs and toast and sometimes bacon too.  By the time we have eaten it is definitely too hot to leave the shade of the veranda.  So it's time to do a little housework, have a shower or do some job sat down in the shade. 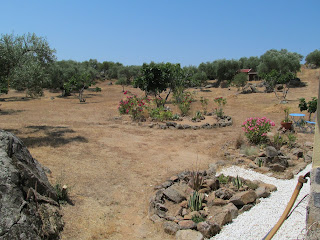 Lunch is usually between 2pm and 3pm.  And then comes the siesta.  What a sensible thing that is.  We often just read or simply rest on the veranda and nod off a bit.  Between 4pm and 5pm we have afternoon tea... 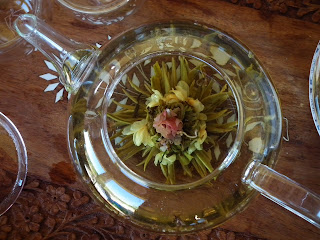 Jasmine or flower tea, sometimes with lemon, sometimes not, but always delightfully refreshing in the heat.  That makes us sound posh... not really, we are usually dripping with sweat once again by this time with 'bed hair' from the afternoon snooze and often feeling groggy and wishing we hadn't gone to sleep at all. 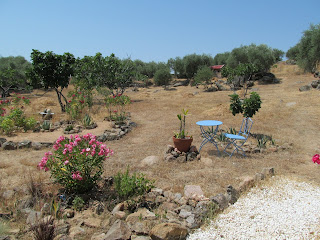 Now we had thought that we would be able to go back to work around 5pm, but the reality is that the temperature continues to rise and we begin to feel like prisoners unable to leave the house and surrounding veranda.  We look out at the finca and see all the jobs waiting to be done and its so frustrating not being able to go out and get on with it.  The temperature on the veranda is now just below 35C... I caved in and put the air con on and lay on the cool tiled floor with the dog.  The dog was panting... I just lay there and moaned a bit!  After half an hour and feeling so guilty at all the energy I was wasting I switched the air con off again, within a few minutes the temperature in the house was back up over 30C.

Finally.... around 9pm it is cool enough to walk the dog and we plan the work for the next day.  Our evening meal is usually taken around 10pm and we will shower again before watching some tv and going to bed between midnight and 1am.  Tonight we are going to sleep downstairs again and if temperatures continue to rise then we shall be moving beds outside and rigging up the mosquito nets. 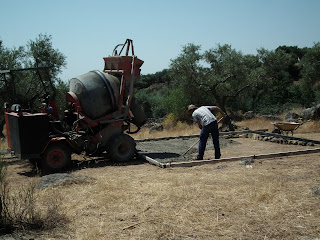 We hope that we will become used to this heat and be able to do a little more in the future - Pedro and his brother are laying the concrete and tile base for the yurt and tipi and they work on through the morning until 2pm before knocking off for lunch, he returns around 5pm and works until 8 or 9 in the evening. 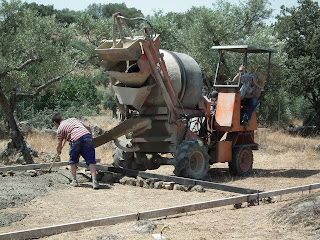 Don't believe all the horror stories about Spanish builders will you.  Pedro is conscientious and hard working,   quick and thorough, and even though he doesn't speak a word of English we are able to communicate through smiles, drawings and mime!  Although he tried not to show his true feelings he did look at the flapjack I gave him as if I was asking him to eat razor blades!  Ah well sometimes people are just set in their ways... like concrete. 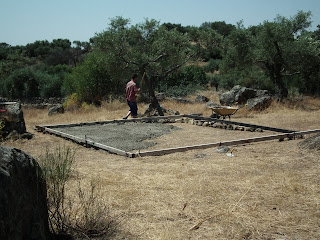