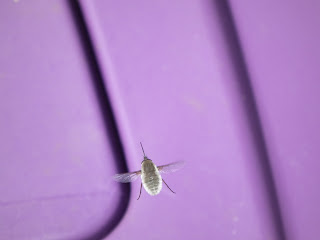 It looks like a furry bee with a long nose, except it hums at a higher pitch than a bee and it's movements were erratic and it stops totally still in mid air before darting off in another direction really fast.  I'd never seen one before.  Hubby ran back to the house to get his camera.

The bee hovered obligingly for the photograph (sorry if its a bit blurry but the wings on this thing go so fast they are practically invisible it took several photo's to get one in focus).  In fact it hovered so well that I began to muse that it had an anti-gravity device.  Well one thing led to another and my vivid imagination turned it into a tiny alien spacecraft full of little aliens come from afar to study us. 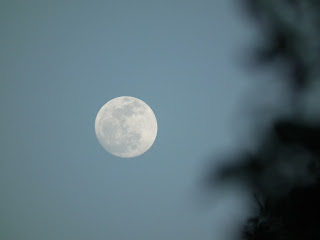 Actually it truly did start to follow me.  Everywhere I went there was this furry creature hovering close by.  Well perhaps there were some tiny aliens inside and they were on to me... they knew I knew.  If you see what I mean. 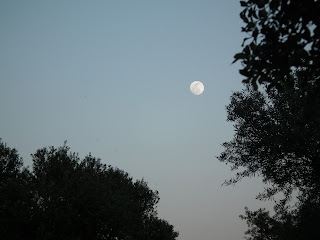 Finally I had to give up on the fiction... these little bee thingies were everywhere. Not a lone spaceship sent to study planet earth after all.  We looked them up on the internet... it is actually a Bee Fly one of the many many species of Bombylius.  They are found all over the world and they mimic bees.  They are very distinctive in the way they hover and dart about like humming birds and they all have furry bodies although some of them are different colours.  And... they are parasitic, laying their eggs in a regular bees nest or even inside of a host bee.  The larvae then eat their host alive.  Ooooh er.  Sounds like aliens to me! 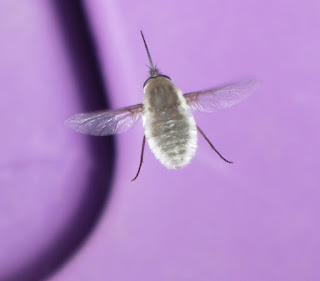 Insects life the universe and all that Spain