- January 28, 2013
I know that you have had it pretty cold over there in the UK of late.  But before you think that I am having a mild winter here in sunny Spain let me tell you that I have been living in very cold conditions by comparison to how I lived in the UK.  Firstly, although I have central heating I am not using it unless the temperature in the house drops below 10 degrees C.  The average temperature in my living room (where there is a wood fire) is around 14 degrees C.  First thing in the morning it has consistently been 11 degrees C by the evening when the wood fire has been going all day it creeps up to 14 or 15 degrees C.  In the UK my central heating kept the house at a constant 17 degrees C. The rest of the house here is not heated at all.  I shower only once every two days - the bathroom is just too cold to bear every day.  My face cream is icy cold on my skin in the morning and my roll on deodorant seems reluctant to ... well... roll on! 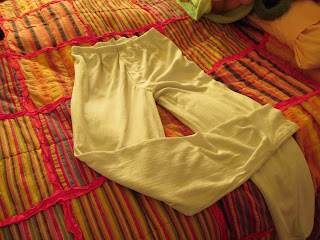 When keeping warm the first thing to consider is clothing.  I have several pairs of thermal underwear.  My brother's cast off long-johns which he used when working winters in Kazakstan have come in really useful.  Sometimes I have even worn woolly tights underneath the long-johns with a pair of jeans on top of that.  Bra, thermal vest, t shirt, long sleeved t shirt and then jumper on top of that. 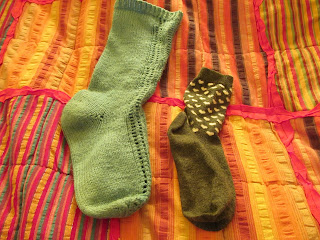 The mis-shapen woolly hand knitted sock on the left is far warmer than the bought mass-produced sock on the right... but I wear them both and that works well.  And then there is the best article of clothing I own!  A gift from my son ... it's called a Softie Suit.  It is basically down filled trousers and jacket.  It takes only a minute or two for me to warm up in this.  I wear it first thing in the morning until the fire gets going and I put it on at night if I want to stay up late to watch a film and don't want to put any more wood on the fire.  I use it to take the dog outside in the middle of the night (if need be) just on top of my pj's and I am toastie warm. 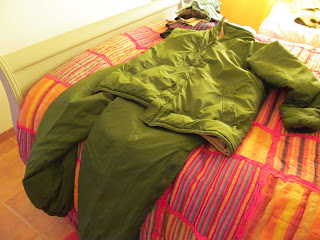 Aren't all those layers uncomfortable?  Well... yes, but you get used to them. 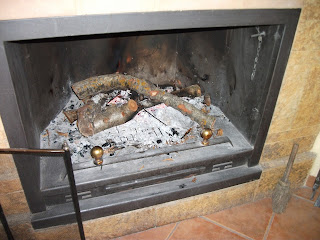 Before even considering how you are going to heat your house it would be wise to minimise the loss of heat through windows, door frames etc... having said that, let me tell you, draught management is a joke in this house... when you can feel the wind whistling through the electric sockets in the wall then you know you are really onto a losing battle!  After sorting out the loss of heat by adding things like draught excluders and door sausage dogs etc.. there is the fire to consider.  An open fireplace is not as fuel efficient as a stove (whether woodburning or multi fuel) but this isn't my house so I have to make do with what I have. 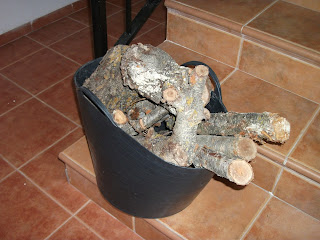 Wood is certainly the cheapest form of heating.  We ordered a large pile of logs to be delivered and they arrived in a dumper truck who simply deposited them in a huge heap in the garden.  So they have to be sorted and stacked under the verandah to keep dry and then hauled up the stairs to the sitting room for use on the fire.  I call this whole process ‘Woodology’. 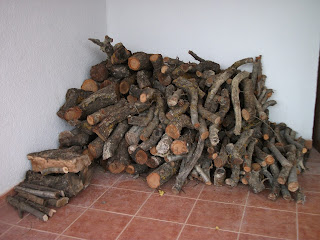 It’s the art of knowing which wood will burn hottest, which wood will be consumed really quickly and not give out too much heat,  of stacking it neatly in such a way that you can pick the exact piece of wood that you need for the type and size of fire that you want.  There is, for example, wood that is best for starting the fire and then wood that is best for keeping it going and then wood for smouldering over night to maintain a reasonable temperature in the room for the cats to enjoy in the early hours of the morning.  The ideal situation is to buy green wood (that is wood that has been freshly cut and hasn't dried out) and then dry it yourself by keeping it for a year, stacked in a barn or under cover.  Green wood is cheaper than aged wood but it doesn't burn well at all.  If you bought green wood every year and then stored it for use the following year you would save some money - but of course you have to have a lot of space to store an entire winter's worth of wood. 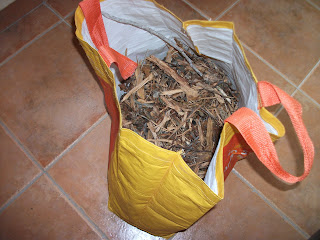 I have had an open fire before but it was a coal fire with only small amounts of kindling used to start it in the morning.  A purely wood fire is a totally different kettle of fish.  When it is your only form of heat you learn very quickly.  And it seems to be a woman’s job to light it and keep it going, not being sexist, it just seems to have turned out that way.  Not just in my house, but in my daughter’s house and in all the neighbouring Spanish houses too.  It's really funny how quickly you start admiring your own fire.  And other people's too... 'oooh that's a nice fire you have there' when spying a fire in perfect proportion with just the right sized flames! 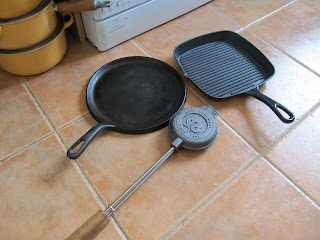 Yet to be learned is the art of cooking on an open fire.  I fully intend to learn this skill.   Certainly if you have to use the fuel to heat the house anyway, you might as well try and make your dinner on it too.  With this goal in mind, I have invested in several cast iron pieces of cookware - and more on order too.  As I experiment with each one I shall keep you posted... looking forward to griddle scones, toasted sandwiches and slow cooked pot roasts!  Watch this space.

ps.  Hubby turning up next week and we are off on a house buying trip!  EXCITING or what?
Spain What is a Technobilly?