- January 10, 2013
The olive oil factory in the village has been open since the 1st December... it hums and throbs away every day of the week except for Christmas Day, New Year's Day and Sundays. 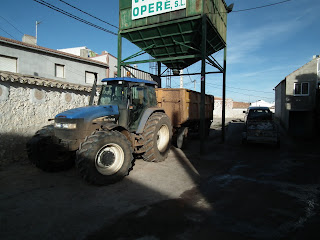 I recently read an article about the olive harvest in Italy, it was written in the Times and they were obviously trying to promote the small producer of an artisanal olive oil.  It made the whole harvest seem like something from a rural idyll... or the olivio advert on tv where the elderly are sailing through the air to harvest a single olive high up in the tree.  Well let me tell you, it aint like that here! 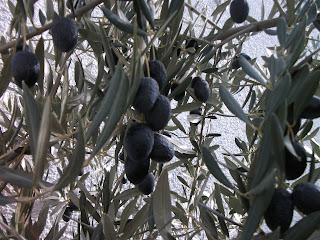 Firstly it is very cold and the pickers have to wear plenty of layers and woolly hats and scarves.  Although they do use a machine... a tractor with a grabbie thingy on the front which takes hold of the tree and gives it a good shake... it is still very hard physical labour.  Firstly nets are spread on the ground around the tree and then the machine gives it a good shake and people whack the stubborn olives with a stick to dislodge them.  Then the nets are gathered up and the olives spill into the trailer.  There is a constant bending and stretching and heaving of heavy nets... and it goes on all day until the light fails.  Some of the olive trees are planted on steep slopes where the tractors cannot get access and these have to be done by hand.  That is, the tree is shaken and beaten with large sticks until every last olive drops off. 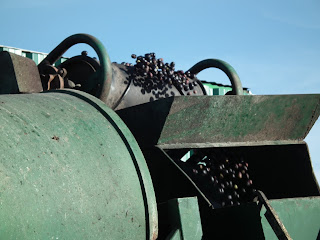 When the trailer gets to the factory the olives are weighed.  They have a large weighing scales that knows the weight of the trailer and can calculate how much olives.  The olives are then tipped onto a conveyer where air is blown over them to remove the leaves and stray twigs that have been caught in the nets along with the olives. 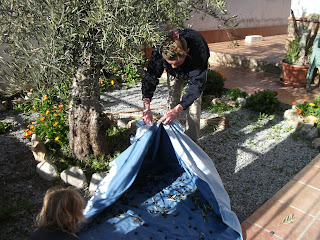 We harvested our olive tree, and my daughter's tree next door and were give some more olives from her in-laws who live not too far away.  The process we used was pretty much the same as the main harvest... a sheet spread on the ground... some vigorous whacking with sticks and then gathering the olives up and putting them in a wheelbarrow. 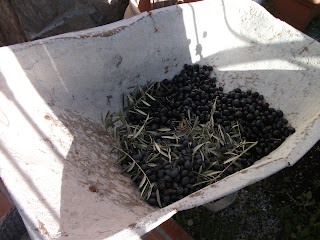 It has been a very poor year, hardly any rain and the trees are not producing half as many olives as last year... this means the price of olive oil will go up. 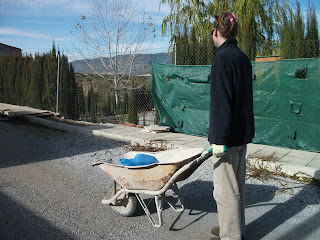 After weighing the olives are mashed and then spun in a centrifuge to extract the oil. 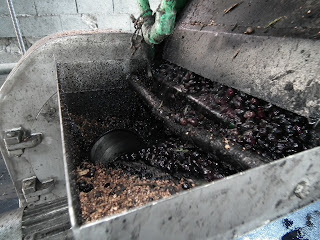 No chemicals are used, only a little heat... of course the best olive oil is a cold pressed oil, using heat can mean a slight drop in vitamins and nutrients in the oil, but seriously the oil produced by my local factory is wonderful and I don't feel the need to pay twice the price for a cold pressed oil, whatever the vitamin content! 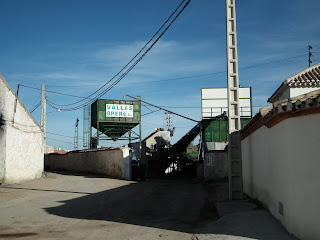 The discarded pips are taken away and made into bricks for burning on the fire.  It has been a few weeks since the factory let us in to take photographs and I have to be honest in not remembering each of the stages that the olives went through... hopefully the photographs will speak for themselves. 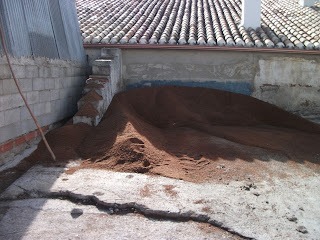 We went to the office to see how much we would get paid for our very meagre harvest... 3 euros for my daughter's piggy bank - that's 40 cents a kg and the lady in the office kindly rounded it up for her.  Olive growing is not lucrative and I can't imagine how anyone makes any money at it all... certainly the growers don't. 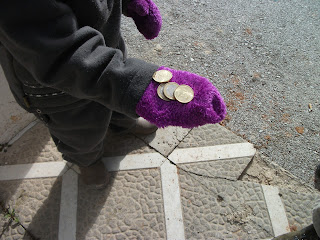 The factory handles both organic and ordinary olives and keeps each separate.  Inside we were told to watch how we walked because the floor was slippy... it was spotlessly clean but there was so much olive oil in the atmosphere you could taste it and feel it on your face... the air was warm and pungent and the noise from the machinery deafening.  These large containers hold the oil until it is bottled or shipped out... some is sold to other manufacturers for bottling and some is sold direct from the factory to the locals. 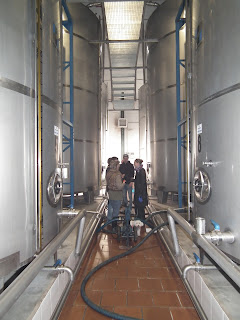 Altogether the factory handles about half a million litres of oil in a season.  By February the harvest is all but over... at the end of February the factory is cleaned and closed until it begins again in December 2013. 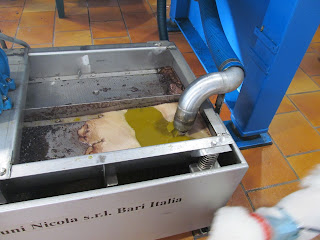 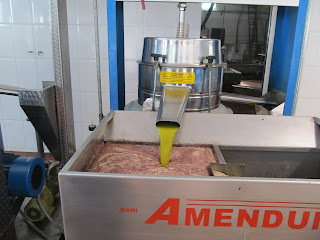 Spain What is a Technobilly?