- December 01, 2012
They say that domestic dogs are 99% wolf.  Even silly breeds like Fergus.  Well obviously that 1% accounts for a great deal. 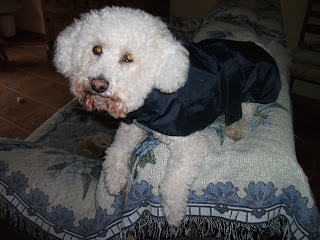 Our neighbour across the street has a little pack of three sausage dogs (crossed with something else). 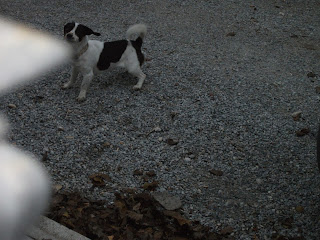 Well they didn't take too kindly to a new dog in town.  Poor Fergus was minding his own business having a good sniff when out of nowhere I saw a flash of brown heading towards him.  The next thing, there was a terrible squealing from Fergus, and a mad rush of the rest of the pack all growling and barking ferociously. 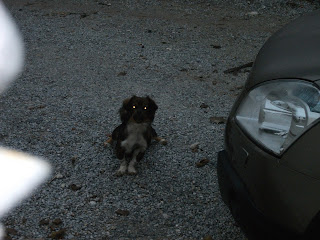 I couldn't get to Fergus quick enough and he was definitely bitten but thankfully not bad enough to draw blood.  They were, after all, just defending their territory.

As a sort of add on to their pack is Brown Dog.  This photo doesn't do him justice but he won't stand still! 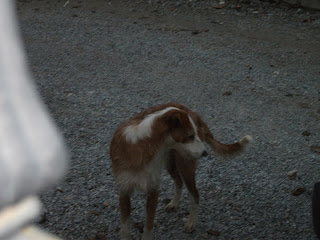 He is a feral dog.  A stray.  People throw out food for him but don't give him shelter and it is really quite heart wrenching to come out of a morning to see him soaking wet and shivering, knowing that he spent the whole night outside.  He, unlike the pack of sausage dogs, is very friendly towards Fergus... but won't come close to us.  He has a friendly face and sympathetic eyes and wags his tail expectantly when we come out of the gate.  But I have to be strong.  I don't need another dog and I can't get upset about every stray... there are quite a few in the village.

After the sausage dog incident I take a sturdy stick with me on walks and growl as ferociously as I can at the pack... Fergus has become a bit braver and growls with me. 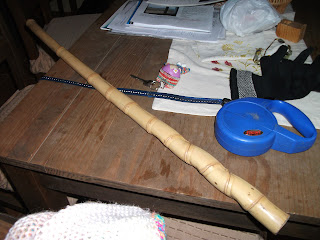 When we walk around the village we walk in the road, not the pavement.  There is no traffic and although there is plenty dog poo on the roads, the pavements are reasonably clean (the Spanish ladies all sweep the paths and the street in front of their houses).  I think I am the only one who picks up the dog poo!   I rarely see anyone else walking a dog on a lead, mostly they seem to just open their doors and send the dogs out on their own... It's all very new and strange for both Fergus and me.  I can't say I feel entirely happy about it.  I don't enjoy my walks with the dog quite as much as I used to in England.  I am sure its only a matter of time until Fergus and I get used to it.
Spain The Dog