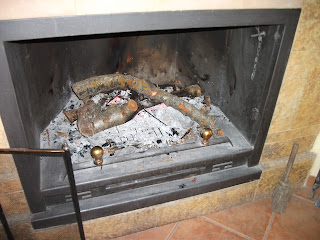 ....in the correct place at the correct time.  I had a coal fire when I lived in Scotland many years ago when my children were just little.  It was a lot of work.  I got up very early in the morning, while the children were still asleep, and in the cold (in my dressing gown) I cleaned out the cinders, brushed the fireplace and laid a new fire before lighting it and then washing the hearth clean of all the coal dust.  Lighting the fire was an art involving firelighters and rolled up newspaper as well as little sticks of kindling which I bought along with the coal.  If it wouldn't 'draw', that is, if the oxygen didn't get to the base of the fire and feed the flames they would go out, we sometimes used a large piece of newspaper across the front of the fireplace to encourage the flames to reach upwards for more air and hopefully catch the coal more firmly alight.  It was often disappointing and frustrating and took a considerable amount of time.

The wood fire is much easier.  But the routine is a little similar.  First thing I clean out the wood ash and then I use a firelighter and some kindling.  This is the kindling which I gathered for free while walking the dog in the countryside... which is of course just outside my back door. 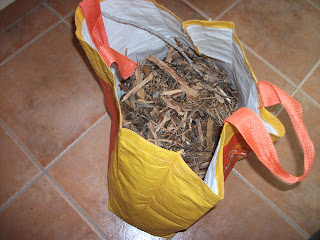 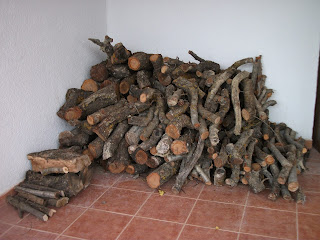 This is the wood pile under the house.  Its just a small woodpile and my daughter and I ordered one each from the Olive Oil factory in the village.  Later the same day a nice young chap turned up in digger and spilled the whole load over the fence into the garden.  No one said anything about money and I was a bit concerned that it would be expensive.  But not at all, we toodled along to the office (which is in a very large old Spanish house and joined a queue of people... we didn't know what they were going to pay for... if they sell olive oil and wood... I wonder what else they do?)  and were informed that we owed 56euros for the two loads of wood.  I don't know how long it will last, not the whole winter for sure but I will keep you updated on that.  I think it is quite cheap. 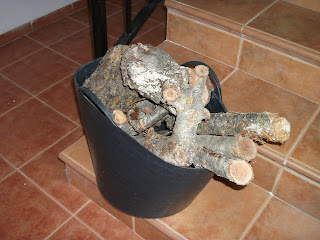 This is my log basket.  No, not a basket and not especially pretty but functional and cheap and has many uses should I decide to retire it from logging duties at sometime in the future.  All in all the process takes a matter of fifteen minutes from start to nice warm fire.  And so far I haven't had any instances of not getting it to light.  Of course an open fire is not as fuel efficient as a wood burning stove, but this isn't my house.  I have oil fired central heating too but it is renowned for being very expensive.  So I am trying to manage with only the fire.  All the radiators are turned off and the oil is only used for heating the hot water.  I suspect that as winter really sets in here I may well need to put the central heating on, and certainly when family visit at Christmas time, but I will try to last as long as possible without. 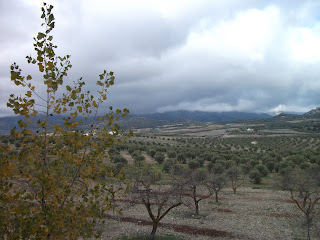 It rained last night and although we had a very bright start to the morning, more clouds have rolled in and it is now quite chilly outside so I am off to sit beside the fire and do some knitting... a scarf of course.