Showing posts from July, 2011
Show All

...that is the question.  And I have come to the decision NOT TO BLOG. I began asking myself why I blogged in the first place - and the truth is, partly, I wanted to share some of the things that I do with others because.. well I guess I thought my life was interesting... why wouldn't everyone else?  And because I fancied myself a writer... and because I often feel I have something important to say and everyone should listen... These are no longer good enough reasons for me to continue... if the blog was in any way therapy (and it could have been) then it has done it's job. Now I increasingly resent the time spent on the computer.  I also resent the fact that I find myself worrying about what to blog about next.  Which topics to include, which to let go.  Should I tell you all about the strings of garlic I have hanging in my shed?  Of which I am soooo proud... but surely the fact that I have grown enough garlic for a whole year (well almost) is reward enough... I don'
6 comments
Read more 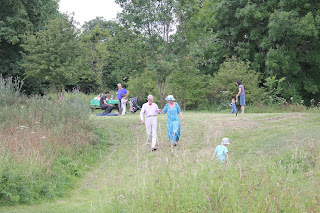 The old man was led into the forest and along a narrow track.  It was a beautiful day and the scene was accompanied by the music of thrumming insect wings, bees humming and birds singing.  There was no wind, not even a breath of air moving. The old man didn't have a clue where he was going and although very ancient, his mind was still sharp and he was full of anticipation and expecting something quite special. the path broadened out into a meadow by the banks of a pond where the wild ducks scattered at his approach and the dragonflies helicoptered above the still water.  This was a magical place - once the site of an abbey and it's fishponds, not even a single stone remained of the abbey, but the water and the reeds and the fish were still there. In the clearing the people had erected a tent and brought special food and drink for the ceremony. They dressed in ceremonial robes, some of which were very old - as old as the wizened old man. The ceremony be
2 comments
Read more
More posts