- May 23, 2011
Have you noticed how obsessed the British seem to be with cooking these days?  It's hard to believe that as a nation we used to have a reputation for bad food.  Even going back to my youth and the days of scampi and chips in a basket (still a favourite of mine) there were several european countries that served up the equivalent of road kill and called it haute cuisine, so I actually have my doubts about whether we deserved that reputation at all.

Well, to cut a long story short, Raymond Blanc's Kitchen Secrets is worth finding on iplayer if it is still there but certainly the recipes are worth looking up even if you can't watch the series.  One in particular intrigued me.  It came from the episode on charcuterie (or cold meats to plain speaking folk like me).  It's called Duck Ham.

The ingredients call for 2 large Magret duck breasts or 4 smaller ones. 100g of sea salt. 2 tsp black peppercorns, curshed, 4 sprigs of fresh thyme and 1 tsp of juniper berries, crushed.  There is a salad that goes with it but I shall dispense with that, those who are really keen might want to try and find the original recipe online or buy the book.

Unable to find the Magret Duck breast that the recipe called for, I used a pack of two duck breasts from co-op.  There was really not enough fat on them to follow the recipe properly - the skin was impossible to remove without taking the fat with it, so I left it intact.  You are supposed to slice off the skin leaving about 3mm in fat attached to the meat.  You then mix up the salt and spices and rub the mixture onto the duck breasts.  You then place them in a snug fitting container and pop it in the fridge overnight.  You turn the breasts after 12 hours and then leave them for a further 12 to cure.  After this you rinse the breasts under running water, pat them dry and then wrap in two layers of muslin, tie with string and hang for two weeks in the fridge. 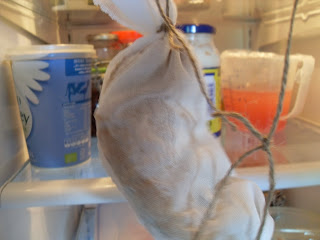 I did have my doubts when doing this, after all, it's raw duck and I was sure that it would go off.  Anyway, after soaking for 24 hours in the mixture of thyme and salt I then wrapped them in muslin and hung them in the fridge.

My fridge does not have a wire shelf so I fashioned one from a couple of tins with a wire cooling rack balanced on top.  There wasn't enough room to let the breasts hang downwards so they were hanging a bit like hammocks.  It meant the meat bent slightly in the middle but otherwise was the same as Monsieur Blanc's ones. 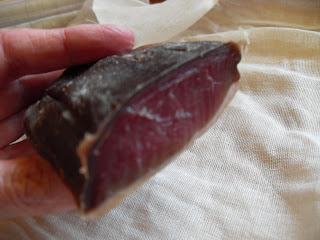 Two weeks passed during which time I worried about wasting my money on the duck breasts.  And then the day of eating came along and we sliced it as thin as possible and served it with crusty home made baguettes and salad.  OMG!  It was fabulous.  The sense of achievement was huge compared with the amount of expertise required to make them.  They were, unfortunately a little small but I consider that the trial run.  Next time I shall talk to the butcher about getting some decent sized duck breasts. 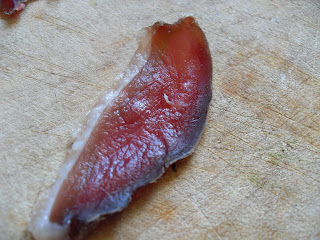