I've come over all Jane Austen!

- May 03, 2011
On Saturday we went to Bath.  I have been meaning to go for a very long time.  And it's not far, and so easy to get to by train, and has the attraction of a very good Fashion Museum.

We spent about three hours in the fashion museum - they are featuring a display of antique and vintage wedding dresses at the moment.  I am sure you are all totally up to the eyes with wedding dresses so I will say no more... just show you the pictures. 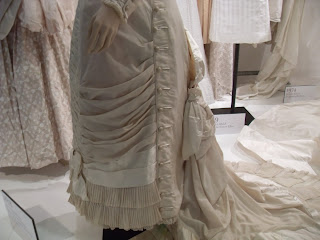 The historical clothing, dating back to the ridiculous court dress of the late 18th century, (I should laugh, you haven't seen what I wore in the 1970's) and continued on up to just a couple of years ago.  It was totally amazing.  I loved it.

The museum is housed in the Assembly Rooms - which was THE most fashionable place to hold a ball during the Regency era.  And indeed Jane Austen was reputed to have enjoyed many a twirl round this actual dance floor.

'Mrs Allen was so long in dressing, that they did not enter the ball-room till late. The season was full, the room crowded, and the two ladies squeezed in as well as they could. As for Mr Allen, he repaired directly to the card-room, and left them to enjoy a mob by themselves.'  Northanger Abbey, 1818

After the museum we spent half an hour or so in the Abbey - nattering about all the things we had seen and then reading some of the very sad memorials on the Abbey walls.  It seems the Great and the Good all came to Bath Spa in search of a cure for whatever illness they had.  They stayed for a long time and attending the Abbey church and making friends with other's formed a sort of community.  When eventually the cures failed and they died, the memorials were forthcoming.  We got the impression that Bath was the place to come to die, not the place to be cured, but of course those who were cured must have returned home and eventually would have been memorialised elsewhere.

We did not have time to visit anything else - I hate to rush around tourist attractions - so we are planning another trip later in the summer perhaps.  But needless to say I came home all inspired to do something Regency.  et voila....

It's a Reticule (great word) or handbag.  With the advent of the new classically inspired slim dresses of the Regency period, ladies no longer had anywhere to conceal pockets so little recepticles for their bits and bobs were required.  When I was a girl this shape of bag was called a Dolly Bag - not sure if there is another name for them.

Anyway... this is made from a pattern I formulated while unable to sleep and I am quite pleased with the way it has turned out.  Of course it is using up more vintage fabric from my seemingly never ending stash, so hasn't cost me anything but my time to make.

It requires a pale blue cord to close it and a little blue tassel for the bottom.

These items I do not have but will pick up at some point when I see them on sale or attached to something else at the charity shop.  So for now the reticule is unfinished and without purpose... and even when finished it may remain without purpose for a long time, no one seems to want Reticules any more, so I guess it will join the other one I made a few years ago.  Yep, I do this sort of thing from time to time and while sewing I usually imagine I can sell them, or sell the pattern and instructions to make them but realistically no one wants them.  A bit sad really - I wish I was as enthused by modern fashions as I am about the vintage stuff.  Sigh.  Does anyone want a Reticule?
Crafts History Sewing