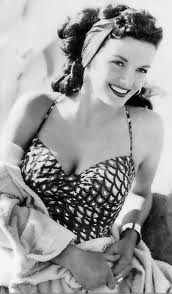 Jane Russell who died yesterday aged 89.
You see, when I was a teenager Jane Russell was no longer really in 'fashion', her large sexy curves had been replaced by the straight, waif-like silhouette of Twiggy.  Well, fashions come and go and its only when you get older that you realise it's a question of timing and there is little you can do about it...

When I was 18 I was shaped more like Jane Russell than Twiggy.  Am I boasting?  No, I was large in the bust, tiny in the waist and even larger in the hip and bottom department.  Of course I didn't have Jane Russells face to go with it, but even if I had, I doubt that it would have made me more attractive in the eyes of the world... our tv screens were full of long skinny bints and I spent a lot of my time agonising over not being the right shape, not fitting into the fashionable clothes and you know how important self image is when you are a teenager.  It was not a happy time for me.

I survived - always slightly out of step with fashion (still am).  Never really embracing and relishing all my assets (ditto).  Jane Russell survived too, poor Marilyn didn't make it.  So here's to the curviest of the curvy at a time when curvy was in fashion.

Jane Russell 1921 - 2011 Rest in Peace.
History life the universe and all that Teenagers