- February 22, 2011
I am getting hooked by all things mechanical.  First it was the hand crank sewing machine and now... well here is another 'old girl' who has crept into my heart. 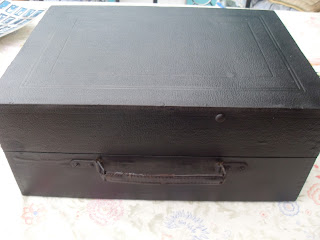 What do you think she is? 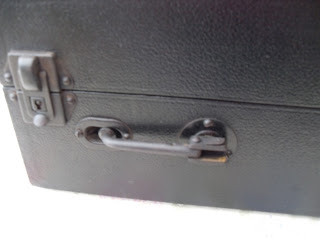 It is a Columbia Grafanola 109a Wind Up Gramaphone. 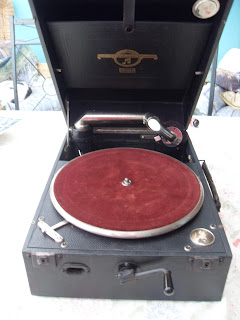 And here are the records to play on her. I got 45 of them along with the gramaphone. 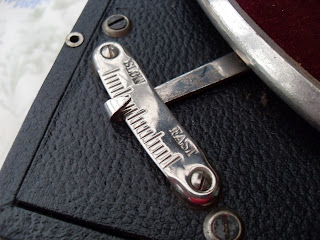 They play at 78rpm - if they play at all.  When they first arrived they were really dirty and the dirt in the grooves slowed down the record speed making them sound awful, a quick clean with my old friend WD40 and bobs your uncle....

... the sound is never going to be of cd quality.  Even with a beautifully clean and unscratched record there is always the hiss and crackle of fish frying in the background, but for me, this adds to the charm of the music somehow.  And do you know what has happened?  The music has suddenly become centre stage again.  When I play the gramaphone records, I don't just hit the button and go off about my business with the music in the background... oh no, I watch the record turning and I sit or stand to listen to it and we have some wonderful classics such as 'by the Light of the Silvery Moon' sung by Doris Day along with some jazz classics from Teddy Foster and His Kings of Swing.  Remember him?  No?  me neither!  Good stuff though!  Oooh and there's Geraldo and the Savoy Hotel Orchestra - absolutely wonderful stuff!

Columbia is a Picnic Gramaphone.  So-called for obvious reasons, I think, mainly that she is portable and because of this I have such plans for her.  More about those in a minute.  She dates from around 1926 to 1928.  She is a little like the sewing machines in as much as you can still find parts for her, but they don't tend to fare as well as the sewing machines have done.  There are not so many around in good usable condition.  How did I get her?  Well ebay is a wonderful thing - and also a really bad thing.  I raided the house to find stuff to sell on ebay and made quite a bit of money (with a view to putting it into the Portugal fund) and then I came across some old classical 78's that I had languishing in the bottom of a cupboard - unable to play them, I thought I would put them on ebay.  But then I discovered that the records don't actually sell for very much and they are really heavy making the postage stupid.  So I started looking for a gramaphone so that I could play them... and well ... the result is here to see.

These are the needles - basically little steel nails with pointed tips. 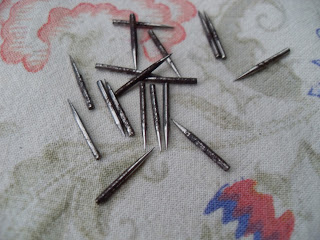 The ones that came with the gramaphone are all rusty but I chose the least rusty of them all and had a go with it (I had to test the gramaphone didn't I?)  it was only on a record that I don't like and don't mind if it gets ruined.  The result?  Well apart from the record being really dirty and slowing down the needle it was really LOUD!  There is no volume control on this thing either.  Apparently you can buy 'soft tone' needles which are less loud - but they are becoming quite rare so I had to order the medium ones.  Oh those old guys in the 1920's really knew how to bash out the sound.

This is where you store the needles so that they are ready for use, just where you need them.

The needles need replacing every couple of records or you risk doing damage to the groove (oooh all those old phrases just come right on back - groovy man!)  Luckily you can still buy new needles relatively easily and cheaply.  I bought 300 for a tenner.  That should do at least one picnic.  ah.... I haven't told you about the picnic yet have I? 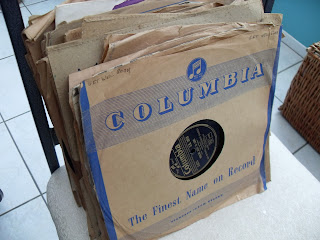 I am planning a picnic this summer to celebrate my father's 88th birthday.  Complete with 1920's costumes and the gramaphone and records. so I am on the lookout for more jazz, swing and big band 78's, this being my father's favourite kind of music.  I plan to put a notice in the village post office to ask if anyone has some that they would like to sell/donate - the going rate seems to be about 50p to £1 per record depending upon who the artist is.  There are more expensive one's on ebay but they don't seem to sell - ever.  I've been watching.  Anyway, I don't want to pay postage and then risk them breaking - they are rather fragile.

Right now I am waiting for the afternoon so that I can play some more records - it's too loud for the morning when it's half term and the young people are still in bed!  Oh crap I can't wait... come on lets hear some Bing Crosby... played loud.... Oh no, wait, there's a Dean Martin one.....yeah.... groovy.
music Steampunk