- February 20, 2011
I'm a BIG fan of the Romantic costume era (actually I am a big fan of almost any costume era) and I love to see and feel wonderful fabrics and beautiful colours and textures.  I was a little suprised by this one though. 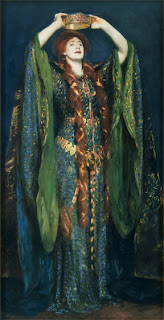 This is a painting by John Singer Sargent of Ellen Terry, a famous actress of the late Victorian era, wearing a fabulous dress made from the wings of beetles.

What's more, the dress is in danger of falling apart - the beetle wings are fine... it's the stitching that's disintegrating and needs to be repaired.  The National Trust are the proud owners of the dress, inherited by them in 1928 along with the house where Ellen Terry lived.  Plans are afoot to raise money to do the conservation work on the dress at Smallhythe Place, Kent

When Ellen starred alongside Henry Irving in Macbeth in 1888, there was not a wide choice of fabrics available in England, and Alice (Alice Comyns Carr - Ellen terry's dress designer) could not find the colours she wanted to achieve her effects. She wanted one dress to ‘look as much like soft chain armour as I could, and yet have something that would give the appearance of the scales of a serpent.’ (Mrs. J. Comyns Carr’s 'Reminiscences'. London: Hutchinson, 1926) Mrs Nettleship found a twist of soft green silk and blue tinsel in Bohemia and this was crocheted to achieve the chain mail effect.

The dress hung beautifully but: ‘we did not think that it was brilliant enough, so it was sewn all over with real green beetle wings, and a narrow border in Celtic designs, worked out in rubies and diamonds, hemmed all the edges. To this was added a cloak of shot velvet in heather tones, upon which great griffins were embroidered in flame-coloured tinsel. The wimple, or veil, was held in place by a circlet of rubines, and two long plaits twisted with gold hung to her knees.’

Here is a detail, not from this particular dress, but from a similar fabric made around 1880. 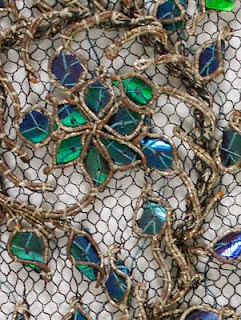 This piece may have been a sample made for the export trade. It was part of a consignment of 37 cases and packages shipped from Bombay by Henry King & Co on the SS Darlington in June 1882 and would probably have been sent by railway from Madras. Beetle wing embroidery became fashionable in Europe in the 19th century. It was usually done in India, but sometimes in Europe using imported cut and pierced sections of beetle wing. It was incorporated in spectacular dresses worn by women who had lived in India like Lady Russell and Lady Curzon, wife of the Viceroy, whose dress made by the couturier Worth in Paris for the 1902 Delhi Durbar (now in Kedleston Hall, Derbyshire), incorporated Indian beetle wing embroidery - and called the peacock gown.  I have seen several pictures of this dress and it is not the irridescant green of the Ellen Terry dress, but a much paler golden brown colour.  Perhaps a different type of beetle was used? 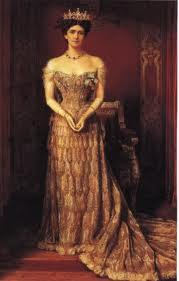 This little thumbnail shows the golden glint of it much better than the full length version... I expect it is fabulous in the flesh... since it looks very much like the beetle casings do not deteriorate with age.

Here is the beetle himself, or herself... They are abundant in India where...

...they live for about three weeks and are allowed to complete their lifecycle before the wing cases are plucked off and used as decorations for fabric and jewellery.  Now is it right that we should use them like this?  And if so (cos we don't actually kill them for their wing cases) can we stretch it to mink farms?  Where the animals are bred solely for the skins in the same way we breed cows for milk or for meat?  Is there a fine line here.... and if so.... where does one draw it?
History life the universe and all that Sewing