- January 10, 2011
This is definitely the time of year for cosying up on the couch with a warm snuggly blanket.  I have some nice warm snuggly blankets but I have a tendency to feeling guilty if I snuggle for too long.  I start to feel like I have wasted valuable time when I could be doing something productive.  An elderly lady once said to me that she never sat down without having some kind of work in her hands - knitting or crochet or some hand sewing.  This comment haunts me a bit because I often sit down and do nothing when I have a work basket stuffed with unfinished projects that only require simple things like trimmings hand sewn or buttons sewn on... or the second sock waiting forlornly on the needles. 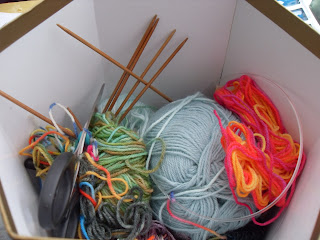 Since this is the time of year for getting on with stuff like this - once spring comes there is very little time away from the garden or allotments - I made a start on using up some of the old scraps of wool left over from larger projects.  But what to do with them?  I considered smaller projects like a tea cosy, it's on the list of 'to do's' but I want one that has a design on it, not just multi coloured left over pieces.  So I fell back on the old standby of crochet granny squares. 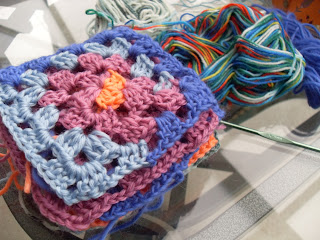 Not very modern.  Not especially exciting to do either, but very quick and easy.  I can manage to do four or five before I get bored and put it down.

While making them my mind wanders about a bit and during one of these musings I remembered an old lady I used to visit when I was 14 years old.  You see I was doing my bronze Duke of Edinburgh Award.  As part of this I had to visit an elderly lady in the community on a regular basis.  I went with another girl.  This very ancient woman spent her time crocheting granny squares which were given to some charity who sewed them into blankets.  I don't think she taught me to crochet the squares but I used to sit with her and do a few while we chatted.  My chum did not enjoy the visits.  We neither of us had any experience of elderly people and we found her wrinkled skin and odd 'elderly' ways a bit disconcerting. 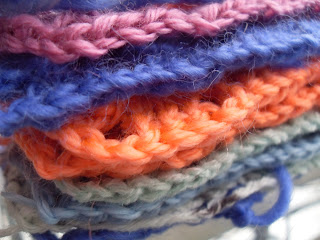 I decided that old people were not my thing at all but I found I enjoyed listening to some of her stories.  She had done such interesting things when she was young.  There was an amazing photograph on the wall of her with her husband, taken sometime during the 1920's in Africa.  Both her and her very young husband wore pith helmets and were stood with a couple of native africans.  Her husband had his foot on the head of a dead lion which he had just shot. 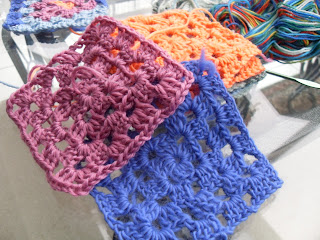 It was very much a relic from empire days and so was she.  Unfortunately she had a tendency to repeat the same tales over and over as if I had not heard them before.  My diligence wavered, my friend who came with me also faltered and we both missed a week.  Then I was on holiday for a week and then we went back to the house at the appointed time only to be told by a neighbour that the old lady had died.  She had no family and apart from the meals on wheels lady we had been her only visitors.  regrets?  Oh yes, I should have been more conscientious about my visits, but I was 14.  I never finished my award.  But I never forgot her photograph of the Lion kill.  Ah well back to the Granny Squares.
Crafts Family History life the universe and all that Sewing