Back in the Shoebox

- December 07, 2010
I could blog about the cold... and the snow... and the ice... and trying to walk the dog without falling over... and only just succeeding I might add... but I am sure there are a lot of blogs covering just these topics - and alot of places in the UK having worse snow than us here in Oxfordshire where the covering has been slight.  So... what have I been doing while the whole of the UK grinds to it's usual halt for the inclement weather?

I have been sewing. 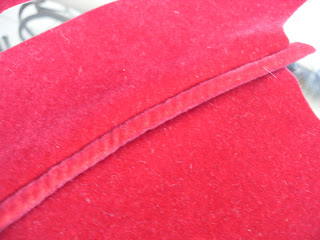 I am working on a new jacket to wear as part of my Victorian costuming outfit, I am being frugal and using old curtains in red velvet and lining it with an old cotton duvet cover in tartan. 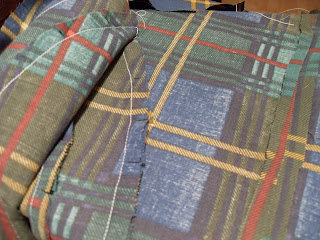 I always feel a cheapskate making my costumes out of curtain fabric and I used to dream of one day being able to afford to use new dress fabric instead, but I cheered up the other day when I read that the Victorians did not distinguish between fabrics intended for use on upholstery or curtains and that used for clothing.  Trimmings especially were identical, so it is in fact period correct to look like you are wearing a pair of curtains including the fringe and tassles! 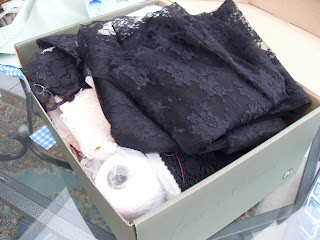 I needed some lace for the front of the jacket and so I pulled out my shoe box of lace trimmings.  Evidence of the kindness of other's, in donated pieces as well as overspending on my part, when something caught my eye and I couldn't resist. 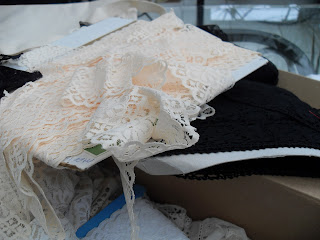 And here we have a piece from the bottom of a priest's cassock - donated by the lady who was making a new one. 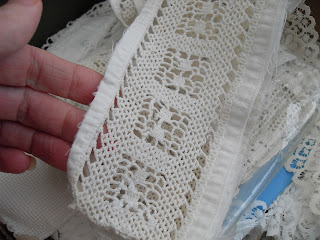 And then there is the two items I was given by a lady who, on hearing about my interest in period textiles, decided that I ought to have them.  The first is part of an edging for a tablecloth. 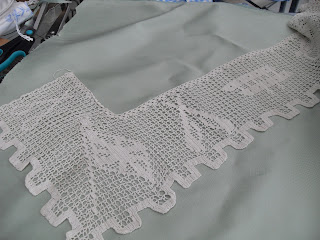 It was made during WW1 and shows the union flag and a symbol which I believe represents the Navy as well as a bi-plane and canons. 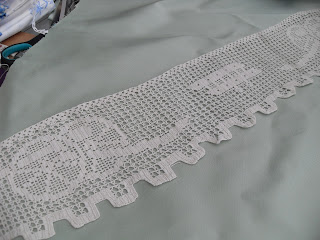 It's a very patriotic piece and I wish that it was the whole edging because I would happily provide the centre piece for it and use it on a regular basis. 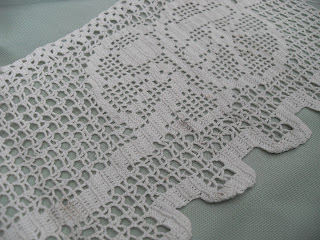 The other piece is the edging for a tray cloth. 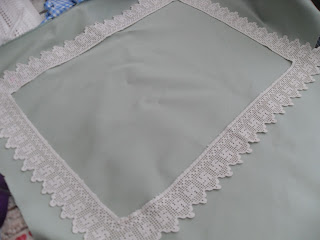 And it is whole so I could put a piece of linen or cotton in the centre and use it.  Except...wait a minute ... did you spot the pattern? 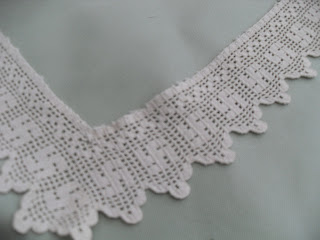 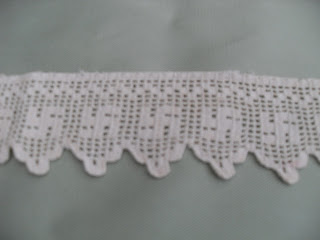 I was at first horrified.  And on questioning the donor of the lace discovered that it is in fact an Edwardian piece - made at around the same time as the first one.  The lady said she had a book as well that showed the pattern and the stitches which she promised to give me but then couldn't find it.  The pattern that we associate with Nazi Germany is in fact a much older design that is often found in Hindu art but in other cultures too.  There was some discussion about whether it is the direction in which the arms of the swastika point that denotes whether it is from WWII or not, but in actual fact I couldn't find any evidence of this... 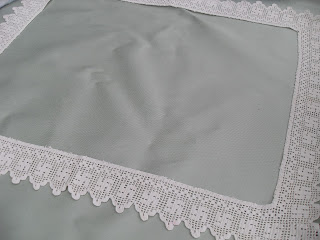 The upshot is... I cannot bring myself to put a centre in it and use it.... I mean can you imagine my serving tea to someone with a tray cloth like that?  I wonder how many generations it will take until the stigma of that symbol has dissapated?  So, in spite of the beautifully worked, neat and even crochet stitches, this piece will go back into the shoe box.
Clothes Crafts History Sewing What is a Technobilly?