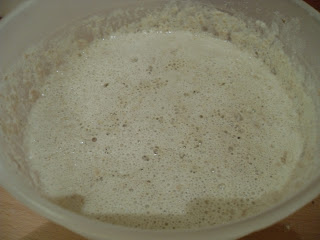 I should be more accurate and say 'they' live in my fridge because Fred isn't one single organism, he is
thousands of them.. he's a culture...  but he isn't very evolved so he couldn't be described as 'cultured'. 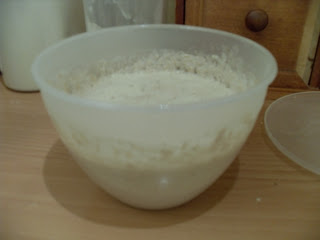 Fred and his kind are all the rage at the moment because he is used to make sourdough and since Hugh Fearnley Whittingstall featured bread and sourdough in particular on his river Cottage Everyday programme, Fred and his ilk are flavour of the month.  I got Fred from a baker who lives locally and all I have to do is keep him fed and he will live quite happily for ... well... forever.

Every week I use about half of Fred to make a sourdough loaf and then add some more flour and water and stir it in and Fred's colony rebuilds itself over the following week ready for me to take away half to make bread on a weekly basis.  Even if I am not making sourdough I still have to take away half the mixture and discard it, adding more food - flour and water and replacing him in the fridge where he will grow slowly (I wouldn't want Fred inventing the wheel now would I).  The bread made from Fred contains only wild yeasts and has a characteristically sour (ish) taste.  Its very good, although not yet as good as the one the baker gave me to taste, mine needs to age a bit yet.

This is one of Fred's friends (who also lives in the fridge) and is, like Fred, a culture.  And a very useful one at that.  He doesn't have a name.  Thank goodness for that I hear you chime. 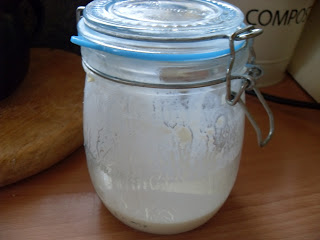 You will have guessed by now that both Fred and the nameless one are bacteria or germs.  Not only are they exceptionally useful and tasty but they (bacteria and germs as a whole) also build up our immune systems to fight off disease and other less friendly bacteria and germs.  So they are very welcome in my home and in my opinion should find an equal welcome in every home - especially those with growing children. 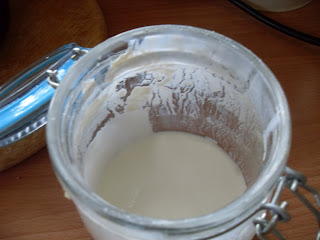 So why then do I see this? 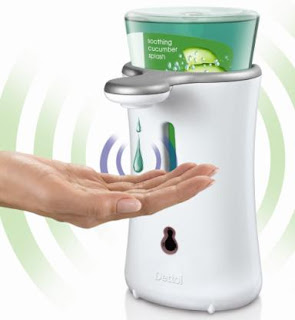 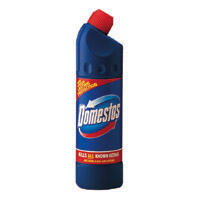 Our obsession with cleanliness (fuelled by profit seeking multi billion pound corporations) is at the root of some of our most pressing modern health concerns - allergies to be specific.  Increasingly, children no longer play in the dirt, making mud pies or eating worms, like they used to.  They also do not come into contact with animals or pets in the way that they used to.  They therefore are not giving their white blood cells any work to do, they are not building up immunities to life's normal run of the mill bacteria.  Is it any wonder that our immune systems get bored and decide that eating a peanut should have life threatening consequences.

I do not want to kill 99.9% of all germs or bacteria.  I use such products with extreme care, if at all.  I have to own up to having a bottle of bleach under the sink, but seriously, it has been there a long time and is still nearly half full.  Is my house hygeinic?  I like to think so, but perhaps not as much as Unilever would like.  We used to have a saying when I was a child... our house is clean enough to be hygeinic but dirty enough to be a home.  Does that mean my mother was making excuses for being a slovenly housewife?  Far from it, she embraced the cleanliness is next to Godliness doctrine with a vengeance and our house was spotless and not very homely at all.  An error that I corrected as soon as I had a home of my own.  So ladies (and gents) stop feeling guilty about the dirty kitchen floor - use that floor scrubbing time to do something more useful, make a loaf of bread!
Chit Chat Cooking life the universe and all that What is a Technobilly?