Getting up to Date

- November 08, 2010
I had so many posts planned, and took some photographs in expectation of several really good blog posts, alas... this is such a busy time of year.

I had not really thought about how much time everything takes.  I mean, it's all very well, setting out to be as self sufficient as possible.  Learning all the skills that will be necessary once we make our momentous move abroad.  Growing all our own food, learning how to preserve them for eating during the winter.  Re-learning old fashioned skills, knitting socks, making my own clothes, herbal remedies, soaps etc... but it's the amount of time that all of this takes.  My admiration for our ancestors grows with every task I attempt.

So, what have I been doing?  There was the mass of grapes... 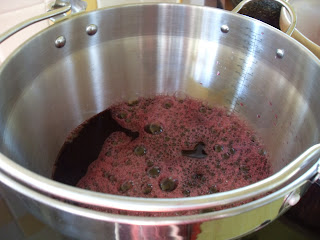 That we turned into juice.  It took 4 days to do half of them (the other half are vacuum packed and frozen for future use?)  Only 9 litres of juice but what a palaver! 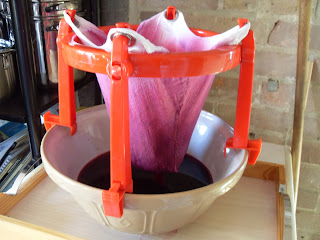 I washed the grapes and pulled them off the stalks.  I then brought them up to a gentle simmer in the pan with a little water and allowed them to cook slowly until soft.  I strained them through a jelly bag over night.  I tasted the juice (and if it needed added some castor sugar) and then heated it to 75C and then poured it into sterilised bottles which were then heated back up to 75C in a water bath and kept at that temperature for 30 minutes (to pasteurise the juice) and I then put on the brand new caps.  Left the bottles to cool, labelled and stored them away.  When you only have one jelly bag there is only so much juice you can do at one time... and as I have since discovered, the longer you leave the grapes, the more the natural sugars break down making the resultant juice sharp and not so sweet. 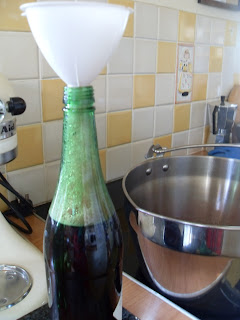 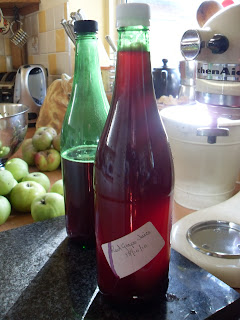 Then there was the attempt at making bacon.  I found a recipe for a wet cure for using on belly pork or shoulder.  I bought belly pork because it was cheaper. 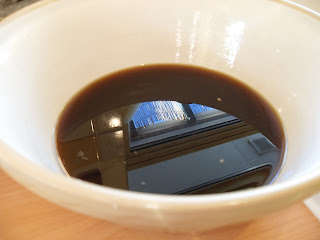 I mixed the wet cure and immersed the pork - leaving it in the fridge with a weight on top to ensure that it remained covered by the liquid. 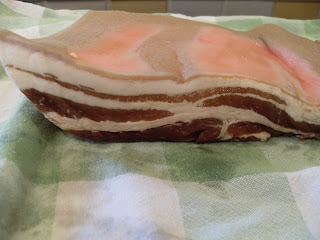 After four days I dried it and then sliced it into strips.  These turned out to be very streaky bacon and very difficult to slice (even with an electric slicer).  Anyway... in our house there are two of us who enjoy fat and two who can't bear it. 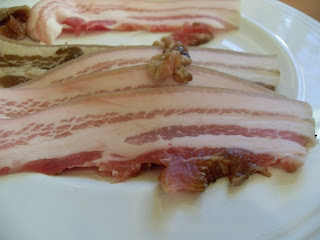 I fried up some of the bacon and OMG it was gorgeous.  The fat crisped up just like bacon used to in my childhood.  It was divine.  But like I said there were two happy faces and two rather grumpy ones.  Anyway since the wet cure is not very high in salt the bacon would not keep so I had to pack it into small amounts and freeze it.  I decided that I needed to buy shoulder pork the next time so that everyone could enjoy it.  Here it is fried along with the funny end bits that I turned into lardons. 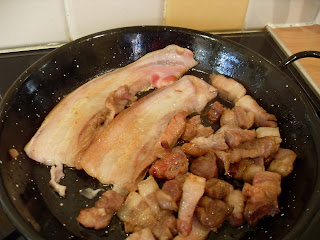 And then there was the mountain of Jerusalem Artichokes....  it's not just the wind that bothers me, it's the churning of the belly for about a week afterwards.  (I have three very large buckets full of them) I can't give enough of them away...


And then while walking the dog I noticed someone had put out a cooker and a microwave in the garden with a sign which said FREE.  And on top were these.... 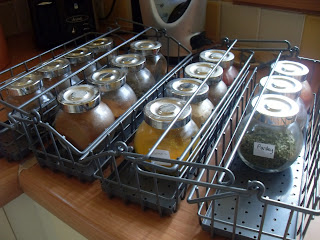 15 little herb jars from Ikea along with the trays for fixing to the inside of the cupboard.  I just had to take those home.  Now... what to put in them... and where to put them? 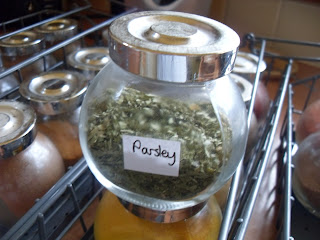 And the allotments... a certain amount of digging is required... and a certain amount was done but not enough by far.  I found a last courgette lurking under the soggy remains of courgette plant - and it was surprisingly dry and in good condition so we have well and truly extended the courgette season with trying out Mr Broccoli's courgette 'pudding' type dish. (Which was delicious by the way). 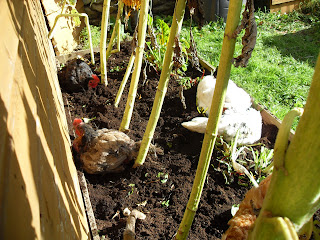 Out of sheer laziness we enlisted the help of our five feathery girls to clear the beds in the garden.  We don't grow over-winter produce in the garden so it's an annual treat to let them run loose among the beds clearing the last of the rainbow chard (that we are truly sick of) and eating all the slugs and snails that lurk in the nooks and crannies of the wooden edges.  The little bit of grass that we have is destined to be covered with gravel so we are veryhappy for them to scratch it all away - saves us having to remove it.  It is a treat to see them so happy.  Here is Wilma, head down, getting on with the business of grub finding! 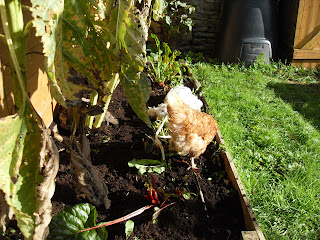 And thoughts turn to Yule and gifts to be made or bought.  Last year I made everyone socks and I started at the end of September and only just finished in time... this year I have been buying things from the charity shop - books mostly - and for my son's birthday I gave him a day of my time (still to be collected) at his house to cook, bake, clean or sew - whatever he wants me to do.  I suspect that I will be baking bread for the freezer, making cookies also for the freezer and possibly sewing curtains.

...And then... right out of the blue, something rather wonderful and scary and strange happened.  I got a job.  I wasn't even looking for a job and it doesn't start until next February but all the same... oh and it is my dream job by the way and even though it's only a couple of days a week - how will I fit everything in?  Oh I didn't tell you what the job is... I shall be working as a guide... here.
Chickens Chit Chat Cooking Festivals Gardening life the universe and all that What is a Technobilly?